A couple years ago while on one of our trips to Huntsville, my brother-in-law talked us into joining him and his friends in an escape room experience. It was a new form of entertainment popping up across the country with a focus on solving a range of puzzles in a designated amount of time in order to unlock a door to get out. (If that sounded like a mouthful then you already have an idea how crazy these experiences can be.) Each escape room is designed with a theme such as zombies, werewolves and mad scientists. I’m a puzzle fanatic and couldn’t resist.

The group was comprised of about 10 of us including aerospace engineers (you know, rocket scientists) and other brainy types. One member of our group is the person who designs the puzzle challenges at Gen Con so I was certain this would be a piece of cake. It wasn’t. We failed.

This past August at Gen Con, I was invited to grab a few friends and join the Spin Master team in a special escape room they had created right there on site. How could I resist the opportunity to get redemption for that prior loss? I gathered together a handful of family and friends and headed inside to discover our goal was to break out of jail by utilizing the clues found around the room. The catch: we only had a limited amount of time to get the job done and flee to safety.

With the help of my keen, strategy-minded, puzzle-solving daughters and a few friends, we managed to get out. It wasn’t easy though. It’s hard thinking straight and deciphering clues when the clock is quickly ticking away. The experience was actually one level of Spin Master’s Escape Room The Game brought to life. 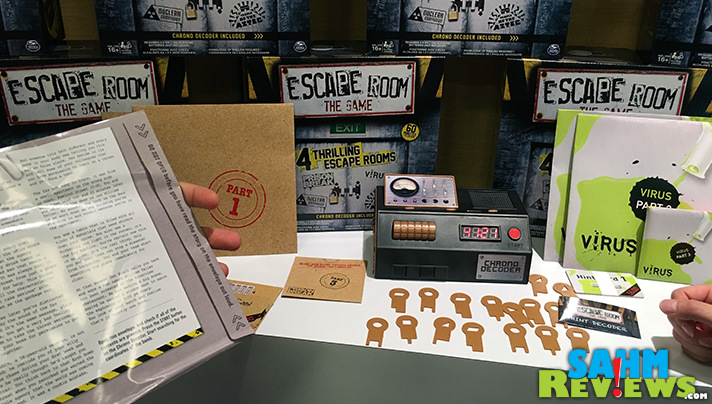 We continue to hear people talk about wanting to attend an Escape Room but talk themselves out of it for a number of reasons including cost, time restraint and coordinating enough people. Spin Master resolved many of those issues by creating a home version that is affordable (around $30!) and can be played in 60 minutes. Let me be more specific with that last part. In Escape Room The Game you only have 60 minutes to play because just like in a live-action version, the clock is ticking! What I find particularly appealing is there are 4 different scenarios of increasing difficulty built into this one $30 box. Prison Break (as modeled in the video) is the easiest, but by no means would I call it easy. Virus, Nuclear Countdown and Temple of the Aztec are the next three levels.

While the specifications state this is targeted at ages 16 and up, bright tweens and younger teens are perfectly capable of adding valued insight into solving the problems and escaping in the designated time frame.

We opened the first clues and started to evaluate what the answers could be. Between the four of us, we thought we had it figured out so we entered what we thought was the right code. It buzzed to tell us it was incorrect. I was pretty sure we wouldn’t need the hints, but I was wrong. We caved and took a hint in the beginning only to discover that we had already figured out that part of the clue! After struggling for a bit, we were finally able to get a hint that helped us resolve the puzzle. Then we moved on to part 2. 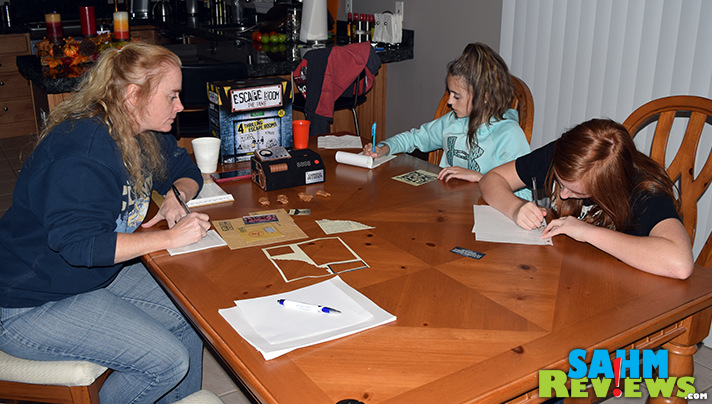 You know what? It is easier to solve when you open up all the sections for each part. We were several minutes into part 2 when we realized we hadn’t opened a poster that showed the entire jail cell, complete with lots of clues. I had left it in the stack with the phase 3 clues! When you play this, I highly encourage you to assign each phase of the scenario to a different person so they can each be responsible for opening everything necessary. 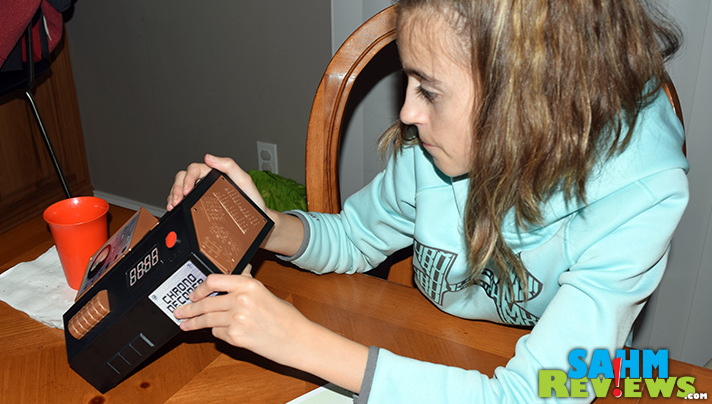 There are a couple things that are important to know. First, read all the directions. You need to know how the process works such as when you are able to use a hint. Second, the Chrono Decoder (the timer) is more than just a countdown clock. The unit itself contains ciphers for helping decode the clues. Third, share knowledge! Not only do you need to pass the clues around for everyone to examine but you also need to communicate what you think you figured out. Last, and most important, include everyone! Escape Room The Game is just like the live action versions where it’s a team effort. It’s no fun if you’re trying to escape alone.

I’m not going to tell you anything else about our experience because I don’t want to give anything away that might diminish your entertainment during your game. But four scenarios for multiple players all in one box for around $30… how can you beat that? You don’t have to be a game or puzzle fanatic to enjoy deciphering these games with a group of your favorite people.

Are you ready to try Escape Room The Game?

I was selected for this opportunity as a member of CLEVER and the content and opinions expressed here are all my own.

8 thoughts on “Can You Escape the Room in an Hour?”