With so many games releasing every year, it’s not uncommon for things to get confusing. Scott and I often will query one another to figure out the name of a game we have on our mind. We play so many games that sometimes I don’t even pay attention to the name of it and often just know which designer it was. As an example, a couple weekends ago we played Glass Road, but I went through the entire game not knowing the name of it. I simply knew it was the same designer as other games such as Cottage Garden, Agricola, A Feast for Odin and Le Havre. All of which I enjoy. There are a few games that I always refer to based on their unique game mechanics. So I feel like I have to give myself a little bit of a break when my brain confuses two similarly titled games. Thank goodness they play differently as is the case with Little Town from IELLO, not to be confused with Tiny Towns. 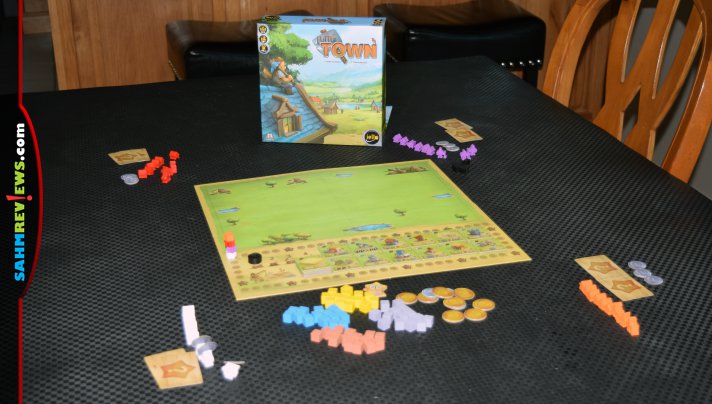 Little Town is a worker placement and tile laying game for 2-4 players. When you’re ready to play, place the board in the center of the table along with a general pool that consists of the resource cubes and coins. Shuffle the deck of objective cards and distribute based on the number of players. Everyone also selects a color and takes the  associated worker and house tokens as well as the victory point marker. As with the objective cards, the number of workers and houses each player will use is determined by the player count. The stack of building tiles are randomized and added to the board in the market area according to the instructions and game variant you want to take on. Those details are laid out in the gameplay aid as well as the instruction book. Give everyone three coins and assign a first player. 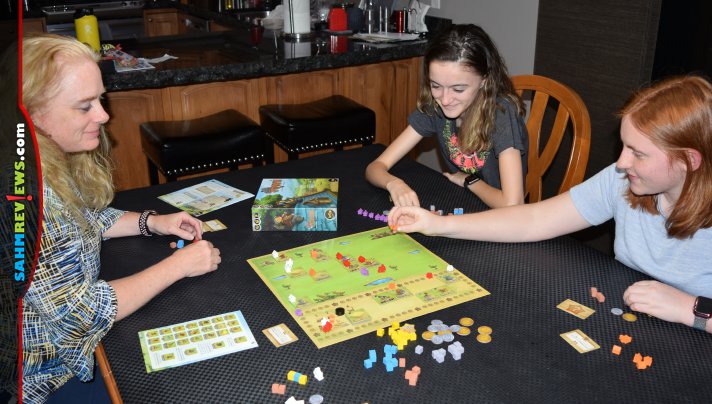 In a nutshell, you’ll be gathering resources and constructing building in order to score the most victory points by the end of the fourth round. Each round is controlled by the number of workers you have. When everyone has run out of workers, it’s time to move to the next round. 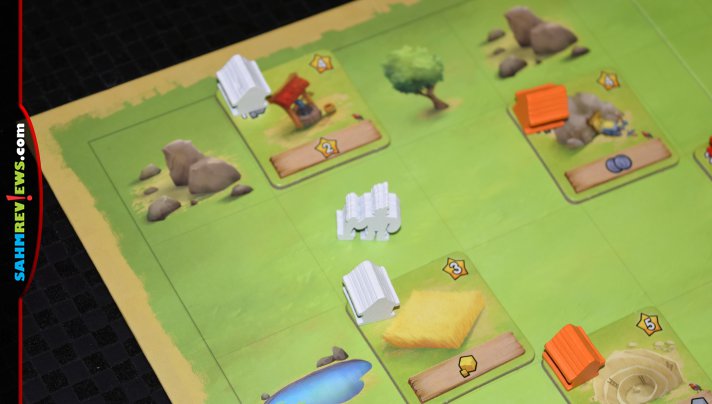 On your turn, you’ll be able to do one of two things, gather or build. You can place a worker in an empty grass space and gather resources for all the adjacent lots based on the terrain. Forests yield wood (duh) which are represented by the brown blocks. You’ll earn fish, the blue cubes, from lakes (makes sense, doesn’t it?). Mountains provide stone, the grey cubes. 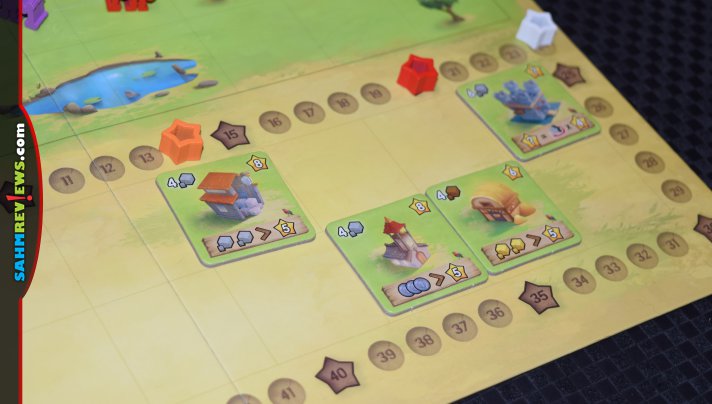 The final resource type, wheat, is acquired from a wheat field. Those aren’t natural to the landscape and become activate when someone constructs them. As an alternative to gathering resources, you can place your worker in an unused construction site space. Pay the resources noted on the upper left of the tile to construct that building (or field) in any empty grass space. Add one of your houses to the tile to indicate that you’re the property owner. 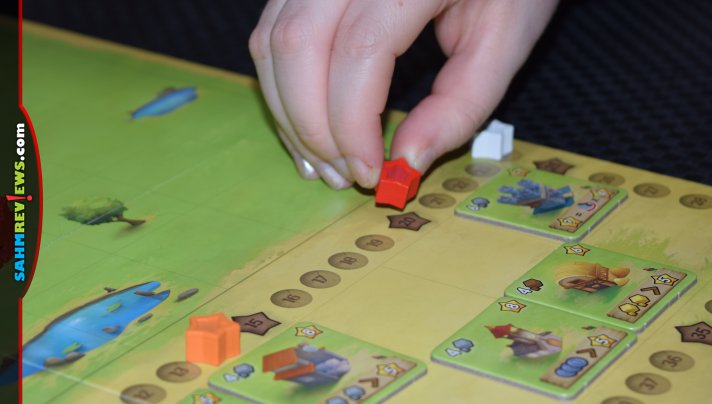 So let’s go back to the action of gathering. If one of the spaces adjacent to your worker is a field, you may opt to pay one coin to the property owner to activate that building. It may be a field that produces wheat, a shop that lets you purchase other resources or even a restaurant where you can turn wheat and fish into victory points. Once everyone has placed all their workers, you’ll close out the round by activating any special round-based buildings then you’ll feed all your workers. Discard one fish or wheat for each worker or lose three victory points for each you’re unable to accommodate. The first player rotates clockwise and the process begins again. 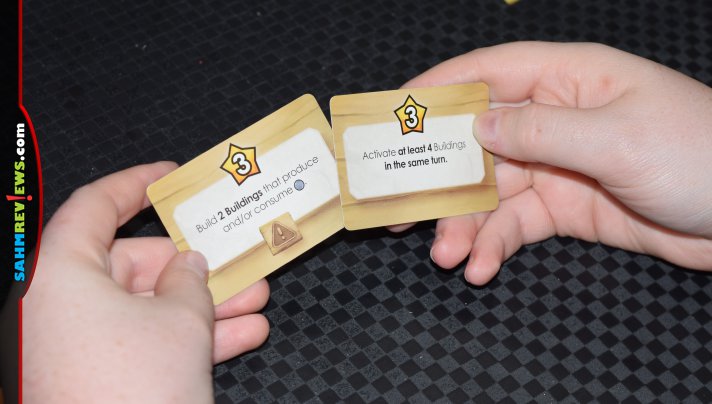 At any point during your turn, you may reveal your objective card and gain the corresponding victory points. You also may purchase a resource of your choice for three coins as long as you are able to spend that resource immediately.

The simplicity of the instructions and limited options for actions makes this an excellent family game. Not only does it implement a worker placement game mechanic, but also teaches about resource management. Available direct from IELLO, from your local game store or online retailer such as Amazon, Little Towns is an excellent stepping stone to more intense games such as Lorenzo il Magnifico or Everdell. We also appreciate that IELLO has provided a copy for one lucky reader. If you are ready to adventure to Little Town, enter to win the copy using the form below!