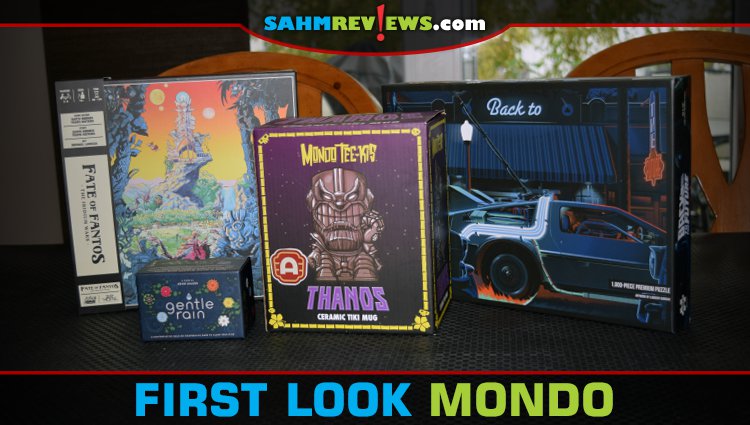 One of the things I missed about not being able to attend conventions last year is the opportunity to learn about new products as well as new-to-me companies. Sure, I subscribe to a lot of newsletters, see things on social media and read or watch videos so I learn about a lot. But there’s nothing quite like walking through a convention like Gen Con and discovering it all for yourself. Like this year, we found a couple companies that specialize in geeky tea and tea merchandise! Then there are cases where we’re familiar with a company, but unaware of the extent of their offerings. Such was the case with Mondo. We had no idea the amount of pop culture merchandise they have in their various product lines! They offer games, puzzles, vinyl (yes, those round things for music!), movie posters and other collectibles. Soooo many collectibles! So let’s go into a little more detail as we take a first look at Mondo.

It’s no secret that our specialty is games so that seems like the perfect place to start. Mondo has a handful of games in their lineup and they’re all very different. A Gentle Rain is more of a solitaire puzzle or cooperative game than anything else. It’s serene and relaxing. The object of the game is to assemble a grid where four squares have connected flowers. You draw one tile at a time then align it with flowers already in your tableau. If you cannot place it, the tile gets discarded, but if you are able to place it then you must.

If you create four complete flowers then you place one of the blossoms in the middle. It must be one of the four you’ve just completed. You’ll continue adding tiles until either all the tiles are gone or you’ve placed all eight blossoms. You tally your score based on how well you did. It’s mostly based on the luck of the draw and knowing what flowers aren’t next to each other on the tiles. Copies of A Gentle Rain are available on Amazon or direct from Mondo.

Mondo also has more strategic games such as Fate of Fantos: The Iridium Wars. It’s a tableau building game for 3-6 players with both competitive and cooperative aspects. Each player acts as individual Citadels, controlling resources, finding ways to protect themselves and facing the consequences of any damage they are causing.

There are opportunities for players to work together to resolve issues, but also options to simply go it alone. Players take multi-step turns that include things such as replenishing cards, harvesting, engaging in war, dealing with trials and hiring aid. There are ways to customize the difficulty and length of game, too. If this is more your style of game then order direct from the Mondo shop or ask about it at your local game store. Keep an eye on Amazon for it as well!

One thing I learned during this visit is that one of Mondo’s strengths is their connection to the movie industry. They produce a great deal of entertainment collectibles including. Their movie posters are so hot, they have a cult following of collectors gobbling them up within minutes of dropping on their website. In addition to movie posters, they sell a lot of vinyl. Their licensing deals in the entertainment industry has carved a path for them to release motion picture soundtracks in The Record Shop. While I love movie posters and appreciate the sound quality that comes from vinyl, my favorite surprise discovery was that they have puzzles!

We scored a Back to the Future 1000-piece puzzle while at Gen Con and I’m glad we did. Thanks to the pandemic, quarantine and supply chain issues, finding new puzzles can be challenging! While they have a lot of puzzles on their website, this isn’t one of them. If you fall in love with it, grab it from Amazon before it sells out. If you know someone who has a passion for puzzles and pop culture, point them to Amazon to see the variety of licensed puzzles from Mondo.

By now you can probably understand why I said that licensing is their sweet spot. In addition to the puzzles, games, records and posters, they also have a huge assortment of toys and collectibles such as action figures, apparel, enamel pins and Tiki mugs. If you’re a pin trader, then you know how exciting it is to find unique enamel pins, especially licensed ones! I absolutely love pins and collect them at conventions, during trips to Disney and wherever I can find them. While I don’t recall seeing the enamel pins at Gen Con, we couldn’t resist getting a Thanos Tiki mug because, you know, we’re kind of Marvel geeks like that. As you can see from the picture, these mugs aren’t small. Scott and Kennedy were talking about using it as a vase and putting flowers in it to match the Infinity Stones.

There’s a lot going on at Mondo and I haven’t even scratched the surface of what’s available in their Mondo Shop. All I can say is that you might find some unique gift ideas (for yourself or someone else) on their website or under their Amazon listings. And to think… we learned all of this because we stopped to talk to them while at Gen Con.

What’s something unexpected you discovered while attending a convention?