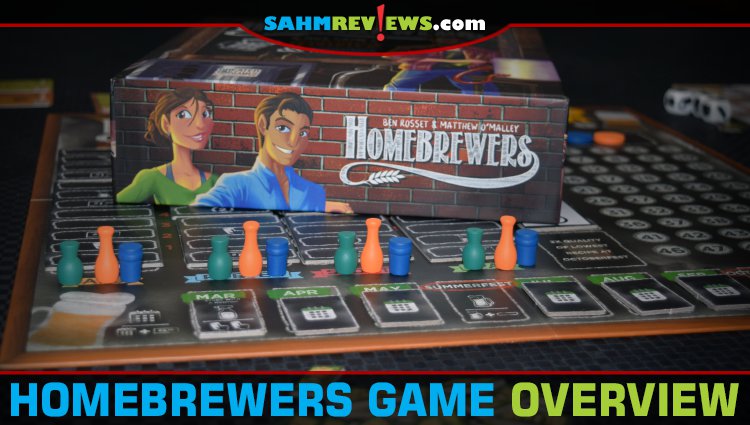 I’ve lost count of how many people have said that retirement isn’t what they expected. Without a regular schedule, boredom quickly sets in. Couple that with a pandemic and you have a combination that is far less than the thoughts of hanging out poolside sipping cocktails that people envision. My parents embraced the freedom that retirement offered by selling the acreage and building their dream home, traveling (pre-pandemic) and spending more time golfing. When lockdowns sidelined their normal plans, they looked for other forms of entertainment. As luck would have it, they were storing my brothers’ Christmas gift at their home and decided to commandeer it. They began making their own wine as gifts when entertaining or attending cocktail hour(s) with their close friends and neighbors. Homebrewers from Greater Than Games may be about a beer crafting club instead of wine, but I think of my parents every time I look at this dice game!

Homebrewers is designed for 2-5 players, with different setup options depending on player count and variability. As an example, if there are only two players, a set of cards is inserted into the game to simulate a third person. You can select individual character cards that implement asymmetric abilities or go with the standard garage where everyone has the same setup.

Shuffle the stacks of tiles (judging, quality and event) and flavor cards separately then randomly draw enough to fill the associated rows. Each player takes the tokens of their player color, three dice, $2, two flavor cards and two grain/trub tokens. In case you are curious, “trub” is the term used to refer to the sediment left in your equipment after you brew.

The game takes place over eight months which is tracked utilizing the calendar section of the board. Each month has a different event and is one of the potential actions you may choose on your turn. A month consists of a trade phase and an action phase. You’re ultimately trying to earn the highest reputation by meeting the tastes of the panel of judges as well as moving up the quality track for the four categories of beer.

The board is broken down into different sections along with separate individual player boards (garages) where you’ll do your brewing, Your individual brewing capacity and capabilities are limited by the flavor cards you acquire and how well your garage is sanitized. These are displayed on your individual board. Reputation track (scoring), quality track (for each type of beer), judging categories and events all appear on the main board. There’s a general supply of money and grain/trub tokens as well as a draw deck of flavor cards with four available cards faceup alongside it.

The trade phase represents the club meetings. During this phase, players simultaneously roll dice then propose trades to acquire the dice they need or want. There are five action types possible including Sanitize, Event, Gain Grain, Brew Beer and Flavor Card (2). Dice are traded one at a time and mutual trading continues until all players have committed all their dice to their garage. If you aren’t able to find someone to trade with, there are ways to reroll or change to the action of your choice.

Once everyone is done with the trading phase, players take all their actions starting with the first player and continuing clockwise. Each player is working individually to craft their own concoctions. If you select the spray bottle icon, you are choosing to sanitize your equipment. When brewing, you’ll advance the quality token based on the leftmost clean column in your garage so keeping your equipment sanitized will allow you to advance up the quality columns faster. The calendar is an indication that you would like to take that month’s event action. When you take the gain grain action, you collect a grain token from the general supply and place it on any of the recipe buckets in your garage.

The flavor card icon offers the most diversity in the game, allowing you to either draw or play a card when you take this action. Should you decide to play one, you have two options on how to proceed. Each flavor card is broken into two parts with the top representing an ingredient and the bottom displaying benefits such as gaining money, grain or sanitization. Discard it to earn the bottom benefit or slide it under one of the recipe slots in your garage.

Brewing beer is the final action option and this is where you receive credit for your hard work. Select one batch of any recipe where you have at least one grain token (ingredient), contingent on having at least one clean sanitization slot. Move your token up on the quality track based on your sanitization level, collecting bonuses when you pass or land on them in the track. As you near the top, you must always be able to move your token based on the sanitization level or you may not brew. So there may be instances where you’ll want a lower quality brew! Once you’ve moved up the track, flip the grain token to the trub side and immediately fill in a sanitization space. Gain any benefits displayed on the cards in your recipe as well.

Twice per game, there is a scoring round where players earn reputation for winning medals. In addition to reputation earned from the quality track, players who met the judge’s recipe requirements will earn additional during Octoberfest. After completion of the Octoberfest scoring, the player with the most reputation earns bragging rights as the best brewer in their club. While it seems like there is a lot going on, it’s not an overwhelming game. Despite the subject of beer, it’s actually something underaged kids could play. This could just as easily been adjusted to describe root beer or dessert recipes as beer so keep that in mind when trying to decide if your kids could play. Brew up some excitement for your next game night by adding Homebrewers and gourmet root beer to your Amazon cart. You can also look for copies of the game direct from Greater Than Games or at your local game store. Follow Greater Than Games on Facebook and Twitter to see what else they’re cooking up!

What unique ingredients would you add to your specialty brew?