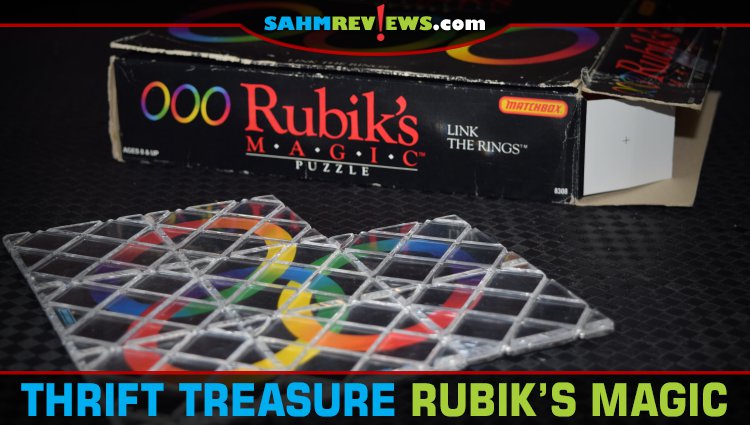 In the late 70’s and early 80’s, I was fascinated by the Rubik’s Cube. So was the entire world. While I loved to impress my high school classmates with the speed at which I could solve one, I must admit this was due to my mom buying me a book about it in seventh grade. I memorized all the patterns and could eventually get all six sides to match in around fifty seconds.

My senior year saw the release of a new puzzle challenge under the Rubik’s moniker – Rubik’s Magic. This was a vastly different puzzle in that it utilized a Jacob’s Ladder mechanism to flip plastic squares back and forth instead of rotating them around a center. The goal is to link the printed rings, much like the magic trick where a magician links seemingly solid metal rings by clanking them together in the air.

A Rubik’s Magic puzzle consists of eight plastic squares each featuring a piece or pieces of colorful rings. When new, the rings are unassembled and floating next to each other in a line. Your goal is to manipulate the puzzle until you create a heart shape with all three rings intersecting.

The puzzle converts from two dimensions to three on every move, and the instructions give you terrific tips on how to effectively manipulate the squares. While challenging, Rubik’s Magic does not have near as many unique combinations as the original cube. In fact, this version can be solved by expert puzzlers in under a second!

No longer published under the Rubik’s name, there are knockoffs available on Amazon. I prefer the original, which can be easily found on eBay for not much more! Let us know if you break into the top 100 in the world!

What’s your favorite non-cube version of a Rubik’s puzzle?