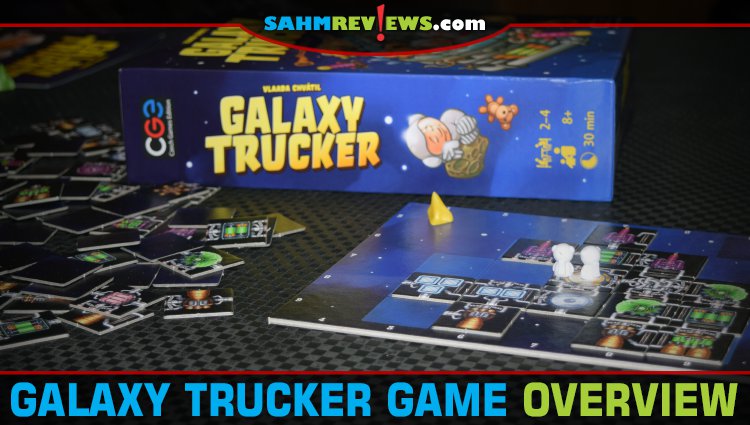 There are only a handful of games that I decline to play when offered and it typically stems from a bad first couple of experiences when first introduced to them. Most people are surprised by my very short list because they’re overwhelming favorites by so many people. They’re all really high quality, fun games, but I prefer to try games I’ve never played before than reinforce my original feelings about these. My inner circle is full aware of my short list, but I don’t share about them here because there is nothing wrong with these games. It’s 100% just me. When Czech Games Edition announced the revamp and re-release of Galaxy Trucker, I decided it was time to give it a second chance. So here we are…

In my original go-around with Galaxy Trucker, someone else taught how to play. I never saw the rule book. As I opened up the new version, I realized we were already off to a good start. It’s not comparable to the simple rules of Hues and Cues, but it’s certainly funny. The idea behind the game is that you’re a space trucker who is driving makeshift ships built out of Corporation Incorporated sewer pipes. Apparently that makes them less likely to be attacked by pirates. By incorporating adventure cards, aliens, advanced flight boards, trucker tiles and a timer, the game offers varying levels of difficulty. To keep things simple, we’re going to talk about the “student driver” version.

Create a face-down general pool of components within reach of all players and place the game board alongside it. Each player takes a ship board and their color choice of rockets and starting cabin. One rocket is placed on your individual ship board and the other on the flight board. The starting cabin gets installed in the center of your ship board.

Each turn isn’t even a turn as everyone is playing simultaneously. Using only one hand, you’ll be working as fast as you can to grab a tile, bring it to your board to inspect, decide if you’ll want to keep it or return it to the pile. You aren’t allowed to flip tiles in the middle of the table. They all must be brought back to your ship for evaluation. If you opt to install it then you’ll attach it to your ship. If you reject it then you’ll return it face-up to the pool. Of course, it isn’t as easy as just grabbing a piece and placing it on an open space on your board. You actually have to ensure everything is properly connected. If you are placing a tile that is adjacent to two already-existing components on your board, then all sides must make valid connections or your ship will fall apart! There are three types of connectors: universal, one-pipe and two-pipe. The universal ones can connect to any other type, but the single and doubles cannot be interchanged. Likewise, no connector may be alongside a tile with a blank edge! As I reacquainted myself with the game and the requirements to place pieces on the board, I remembered how hard it is to create the perfect ship!

There are an assortment of different types of components that provide different benefits. Cabins allow you to have a bigger crew. Engines make you go faster. Cannons help you defend yourself from meteors or who knows what else awaits you. Shield generators deflect smaller debris and enemy cannons. Some items require batteries so, of course, there are battery components. And naturally, cargo holds do as the name implies, hold goods. We are galaxy truckers so read into that what you will with respect to the necessity of carrying cargo.

There are a lot of rules with respect to how strong or vulnerable your ship is, but I’m not going into detail on those. Just finish building your ship as fast as you can with as few errors as possible so you can claim the first spot out into orbit! Once everyone is completed, you’ll prepare for launch by fixing broken components, add astronauts to the cabins, fuel the batteries using the battery tokens and create a pool of credits and goods. Shuffle the eight adventure cards to use as your adventure deck.

During flight, the adventure cards will be revealed and resolved one by one, beginning with the lead ship. You may earn credits or goods if the adventure cards are in your favor. If not, leadership may change and various hazards will cause damage to ships or loss of goods or crew. After all eight cards have been resolved, the flight is over.

Players sell their goods, earn points for the order they finish then earn awards or penalties for the quality of their ships. Whomever finished with 1 or more credits is a winner. Whomever had the most is extra winner-ish. Don’t say I didn’t already comment about the humor in the rulebook because I know I did.

Not only does Galaxy Trucker require you to think fast while building your ship, but you also have to be aware of what other players are doing. As we compiled our ships and dealt with the ramifications of damage from other ships, I remembered what didn’t work about it when I played before. It was the people. It was totally the people. After playing the revised version, it no longer is on my list of games I would avoid playing. It is, however, still on my list of games that require careful selection of opponents. If you enjoy games that require quick thinking, dexterity and have a bit of a puzzle-ish feel, give the new Galaxy Trucker a try. Put a copy in your cart the next time you place an Amazon order or look for it where you shop for games locally. Czech Games Edition has been compiling a lot of custom content about their games so be sure to join their communities on Facebook, Twitter and Instagram!

What game did you initially dismiss but later found enjoyable?