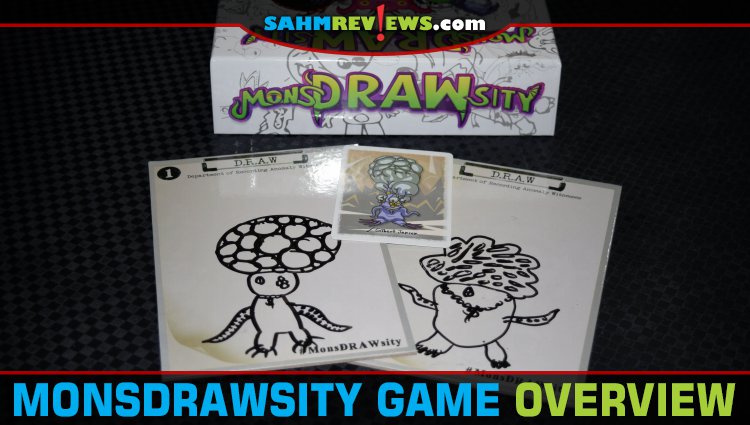 I love to write and have for as long as I can remember. The creativity of painting a picture with words has always appealed to me. It has always come easy once I had the idea of what to write about. So I’m completely baffled why I struggle when it comes to other forms of artistry. My girls have more musical talent in their little finger than I have in my entire body. And let’s not even discuss how limited my drawing skills are. On second thought, we need to discuss it since I’m planning to tell you about MonsDRAWsity, a drawing game from Deep Water Games.

There are a lot of drawing games on the market, but they often require some quick thinking and improv skills on top of some talent for drawing. What makes MonsDRAWsity different is that there’s an additional layer that you can blame if your work is awful. The idea of MonsDRAWsity is that there’s been a witness to an alien or monster in the area. The witness is attempting to describe the creature to the Department of Recording Anomaly Witnesses (D.R.A.W.) sketch artists. You’ll either be the witness and describe the monster or you’ll be a sketch artist who is drawing based on someone else’s recollection. To set up the game, give each player a drawing board and pen. Shuffle the deck of anomaly cards and place it in the center of the table. You’ll also need a timer, but it’s easiest for the witness to just use their phone.

The game takes place over several rounds based on the number of players. A round consists of one witness communicating about one monster. Each player will have the opportunity to become the witness two times. When everyone is ready, the witness takes a card from the deck, sets a 20 second timer then studies the image (without anyone else seeing it).

Once the timer goes off, the witness places the card face down in front of them, sets a timer for two minutes then begins to describe the image. There aren’t rules to what you can or cannot say, you just need to get people to draw it as close as possible. So imagine you are sitting in a police station trying to describe it to a sketch artist. Does it resemble some mix of creatures from this earth? How many legs does it have? What is unique about it?

You’ll have two minutes to convey as much information as possible. The only catch is that you cannot look at the card again. You’ll have to do it all by memory! The artists are allowed to ask questions so that helps. The fact that the witness is working from memory and artists are able to engage with questions actually is what makes this work for me. It doesn’t require adlibbing, just memory and makeshift drawings!

Once everyone is ready, the artists simultaneously hold up fingers to identify the number on the drawing pad they think is most accurate. No, you cannot vote for your own. The person who received the most votes gets a point. The witness reveals their vote and if it matches the majority, the witness also receives a point. If it doesn’t, the artist who they selected receives a point instead.

After everyone has been the witness twice, the points are tallied to determine the winner. Like most party games, it’s best with more people. But it’s also a great way to work on memory and communication skills regardless of the player count. If you’re looking for another party game to add to your stack with Hues and Cues, check out MonsDRAWsity. It’s available on Amazon along with some expansions. You can also look for it at your local game store. Learn about the expansions on the Deep Water Games website and follow them on social media (Facebook, Twitter) for details on other titles in their catalog. Keep watch for our upcoming party games gift guide, too. You might find something familiar on the list!

How well do you think you could describe something to a sketch artist?