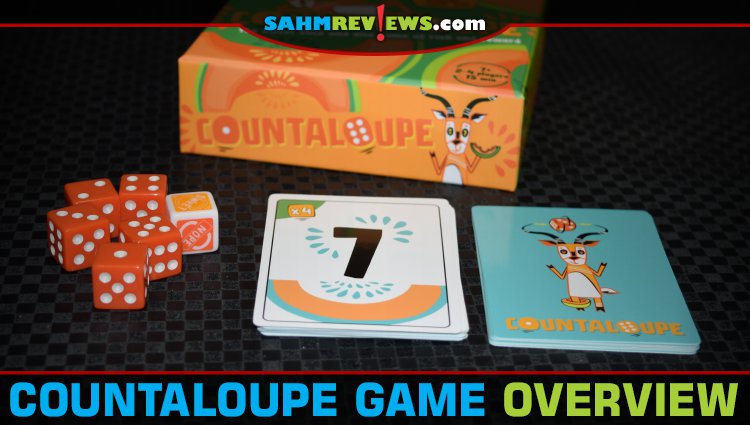 I never know what to expect when I come across a small game box. Sometimes it’s a very simple filler or family game. While other times, it packs the punch of a game that takes up more space on the shelf. We recently received Countaloupe from Bananagrams and I opened it up to get a feel for what kind of game it would be. I immediately thought to myself, “This looks like something you could play with a deck of cards and some dice.” But I’m not one to make assumptions so I kept reading the instructions. That’s when I realized I was totally incorrect as you’ll see here in a minute when I talk about the game. What I want to emphasize is that I know better than to pre-judge a game. I’ve been watching people make incorrect claims because they don’t realize that Hues and Cues is okay for people with color deficiencies. At a bare minimum, learn more about a any game before casting judgement because there are a lot of games I might not have discovered are excellent had I not given it a chance.

As you may have figured out from my initial reaction to the game’s contents, there isn’t much to setting up for a round of Countaloupe. Give each player their own color deck of cards, arranged from 1-16 with the stack being flipped so the #1 card is visible. Place the “Nope” token in the center of the table then give the dice to the first player. You should be up and running in minutes as long as nobody is arguing about who gets which color.

The object of the game is to be the first person to get rid of all the cards in their stack. It’s a quick game so if you plan to play multiple times, there are a couple ways you can plan it out. Either play multiple games determining a winner each time or award points at the end of each game to determine the winner of the overall session.

On your turn, you’ll look at the top card of your draw pile to determine how many dice you’ll be rolling that round. You’ll start with three number dice on lower valued cards then work your way up to five dice as you near the end of your stack. You’ll always roll the chance die regardless how many number ones you are instructed to roll.

Roll all the eligible dice and get ready to put your math skills to work. Begin by examining the Chance Die. If it’s blank, move on to the next step. If it reveals Sweet, Sour or Nope then you have different actions to take first. With Sweet, you have the option to either keep your own deck or swap decks with any other player. When Sour is rolled, you must swap your deck with the person who has the lowest valued card on the top of their draw deck. Nope allows you to take control of the Nope chip. More on that in a minute. Let’s talk about the rest of the numbered dice since that’s really the meat of this game.

If you see a die or combination thereof that total the value on the top of your stack, you may temporarily discard that card. Before moving along, look at the next card and do the same. You’ll continue this process, in consecutive order, until the dice don’t total the face-up card. So if you have a four on the top of your pile and you roll a pair of twos and a single three then you’ll be able to discard both the four and the five since you’re able to combine dice to get those totals. These are simple math calculations, but it’s a fun way to incorporate math into your game night (or incorporate games into your curriculum).

At that point, you may end your turn or press your luck and roll again. If you’re able to discard at least one additional card with the new roll then you may stop at any time. If not, you must return previously discarded cards to your draw pile. If your draw card is eight or below, you return all the cards. When your top draw card is nine or above, you’ll only be penalized for numbers in that range. In other words, eight is kind of a save point. The only way you fall back from an eight is if someone takes your deck and gives you a worse one… and that happens a lot.

So let’s get back to the Nope token. If that result appears on the Chance die then you’ll take the Nope token from wherever or whomever has it. When you are in possession of it, you may use it at any time to block another player’s ability to discard. Once the token is placed on a deck, it stays there until Nope is rolled on the Chance die again. As an alternative, you may reveal the token to stop a player from snagging your deck during a “Sweet” swap. The powers of the token are limited, however. It cannot be used to negate the effects of a Sour result. Most of the game revolves around the luck of the dice, but the Nope token adds a tiny bit of strategy to the game.

Countaloupe is a quick-paced game and as long as a child can add the pips to determine the totals (and match to the face-up card) then they should be able to grasp this game. This is one of the newest games from Bananagrams product line so availability may be limited. As of this time, you can find copies on Amazon as well as on their website. We encourage you to follow their social channels (Facebook, Twitter, Instagram) for updates or watch for it at Target, local games store and specialty stores that carry other products in the Bananagrams line.

Do you like when teachers utilize games in the classroom?