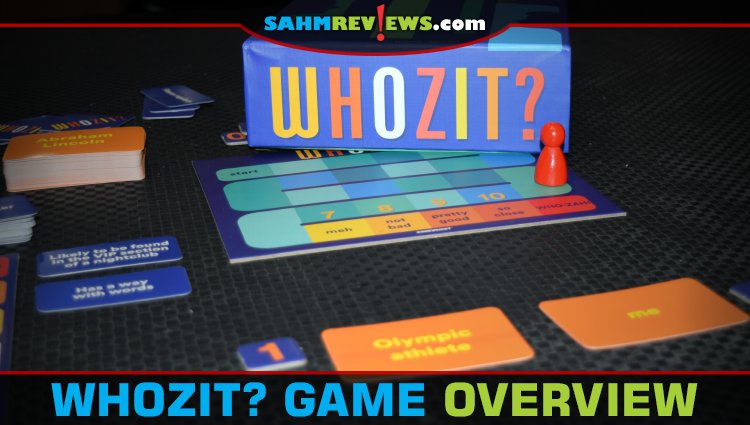 As the girls get busier and busier and Madison prepares to graduate and head off to college, Scott and I are realizing that our plans for playing games at home will dramatically change. We can still gather together with friends on weekends or maybe some days after work. The nightly games before or after dinner are pretty much a thing of the past. But I like cooperative games so I was intrigued by Whozit? from Gamewright. It looks like a party game and can incorporate multiple people, but as few as two can play! 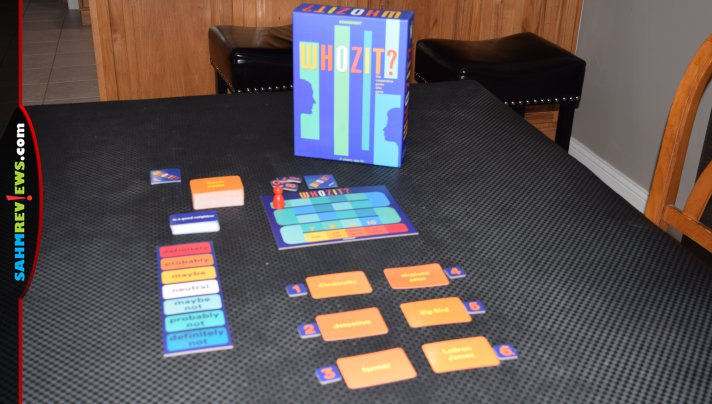 The object of the game is to work together to guess the mystery characters. Over the course of five rounds, you’ll take turn giving clues and eliminating as many incorrect answers as possible. Set up the game by placing the scoreboard (with token on start), clue meter and 1-6 number tokens in the center of the table. Separately shuffle the decks of cards separately then place the character deck near the board and the clue deck by the meter. The 7-10 number cards and tokens are set aside to be used in the fifth round of the game. 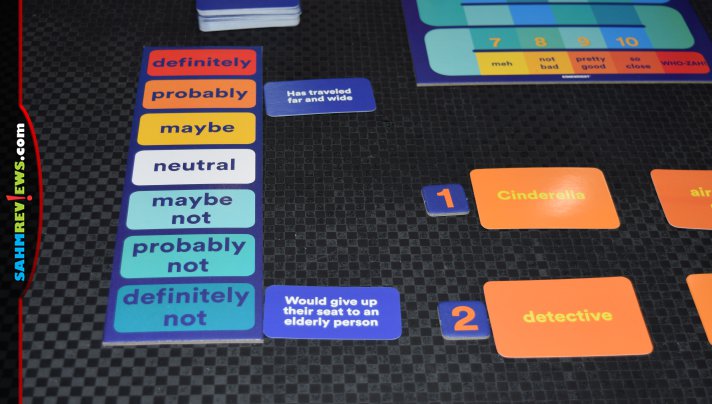 Select a Clue Giver to start the game and they’ll do the following actions: Draw six random character cards and place one near each of the six number tokens. Randomly draw one of the number cards to secretly determine what the target character is for the round. Take the top two clue cards from the draw deck and place them alongside the meter to help the rest of the team identify the secret character. 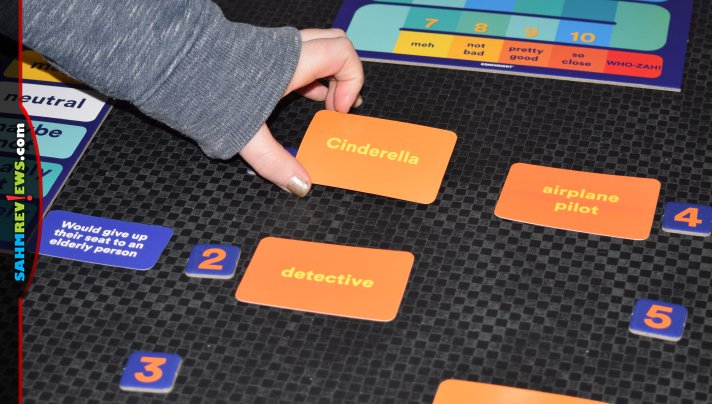 Now it’s time for everyone else to get to put their sleuthing skills to work. Instead of singling out the right answer, you’re trying to eliminate the incorrect ones first. Each guess is an opportunity to earn a point. The team talks about the six characters then selects one they think is not the secret one. If they’re correct, they earn a point and repeat the process.

The round ends when either the guessers successfully eliminate all the other characters or they’ve inadvertently selected the Clue Giver’s secret character. The player to the left of the current Clue Giver takes on the roll and a new round begins. At the beginning of the fifth round, the Clue Giver will select additional characters based on the number spot they have achieved on the scoreboard. (The team moves their pawn to the 10 square if they haven’t reached it yet.) One final Clue Giver is tasked with guiding the team to the finish line and a final rating ranging from Meh to WHO-ZAH!

The cooperative nature of Whozit? makes it a unique approach to a guessing game. Since there are 100 double-sided character cards and 50 clue cards, the game can be played multiple times before it starts to feel repetitive. You can add a copy of Whozit? to your cart the next time you’re shopping on Amazon or ask about availability the next time you’re at the local game store. This is the time of year that we usually start hearing about new releases so do some investigative work by visiting Gamewright on Facebook and Twitter!