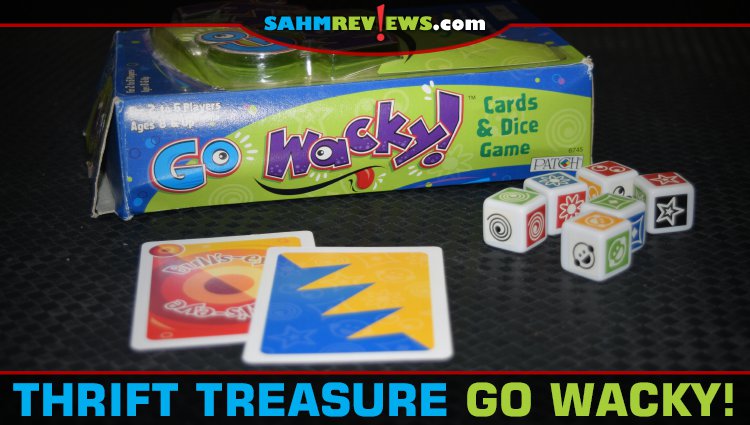 Over the years we’ve found quite a few variations of the game of UNO at our thrift stores. Not just official ones like UNO Madness or UNO Wild Tiles, but others that use similar mechanics with their own twist. Kaboodl and O’NO 99 come to mind. Coincidentally, last week’s Thrift Treasure, Zeus on the Loose, was a variation of O’NO 99! I guess it’s true when they say there are no new game ideas out there.

Patch Product’s Go Wacky! puts their own spin on the color-matching card game by adding dice to the mix. The first thing you’ll need to do when opening the box is to apply custom stickers to each of the six blank white dice. Each die will feature its own symbol presented in six distinct colors. The symbols are simply a way to remember which die belongs to a player. The colors on each side of the die match the different possible card colors with a couple extra for “misses”.

The deck of eighty-eight cards is shuffled and four dealt to each player (up to six may play Go Wacky!). The rest of the cards are set in the middle of the play area as a draw pile with one being turned over to begin the play pile. Each player also chooses one die to use for the game (remember your symbol!). The person to the immediate left of the dealer begins the game and play will pass to the left.

Word cards are what make this game wacky and can be played at any time if its color matches the top card in the play pile. Draw up to four in your hand at the end of your turn. If you cannot play a matching card, simply pass your turn by saying “pass”. If everyone passes in order, draw a new card from the deck and place it on top of the play pile to continue.

The Go Wacky! word cards all do something different. The “Everybody Go Wacky!” card has everyone rolling their die to be the first to match the color of the card. If you’re the first, shout the name of the color and take the card, creating your score pile. The player to your left takes the next turn, even if they weren’t next in order.

“Go Wacky!” is a similar card, except you will be the only one rolling your die. All other players in turn order will be counting “One Go Wacky!”, “Two Go Wacky!”, etc. while you try to match as many cards as you can. Start by matching the original color of the “Go Wacky!” card. If successful and time hasn’t run out (they will be counting to twenty), turn over the top card from the draw pile and try to match that one. When time runs out, that last card you were trying to match is put on top of the play pile. All cards successfully matched are put in your scoring pile.

When the “Round ‘n Round” card is played, draw cards to the center of the play area equaling the number of players. Starting with the person who played the card, each player will roll their die once trying to match one of the cards’ colors. If successful take that card to your scoring pile. Play continues in order until all cards are collected. Then the next player to the left of whomever claimed the last card continues with their normal turn.

Lastly, the “Bull’s-eye” card turns the game into a dexterity challenge. This card is placed in the center of the table and all players roll their dice from about a foot away trying to be closest to the center of the card. If no one gets their dice to touch the card, or there appears to be a tie, everyone rolls again. The person closest collects the card and the next player in clockwise order begins their turn.

As soon as the last card is taken from the draw pile, the game of Go Wacky! is over. Whomever has the most cards in their scoring pile is the winner! Originally published in 2005, you can find copies of Go Wacky! on eBay. We got lucky in that our thrift copy was brand new and never played. Maybe if you keep looking you can score one for a couple bucks too!

What game do you enjoy which uses both cards and dice?