Every year about this time we’re starting to get excited for our annual trip to St. Louis and the gaming convention held there. Geekway to the West has quickly become our favorite convention for actually playing board games. When we attend Gen Con or Origins Game Fair, our primary focus is bringing home the latest releases and finding out what’s in the pipeline. Rarely do we have enough time to actually play a full game of anything.

What makes Geekway so appealing? Each year they offer hundreds of games in their play-to-win program. Every attendee has a chance of taking home a game they check out and play for free! In addition, Geekway has an extensive curated library of games of all types. The hall is open 24 hours a day. Even if you could stay awake for all four days of gaming, you wouldn’t even scratch the surface of all the titles available to you.

One game we check out from the library each year is Qwixx by Gamewright. It’s a dice game where you’re trying to collect results in numerical order and is one we haven’t put in our collection (yet!). So it’s become a sort of tradition to play it between longer games at Geekway. We were excited to learn about a new version, creatively called “Qwixx Card Game”, and decided to pick that one up instead since we didn’t know if it would be in Geekway’s library or not. 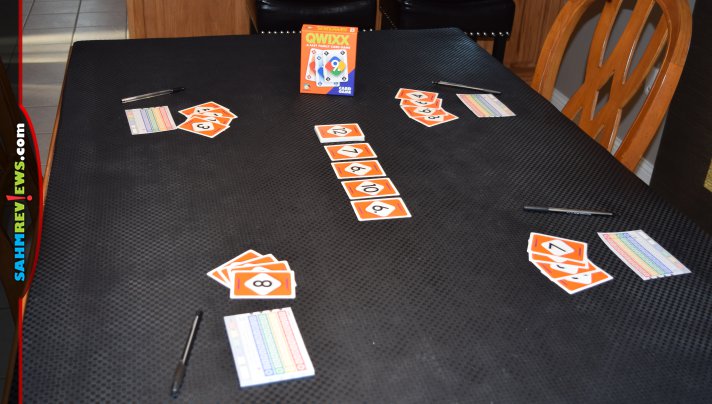 The premise behind the Qwixx Card Game is the same. It’s how you go about collecting the numbers that differs. Instead of dice, this version utilizes cards (duh) to randomize the distribution of colored numbers. Set up the game by giving each player a score sheet and something to write with. Shuffle the deck of 44 cards (one of each color numbered 2-12) and deal a hand of four to each player. Lastly, deal out a tableau of four cards to the center of the table and put the rest of the cards into a draw deck next to it. All cards, whether to a player’s hand or to the tableau, are dealt face-down (orange side up). You can see the colors of the cards in your own hand but none of the others. However, you’ll know the number of each card held by other players and on the table because the identical number is printed on the orange side! 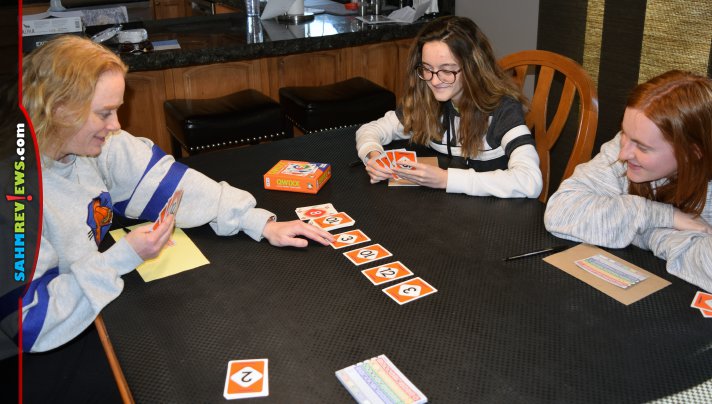 On the score sheet are four series of numbers, each in a different color. You are trying to check them off by playing cards with matching numbers and colors. The rule – you can only mark off numbers to the right of previously-marked numbers. This means that once you mark something off, you cannot go back and mark any to the left of it. Points at the end of the game will be awarded for how many you manage to check off of a color. 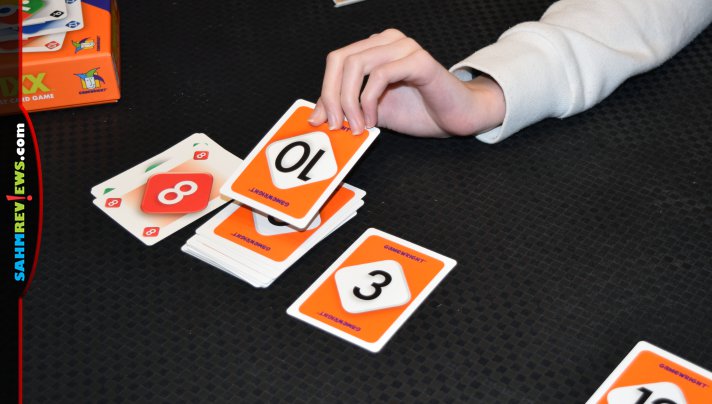 Each turn in Qwixx Card Game is made up of three phases. First, you’ll draw cards of your choice from the tableau until you have a hand of five. Once done, you will replenish the cards in the center by drawing from the deck, making sure not to reveal the color underneath. When the tableau is full, everyone takes note of the card remaining on the top of the draw deck. Using whatever number is displayed, all players may mark off that same numeral on their score sheet in any color. 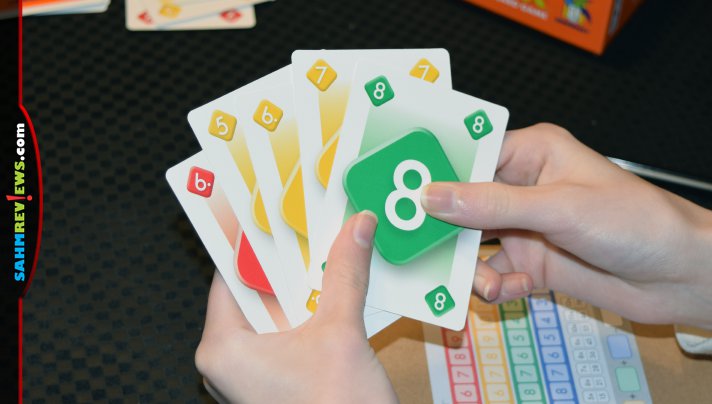 Lastly, you will play 1-3 cards from your hand of a matching color and mark off any matching on your score sheet. If you play multiple cards, the series may have no more than one missing number. Marking it off on your sheet is optional, but you’ll need to cross off at least one number from a card in your hand or one from phase two (the top card on the deck) or you’ll be forced to put an “X” through one of the penalty boxes. These are worth negative points at the end of the game and you only have four to use, so do so wisely.

If you have at least five numbers crossed out in a row, you can then cross off the final number and the lock symbol at the end if the card/number you need comes up. Players take turns until one person either fills in their fourth penalty box or crosses off the lock symbol on two of their rows. This ends the game immediately, even if in the middle of a turn. Points are awarded according to a chart on the score sheet, with the person having the highest overall total winning Qwixx Card Game! 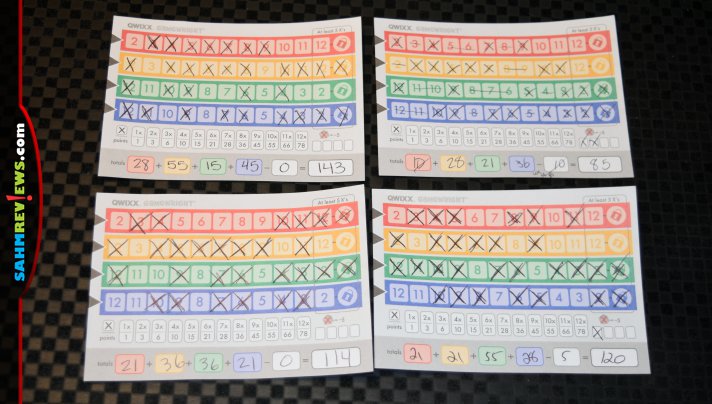 Qwixx supports up to five players and you can expect a full game to be played in around 15 minutes. Grab a copy on Amazon, direct from Gamewright or at your favorite local game store and don’t forget to pick up some extra score sheets (they’re compatible with BOTH versions!). Follow them on Facebook or Twitter to find out if they’ll be introducing anything else new in the Qwixx lineup!

Have you played either of the Qwixx games? Which do you prefer?