Home / Recreation / TV/Video / Details From The Set of The Catch 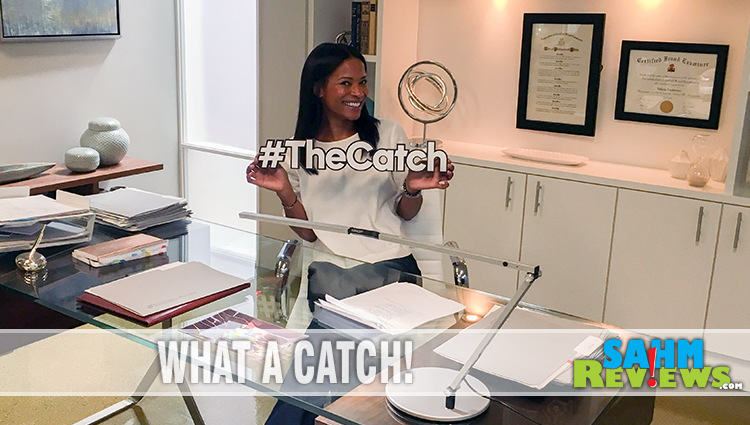 Details From The Set of The Catch

Following our trip to New York last summer, I was informed by my then-10 year old daughter that New York is where she plans to move, attend college and find a job in the fashion industry. If I said I was surprised by her proclamation, I would be lying. She’s always shown an interest in fashion design.

She may change her mind when I give her some details about life in the wardrobe department in the TV and Film Industry! A few weeks back I went behind-the-scenes on the set of The Catch on ABC, including some personal time with Costume Designer, Peggy Schnitzer. I had no idea all the details that go into creating the perfect outfits for the cast!

There’s so much I want to tell you about the show, about the set and especially about the wardrobe department. The only way I can roll through it all without feeling like I’m over-sharing is to give you the highlights.

Let’s start by talking about the show itself: The Catch. It’s a new hit that airs Thursdays at 10|9c on ABC. It’s about a private investigator, Alice Vaughan (played by Mireille Enos) who is scammed by a high-end con artist played by Peter Krause. He took her money, her client list and more then bailed. The story revolves around her interest in trying to bring him to justice but she is torn by her love for him… and his for her. There are twists and turns to the story that keep it interesting from week to week and make you second guess who you should be cheering for. 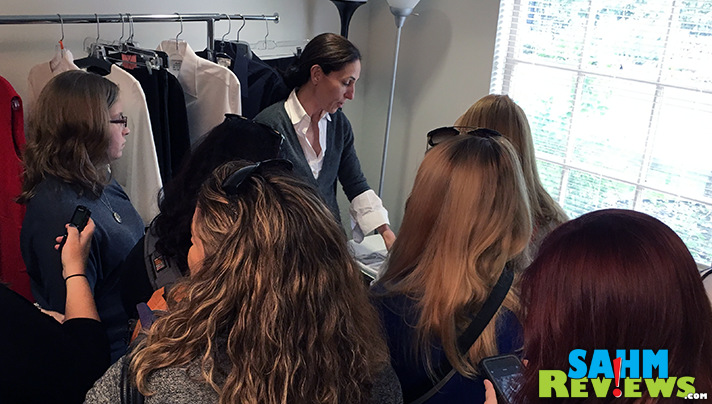 As we learned from costume designer, Peggy Schnitzer, the wardrobe department doesn’t simply outfit the characters. They plan, coordinate and document everything they do. The wardrobe department is often preparing the clothing for episodes prior to even receiving the script. When asked how they prepare for those unknowns, Peggy explained, “We do what is called closets…in the very beginning when you get the character and you get let’s say the pilot or the script, you start buying a lot of clothes like in anyone’s closet. You would get a certain amount of dresses, certain amount of skirts, jeans, you know, things that they would wear that while you’re shooting- so I don’t have to fit them every week…You sort of work it out with everyone else.” She showed us the base closet for each of the main characters and explained what they typically wear and why. As we looked around the room, we could see that outfits were packaged completely, right down to the socks.

They explained that the wardrobe team works long hours and is constantly looking for new outfits. Peggy designed the stunning wedding dress that can be seen in multiple episodes and her team including a full time tailor work constantly to keep the cast outfitted. If there is an outfit they want, the supporting (background) cast are dressed in outfits that make the main actor stand out. Outfits are often cataloged and stored in case they are needed in future episodes or seasons. 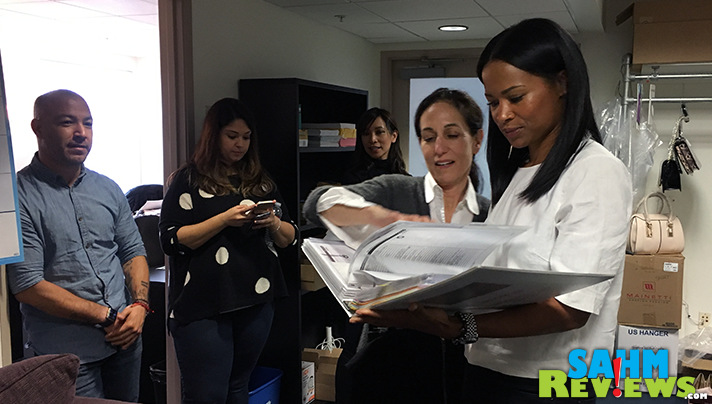 One of the most fascinating aspects of the department were the books they maintained for continuity. When scenes are filmed, they take photos and document everything making notes of even the smallest details. Not just of the main actors, but everyone in the scene. As an example, the way the actor was wearing their hair, jewelry, which outfit and all the accessories. Rose Rollins surprised us with her visit and she was learning right along with us. As Peggy explained the reasoning for the books, Rose said she was unaware of the purpose of all the photos that were taken. Peggy grabbed a book and proceeded to show her all the notes and photos. As you can see from the photo above, Rose is wearing a watch as well as a bracelet on the same hand. This was used as an example of why they document everything with photographs. If a scene needs to be reshot, they want to know whether Rose’s character had the watch closer to her wrist or the bracelet. As we learned during our meeting with Jenna Bans and the cast and producers from The Family, people notice when something is amiss. 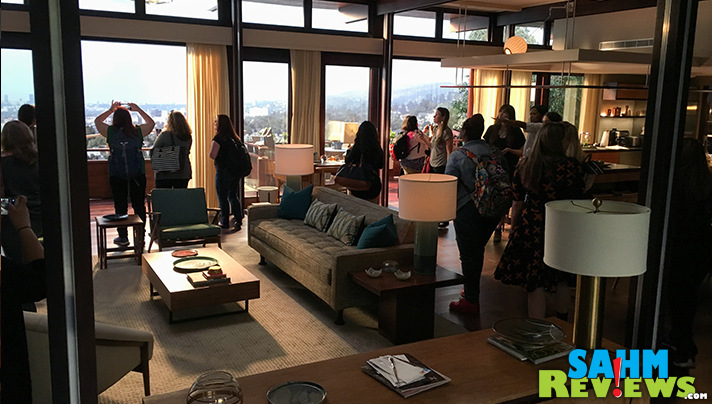 We started the tour in the wardrobe department and moved to the set of Alice’s home followed by the set of the Anderson Vaughan Investigations office. It was so interesting walking through the home and seeing the famous stolen picture on the wall, the kitchen where the lovers enjoyed dinner before the split and the view of the hills behind the home. 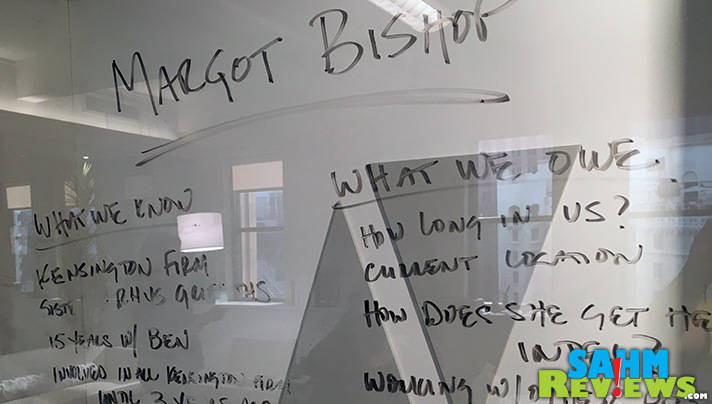 I was in awe as we moved into the office as we see that space regularly in every episode. It’s filled will glass walls and so many cool details. I walked into Alice’s office to discover notes on her investigation of Margot (played by Sonya Walger), another member of the con-artist team. The details were extremely interesting, with paperclips and rubber bands in a tray on Alice’s desk next to a notepad with her name on it. 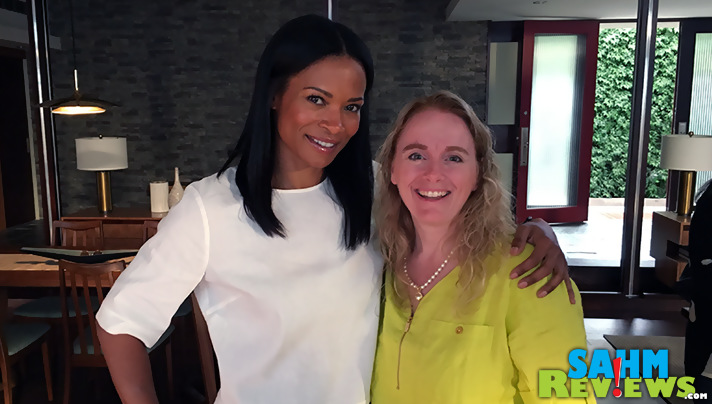 Rose Rollins, who made a surprise appearance in the wardrobe department, headed straight to the office marked “Valerie Anderson”, the character she plays on the show. We spoke with her on the importance of how shows are renewed. When asked if she knew whether the show would be renewed, Rose said they’ll find out in May. As we learned during our visit with The Family, it’s important to watch the show live or within 3 days if you DVR it. “Within three days…it does make a difference, it does make a difference…I actually know a lot of people who watch it on Hulu and it just doesn’t count.”

So if you love The Catch, be sure you watch it within the first three days if you aren’t watching it live. And remember that Hulu doesn’t count toward the Nielsen calculations. If you haven’t had a chance to watch it, check out the pilot and you’ll know right away if this is a show you’ll enjoy. When you do, join the rest of us on Thursdays 10|9c! Don’t forget to check out The Catch Facebook page for sneak clips and updates!

What do you think would be the coolest part of working in the wardrobe department?

9 comments on «Details From The Set of The Catch»