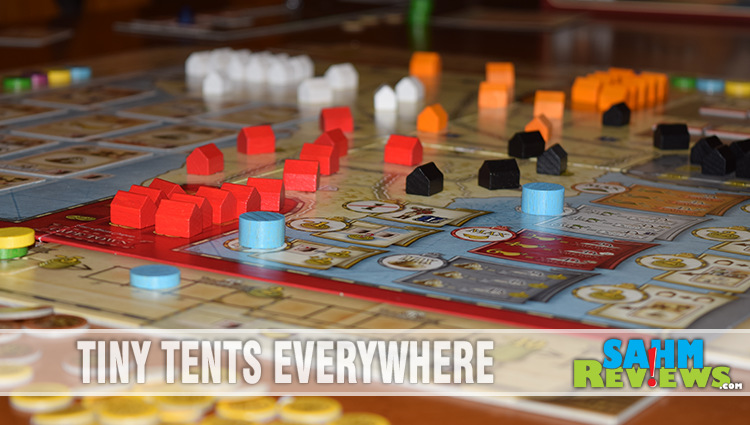 Growing up in Iowa in the 70’s and 80’s, I had limited interaction with people from foreign countries. The few exchange students who happened upon our small Catholic high school were an absolute novelty and I enjoyed hearing about how things were different where they lived.

College offered more opportunities to meet individuals from other places – both within the United States as well as other countries. As a member of the student government, I worked with a student who came from Kenya. As one of the responsibilities, we represented our school at a leadership conference in Minnesota which presented us with several travel hours of time to kill. I heard all about his home, their traditions and his family, including a sister who happened to be attending another small Iowa college. On our return trip from the conference, we stopped to say hello to her. Despite having just met me, she gifted me a packaged of tea from her home country. That was what seems like a lifetime ago. I remember very little about either of them, but I always think about them (and the tea) whenever I hear about Kenya.

So when we started playing Mombasa from R&R Games, part of me hoped it would include some reference to tea. Unfortunately, it doesn’t but the inclusion of coffee as a game commodity is a welcome substitute. Cotton and bananas are other goods available that set the stage for the chartered companies setting up trade across the region. As a good business person, your goal is to invest in the goods and the companies as you assist in setting up their trading posts. 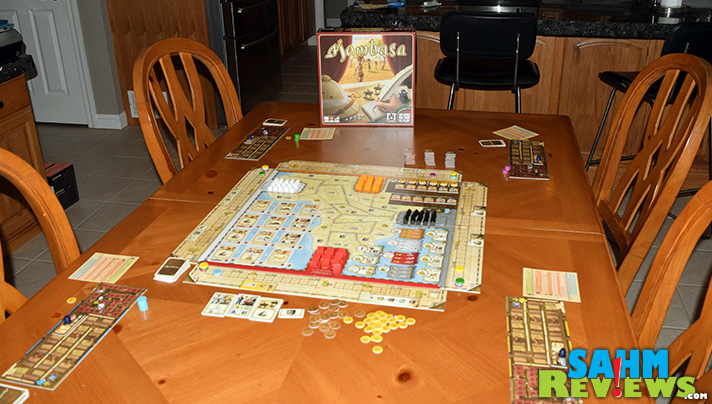 How do you do that? As in real life, there are many paths to earn money and I think that’s what I like about Mombasa. Different people have different play styles and some games benefit players who play certain ways. There are so many paths to victory in this game that it allowed me to focus on my own game and not worry (too much) about what other people were doing. The game consists of multiple play areas and action types including trading goods for additional actions and bonuses, working on bookkeeping or expanding into new territories. 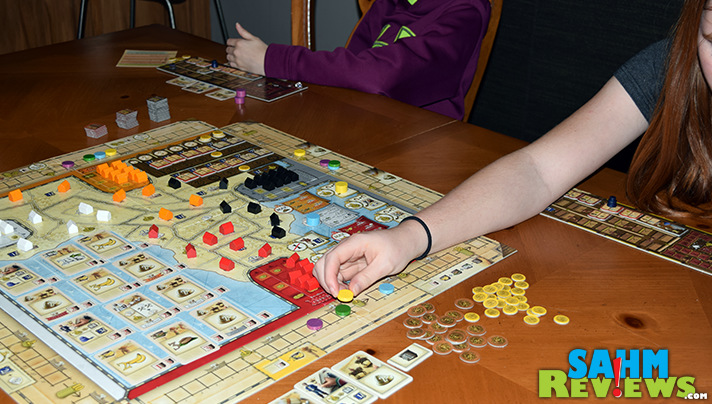 The primary focus of Mombasa is to maximize your investments. The person with the best portfolio at the end of the game wins. Players can invest all their money in one company and hope those stocks take off or they can invest a little in multiple companies. The value of each company fluctuates depending on what goods are traded, how many trading posts they have and more. As each player takes a turn, their actions directly impact the various companies.

The game takes place over seven rounds of three phases each. The first phase of each round involves planning. Much like the planning phase in La Isla, players work simultaneously to decide what actions they want to take that round from their handful of available cards. Those cards will be locked to a resting place and unavailable to use again until they are recovered. Only one stack is recovered each round though. For this reason, it’s important to plan each stack for future use. 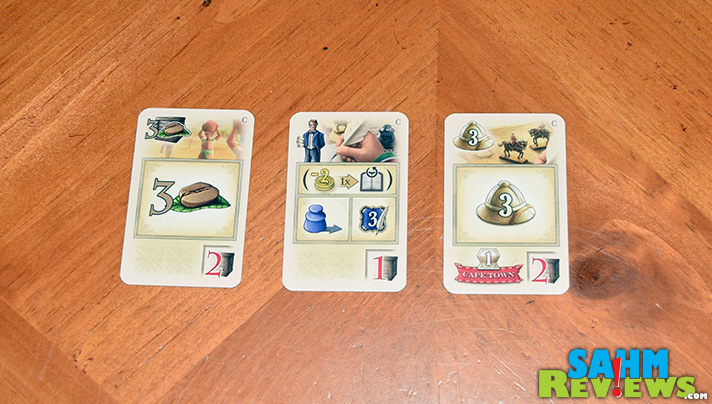 The next phase involves the cards each player selected during the planning phase. Starting with the first player, one action is taken then play continues clockwise until all actions have been made. Players can opt to spend goods to purchase additional cards that are added to their hand. This is achieved by utilizing matching goods cards with an equivalent value to the price of the cards for sale. 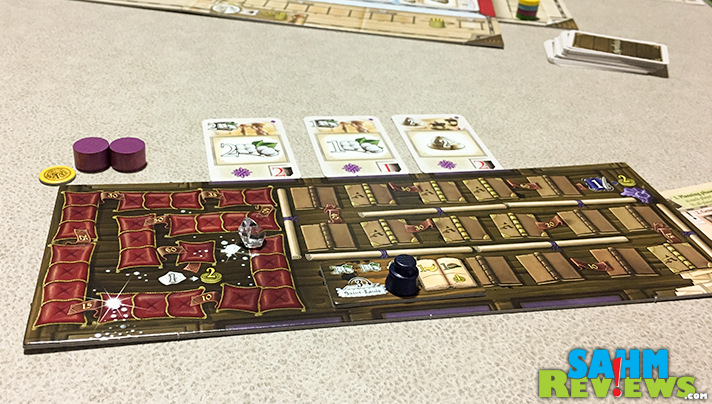 As an alternative, they can focus on diamond merchants or bookkeeping to earn bonuses on their individual bookkeeping and diamond boards. The bookkeeping track is a tricky action because it requires that a specific bookkeeper card be used in conjunction with whatever random requirements are shown on the player’s individual track. A player can move one space per turn and take advantage of all the bonuses or may choose to jump multiple spaces to land on a specific reward. Reaching certain levels also allows a player to increase the number of cards they can play in the planning phase. 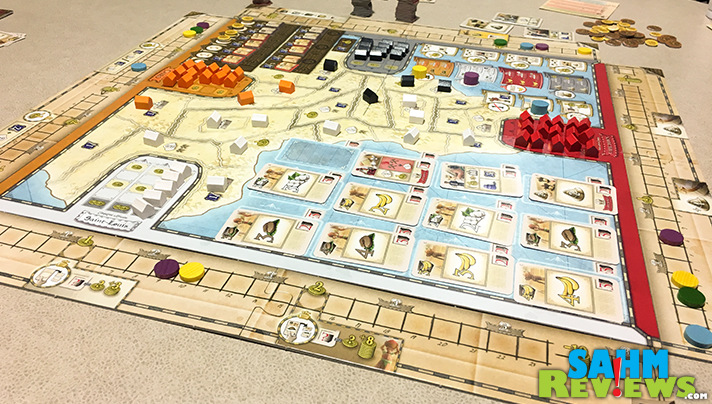 Another option is to explore the countryside and set up trading posts, spending exploration cards that allow the player to move up to the number of spaces displayed on the explorer hats. Exploring the lands rewards the player with various bonuses. In lieu of the previously mentioned actions, a player may opt to use their bonus marker to earn special rewards, bonuses or claim first player. 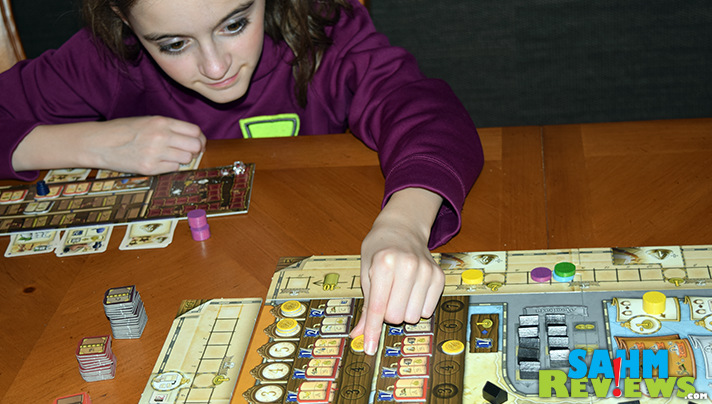 The final phase of each round involves preparing for the next round including refilling the cards for sale, returning bonus markers to players and adjusting the round markers.

Mombasa has a lot going on, but can still be won by a player new to the game. It takes some strategy, a bit of luck and the opportunity to work together with opponents to boost company values. If you’re ready to invest your time, copies of Mombasa are available on Amazon for under $38 or direct from R&R Games. Learn what other game investments R&R has in the works by checking out their Twitter and Facebook feeds.

Have you ever visited Africa?

12 comments on «Mombasa Board Game Overview»