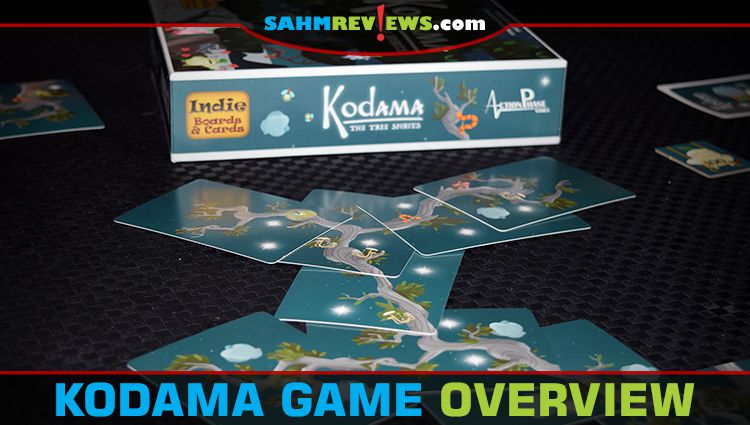 A couple years ago I took a trip back to the town I consider my hometown. My parents worked for the government and were required to transfer to new locations every couple of years. By the time I entered middle school I had already attended five different schools in four locations. I consider Savanna, Illinois as home because I was born there, attended 2nd, 3rd and part of fourth grade in the 70’s and then returned in 8th grade, where I eventually finished out high school.

While in elementary school in Savanna, my parents purchased a pre-fab home on the outskirts of this small town. When they were transferred to West Germany in the mid 70’s, they rented it out to other families stationed at the Savanna Army Depot. We would be living in government-supplied housing during our stay in West Germany, so the house in Savanna became an investment property since my parents didn’t need to sell it to pay for a down payment on a house overseas.

Before we left for Europe, I remember saying “Goodbye” to the young tree we had planted in the front yard of our house. It probably seems silly now, but to a 9 year old, I was leaving behind a living, breathing thing that I had known for nearly three years. I had always wondered how that tree fared and made a point of driving by our old house to check on its condition. It was still there, 40 years later. Bigger. A LOT bigger. I didn’t go over and talk to it, choosing instead to sit in the car, admire its size and relive the memories.

Whenever I come across a game that involves trees, I am reminded of this story. There have been a few over the past few years – Legend of the Cherry Tree, Enchanted Forest and Arboretum come to mind. Lately we’ve been playing Kodama: The Tree Spirits by Indie Boards and Cards and it too flooded me with these memories. But enough with the sappy story (pun intended), let’s talk about Kodama! 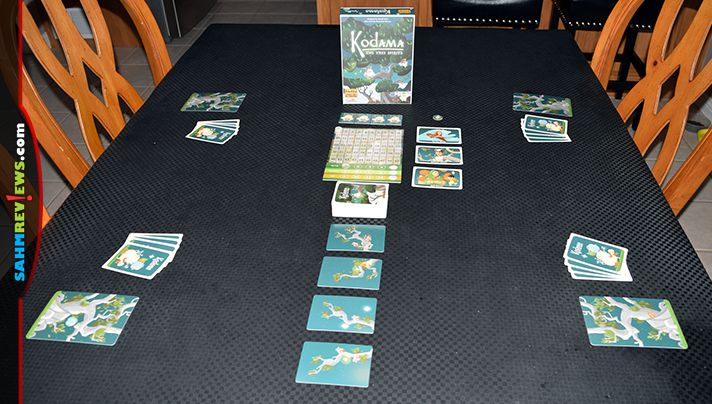 In Kodama, you and up to four other players are caretakers for Kodama, the tree spirits in a fast-growing forest. Your job is to keep the forest a healthy home for all of the inhabitants over three growing seasons. You must cultivate the right mix of flowers, insects and more to keep your Kodama as happy as possible, and the person who does so most efficiently will be remembered forever!

To set up the game, place the scoring track in the center of the play area with the included Season Token next to the word “Spring”. Everyone receives a randomly-dealt Trunk Card which is placed so that the bottom of the card is aligned with the edge of the table. The deck of Kodama cards are shuffled and four are dealt to each player. Each season of Decree cards are also shuffled and one is drawn and laid face-down to the side of the play area. All unused cards (Trunk, Kodama, Decree) are returned to the box and will not be used. A deck of Branch Cards is shuffled with four dealt out in a line in the center of the play area. The rest remain in a face-down draw deck next to the display. A game of Kodama is ready to begin! 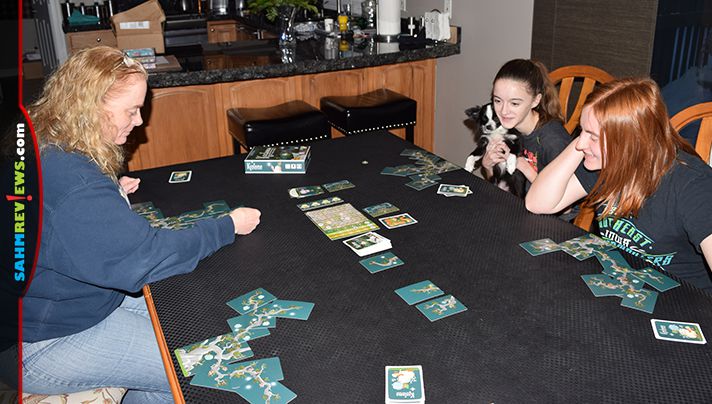 Each of the three seasons in a game of Kodama is divided into three phases. During the first phase, the Decree Phase, unique conditions are set for the season by turning over the associated Decree Card. This card will introduce special rules or scoring for that round only and will be discarded at the end of the season. 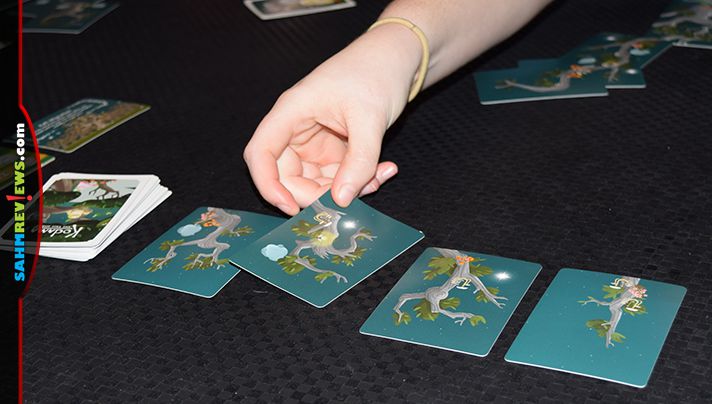 The next phase is the longest of the three and is called the Growing Phase. Starting with the first player, each person chooses one of the four Branch Cards in the center of the play area and plays it on their growing tree in front of them. Certain placement rules must be followed – the card can only touch one other card, may not cover the features of any other branch card, must not hang over the edge of the table (it would be underground) and you cannot place a card that would award you more than 10 points this turn. 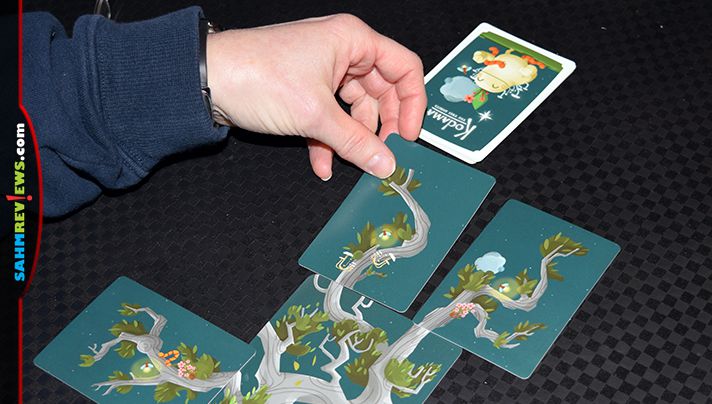 Players will each select a card from the play area four times with a new card being drawn as a replacement after every choice. After every card placement, players will score points based on the branch card they just played. You are trying to match up the various features on the cards (flowers, fireflies, caterpillars, etc.) to others on the same branch line back to the trunk. You’ll score one point for each matching feature in an uninterrupted line, keeping in mind the maximum score of 10 points you are limited to during card placement. 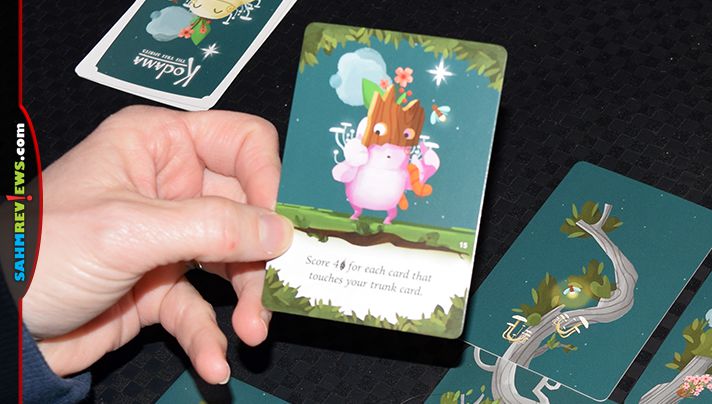 After all players have chosen, placed and scored four cards each, the final Kodama Phase begins. At the beginning of the game players were given four Kodama Cards, and at this time they choose one from their hand to score. These cards award bonus points for achieving goals and are kept secret from other players until they are scored. Selecting when to play which card is an important skill as you will not receive any other of these cards during the game and will play three of the four you begin with! 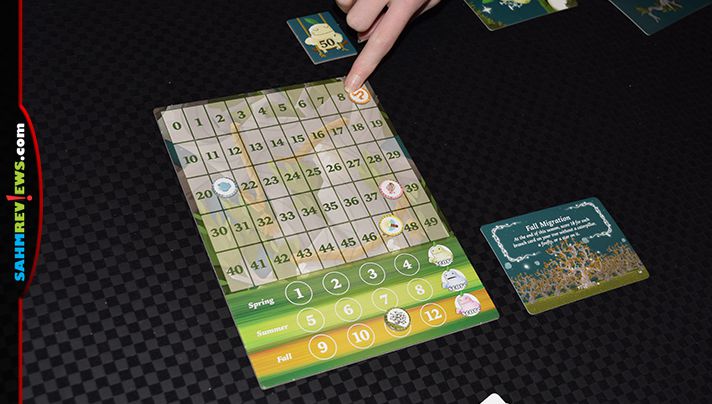 A new season is begun, the first player marker is passed to the player with the lowest current score. After three seasons played in the same manner are complete, the game is over. Take some time to admire each other’s large trees! The person with the highest overall score wins Kodama!

Extremely affordable at under $20 on Amazon or at your favorite local game store, Kodama is also a great gift idea for nearly any holiday or occasion! Indie Boards and Cards recently merged with another of our favorite game publishers, Stronghold Games. Be sure to stalk their website along with their Twitter and Facebook timelines to find out how this new partnership will flourish!

Have you ever planted your own tree?