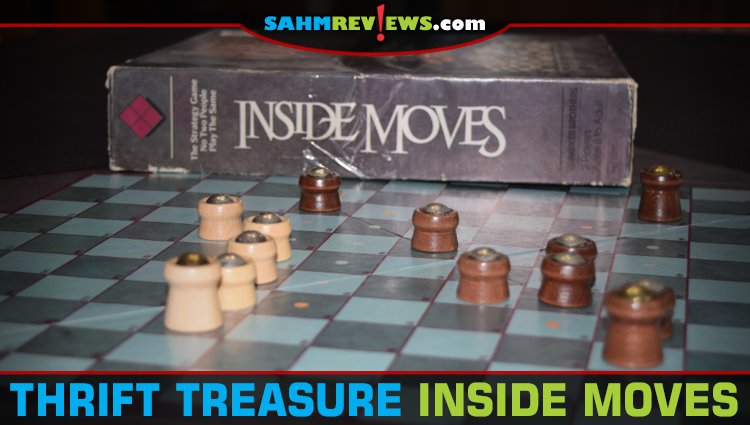 This week’s Thrift Treasure feature comes with a bit of a story. We found this copy of Inside Moves by Parker Brothers sometime last fall. It was only a couple bucks and I could have sworn I checked for all of the pieces to be included. When I got it home and began reading the instructions, I realized there was one missing.

As you’ll see, the game could have been played with any old replacement part. That wasn’t good enough for me since I was quite fond of the custom wood and metal pieces that came standard. I was afraid that I would never be able to find an exact replacement. I decided to post my request on a Facebook group for board game replacement parts and in no time at all a member came forward with the one I needed. He mentioned he had bought out a game store years ago when it went out of business and they had been saving extra parts for years. Inside Moves just happened to be one he had spares of!

We had intended to meet up at this year’s Geekway to the West convention. I don’t think I need to explain why that didn’t happen. Instead, he graciously mailed me the part along with a couple extra in case I lose some! Months later I can finally play the game as it was intended! 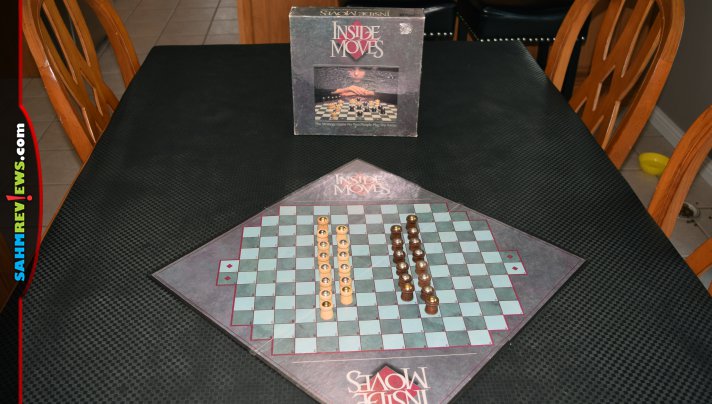 Inside Moves is an abstract game for two players that has many similarities to other classic titles. Each player begins the game with ten pawns (shorter pieces with a steel ball) and four power pieces (taller pieces with a brass ball) set up according to the instructions. The object is to eliminate all or all but one of your opponent’s pieces or to get two of yours into their goal area. 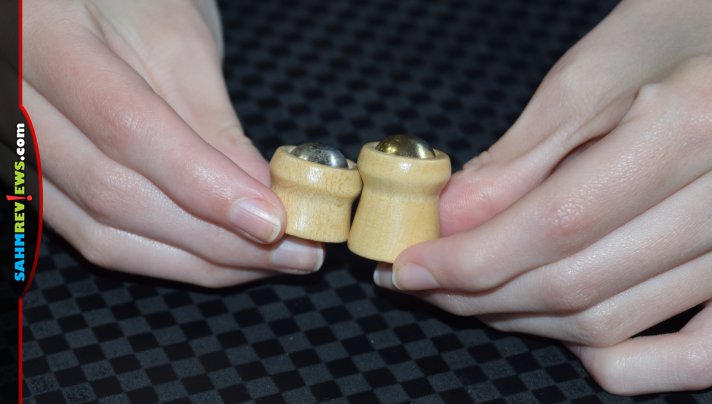 On your turn you can move any of your pieces in any direction, as long as there is an open space adjacent where it can land. This applies to either the pawns or the power pieces. The only exception is you cannot move your piece backwards in a way that it would enter your goal area. 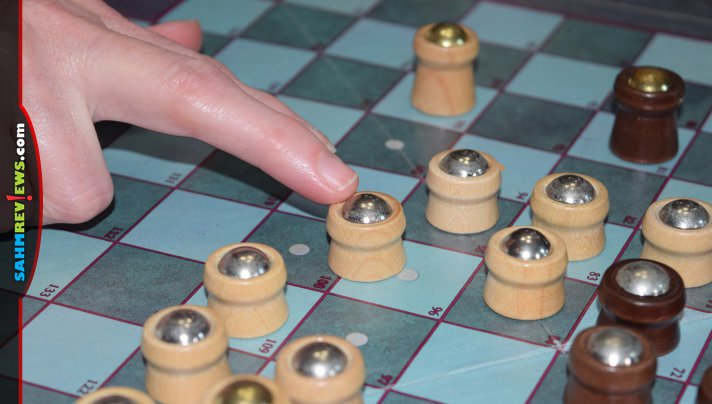 Instead of moving, you may elect to jump. This method is very similar to Checkers in that you can jump back and forth over your own pieces as long as you don’t end up on the same square in which you began. If you can jump multiple times, you do not have to continue (you can stop at any point). Jumps may be forwards, backwards or sideways as long as you are jumping over your own pieces and there is an empty space directly on the other side. 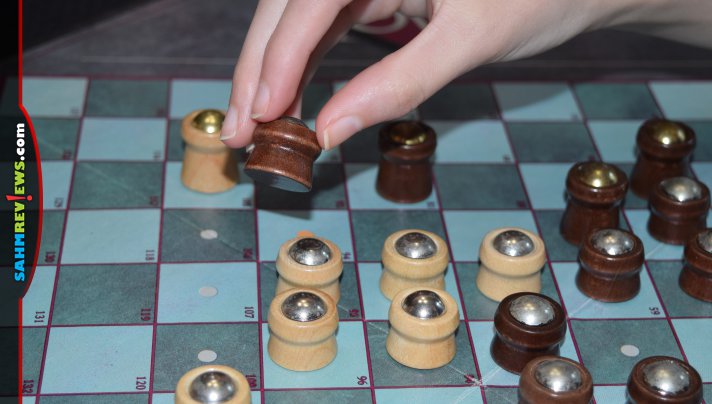 The last option is to capture. Again, like Checkers, you will capture an opponent’s piece when you jump over it successfully. You must also continue capturing if your positioning allows (no stopping, as in the jumping move). This also may be done in any direction. 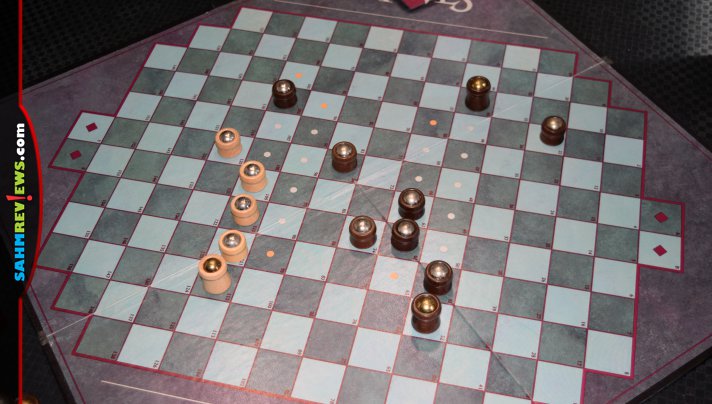 Power Pieces have a special ability in that they may make a Power Play, which is a Jump and a Capture combined. They cannot be intermixed, but you may jump as many times as needed and then begin a capture routine. This move may not be performed by the regular pawns, only the larger Power Pieces. 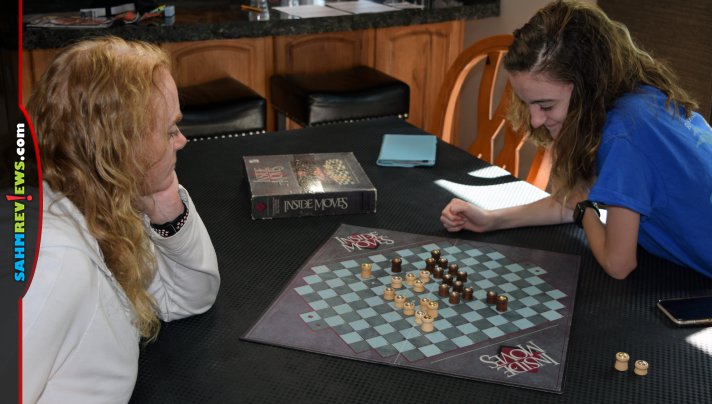 At either end of the board is a 2-space goal in which you are trying to get any two of your pieces. Once you enter the goal with a piece, it may not be moved out for any reason. It may be moved laterally to make room for another piece, but that’s it. The first player to fill both spots with their pieces wins Inside Moves! An alternate win condition is to capture all or all but one of your opponent’s pieces! 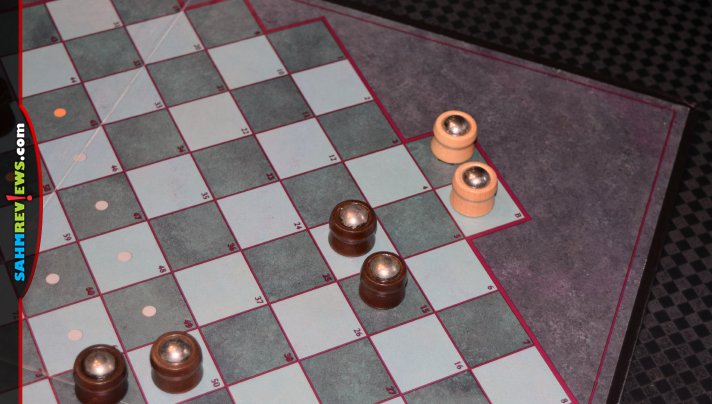 Originally known as Chivalry (1888) and Camelot (1930), there is still a formal organization “dedicated to the preservation, popularization, and play of Camelot, one of the finest abstract strategy board games ever invented”. Inside Moves doesn’t appear to be currently in print, but you can still find new and used copies available on eBay for a very fair price.

Were you familiar with Inside Moves? Camelot?