We’ve played plenty of battle games over the years. While the mechanisms change from game to game, thematically they are all pretty similar. You’re battling for power, land or prestige. I think I’m safe in saying that most embrace the conflict narrative either through a game recreating a historical battle, a clash of superhero powers or even a space war game. Since they’re “battle” games, all those things totally make sense, but they can be a bit intimidating for people who get overwhelmed by the idea of fighting to the death. Thankfully there are bear-y peaceful(ish) battle alternatives including BarBEARian Battlegrounds from GreenBrier Games. 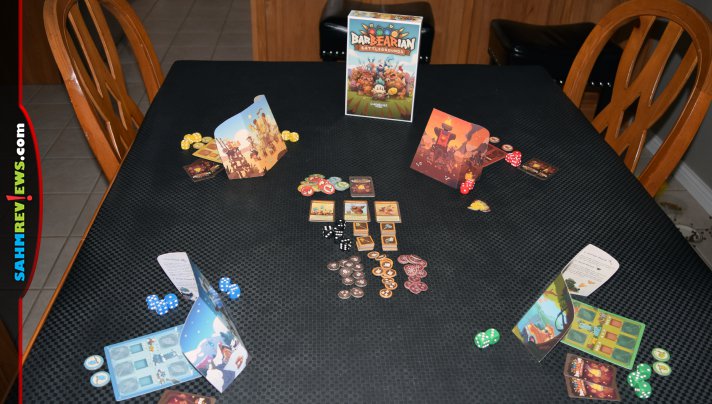 BarBEARian Battlegrounds plays between two and four players. Aside from setup differences, the objective and play are consistent regardless of player count. Select a color and take the mat, screen, dice and glory tokens of that color. You’ll have access to three dice immediately, but the remainder need to be purchased so set them aside. Deal two random cards from the Trials deck. You’ll keep one and return the other to the deck. Place the extra glory tokens, resources and remaining shuffled Trials cards in the center of the table to form a general pool. 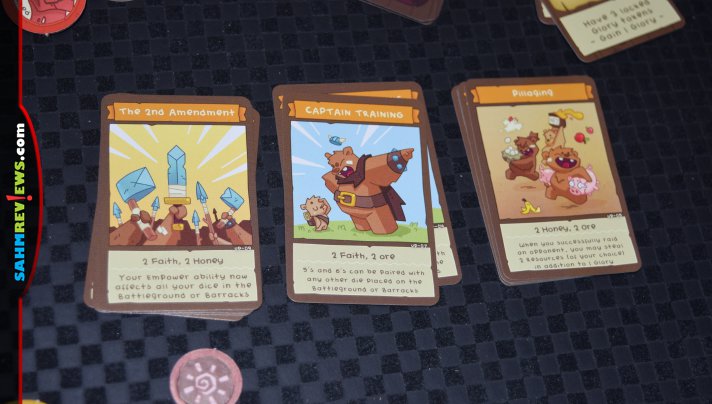 There are three different types of upgrade cards with one for each player. Sort them into stacks and put them face-up for everyone to see. Alternatively, you can give one set of to each player to hold off to the side by their extra dice until they are purchased. 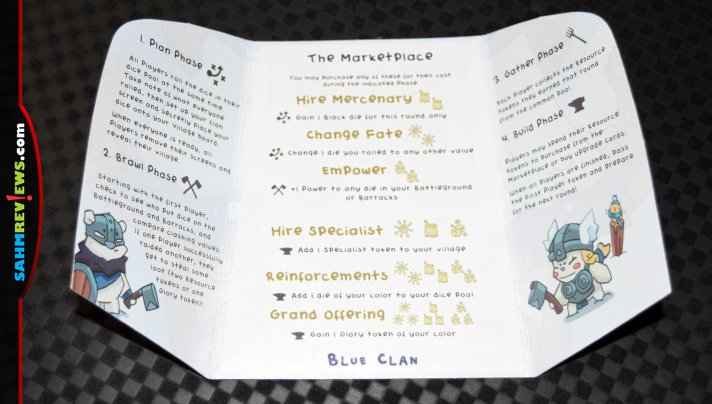 The object of BarBEARian Battlegrounds is to be the first player to earn seven glory tokens. You’ll do this by completing Trials, redeeming resources and raiding neighBEARing villages. There will be multiple rounds with each consisting of four phases: Plan, Brawl, Gather and Build. The details of these, along with the available marketplace items are shown on your player screen. There are multiple items available for purchase in the marketplace including such examples as hiring mercenaries or reinforcements (extra dice), changing fate (flipping the dice results) and making a grand offering (gaining glory). 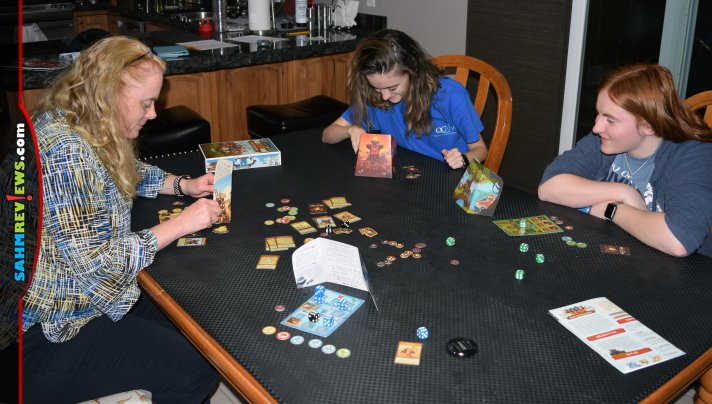 During the Plan phase, in turn order players decide if they would like to make upgrades. Then simultaneously everyone rolls their available dice. The results are public information and everyone makes note of what others roll. Once everyone is done examining the dice, place your player screen in front of your village to provide privacy. Use the available dice to earn resources, raid other villages and defend your own. 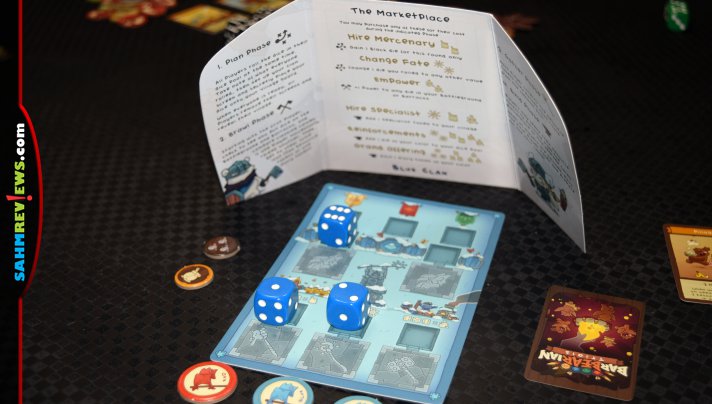 Placing dice is pretty self explanatory. Some fields allow you to collect specific resources by dice of the noted values. Only one die per space is allowed unless you’ve rolled duplicates. In that case, all dice of that value may be placed in the same field. Attacking, defending and gathering resources are a few options on how to spend dice. You may also place a die with a pip value of six into the temple to lock (flip) one of your glory tokens to prevent it from being stolen! 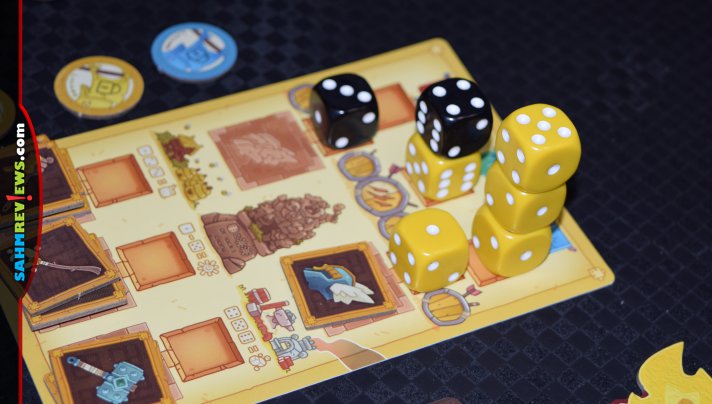 Players now remove their screens and resolve all the battles. Beginning with the first player and moving clockwise, you resolve any battles. Compare the value of the die (or dice) you’ve placed in a particular opponent’s village space on your board to the combination of the two dice they’ve added to their barracks (or should I say, BEARacks?). The dice in the barracks aren’t weakened from one village to the next and will defend against all attacks for the round. If your attack was stronger than their defense then you’ve been successful and may choose to loot either a resource or glory token from the defending village. If you select resources then the defending village gives you two resources of their choice) other wise, you may take one glory token. In the event they don’t have the items (or quantity) you are seeking then you may only collect as much as they have. In some cases, that may be none! In the event that same village is attacking you, you’ll make adjustments to the battle dice before proceeding to the defense step. 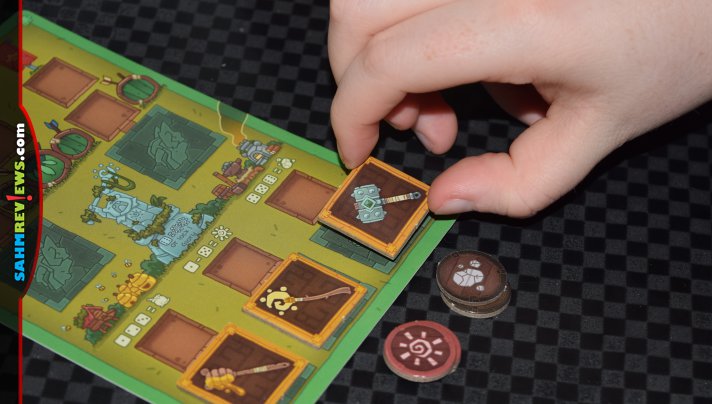 Once all brawls are resolved, players gather the resources they’ve set bears to collect. You’ll earn one resource for each die in that field, not the value of the pips on the dice. These resources can be saved up to make marketplace purchase. Upgrades and specialists may offer a consistent resource (without placing a die) or allow you to loot more when you are successful on a raid. These options are purchased during the Build phase so save your resources and plan accordingly. While there’s a limit of one upgrade per village, you may purchase multiple of each specialist! 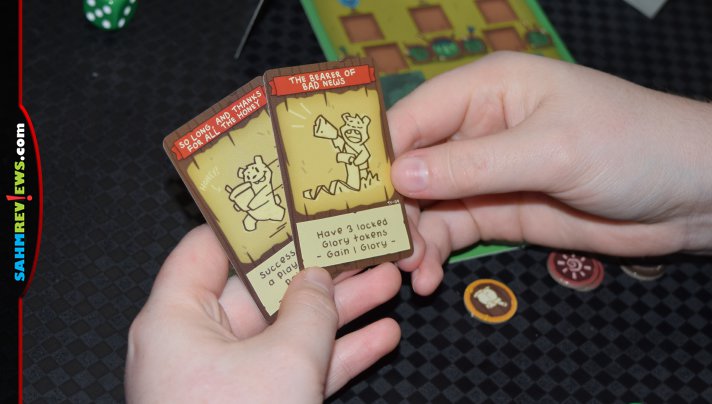 At any point during the game, if you meet the requirements of your Trials card, you may cash it in and immediately earn the noted glory. The game ends when someone achieves a seventh glory token. I said it is a peaceful(ish) game because there isn’t a fight to the death. The battling between villages is a form of conflict, but it doesn’t feel harsh which makes BarBEARian Battlegrounds a family-friendly version of a battle game. If you are ready to charge in to your next game night with a copy of BarBEARian Battlegrounds, you can order direct from GreenBrier Games, purchase on Amazon or pick it up at your local game store. Raid GreenBrier Games’ social channels (Twitter, Facebook) to find out about upcoming games and promotions. You may even loot some details about current Kickstarters like the latest in the BarBEARian Battlegrounds universe: Tales of BarBEARia.

Do you think the use of bears makes this battle game more approachable for families?