As I began to type this, I was going to say that we’re a bit obsessed with Marvel. (Duh). And that we’re a bit obsessed with board games. (Again, duh.) But we’ve said it like a million times here and considering we talk about both pretty frequently, it sure seems pretty obvious. Occasionally, we even talk about both in the same article! That was the case with Thanos Rising – Avengers: Infinity War board game that released to coincide with the blockbuster, Avengers: Infinity War movie and Pictopia Marvel Cinematic Universe edition that we featured before Thor: Ragnarok. Another example of a game that blends these two passions is Legendary: A Marvel Deck Building Game from Upper Deck. Each of these games offers a different style of game play with Thanos Rising and Legendary being cooperative games where all players work together as a team to defeat the villains. Pictopia involves individual play with everyone on their own to figure out the answers. None of these pitted superheroes against each other like we saw in Captain America: Civil War. 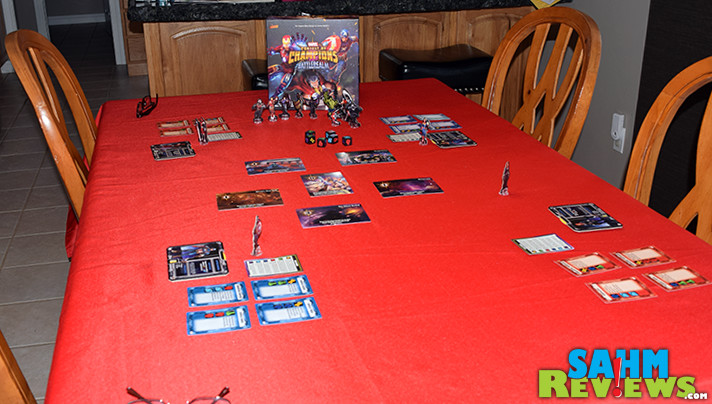 However, the newest Marvel board game from Upper Deck Entertainment does! In Marvel Contest of Champions: Battlerealm, you (and up to 5 friends) take on the role as one of your favorite Contest of Champions Heroes and will be attacking each other in a last-hero-standing battle to the death. That sounded a bit dramatic, but we’re talking about Marvel superheroes and, well, did you see Infinity War? I’ll just leave it at that. Setup is a snap. Everyone selects a hero including Ant-Man, Black Panther, Black Widow, Captain America, Captain Marvel, Civil Warrior, Falcon, Guillotine, Hawkeye, Hulk, Iron Man, Thor and Vision. Take that hero’s Character Card, standee and Power Cards. Next, randomly choose Location Cards equivalent to one per player plus one additional. Place them in a circle with the Crystal Prison inside the circle. Everyone selects a starting location (other than the Crystal Prison), dice are placed within reach and you’re ready to start! 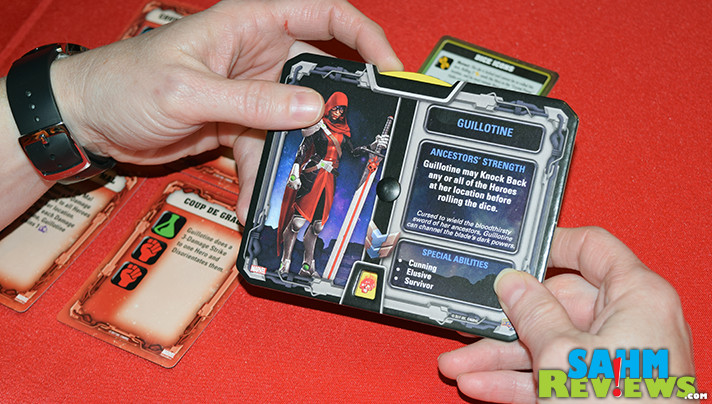 Your Character Card displays your name, Primary Power, Info and Special Abilities. In the bottom center is the PVP Point Counter. The red number is your starting PVP level. Each Hero has a unique profile that allows them to manipulate their battles in ways others cannot. In addition to the primary power shown on the Character Card, you’ll have some kind of secondary power that can be utilized once per turn. 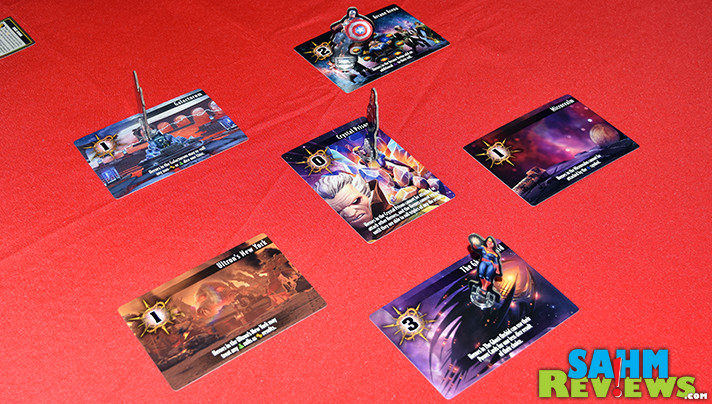 One of the nice things about games such as this is there are more Character and Location options than are used in a single game so each setup will be different. There are 40 key Battlerealm locations such as Thanos’ Throne, S.H.I.E.L.D. Hanger, The Kyln, Asgard Vault, Ultron’s New York, Labyrinth and Avengers Tower. Each has a different ability to be used by heroes in that location. On the top right of each Location Card is the name and the bottom displays that location’s ability. The number at the top left represents the number of PVP Points you’ll earn when you land on that location. 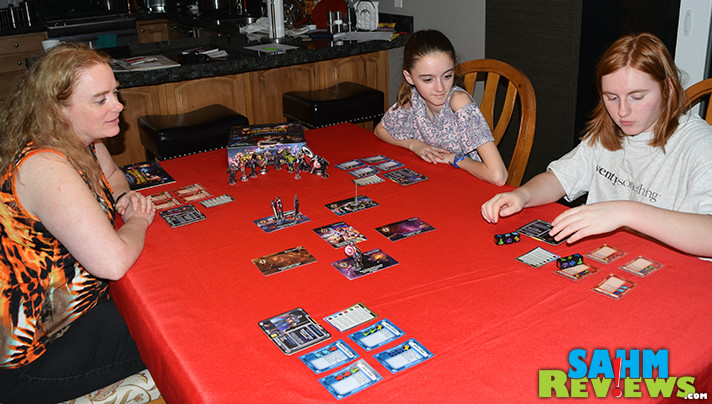 Your turn will include four steps: 1) Roll and Re-Roll Dice, 2) Finalize Dice Results, 3) Resolve Dice and 4) End Your Turn. You’ll roll dice, use your powers, attack other players, move to different locations all in a quest to earn the title of champion. The game ends when only one Hero remains standing (and isn’t in Prison) or when a Hero reaches 21 PVP (Victory) Points. You’ll earn points by landing on different locations and can earn points for multiple locations in one turn. You can also earn 3 PVP points for landing the killing blow on another player, thus eliminating them from the game.

To begin, you’ll roll all the dice. There are six different possible outcomes on each die. When a Mutant is rolled, it’s locked and cannot be re-rolled. Rolling three Mutants on one turn sends you to the Crystal Prison where you can’t attack or be attacked. You’re stuck there until you roll three identical of any other result. When a Science result is rolled, it also is locked and cannot be re-rolled. Roll three Science on a turn and you’ll cause an Explosion, wielding one PVP Point of damage to every Hero at your location. You’ll cause one additional point of damage for each Science rolled above those three. When a Skill result displays, you can do one PVP Point of damage to another hero in your location whereas a Tech result allows you to do one PVP Point of damage to a Hero in another location. You can “heal” yourself by rolling Mystic. You’ll earn one PVP Point for each of those. Finally, there are the Cosmic results. Those let you move from one location to another. The number required depends on how many other Heroes are on your location. You can choose to re-roll any or all up to two times as long as they aren’t locked. 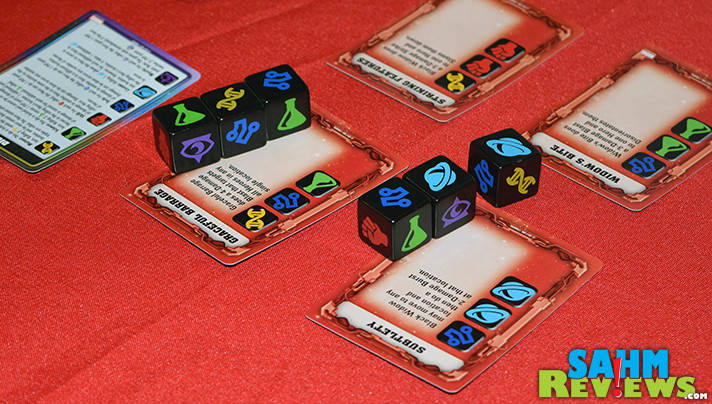 Next, you’ll finalize your dice results by checking your primary powers and location abilities. Once you’ve done this, you’ll Resolve the dice. You can use your dice to activate your Secondary Powers, move locations, inflict damage or increase your PVP Points. Finally, you’ll end your turn. 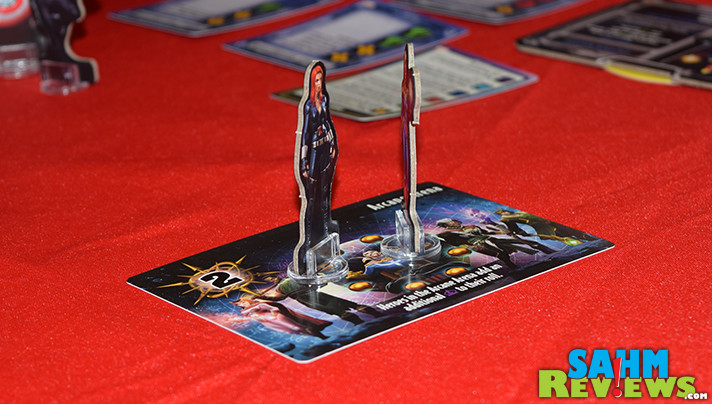 Each game lasts only about 30 minutes and you may find yourself knocked out after the first round if your opponents are teaming up on you. Because of the quick gameplay, it’s easy to change out the characters and locations and put together back to back games. Marvel Contest of Champions: Battlerealm is recommended for ages 12 and up, but as with most games we think this is easily playable by younger kids who have a familiarity with strategy or combat games or an understanding of the characters and how their abilities work. As an example, using secondary powers is similar to earning combos in video games so a child who understands that concept will do fine with this one. Since it’s based on the Contest of Champions mobile game, anyone who has played that will have a better grasp of not only the game play but also some of the unique characters!

And if you’re a fan of Marvel, it’s definitely one you’ll want for game night! It’s set to release on May 23rd for $39.99 and will be available on Amazon as well as from your local game retailer. Be sure to keep watch of Upper Deck Entertainment on Facebook, Twitter and Instagram to see what else they’re working on with Marvel as well as other licenses!

Which Champion will you want to portray?