Mother Nature has been anything but friendly recently. Over the past couple of years, the school district has added a mid-spring “snow day makeup” so we’re not constantly adjusting the last day of school. Somehow (knock on wood), we haven’t needed to tap into that coveted spot on the calendar and what could have been a school day will actually end up being a day off. Care to take a guess what that date is? April 27th. If you’re a certified geek, you know how important that day is. It’s the start of a war. Not just any war… Marvel Infinity War!! We decided to take a gamble when tickets released and purchase them for opening day. Thank goodness we didn’t have a snow makeup day or we would have been tasked with deciding whether to call the kids in “sick”. Isn’t is wonderful when the planets align and what could have been lemons suddenly becomes lemonade?

If you’ve been following along the Marvel Cinematic Universe, you’re aware that Marvel Avengers Infinity War centers around Thanos and his quest to acquire the six Infinity Stones. With them, he’ll have massive control and can wipe out half the universe with the swoop of his mighty Infinity Gauntlet. We still have until the end of the week until we get to watch Chris Evans as Captain America (for the last time perhaps?), Vision played by Paul Bettany, Scarlet Witch and the myriad of other Marvel heroes take on a massive titan on the big screen. Until then, we’ll do our best to curtail the bad guy on our own while simultaneously refreshing our Marvel knowledge about the cast of characters. We’ll team up to save the universe in Thanos Rising from USAopoly. 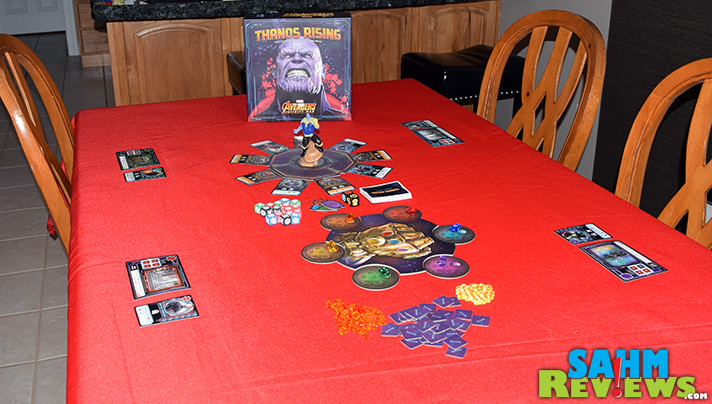 To begin the game, each player selects a Team Base card and the associated hero. Each is part of a different affiliation as designated by the icon on the upper left of the base and hero card. Thanos’ gauntlet is placed near the center of the table with the six Infinity Stone cards placed in the related slots around it. The corresponding stone is set on top of each disk and Infinity Stone counters placed nearby. Alongside the gauntlet, place the Deployment ring with the Thanos figure in the middle. Randomly place 9 Asset cards (3 per sector) around the outside of the ring. The remainder of the deck of Asset cards is placed nearby and will be used to fill spots as Hero cards are recruited or as Villain or Heroes are defeated. Bonus tokens are placed in a pile within reach of all players, as are the dice. You and your team are now ready to take on Thanos and his team of Villains. 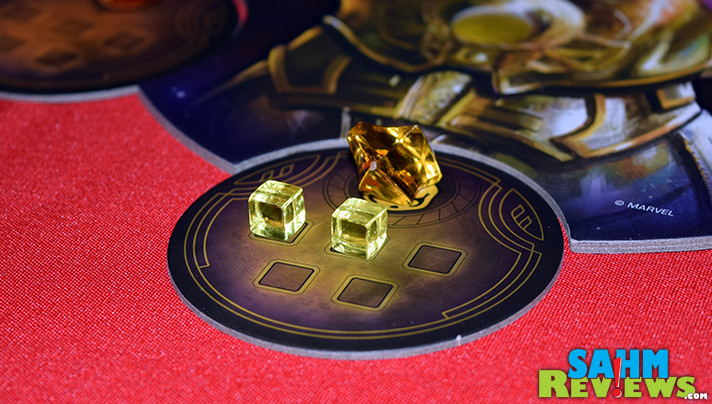 On your turn, you’ll follow five steps. First, decide what sector you want to deploy your team and place your deployment token there to indicate your decision. Next, roll the Infinity Stone and Thanos Dice and resolve them in that order. Place an Infinity Stone counter on the marked spot of the stone that was rolled. 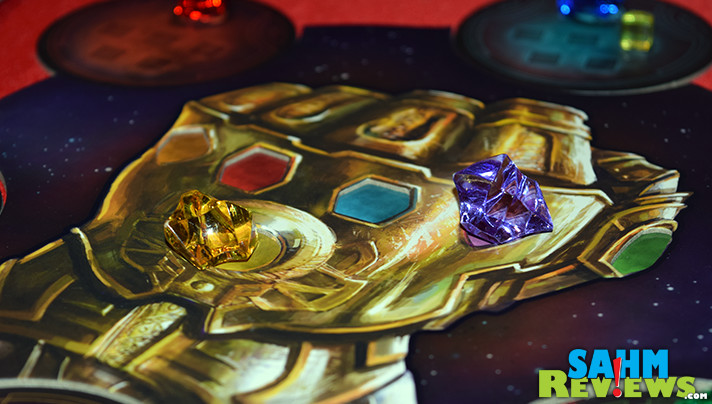 If all the spots for a particular Infinity Stone are filled up, that stone is placed in Thanos’ gauntlet, the card is flipped to reveal the stone’s power and Thanos now has access to that ability! There are ways to mitigate the number of counters before it fills up, but once a stone is in his gauntlet, your heroes will need to up their game to keep him from getting more. 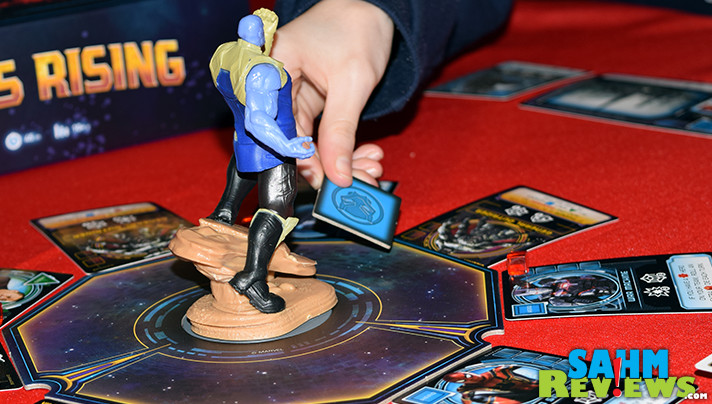 The Thanos die indicates whether he will move sectors (he’s “in” the one he’s facing), call on the assistance of villains in other sectors or adding another roll for control of the Infinity Stones. Then, Thanos attacks every Hero in the sector he’s facing, including every member of the Deployment team if Thanos is facing the Deployment marker! Powers are then activated for any Villains in the current zone. 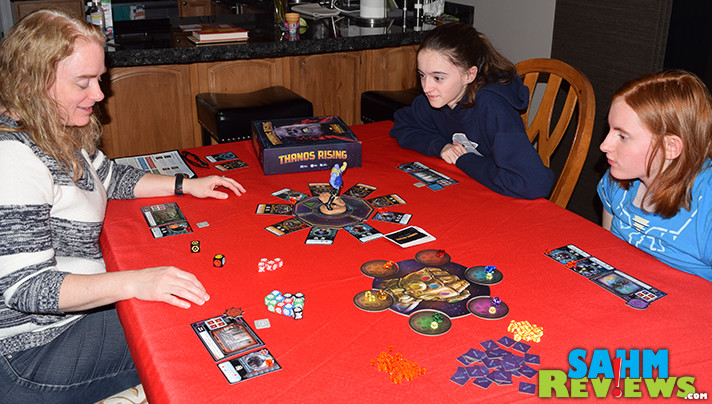 Now that Thanos has taken his turn, now you get to take YOUR turn. As your third step in your turn, roll the Power Dice. Your Base card indicates which ones you’ll roll then you can add others based on the abilities of the various Heroes on your team. The different colors of dice have different Hero powers including Battle, Technology, Mystic and Cosmic. You’ll need to assign at least one die to a Hero in your Deployment Zone then continue to re-roll the remaining dice until all have either been placed or forfeited. If you cannot place a die on a roll, you’ll have to forfeit one. You may opt to place more than one die at a time, but all dice placed at the same time need to go on the same Hero or Villain. 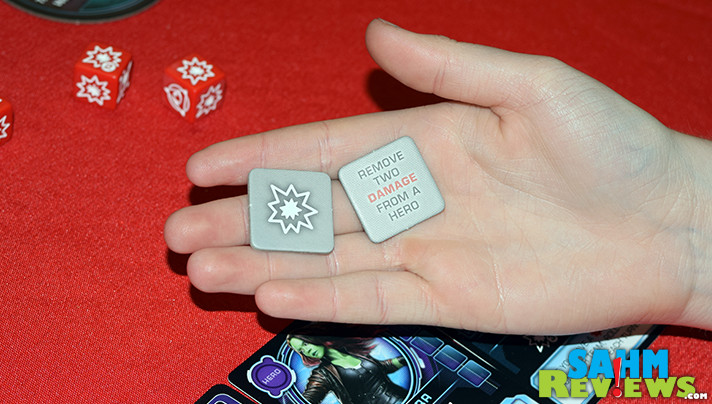 For the final step of your turn, you’ll finalize the dice you’ve placed. When you complete all the requirements for a Hero, you recruit that person onto your team. If you meet all the requirements on a Villain card, you add one damage to their card and earn a Bonus Token to be used in a future turn or to assist another player on their turn. Any Heroes or Villains that have all the slots filled on their Damage Counter are removed from the game and a new Asset is placed into that sector to begin the next player’s turn. 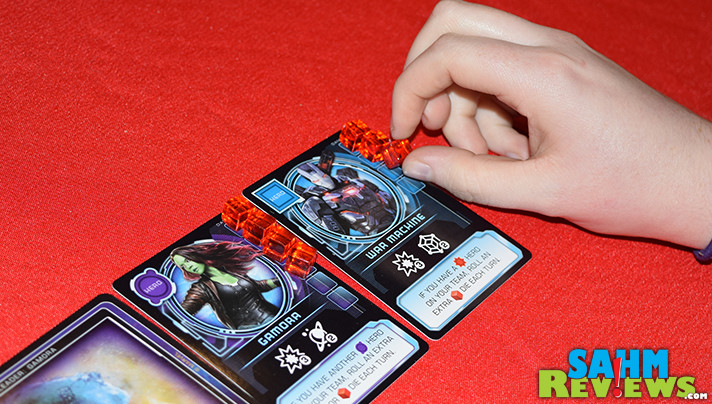 The game continues until one of three things happens. If Thanos collects all the Infinity Stones, he wins. If ten or more Heroes are defeated, Thanos wins. If any one player has all of their team defeated, Thanos wins. If players are able to defeat the designated amount of Villains (7 for a beginner game, 12 for a more difficult one) then the team wins. Good luck with trying to win this battle… any wonder it takes pretty much every Marvel Super Hero there is!

Thanos Rising – Avengers: Infinity War board game thematically is excellent – especially with the excitement surrounding the release of the movie! It’s a cooperative game that involves a mix of luck and strategy and will survive well after the buzz about the movie dies down. If you’re up for the challenge of defeating Thanos, pick up a copy on Amazon or direct from USAopoly.. Zone in to USAopoly’s Twitter and Facebook channels for updates on what’s next in their pipeline.

Do you enjoy playing games that tie to a movie?