There are scores of different classifications of board games. Cooperative, strategy, tile-laying, bluffing, economic – the list goes on. Some categories can be broken down much easier than others. Is a game cooperative or competitive? Short or long? Single-player or designed for an entire party? You can even judge whether the game has a theme or is abstract.

While most games issued today have some type of theme associated with them, even these can be broken down further. The theme might be one created solely for the game or maybe it is tied to a licensed intellectual property. It is the latter that I feel adds an additional amount of pressure to the game’s designers and publisher. Not only are they tasked with creating an engaging and challenging game, they must remain true to the license. There are good examples in the recent Thanos Rising and Marvel Contest of Champions: Battlerealm, both of which were released to coincide with Avengers: Infinity War. Of course it doesn’t always succeed (cough…Saved by the Bell…cough).

For as long as video games have been popular, designers have been trying to convert the experience into the analog world of board games. Pac-Man, Zaxxon and Super Mario have all received the board game treatment. But there’s one company that is slowly working on my favorites of all time, the Atari cartridge series. Last November we told you about IDW Games‘ brand new Centipede, the first in their line of classic video game board games. Here it is only six months later and their second title in the series has just hit the shelves. And it’s another winner – Missile Command! 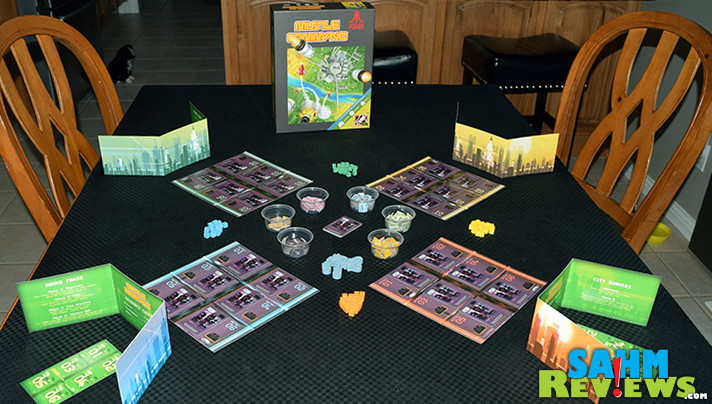 If you recall, the Centipede board game was designed for two players, one who played as the mushroom-hunting gnome and the other as the Centipede! This asymmetrical battle was true to its video game roots and regularly has a spot in our game night bag. But this new version may just supplant it. Missile Command is designed for three to six players and while recommended for ages 14+, it could easily be enjoyed by kids as young as eight if an adult were present to explain the rules.

I put a lot of quarters in the original Missile Command video game, but was never very good at it. If you’ve never played, you were in charge of a battery of missiles trying to protect your cities from an onslaught of ballistic missiles that split into multiple missiles as they entered the atmosphere. You controlled a crosshair on the screen via a trackball that aims counter missiles. But your supply of missiles is limited, so you must use them efficiently to protect your six cities. As rounds progress, the ballistic missiles fall faster, in greater quantities and get smarter to the point they can dodge ill-fired counter missiles. Like I said, I wasn’t very good… 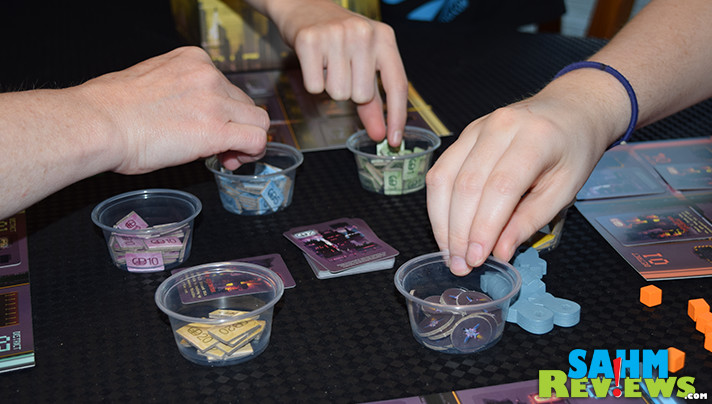 In this new Missile Command board game, not only must you defend your six cities, you are also in control of the aerial attack on the other players! In the box you’ll find six player boards, six radar screens, six player screens, 40 city tiles, 40 scoring tokens, 120 missiles (20 in each player color), nuke tokens, shield tokens, interceptor tokens and various currency tokens. 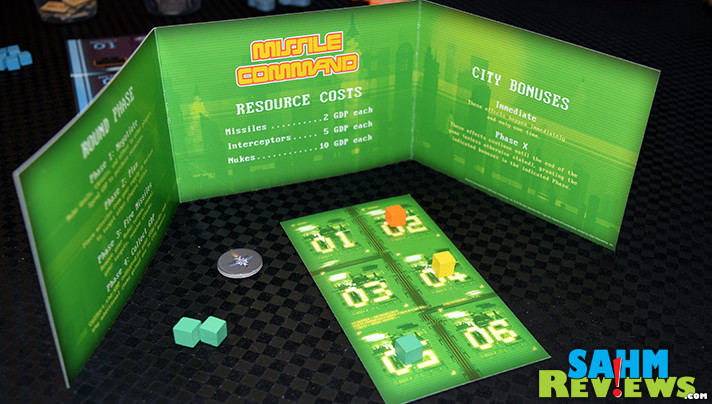 Each player receives a radar screen, player screen, city board and missiles of their color. All missiles are put in the center of the play area and face-down city tiles are randomly seeded on each player’s city board. Two Nukes per player are added to the supply along with all of the Interceptors, Scoring tokens and GDP currency tokens. Players start with 15 GDP in their personal supply.

Unlike many other games, there are no turns in Missile Command. All players play at the same time during each round. Rounds are divided into four unique phases, which are resolved in order. The first phase is the Negotiate phase. A 3-minute timer is set on a player’s phone and all players may make deals, threats and offers to other players. This is also the only time players may spend their GDP to purchase missiles and other resources from the general supply. All deals made that aren’t executed immediately are non-binding! So while a purchase offer will transact immediately, an agreement not to attack each other this round can be broken without penalty. Remember, the object of the game is to destroy the other players’ cities – and theirs is to destroy yours! 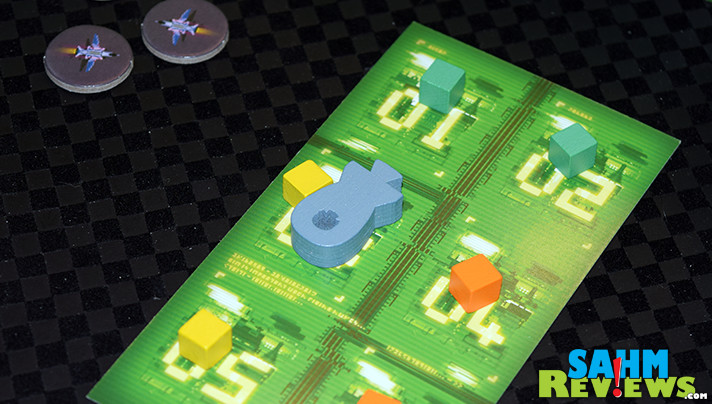 During the second phase (Plan phase), players move all their purchased resources behind their screen and begin to plan their attacks. Your planning board is made up of six Vectors, which correspond to the same six Vectors on other players’ City boards. You may place one missile on each Vector, the color of the missile denoting who you are attacking. Additionally, a nuke token may be added that will do additional damage if the strike is successful. 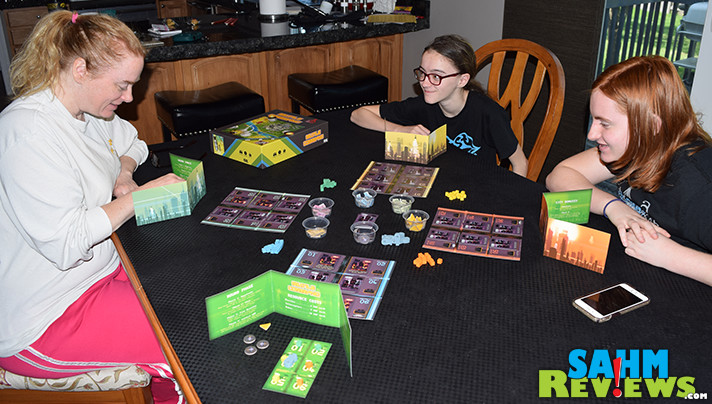 After all plans have been laid, phase three begins where everyone fires their missiles. All players will fire at the same time, but it is easier to resolve them in order. Any missiles fired onto a vector that has a returning missile from the defending player in the same vector and headed towards the attacker crash into each other and cancel out. If a player discovers they are being attacked and have Interceptors at their disposal, they may declare their launch and they will take down the incoming missile. If a missile is not stopped by another missile or an Interceptor, it destroys the city it was targeting.

If a missile with a Nuke attached hits a city, not only is that city destroyed, an adjacent city is also leveled. All missiles and Nukes are returned to the general supply once used and are available for purchase in subsequent rounds. When you destroy a city, you will receive one Scoring token from the supply. If you used a Nuke and destroyed two cities, then you receive two Scoring tokens. If more than only player attacked the same city, both will receive tokens as turns occur simultaneously. 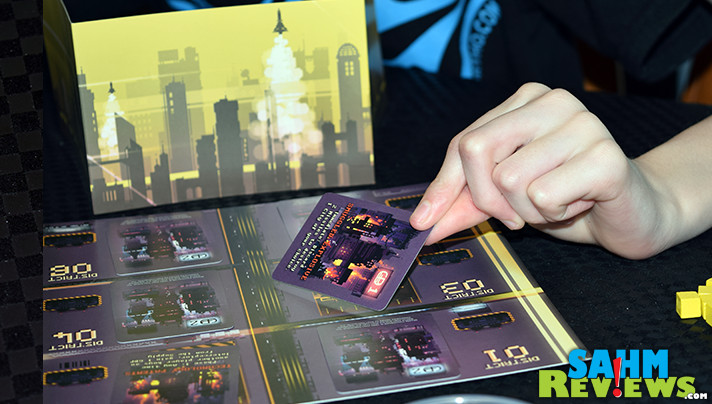 At this point it might seem easy to just pile onto one player and destroy all their cities. When a city is destroyed, that player turns over the City card and will receive a bonus. It might be immediate receipt of goods, lower the costs on items in future rounds or even award end-game points for achieving certain goals! And when one person is completely eliminated from the game by losing all of their cities, the game ends immediately! Players receive points for each of their Scoring tokens, undestroyed cities and leftover currency, missiles and Interceptors. It is entirely possible for the eliminated player to still win if they were successful in destroying enough of their opponents’ cities and combine it with some end-game bonuses!

Much like Centipede, Missile Command remains true to the license but provides a quite different game experience than the upright cabinet version. Copies just became available on Amazon for under $30 or at your favorite game store. Be sure to check out IDW’s website as well as their Twitter and Facebook feeds to find out what’s next in line in their series of classic Atari games! Rumor has it we’ll see a version of Asteroids!

What video game would you love to see in board game form?