We were early adopters of the iPad, purchasing the very first version the week it made its debut. We had long awaited a true tablet experience that wasn’t just a fold-able laptop. It was cutting edge technology of the time and continues to be the first device we grab when we want to tune into Netflix or watch a YouTube video. Of course we imagined all of the time we would save by using the slew of apps being made – from advance calculators and note-taking apps to Office and Photoshop replacements. In the end, our most-used apps were from the games section of the App Store.

Some of these first games were recreations of titles you could find elsewhere. Farmville was super popular, as was Hellkid, Cascade and Fairway Solitaire. And we’ve lost track of how many hours we’ve played Hearthstone! But one of the first apps to make great use of the swipe technology found on tablets was Fruit Ninja. An addicting game about using a katana to slice up your daily allowance of fruit. You wielded the sword and cut by swiping your finger across the screen, trying to halve the produce while avoiding the bombs. By some estimates over a billion people downloaded and played it!

It should come as no surprise to learn that Lucky Duck Games has smartly created an offline version in their new Fruit Ninja: Combo Party card game. In a similar vein to IDW’s line of classic Atari games (Centipede, Missile Command), Lucky Duck stays true to the original digital version while creating a card game that can stand on its own. 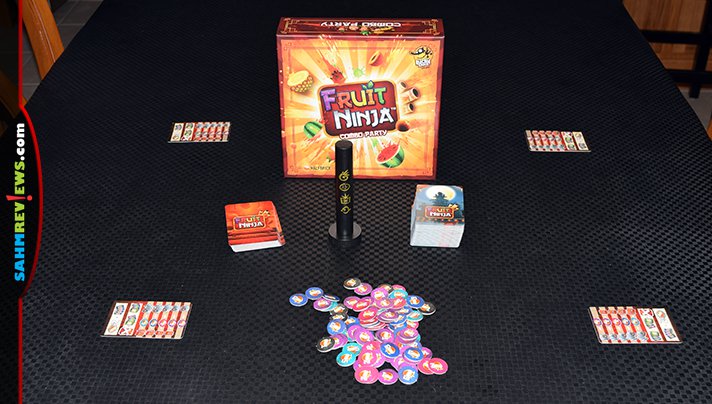 In Fruit Ninja: Combo Party you are trying to create combo runs of either matching or all-different cards. There are six different fruit types and twelve examples of each in the deck. This deck is shuffled and a hand of twelve cards are dealt to each player (Fruit Ninja: Combo Party supports up to six players). Each person also receives a helper card so they can remember how combos are scored and a separate deck of Bonus Cards are shuffled and set in the center of the play area along with a pile of scoring tokens (apples). 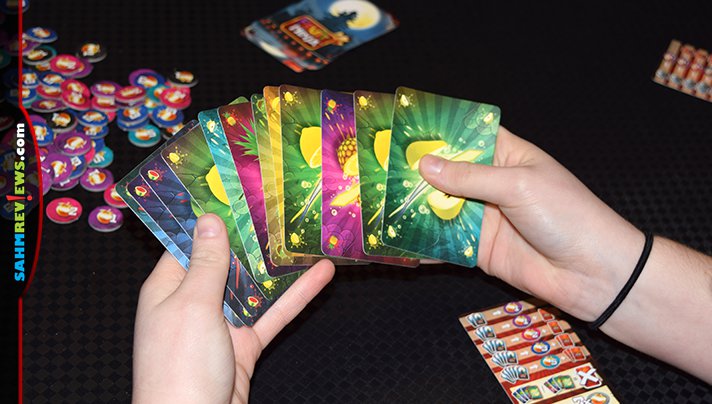 A game of Fruit Ninja: Combo Party is played over 2-4 rounds, with each round being broken up into eleven turns. Everyone plays at the same time by looking at their hand of cards, choosing one and placing it face-down in front of them. The remaining cards in their hand are passed to the player on their left for use during the next turn.

At the same time, everyone reveals their chosen card. If two or more people have chosen the same fruit, those players rush to grab the wooden katana handle. The first to do so draws the top Reward Card and keeps it face-down next to them. All players then take their revealed card and place it on their pile in front of them (or start a new pile if it is the first turn or there are no cards currently there). 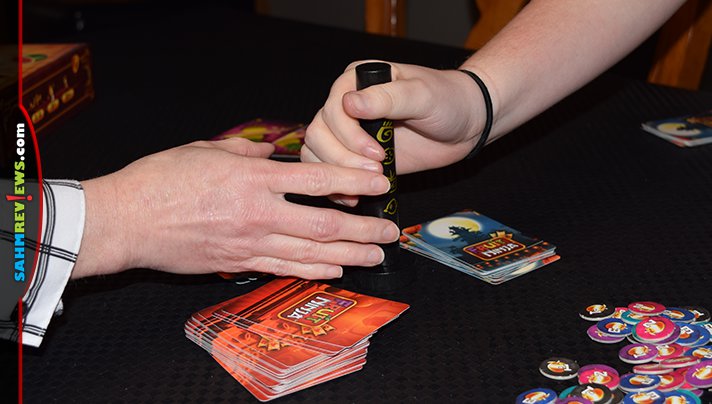 As mentioned previously, your goal is to create a combination of cards by pressing your luck each turn. You want to collect all of the same card or a variety of cards without repeats. The more you collect, the higher your reward when you decide to score your combo. Matching sets are worth twice what non-unique sets are, but are much more difficult to complete at the higher levels. 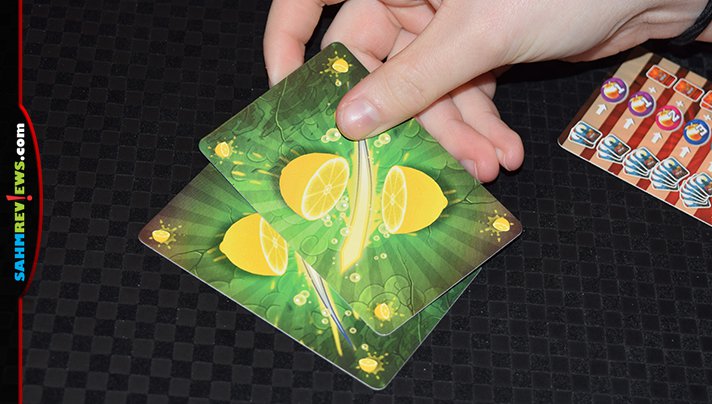 After you place your card, you must immediately decide whether or not to press your luck or score your combo. If scoring, you’ll receive points and Reward Cards equal to the table shown on your helper card (determined by the number of cards in your combo). Unique combos (all of the same card) score double the amount of point tokens! If you decide to push your luck, nothing happens and you continue to add cards in subsequent rounds.

However, if you cannot continue your combo because the passed hand doesn’t have the correct card, your combo ends and you must score it immediately. That last card is discarded and your previous combo is scored. You still receive any listed point tokens, but forego any Reward Cards you would have received if you had played it safe. 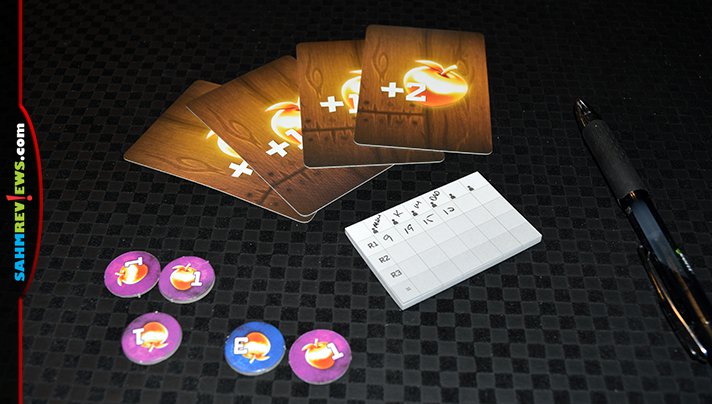 Once your 11th card is selected, the 12th card from the hand is discarded instead of passed and the round ends. Everyone tallies up the total of their point tokens and Reward Cards and the game is reset so another full round can be played! The box recommends keeping the game to two rounds as you learn the game, but we found that two rounds is the perfect length even after you know all the rules. This keeps the overall playing time to under 15 minutes!

You’ll find your copy of Fruit Ninja: Combo Party on Amazon for under $20, or ask your local game store to order one for you! If you haven’t picked up Zombie Tsunami (also by Lucky Duck Games), maybe they’ll make you a package deal! Either way, be sure to check out Lucky Duck’s website to see what they’re working on next – including a brand new Kickstarter campaign for Kingdom Rush: Rift in Time! Fortunately we were following them on Twitter and Facebook so we knew all about it as soon as it went live!

What is your favorite app you’d like to see in an offline version?