With a packed schedule, I knew our interviews for Captain America: Civil War would be fast and furious. Back to back with time enough for a handful of questions, a group photo and a wave goodbye to the talent. This week and next, I’ll be sharing tidbits from each of the exclusive interviews including actors Emily VanCamp, Paul Bettany, Elizabeth Olsen and Jeremy Renner as well as directors Joe and Anthony Russo. I was looking forward to all of them, but none more than the opportunity to see and present a question for Captain America himself, Chris Evans. I wanted to know if he was as much of a gentleman in real life as his character, Steve Rogers.

Our interviews took place at The London Hotel in West Hollywood. The entire venue was filled with numerous media outlets simultaneously conducting interviews with various members of the incredibly loaded Captain America: Civil War cast. To our surprise, Chris Evans decided to arrive early for his interview and walked in while we were in the midst of chatting with Paul Bettany. From the minute they saw each other, you could see the respect and admiration between the two actors. Chris joked with Paul about how poised and polished he looked during a candid photo in a prior interview then proceeded to pull out his phone to show our entire group. His demeanor and actions were the first indication that the characteristics that I admire in Captain America are part of Chris Evans’ DNA. 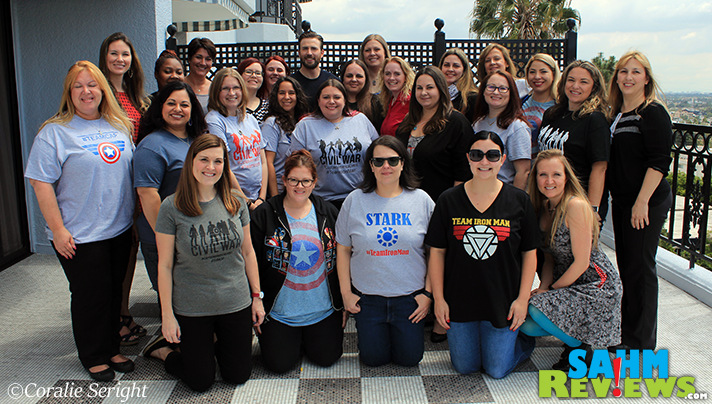 Chris sat beside Paul and we had an opportunity to ask a few questions of the two of them. When we wrapped the interview with Paul, we assembled for our group photo with him, then stayed in place as Chris stepped in for the next photo. He moved about trying to find the right place to stand; concerned with whether everyone could be seen well enough in the picture. When it was time to return to the interview area he stepped aside and invited each of us to enter the room before him. Knowing I had a seat near the door and that his was near the other end of the room, I encouraged him to enter before me. He placed his arm behind my shoulder and moved me forward, explaining that he didn’t mind waiting. Yes, the perfect gentleman. 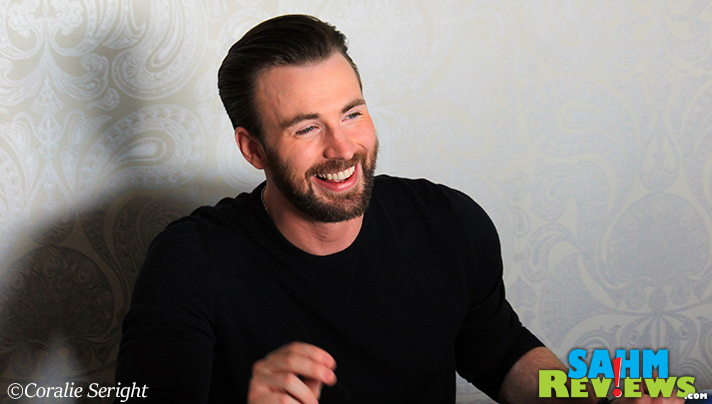 After witnessing some comical banter between Chris Evans and Paul Bettany, someone inquired whether there are pranks on the set. Chris Evans responded, “…Everyone wants there to be pranks and it’s not so much pranks as it’s just a camaraderie. You know what I mean, I think we’re all- when you’re on set…you really are there to work.” He went on to discuss professionalism and explained, “On these movies there are people who are really there to work and so you don’t want to diminish their experience or disrespect their process…there are certain actors who really are austere in their approach and you really want to respect that.” Yes, his work ethic is much like Captain America’s. 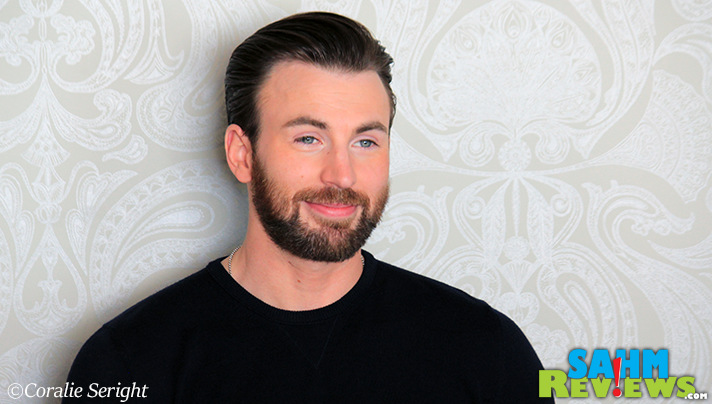 Someone asked Chris how he felt when he puts on the suit and he was ever so humble. He said, “I feel good now, I didn’t in the beginning, in the beginning it was terrifying.” He went on to praise the work of the Russo Brothers and Marvel, “They’ve proven themselves time and time again to be great filmmakers and now, it’s like a point of pride. …When you see the suit, you’re excited to get the suit on and you’re very honored and humbled that you get to have some sort of a connection to it, because it is bigger than you. Captain America will live on, there will be other Captain Americas, there will. It will live on…a lot longer than I will. So it’s just nice to kind of have a little place in its lineage.” More Captain Americas? It was very interesting hearing him say that. 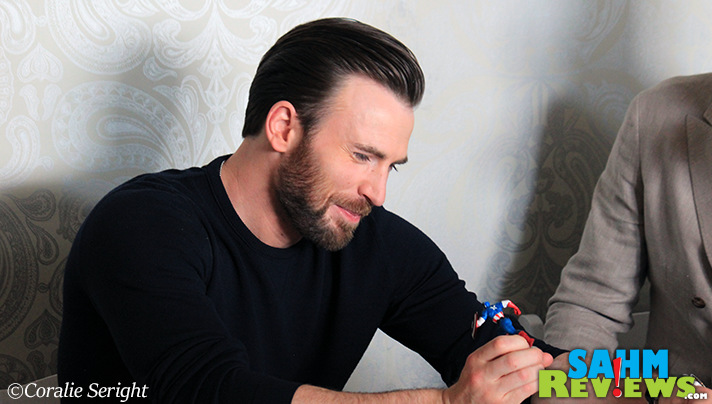 It’s always cool to hear more personal information about people we look up to and Chris Evans is no different. When asked who he looked up to, his answer was shocking. A super hero? Nope. His sister. “Whatever Carly wanted to do, we did…My Little Pony and Care Bear that was it…Just being in Carly’s room was a big deal…just sit here whatever she gives us to play with, that’s what we’re playing with…it was My Little Ponies, Cabbage Patch, Care Bears. So comic books were not on my radar. I liked Star Wars, which was maybe the coolest thing about me, but that was my dad being like please, please like Han Solo and I was like, but Tender Heart Bear… it’s not untrue, it’s really sad.” Personally, I think it’s sweet. A young Steve Rogers possessed soft and caring qualities that made him the perfect candidate for the Captain America program. I bet he would have liked My Little Pony and Care Bears, too. 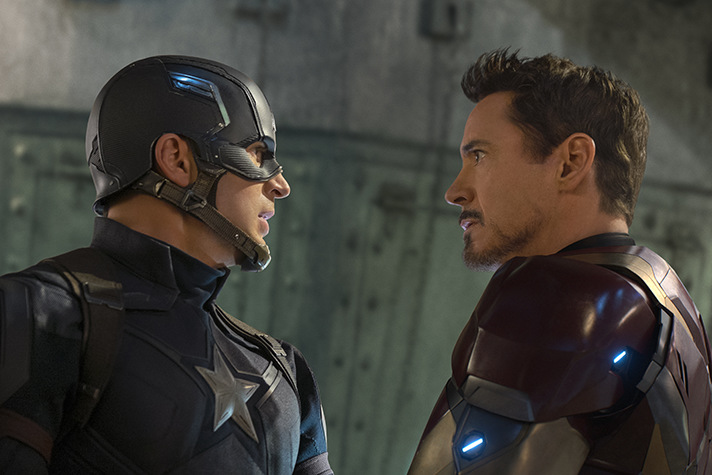 Many other questions were brought up including one about how he prepared for a 100 year old character. I saw that as a great segue into my question. Since he was a character that transcended different generations, I asked, “If you could go back in time, and have dinner or a conversation with someone from history, who would it be with?” He leaned to the side and paused to ponder then leaned up and looked me in the eye, “That’s tough, that’s tough…I might say someone like, Gandhi, I might say someone like Lincoln…but I think maybe for me, maybe- maybe someone like…JFK. I would just be really interested, because…I really do think politics is an amazing landscape. I think it’s a really tricky thing…to be a politician, even being an actor. Imagine being a politician, where you have to back everything you say. You have to be able to be real, you have to be honest, you can’t be so political. You have to just be a plain speaking human. And I think where politics struggles is when politicians become too political. You know, and I think JFK was one of the last guys that felt to me like he’s speaking like a human and it feels like a man talking. And he was tackling enormous issues of the time. So and I think it’s a real interesting, uh, dichotomy. Of being in this austere position of, of politician at the time when the country needed so much and he kind of had to marry so many difficult challenges. People really didn’t want him to win either, I, I mean like look. They shot him you know what I mean in the end they got him. So It’s, to me he is one of the most interesting characters that I can think of, I’ll say JFK.” And while I thought his answer was amazing and well-thought, part of me felt like Captain America was subconsciously sneaking in a little there… because politics is the basis of Captain America: Civil War.

Chris Evans was fantastic to interview and he met my expectations. His personality in real life and his on-screen persona sure have a lot in common. You can see Chris Evans in action when Captain America: Civil War opens in theaters on May 6th.

Will you be cheering him on during the movie? What would you have asked Chris Evans in an interview?

22 thoughts on “The Gentleman Behind Captain America, Chris Evans #CaptainAmericaEvent”