When the buzz started about Captain America: Civil War, I kept hearing “Agent 13” this and “Sharon Carter” that. Maybe Stan Lee would revoke my Marvel fan club card, but I just couldn’t figure out why she would be such a big deal in a movie divided between Team Cap and Team Iron Man. Our family had previously watched all the movies as well as Agents of S.H.I.E.L.D. and other Marvel series, but her only appearance was in Captain America: The Winter Soldier and that was pretty minor. Peggy Carter, I get. She goes back to the beginning of the Captain America story line. But Sharon Carter? Someone was going to have to sell me on why she was so important.

Leading up to my trip to LA for the Captain America: Civil War premiere, I rewatched The Winter Soldier and it hit me like a ton of bricks. How did I NOT see it when I watched it before? As with every Marvel movie, there are so many layers, so many buried stories, so many nuggets of information that you only catch after watching the movie several times. In some cases, you have to rewatch something after a subsequent movie just to realize there were teasers that you had missed. Sharon Carter is one of those little bits of gold that I completely overlooked in the chaos of The Winter Soldier. 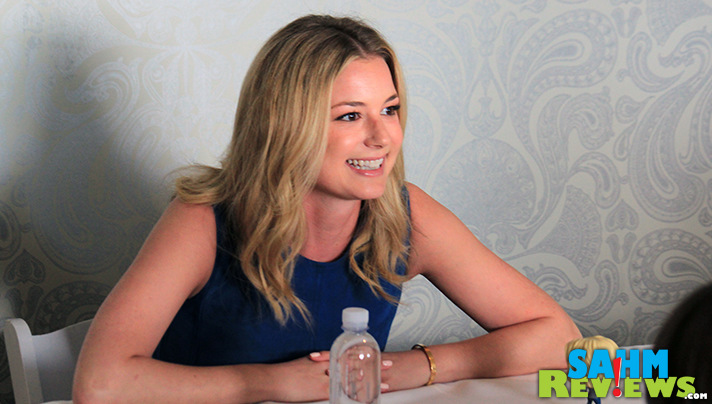 During our exclusive interview, we asked her several questions about her role, preparing for it, what side she was on and more, but let’s cut to the chase and discuss the most interesting request with respect to her character’s future: “Tell us about the kiss.” This was a question she had to be careful answering since most people hadn’t seen the movie yet. Lucky for us, we had so she was open to answering it and elusively responded, “It’s kind of refreshing to see Captain in a more intimate situation and…they have this innate chemistry. You know…it was there even in The Winter Soldier I would say so it’s kind of nice to see it finally happen.” She finished her sentence with a little snicker. That was not the response I was looking for! I’m pretty sure I can speak for many women and admit we wanted details about kissing Captain America, Chris Evans! 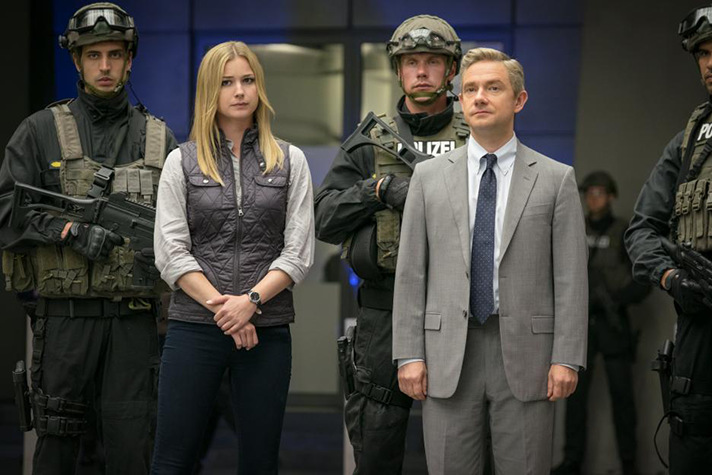 Some members of our SahmReviews.com community presented questions for us to present if there was an opportunity. One such question was whether the red hat would become Sharon Carter’s trademark as it had been for Peggy. Emily’s answer was quick and to the point, “No, I don’t think so. That’s not her thing. She can’t steal it.” But Emily and her character are finding their place. A member of our group asked how she felt knowing she was going down in history as Agent 13. “It’s really cool. It’s really cool. I mean being a part of this universe is really a special thing especially with the movies that they’re making and how good they are…it’s really, really cool…these movies could have been very sort of surface level but what I love about Marvel is how they delve into the characters. They sort of give us the freedom as well to, to create a version of the character that hopefully the fans will like and it’s a really fun process. So the fact that people love the movies is like an extra bonus.” 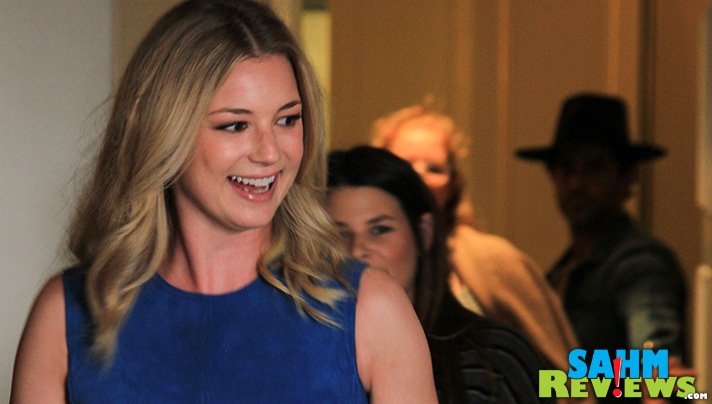 As with anyone who plays a character in a superhero movie, it’s interesting to know who they looked up to. While Chris Evans said his sister played that role, for Emily VanCamp it was quite different. She explained, “It’s really interesting…I was obsessed with the Ninja Turtles, I’m not gonna lie. I was one like four years in a row for Halloween and I was trying to figure out do they count as superheroes, I don’t know but that was my thing. I mean…probably inspired some of these characters I really like to play, I don’t know. I wanted to be the Ninja Turtle. I think I was like Donatello one year and then like Michelangelo like three years ‘cause I love pizza.” 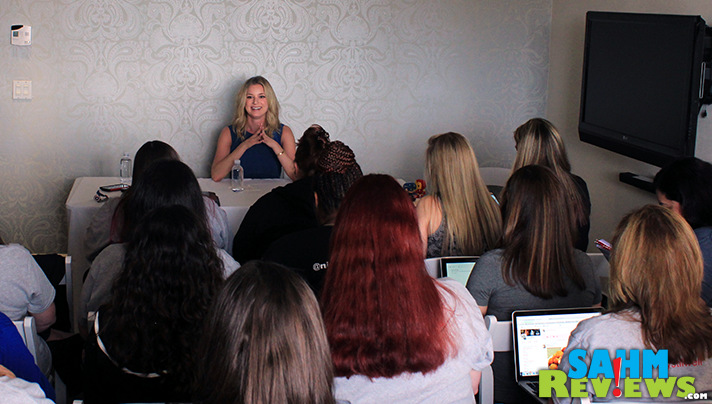 The common theme among most of the questions asked involved her role itself, how she prepared for it and how it compared to other roles. When asked what part of herself went into the character, Emily shared her thoughts on Sharon Carter’s ethics, “What I love about Sharon is her moral compass. I think she has a really strong moral compass and I think that’s what her and Steve initially sort of identify with each other…I love a girl with a strong moral compass and a lot of integrity and I think she really has that…you see her struggle with that within this film because she’s battling her work and her loyalty to her work. But Cap is rebelling against that and it’s like is she gonna follow her head and her heart…and we ultimately see what she does…I think people can relate to that struggle.”

A few different questions were presented regarding the physical preparation for the role and one of her responses was very similar to Elizabeth Olsen, referencing how a background in dance helped her prepare. With respect to choreography, she explained, “I really only have one proper fight sequence when she’s going up against Bucky. So, I probably didn’t need to do as much training as I did but they have the most incredible stunt team ever and they sort of get you to a place where you’re really, really comfortable with the movement and you work it…it’s always challenging but it’s a lot of fun to be honest. I really love it.” Emily also said regarding physical preparation, “It’s just a lot of working out really. I had already sort of done some training for Revenge so it was like an easier segue into the films but you wanna go into these movies feeling really strong and feeling fit and I wanna be able to keep up really. We were wrapping Revenge while I started training for the movie which is very interesting and I kind of realized how much I should have done that for Revenge…I was fit doing Revenge but I was like oh, this is another level. I’m just not really good going into it…it’s fun. I love that stuff. I was a dancer so all that physical activity’s great and sort of helps with the sequences and stuff ‘cause ultimately it’s choreography.”

I’m glad she mentioned Revenge because one of our community members wanted to know how Emily’s characters in Revenge and MCU compared. “Meaning Emily Thorne and Sharon Carter? Someone asked me who would win in a battle the other day. And I was really thinking about it because I think Sharon’s incredibly technical and has this obviously like this very serious real training…but, I think Emily would win because she’s so tortured. She’s just fueled by so much anger so I kind of feel like when she unleashes the rage it’s like ‘see you’. But I, but I think it would be a really close fight. I think it would be a close fight. Sharon might just be missing a little bit of an edge.” But did Emily Thorne ever battle a 100 year old cyber-enhanced Bucky? I think not. 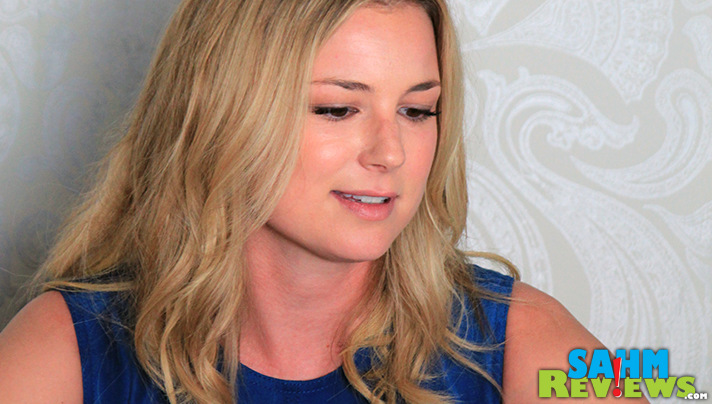 We think Sharon Carter is a rockstar and a great role model for young women. As I mentioned in the article about my interview with Elizabeth Olsen, it is commendable that Emily VanCamp and Elizabeth worked with Marvel to promote STEM education. When asked how she felt about portraying a character that would be such an inspiration to young women, her quote was one of my favorite from the entire day. “I always hate it when I hear actors or musicians or people in the public eye say that they have no obligation to be any sort of role model because it’s not that you have an obligation but you have a choice and why would you choose to empower young women…use yourself as a vehicle when you have a voice to kind of inspire that. I don’t see why you wouldn’t. I mean that’s not to say I’m always gonna play this kind of character…I have wonderful women in my life and I just wanna see girls have the best opportunities they possibly can and if I can inspire that in the tiniest way I don’t see why I wouldn’t.” Well said, Emily. That’s exactly why you’ll be an awesome role model, not just to young women, but to everyone.

Captain America: Civil War opens in theaters on Friday so I hope you plan to go. If you can’t make it on Friday, it would make a nice family date for Mother’s Day!