As you know, we’re members of the Netflix Stream Team. Each month they send us details on upcoming series and give us sneak previews of new shows like GLOW or early access to the latest season of Orange is the New Black. They also share with us some of their latest marketing strategies such as sneaking in Mom time or female role models. Sometimes we align with their suggestions while sometimes we go out on our own to provide Netflix cheat codes or share about an underrated Netflix series.

But this month I’m baffled. They gave us flow charts for when we need to convince family or friends to watch something like Star Wars or Marvel on Netflix. Here’s an example:

Is that a thing? Does anyone really need to be convinced to watch Star Wars? After all, it’s Star Wars! Right now you can stream Rogue One in addition to 6 seasons of the Clone Wars series or movie. My generation has a nostalgic appreciation for the original movies and the new chapters tie into that. Younger generations appreciate the new chapters with an excitement for the originals that put it all into perspective. Why the need to persuade anyone?

And don’t even get me started on Marvel! It’s not like there’s only one show type of Marvel on Netflix so it’s not a one-size-fits-all choice.. Cartoon and live action; cinematic universe and comic book universe; for mature audiences and younger audiences, teams of heroes and single heroes. The choices are many! Here’s a glimpse at a fraction of them!

There’s a variety of options – from traditional Captain America (and the remarkably awesome Chris Evans in Civil War) to Benedict Cumberbatch in Doctor Strange. There are shows like Avengers Reassembled and Maximum Overload for the Lego crowd.

If you’re a sports fanatic, you can even watch a documentary that parallels the connection between elite athletes and Marvel super heroes. The cast includes household names such as Cal Ripken Jr., Tony Haw, Danica Patrick and Brandi Chastain who represent a variety of professional sports organizations.

There are comic book versions of shows and some throw-back movies among other shows, too. Of course, Netflix offers SEVERAL original series including Daredevil, Jessica Jones, Luke Cage, Iron Fist, The Defenders and coming soon, Punisher. These are more geared toward an older crowd while Agents of S.H.I.E.L.D. meets the requirements for prime time network television. Here’s a great video that puts into perspective how I feel about Marvel on Netflix:

With Marvel on Netflix, there are so many choices covering different themes that I just don’t get the need to try to convince people to watch it. My Marvel Netflix flow chart would look something like this. 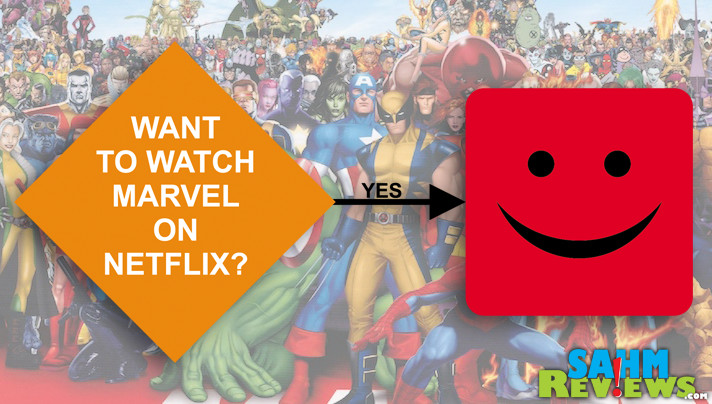