We’re among the fans of the Marvel Cinematic Universe that makes us want to seek out all of their other characters and products. We’ve watched nearly all the series on Netflix, never miss an episode of Agents of S.H.I.E.L.D. and actively seek out board games with Marvel themes. We like to think we’re up-to-date on everything Marvel. But every once in a while something comes along that reminds us that we’re just fans, not super-fans.

Back in 2010 we started seeing trailers for a new movie called “Kick-Ass”. At first we thought it was a parody of superhero movies since we didn’t know anything about the license. It turns out it was based upon a comic book published by Marvel and written by Mark Millar and John Romita, Jr. The movie piqued our interest in the story and we searched out copies of the series at our local comic book shop. It was a rare case of the movie introducing us to the characters and story, rather than the other way around where we eagerly await a movie’s release because we’re already huge fans of the story.

That was nearly ten years ago and wasn’t the last time we walked into a theater knowing nothing about the backstory and then leaving with a desire to search out the comics/books/etc. to experience more. Those are stories for another time. We were reminded of this experience with Kick-Ass when CMON released their newest board game by the same name late last year. Knowing we love everything Marvel, they knew our family would love it – especially since it is a cooperative game! 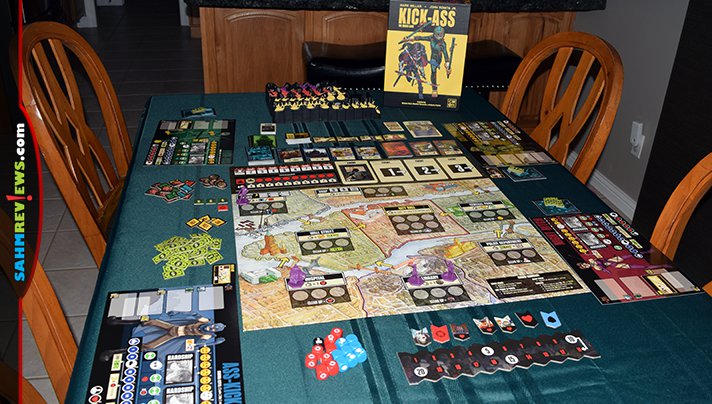 A bit of a warning – the original Kick-Ass move was R-Rated and some of the content and images in the board game version might encroach on that rating also. CMON advertises the game for ages 18+, but we feel confident altering that a little lower to 14+. It’s not that there is much content that is inappropriate, it’s more of the subject matter of guns, violence, language and the sort. Keep this warning in mind if you’re intending it to be played by preteens, but it’s nothing your teenagers haven’t heard or talked about in high school.

If you aren’t familiar with the backstory, Kick-Ass is about a group of young vigilantes who are fighting evil villains without the support of local authorities (think Batman). They don’t have any real superpowers, just the willingness to risk their lives to do good. In the Kick-Ass board game, you’ll get to become one of these heroes and work with your friends to reveal the villain’s plot!

Designed to be played solo or with up to four players, Kick-Ass is a scenario-based cooperative game that can be completed in under 90 minutes per session. Each person gets to choose their hero from a pool of seven and every game will feature a different villain along with an associated final boss! All characters and opponents are represented by highly-detailed plastic miniatures, perfect for painting! 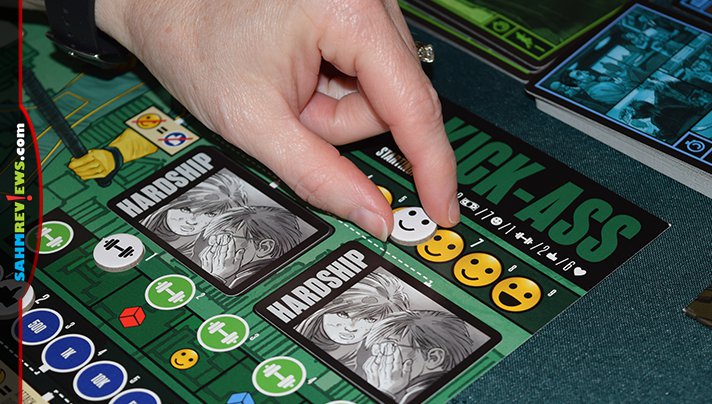 Heroes will track their important (to them) statistics throughout the game. Happiness, Strength, Social Media and Life (Health) are all items that warrant constant attention. Your character can receive equipment upgrades and suffer hardships if key stats dive below acceptable levels. Keeping your stats high while upgrading your character are keys to being successful in defeating the villain. 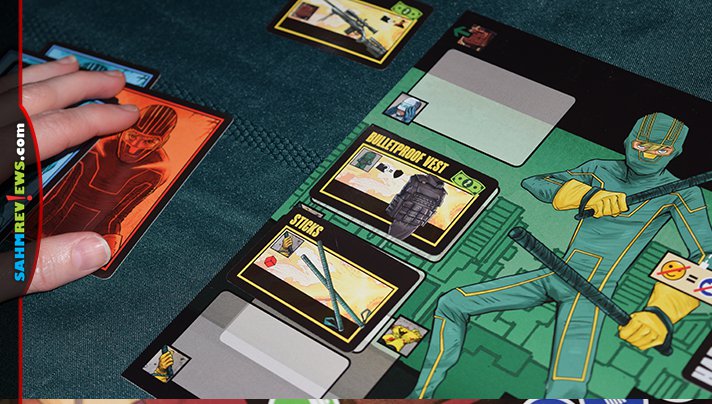 Kick-Ass is played over a maximum of nine rounds, each divided into four phases. At the beginning of each round an event is revealed which must be overcome. You have time to do so, as the villain isn’t successful in completing their plan until the card slides over and leaves the board (each time a new card is added, all cards shift over). 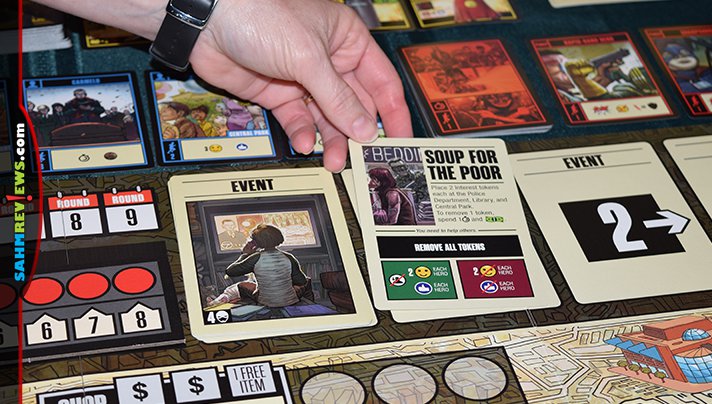 The second phase, called the “Day Phase”, is further split into three parts – Morning, Afternoon and Night. For each part of the day one Minion Spawn card is drawn and its effects applied. These typically penalize the heroes and/or add new minion spawns to the board. Unless you get a Super Minion… 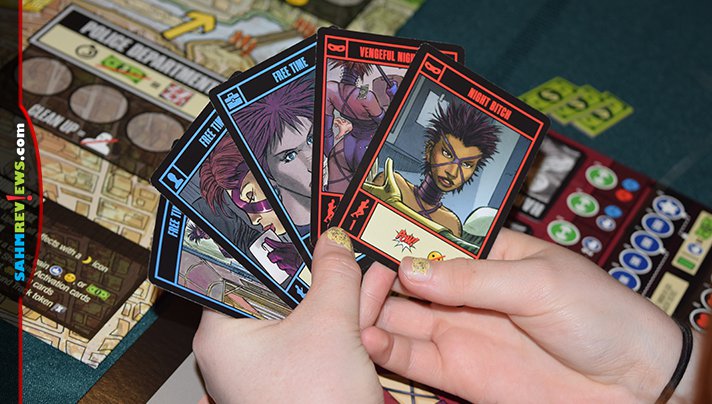 Players interact with the game by playing Activation cards. Discussion about what to play is encouraged since everyone is acting as a team. Each person chooses one card from their hand and plays it simultaneously. Since you’re working together, the cards can be resolved in any order the team decides. The Activation cards give players movement, award bonus effects and might have limitations depending upon the district of the city your character is in.

Speaking of Districts, each one has a graphic printed on the board that dictates how the players may interact with it during the game. Districts have Timer Effects that can be triggered by the Activation Card, a Clean Up Bonus that is awarded when all enemies are removed from a district and Limits that denote how many Minions/Super Minions may be present at any time.

Playing a card with a Fight icon allows you to take on the bad guys. You’re not fighting just one, but every single enemy in the district, so make sure you’re ready for the task! Add up the power of all the minions present and roll all the indicated dice. The Hero may divide any damage done among the enemies however they see fit. Fortunately they die easily, having only one (minions) or two (super minions) life points each. Bosses are a different story, each having their own life point value. 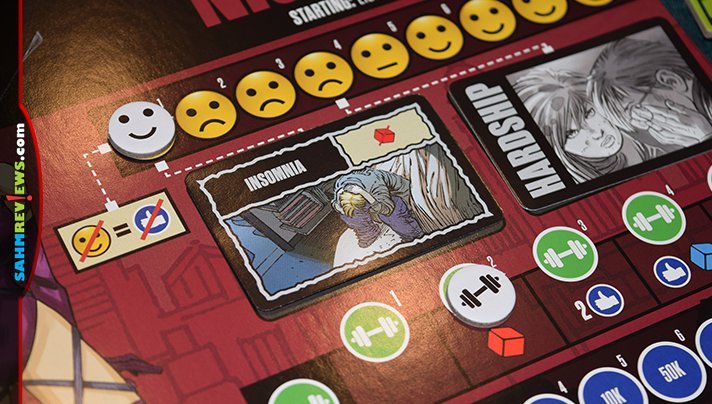 Heroes don’t really die in Kick-Ass, they Faint. When their life track gets to the Faint space, they roll the Faint die. If the result is a blank face, nothing happens and they stand back up, ready to fight. If a Faint face is rolled, the hero falls unconscious and wakes up in the hospital. While they do get all their Life Points back, they are disturbed by the experience and as a result their Happiness falls to the next Hardship space, earning them a Hardship card immediately. 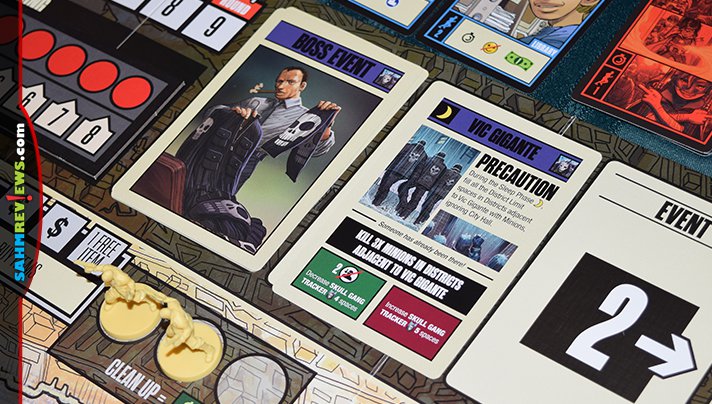 After all players have resolved their cards (and the three parts of the Day Phase have taken place), the Sleep Phase begins. The Docks, Hero dashboards and Event cards are checked to see if anything is triggered by the Sleep Phase, and if so, resolve them immediately. It’s also time to see if the Final Plot must be revealed. This occurs if the players have managed to successfully complete three Events! This begins the final phases of the game where you’ll deal with Boss Event cards and inevitably the Final Boss! No spoilers this time, but if you manage to successfully complete the Final Plot’s objectives before the end of the ninth round, the Heroes defeat the Final Boss, save New York and win the game! 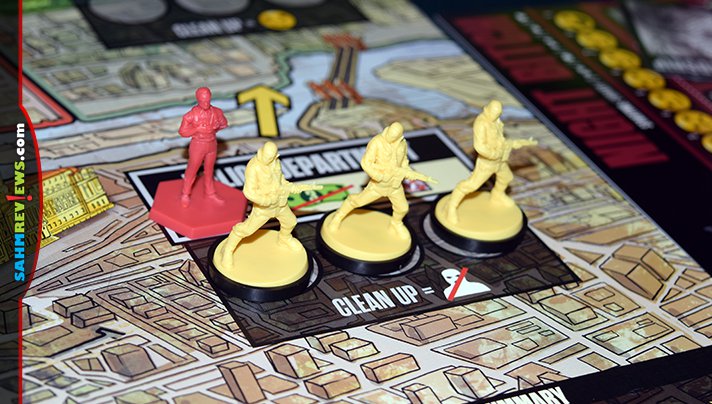 Of course there are lots of ways to lose as well. The Heroes will immediately lose if they try to spawn a minion to City Hall and cannot do so because the District is already full. They’ll also fail if they cannot complete three events (if four have expired). And of course, if they do not solved the Final Plot by the end of the last round. Simple, right? Not as easy as it sounds – trust us!

Our family loves all types of cooperative games, and Kick-Ass is no exception. We have very few scenario-based games that don’t require someone to play the bad guy, so this example is perfect for us (even though the girls LOVE attacking dad whenever they get the chance to in other games). Right now you can get it much less than the $60 MSRP on Amazon or check with your favorite local game store to see what kind of deal they can cut you!

Speaking of themes that we’re fans of, over on the CMON website are details about their latest release, Wacky Races! This is a cartoon that I grew up with and can’t wait to try out this new board game implementation. Copies haven’t hit our local stores yet and we’re hoping someone will have one at the Origins Game Fair for us to try. Until then, we’re closely watching their Facebook and Twitter feeds to learn more!

Have you seen either (or both) of the Kick-Ass movies?

Tags: board games, CMON, Cool Mini or Not, cooperative