Waayyyy back In the early years of our marriage, Scott and I owned various types of fish. Fancy goldfish of different types, mostly. Telescope, Bubble eye, Lionhead and Fantail were among the types we nurtured at one point or another. When we moved to Los Angeles, we weren’t able to take them with us, but I still loved being able to admire these beautiful creatures whenever possible. I was absolutely enamored at the variety of Koi we would find everywhere from parks and botanical gardens to the lobby of hotels and restaurants, most that were far larger than any I had found in the Midwest. All these years later, it still brings me a lot of joy to simply stand alongside and watch them.

We’re back in Iowa now and don’t have the room for an aquarium nor do we see Koi ponds like we did in the warmer climate. But we’re fortunate to be able to put a temporary one on the table thanks to Smirk & Laughter Games and their KOI board game! 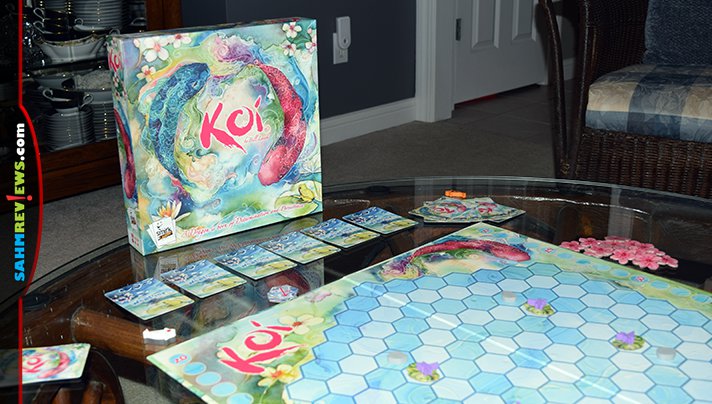 Scott and I first encountered KOI when Curt Covert invited us to play test it a year ago at Geekway to the West. The prototype wasn’t quite finished but it was good enough to give us the lay of the land (or in this case, pond). Accommodating up to four players as well as a solo mode, KOI is pretty easy to set up. Place the double-sided board in the center of the table face-up based on player count with Lily Pad and Rock tokens also placed based on the number of players. One Dragonfly token lands on each Lily Pad space and remaining tokens are gathered into a general supply within reach of all players. Select your favorite color Koi and collect the two matching pieces, keeping one for movement and putting the other on the scoring track. Separately shuffle the KOI and Weather decks then distribute according to the player count noted in the rule book. You’re now ready to play! 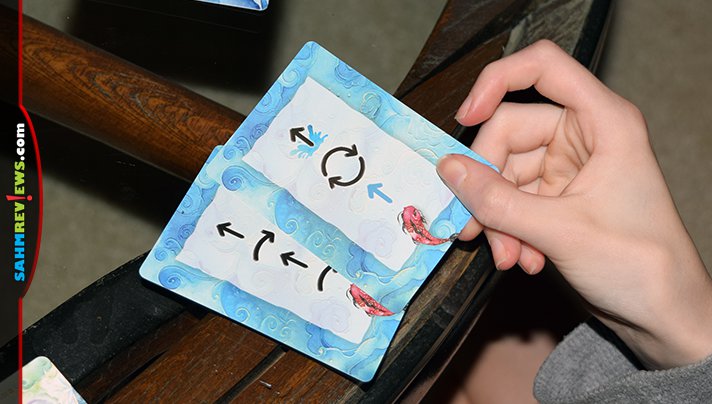 Starting with the first player, each person takes their turn based on the cards in their hand. You may play and resolve KOI cards from your hand, discard and redraw or end your turn. There are two different types of KOI cards: Movement and Natural Beauty. Movement cards do exactly as they sound; they allow you to move your piece around the board according to the arrows on your card. Working from the bottom of the card to the top, blue arrows are optional while black arrows are mandatory. 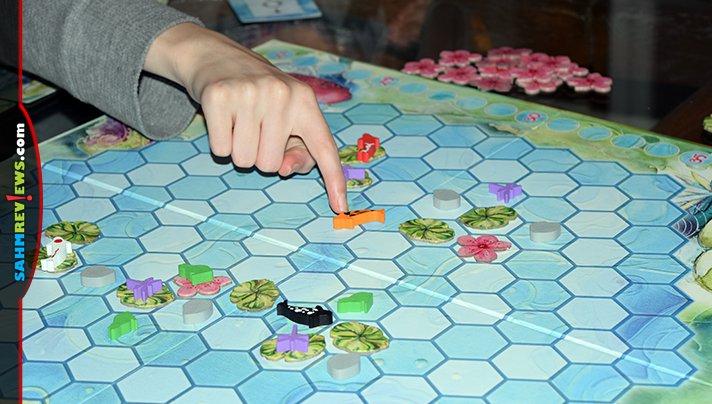 The goal as you move throughout the board is to pass through and collect Dragonflies and Frogs, worth 3 points and 1 point, respectively. Last I checked, fish cannot swim backwards so it’s important to recognize that the way you place your piece on the board matters. It swims forward then can rotate to swim in a different direction. 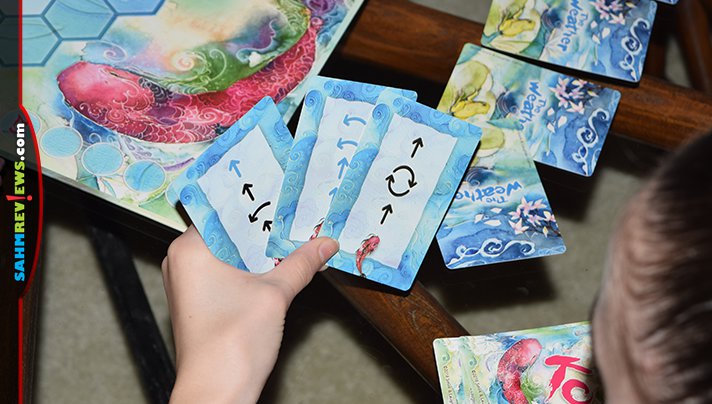 If you opt to play a Natural Beauty card, you may place the matching token onto the board. Rocks are obstacles that impede movement while Lily Pads can be occupied by Koi. Empty Lily Pads are where Dragonflies spawn! Frogs, on the other hand, eat Dragonflies but can be eaten by Koi. Cherry Blossoms disrupt the pond when they land in the water, causing ripples and making the items and player pieces drift away one space. 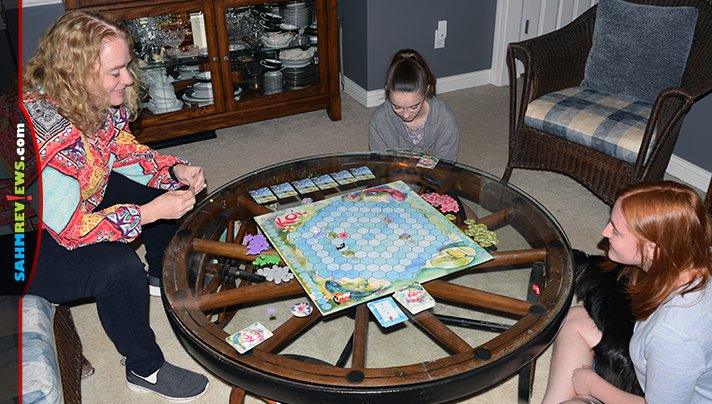 While Koi are peaceful and beautiful to watch, nature isn’t always so kind. Floods are nature’s way of restoring balance so at the end of any player’s turn, if there are no dragonflies remaining on the board then a flood occurs. All player pieces are swept to the edge of the board and the lily pads are repopulated with dragonflies! 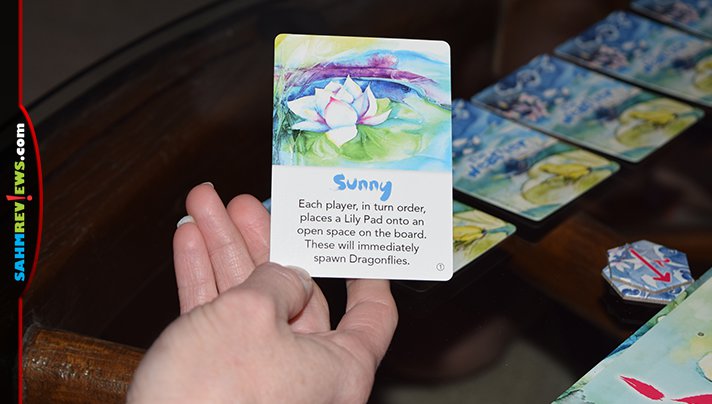 After each player has taken a turn, everyone turns in their Dragonflies and Frogs and records their progress on the scoring track. A new day will begin with the player who has the lowest score. But before that happens, weather sets in! A card is revealed from the Weather track, causing a flood or shifting winds. Empty lily pads are repopulated and players each draw three more cards. Play continues for seven total days and the player with the most points wins! 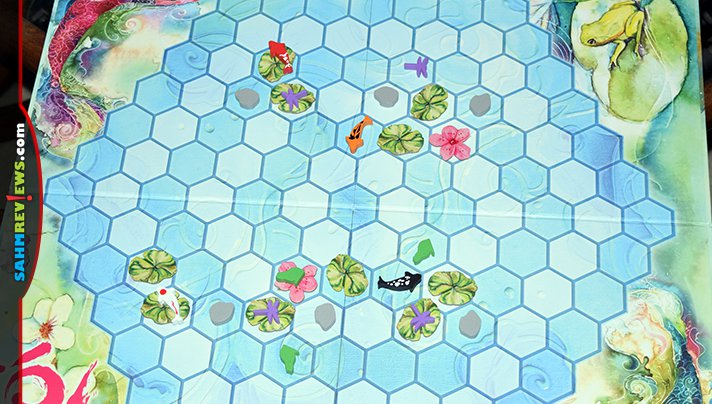 KOI can be a soothing game when played with casual players but an aggressive game when played with strategic opponents. Either way, it’s a fun representation of what happens in a Koi pond! If you’re ready to make a splash, pick up a copy of KOI on Amazon or from your local game store. Smirk & Dagger and Smirk & Laughter released new games at Origins Game Fair and have others scheduled for Gen Con this year. Follow them on Facebook and Twitter to reel in the details!

Have you ever had pet fish?

18 thoughts on “Koi Board Game Overview”