We recently shared exciting news about game designers Daniel Skjold Pedersen & Asgar Harding Granerud starting their own company, Sidekick Games, to publish one of their latest creations, Bloom Town. The fact that they have their own company now doesn’t mean that’s the only place you’ll see their games. Like any good designers, they have more in the works and too many to handle on their own.

Days of Wonder just recently released another of the pair’s concoctions, Deep Blue, a board game about diving for sunken treasure. I grew up watching television specials about Mel Fisher and especially his discovery of the Atocha, a Spanish galleon sunk during a hurricane off the Florida Keys. When the news hit in 1985 that they had found the ship and a good portion of its treasure, it was only natural to dream about treasure hunting and finding sunken treasures.

In the Deep Blue board game, you can realize those dreams without leaving your house! You and up to four other players each are part of competitive diving teams searching the waters for wreckage. Each boat has access to the same map, so the rush is on to be the first to a site and grab as much of the booty as they can!

Setting up the game is pretty quick and random tiles means each play-through will be different. The board is placed in the center of the play area, six starting Wreck Tiles are shuffled and placed facedown on the marked spaces while the advanced Wreck Tiles are also distributed in the same manner. A secondary board, the Dive Site board, is placed near the main board along with the Diving Bell and a supply of Victory Points tokens. Gems are put in the indicated space on the main board and the rest are put into the included cloth bag. One Captain’s Log scenario card is chosen, which will slightly alter the rules for the game and only affect the Sunken City areas. 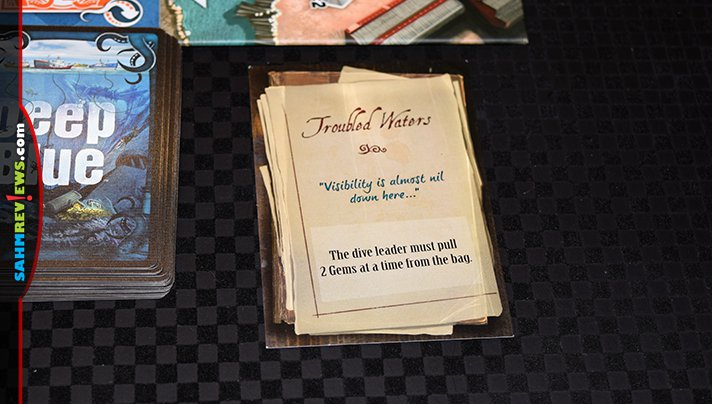 All players receive two Boats in their chosen color, a matching player board, a starting crew (4 cards in their color) and an empty plastic treasure chest. The 30-card deck of Crew Member cards are shuffled and placed below the $4 space on the main board. The four topmost cards are revealed and placed in order, beginning with the $1 spot, creating the Market. If any of the cards show a colored gem with a +1 symbol, take a matching gem from the supply area and add it to the cloth bag. A start player is chosen and everyone receives Starting Tokens (one or two) according to the player order. 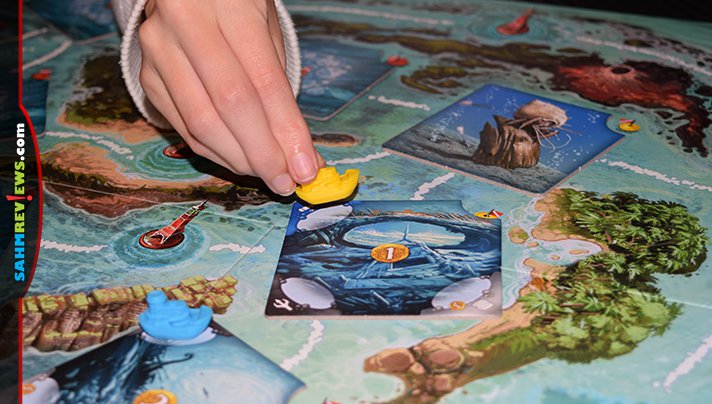 Proceeding clockwise around the table from the start player, each person will choose one action from a list of four available: Recruit a Crew Member, Sail, Rest or Dive. To recruit a new member, play enough cards from your hand containing the cash icon to pay for whichever card you want from the Market. This new crew member is immediately put into your hand, while the cards you used to facilitate the purchase are placed in a personal discard pile, signifying your “resting crew”. If you don’t like any of the available crew members in the Market, you can always pay $4 to discard them all and refresh the market, taking any of the new cards for free! 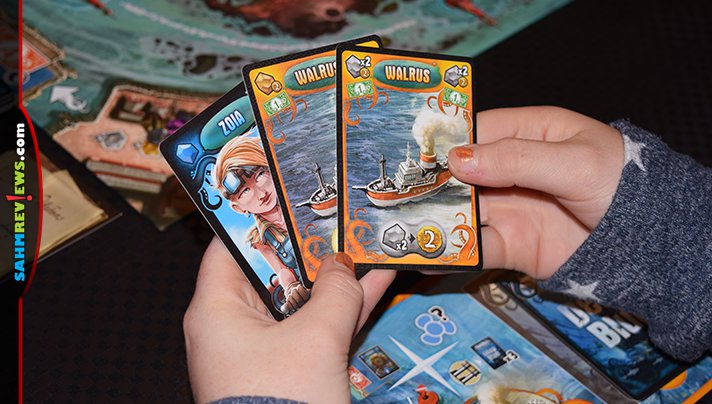 Cards in your hand are also used to Sail your ships out towards wrecks. Play one or more Crew Member cards from your hand that contain propeller icons and move your boats the same number of spaces on the main board, following the printed routes. You can move one boat all the movement spaces or split the total among both of your vessels. When you stop your movement(s), check their location. If you ended on a faceup Wreck Tile, place your boat on one of the empty colored scouting spots (your choice). If they are all occupied, your boat remains in the middle of the tile. If the tile was facedown, flip it over and again choose one of the scouting spots to place your ship. If you end on an empty diving site or navigational buoy, nothing happens.

Resting during your turn means you can shuffle all the cards in the Resting Crew area of your player board and draw the three topmost cards into your hand. There is no hand size limit and you can take this action even if you only have one or two cards in the discard pile.

The main action of a game of Deep Blue is the Dive. You can only take this action if you have one or more of your boats currently on a Wreck Tile. When you take the Dive action, you become the dive leader and will head up the hunt for treasure on this wreck. Take the Diving Bell token and place it next to the Wreck Tile you will be exploring. Any players who have boats on neighboring sites (within one move away) may rush and join the dive by moving their boats to the dive site for free. These may not enter a scouting space and are all placed in the center of the current tile. 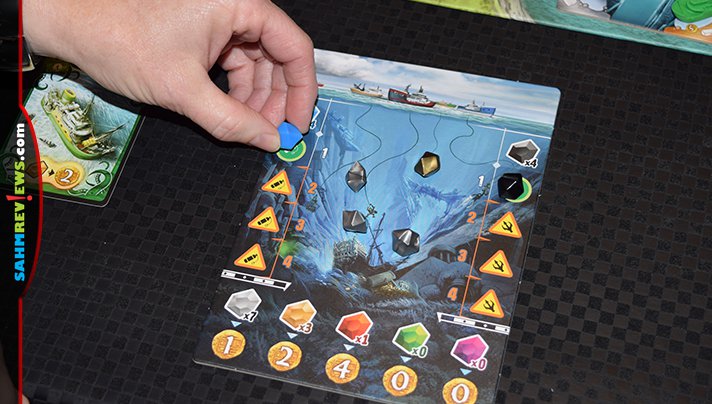 The dive leader then takes the Dive Site board and the cloth bag full of gems. They will blindly draw one gem at a time and place them on the Dive Site board. After each gem is drawn, the leader must decide whether or not to continue the dive. If the dive continues, another gem is drawn and the same decision must then be made. If they elect to end the dive, all players still in the dive will score Victory Points for any gems recovered while the leader will also receive VP’s shown on the Wreck Tile. 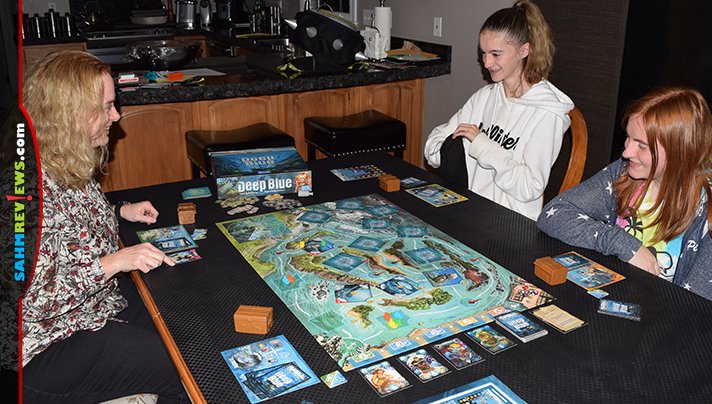 Each red, gold or silver gem drawn from the bag represents treasures that may be brought to the surface, while black and blue gems represent hazards. The first instance of a black or blue gem doesn’t do anything other than provide a warning to all players. When a second example of either of these colors is drawn, all players still in the dive must defend themselves against the hazard by either playing a matching colored card or having their boat in the correct colored scouting spot on the Wreck Tile. If they cannot, they must resurface and lose the chance to score points for collected gems. They will still earn points for any cards they played up to that point. 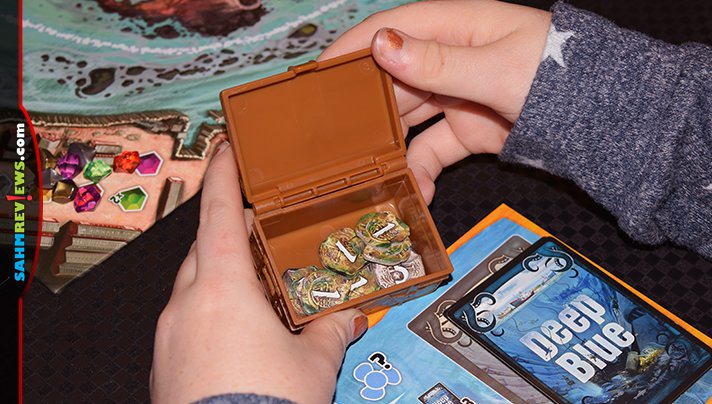 After each gem is drawn, players still in the dive may play one or more matching Crew Member cards from their hand to score points that they will collect at the end of their dive. Some cards require only one matching gem, while others will demand either several of a color or a certain total number of gems. After collecting the points listed on the cards at the end of the dive, these cards are also sent to the discard pile. Once everyone has completed their dive, the Wreck Tile is discarded from the game. If it is one of the four special Sunken City tiles, it is instead put on the dedicated area on the main board. 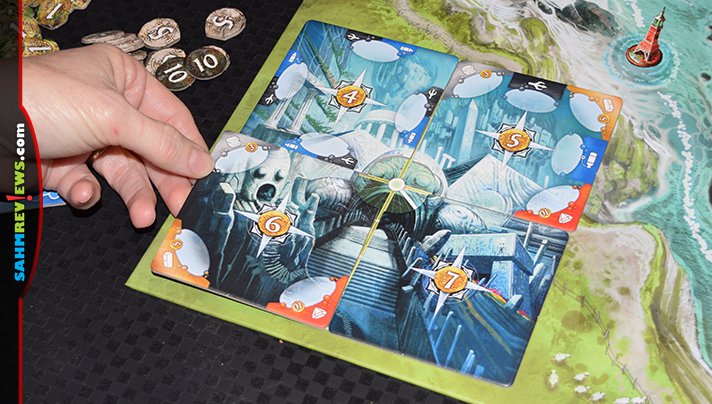 When the fourth and final example of Sunken City tiles is finished being explored, the game of Deep Blue ends immediately. Players count up their Victory Points (conveniently kept hidden in their personal treasure chest) and compare scores. The person with the highest total wins Deep Blue! If two or more players are tied for the most points, the person with the most Crew Member cards (active and/or resting) is declared the winner!

Accurately advertised for ages 8+, Deep Blue is a little more expensive than other games targeted towards this market. Don’t let that stop you from picking up a copy on Amazon or at your favorite local game store. Upon opening the box you’ll immediately understand the reasoning behind the higher price once you see the quality components and custom storage insert. Discover what other treasures Days of Wonder has on their website and sail over to their Twitter and Facebook timelines to find out what else they’re working on!