Newsflash: Thanksgiving is only a couple of weeks away. Hey, I’m not any happier about that than you are because I’m having to admit that time keeps slipping through my fingertips. Seems like not long ago we were packing up the winter clothes, making plans for travel to summer board game conventions and making wish lists for Gen Con. Now we’re faced with an unreasonably early winter (yes, snow for trick-or-treaters) which has resulted in us thinking about holiday gift guides (coming soon!) and Christmas-themed board games. Since Thanksgiving is the next major holiday, it only makes sense to put together a list of games that would be thematically accurate to play after a big dinner. Quick spoiler before you start looking at the list… there aren’t any that include “Tofurkey” in the name.

A Fistful of Turkeys

“Some Turkey Games” (aka Metagaming) released this game after Steve Jackson left to form Steve Jackson Games (SJG). The game is printed on a large, single sheet that folds down into a microgame size plastic bag.

More interesting than the game itself are all of the parody touches, such as a bogus author introduction, an angry letter from a customer, a fictional game list, silly versions of major game company logos, and the manner in which “Some Turkey Games” is printed at the bottom of the cover (copying the style used on the early SJG games). 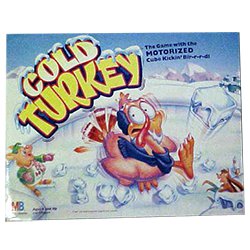 The first player that filled up the tray with six cubes of his/her color wins the game. 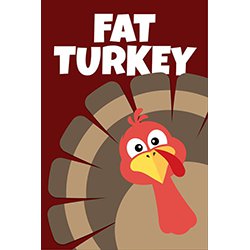 Farmer Jack is busy trying to fatten up his turkeys ready for market. As one of the turkeys your aim is to try and keep your weight down and avoid being selected.

Turkeys select cards from the food pile which will add to their weight. The food pile also includes cards such as Weight Loss, Poop and Feed Me which will enable turkeys to shed weight and distribute their food cards amongst other turkeys. 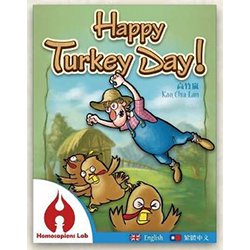 Happy Turkey Day! is a simultaneous-move game with each player taking the role of a voracious turkey. In the beginning of each round, each player takes one of the Action tokens in his/her hands, and places it, face down, on the playing surface in front of him/her. Then, all players turn over their tokens simultaneously and take an action: either grabbing some Food from a Hen House (i.e. Eat), or exercising to trim down a bit 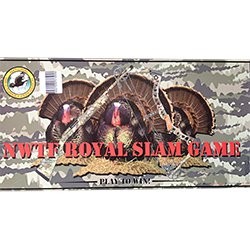 The objectives of the players are to achieve a royal slam and collect 200 experience points by gaining useful knowledge in wild turkey hunting, outdoor safety and nature lore. A hunter achieves a “Royal Slam” by bagging the five subspecies of North American wild turkeys (Eastern, Rio Grande, Merriam, Osceola and Gould).

This is a roll and move game. Players move around a map of North America and hunt for wild turkeys. Strategic choices include type of weapon (shotgun or bow and arrow), money management and playing action cards at opportune moments.

Traditionally it is played around the table, between dinner and dessert. The game gives everyone an opportunity to express their gratitude to God and to each other. When friends and family gather to show their love and appreciation, everyone is a winner! However, we suggest that a prize be offered to the official winner, such as candy, a plant, or a new Christmas decoration. If you don’t have a prize, you can offer something else, like the largest piece of pumpkin pie! Or add your own family tradition. The Thanksgiving Game™ is great for ANY time of the year, and we hope that it will bring you years of enjoyment and meaningful memories with family and friends! 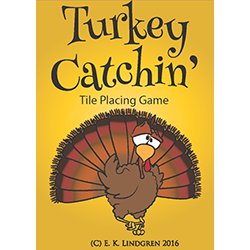 Tom the Turkey is no dummy. He knows that Thanksgiving is right around the corner, and he needs to get out of here before you and your friends fence him in. Players take turns playing fence pieces trying to capture Tom. But with every piece, Tom also makes a move! Plan your moves carefully, but if you get stuck, you can always lure Tom back with Turkey Feed.

The players win if they can make a complete fence around Tom. Tom wins if he makes it all the way off the map before the players fence him in. 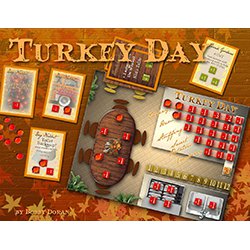 In Turkey Day, you have 12 hours (turns) to attempt to resolve all of the mishaps that might occur while you prepare and cook your holiday meal. Each turn you will have 3 actions but with any luck Gramma or your favorite Aunt will show up and lend a hand. Let’s just hope that Chester doesn’t show up this year.

Turkey Day is a free, simple, solo, print and play game.
Turkey Day was originally designed as a gift to the designer’s extended family.

PRINT YOUR OWN ON BOARDGAMEGEEK! 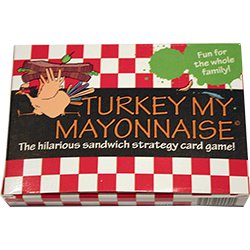 Have you ever built your dream sandwich? Imagine doing that and having a great card game too! Introducing Turkey My Mayonnaise, the hottest new card game on the market!

The object is simple. Be the first to complete sandwich recipes… any way you can. See a piece of cheese on someone’s sandwich you like? Take it with a “Steal” card. Pepperocinis in the discard pile? Time for a dumpster dive! Sandwich combinations are virtually endless so the game is unique every time! 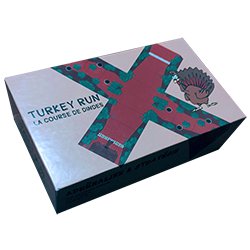 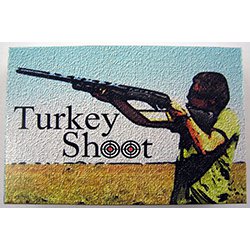 Bring the fun of a classic Turkey Shoot to your table.

Players load their shotgun card with bird shot or a slug and take aim at classic turkey shoot targets. Tilt the back of the shotgun up to dump your bird shot or slug onto the target and see if you can get the best shot and win a turkey. Each turkey claimed is worth points depending on its weight. After 10 events the turkeys are weighed and the player with the most points wins! 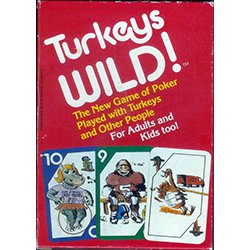 Poker with a special deck that includes six wild cards. Play for points instead of chips. Each winning hand has a value, which is multiplied by the number of “bets” or “gobbles”.

Challenge your family and friends to a fun and educational game about wild turkey hunting. Over 350 questions of varying difficulty, great for hunters of all ages. Score points and become the most knowledgeable whitetail deer hunter! 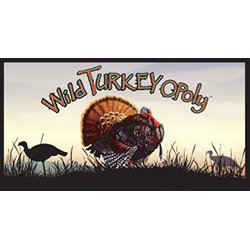 In Wild Turkey Opoly, all of the spaces are real hunting lodges, Clubs and Taxidermists. Such hunting brands such as Primos, Quaker Boy, HS Strut and Jerry McPherson’s Montana Decoy are included on the board as well.

As you make plans for your Thanksgiving feast, allocate some time to take advantage of the gathering of family and friends. Play some of these turkey-themed games, find party games, card games or seek even out games for 7 players or more. At a time of year when stress is high and people are trying to escape from the chaos of work and school, games offer a unique opportunity to bond, laugh, joke and strategize. We hope some of these turkeys are served up at your Thanksgiving.