I’ve always been a collector. I probably picked up the trait from my father who shared his love for collecting stamps and coins with me from a very young age. If he could have afforded it, he would have collected cars. Instead he would sell one to buy another, much to my mom’s chagrin. I still have what’s left of his personal coin collection and a few of the stamps we collected together while living in West Germany.

As an adult the collecting bug is still going strong. Baseball cards, action figures, toy cars – you name it, I’ve probably collected it at one time or another. I never did get into Beanie Babies or Cabbage Patch kids, instead focusing on things I actually had an interest in and not collecting for speculation. My problem has always been that I cannot part with them once I own them. So my collection grows in value as the hobby expands, but then falls just as quickly as the world moves on to the next hot thing.

I remember the first time I saw a Funko Pop! at the mall. I don’t recall the actual subjects of the figures, but after seeing some of them were store exclusives and learning other stores had their own, I knew instantly I should NOT start a collection of them. I would never be satisfied not owning one of each and would drain the kids’ college funds chasing them down. I didn’t buy any that day, nor for a long time after that. 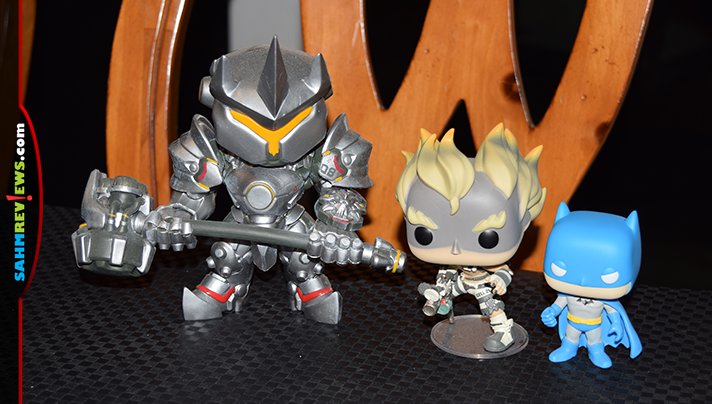 That all changed when Madison and I started playing Overwatch on the Xbox together. It didn’t take long for Funko to begin issuing different characters from the game in Pop! form. We had a discussion and again decided we wouldn’t chase them all down, but would purchase a few featuring the characters we played often in the game. Junkrat, Bastion, Reinhardt, Roadhog and Symmetra now sit in my office – not in collector condition! We ripped them out of the boxes and display them proudly! 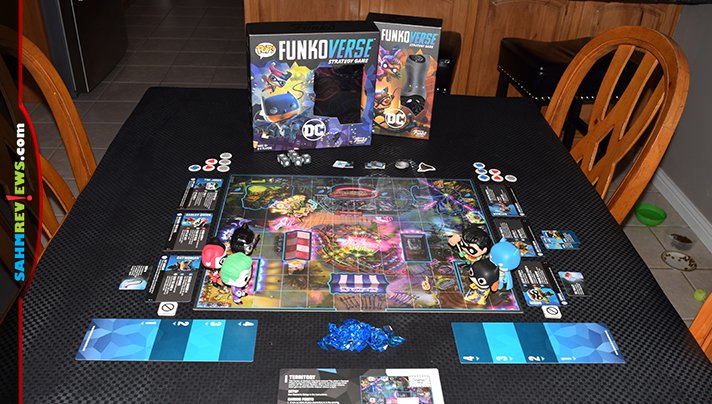 At this year’s Gen Con convention we were treated to a preview of the brand new Funkoverse strategy game. The thought of being able to use our current small collection of figures to play a game filled me with mixed emotions. Are my Pop!s meant for displaying or playing? Once I saw the actual game and discovered that the new vinyl figures used are a smaller scale, I knew my Overwatch characters were safe (for now) and Funko had created a completely new line that I would need to collect. 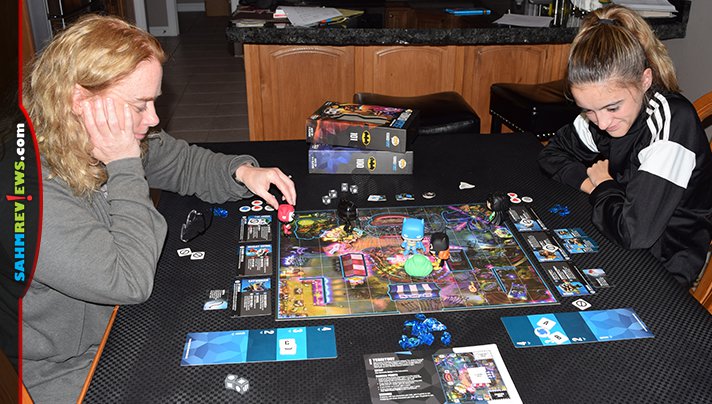 The Funkoverse line of games allows you to take on the roles of your favorite characters in a head-to-head battle where winning conditions are determined by custom scenarios. We chose to begin with the four-player DC version which includes The Joker, Harley Quinn, Batgirl and Batman. I mention “four-player”, but in reality Funkoverse is a two-player game with allowances for additional players to each control their own figure and work as allies.

After picking a scenario, the board is set out and point markers are placed on the setup squares as shown on the scenario card. Each side takes a cooldown track, start player is decided by flipping the first player marker and characters are chosen along with a basic (non-figure) character matching their base. Matching character cards, status cards and tokens are distributed to all players and the scenario card is checked for additional setup rules. 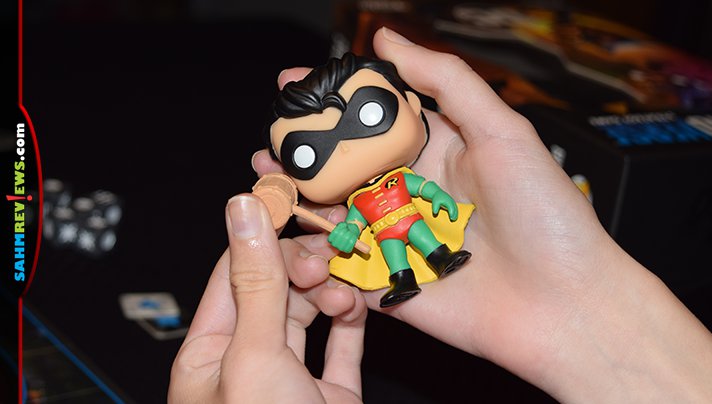 A game of Funkoverse is played over rounds, which end when all characters have taken one turn. On a turn a team may activate any of their characters and perform two actions. These include moving their figure on the board, assisting other characters that have been knocked down, interacting with things in the environment or challenging foes. Named characters also have special actions that vary from person to person and items may be acquired that also grant special abilities. 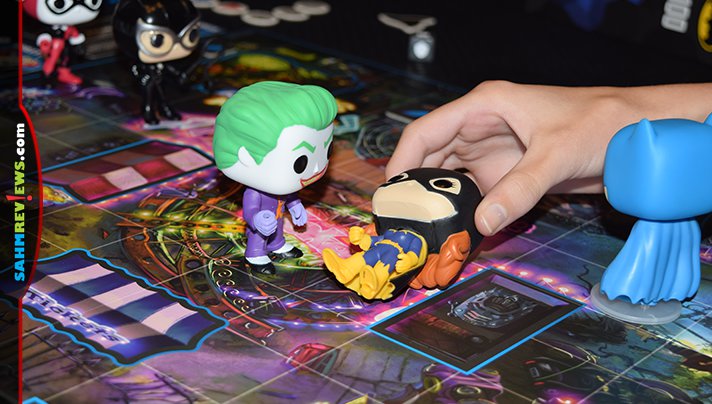 If your character has been knocked down (as the result of losing a challenge), you can use your turn to stand the character back up. If attacked again while laying down and you suffer a loss, that character is knocked out and lost for the rest of the round (put on your cooldown track). After a character has completed their two actions (or has been stood up), that figure is finished for the round and an Exhausted Marker is placed on their character card. The other player (team) then gets to activate one of their characters. 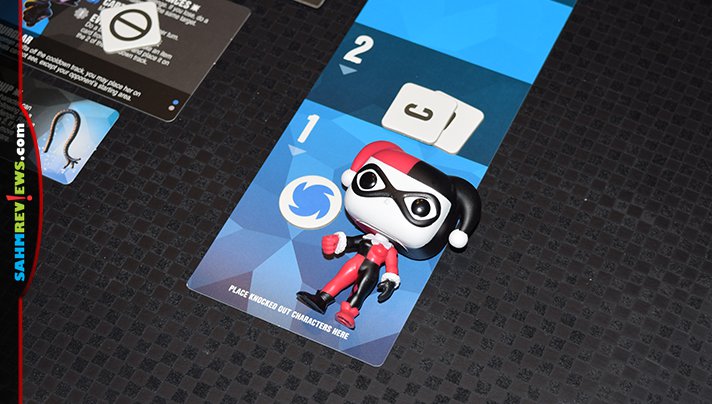 Once a round is complete, any items or characters on the teams’ cooldown track are shifted down one number. Things that shift off the “1” spot on the track are returned to play, with characters returning to the team’s starting area. Ability tokens return to the pool and items are given back to the appropriate character. At the end of each round, points earned are counted and checked against the scenario’s winning condition. If one team has fulfilled all of the requirements, they are declared the winner of Funkoverse. If there is a tie, play more rounds until one side has more points than the other! 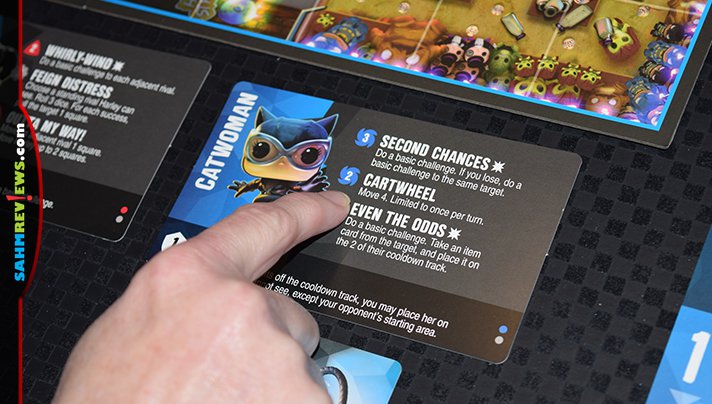 What makes Funkoverse extra interesting is the availability of expandalones in the form of additional characters from the same and different properties. For instance, there is a 2-character expansion for the DC Universe that features Catwoman and Robin. This allows you to choose who you want to have on your team and to replace the basic character with a named one with their own abilities (and technically allowing up to six players to play together!). 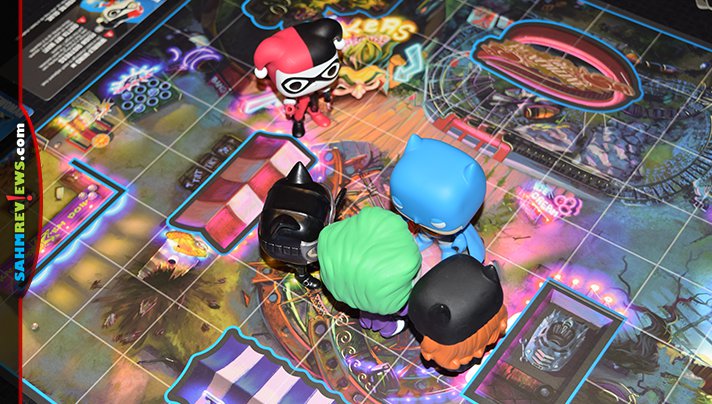 These expandalones are named as such because they’re also stand-alone 2-player games using the same rules and a paper map instead of a full board. You can really mix things up by purchasing versions that are of completely different IPs. For the October release there is a 2-character set of Golden Girls (Rose & Blanche) as well as the famous duo of Rick & Morty. Also on the market are 4-packs and 2-packs from the world of Harry Potter! Imagine using their dedicated maps and characters with other versions – you could play a game of Batman vs. Lord Voldemort! 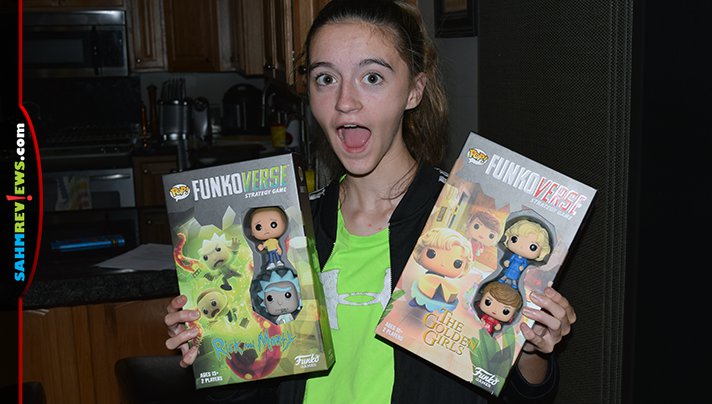 If you’re looking for a Christmas idea for someone you know likes DC, Harry Potter, The Golden Girls or Rick & Morty, consider picking up the Funkoverse strategy game at your favorite local game store, select GameStop locations or on Amazon. If you want to learn more about Funkoverse or drool over all the amazing full-sized Funko Pop! figures available, head over to Funko’s website! Be sure to follow them on social media (Facebook, Twitter) to find out what other characters they’ll be making available in the Funkoverse!

Do you have any Funko Pop! figures in your collection?