Last week I was headed to Davenport to attend a meeting. As I approached the downtown area, I was presented with detours for what seems like the millionth time this year. While it’s not uncommon to have lane closures for road work, these detours have all been the result of the Mighty Mississippi overflowing its banks. I am finally realizing that if I need to go anywhere near the Mississippi River, I need to plan for extra time to get to my destination. It used to be that this was only an issue a couple times a year but lately it’s been a constant. When we couple our personal experiences with the river and the fact that Madison is studying economics this year at the high school, seems only fitting we should play a game that ties those together. Broadhorns: Early Trade on the Mississippi from Rio Grande Games fit the bill perfectly. 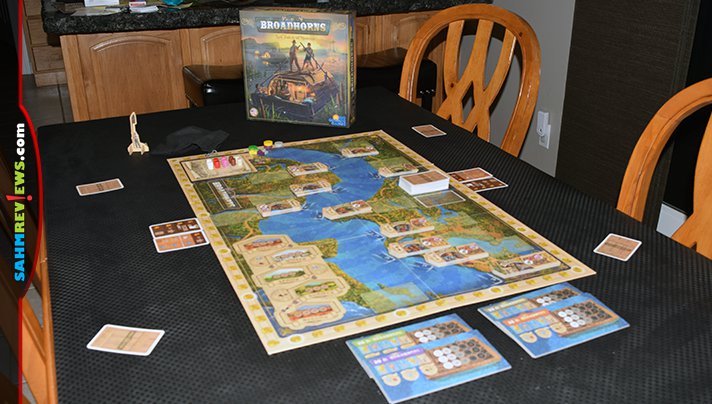 The concept of Broadhorns board game is that you’re transporting goods and people down the river from St. Louis to New Orleans, buying and selling along the way. Set up the game by placing the large board in the center of the table. The deck of Expedition cards is shuffled and placed alongside the board. Each player (up to four) selects a color and takes the corresponding Gold marker and Broadhorn piece along with one Expedition card. Two of each type of good are placed on the 3 and 2 spaces in the market and the remaining barrels are placed in the draw bag. Shuffle and draw three corresponding town tiles for each location and place them in a face up stack on their corresponding space. Determine a starting player then move each player on the gold track based on their order. Players will begin the game by performing one port action to select their desired Broadhord from the available options. There are ricketier boats that don’t cost much nor carry much or larger, fancier ships that carry more cargo and people along with a heavier price tag. 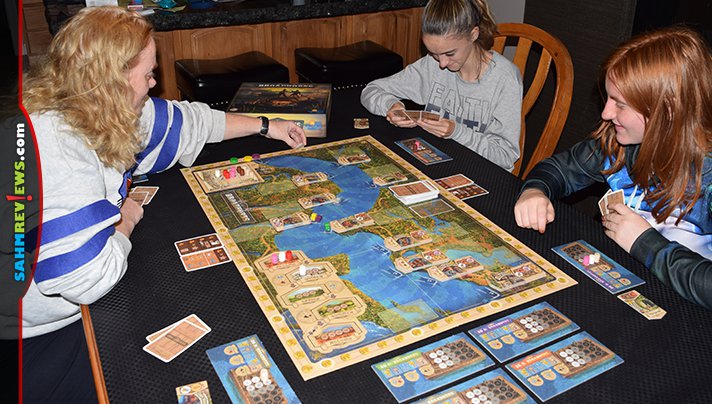 The game will take place over several rounds determined by when goods are sold to a city. I’ll explain it in more detail shortly, but suffice to say that no two games will be alike. Between the random draw of the town tiles, the randomness of the available goods and the rate at which people traverse down the Mississippi and sell goods, it provides enough to give the game replay value. 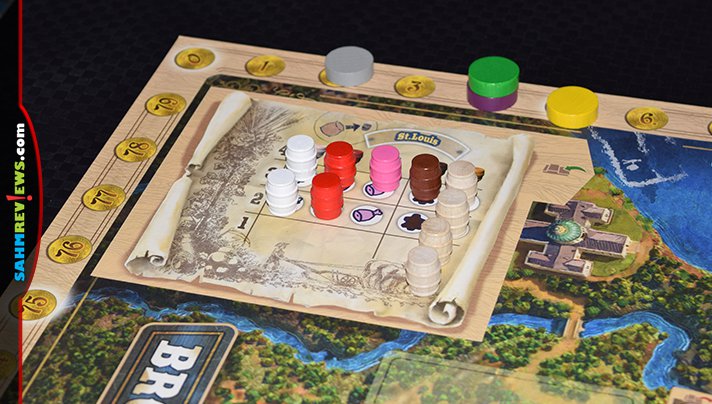 On your turn, you’ll proceed through four steps. You will refresh the market, spoil cargo, take two actions then draw an expedition card. Let’s start by talking about the market itself. The goods are limited and variable. At the beginning of your turn, you’ll randomly draw goods from the bag until there are ten total. Here’s where the idea of supply and demand starts to take hold. The first one drawn is placed on the 3 spot with all remaining work their way down. Excess goods of one type means you can pick them up cheaper. Not many available and you’ll find yourself paying a premium. 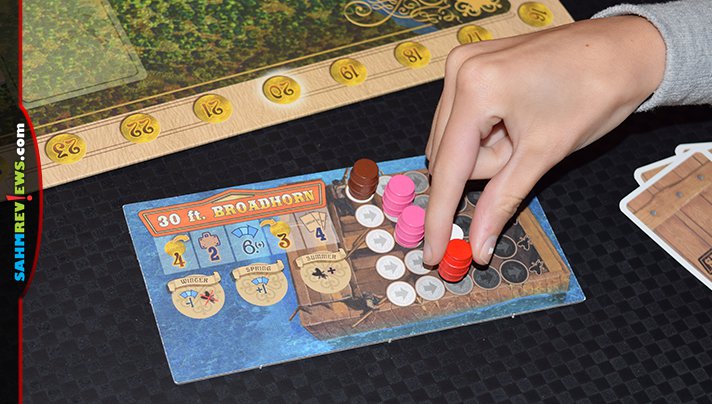 If your ship was already carrying cargo then the next step you’ll take is to spoil the appropriate goods on the cargo track of your Broadhorn. Furs and Whiskey don’t spoil, but flour, apples and pork do. If the perishable cargo reaches the last space then you’ll want to make sure you sell it. Otherwise, it’s lost and the barrel is returned to the bag. As in real life, that’s just a waste of money. 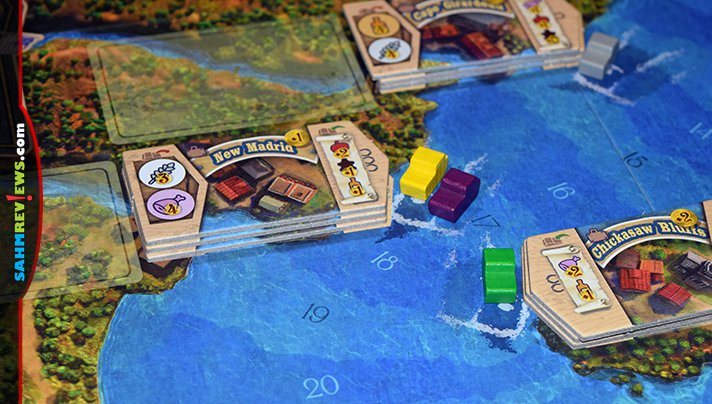 Next, you’ll perform two actions which can be done in any order. You can either take a port action first then move or move first then take a port action. You’re only allowed one port action per turn, but as an alternative you may opt to take the movement action twice. Movement is pretty simple and it’s dictated by your boat’s abilities as well as the limitations (or bonuses) of the related season. You’ll move down the river on the designated spaces and may opt to dock for the night at a port within the same space. 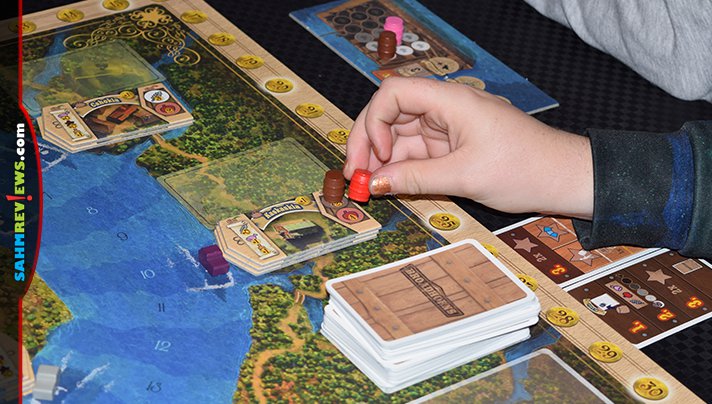 When you choose to take the port action, you can do a variety of things. First, you will sell any goods of interest to that particular city. You’ll know what they’re looking for by checking the details on the town tile. Once you’ve sold goods and collected your fee, you may opt to purchase additional goods to deliver to another port on a future turn. There’s also the option to pick up or drop off passengers. 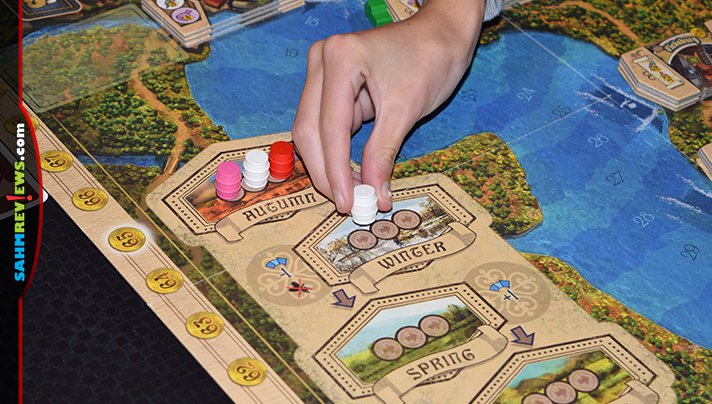 In the event that you sell and fulfill the town’s requirements, you’ll earn that card and the bonus as noted on it. When you take the tile, you’ll examine the delivery. If there is at least one perishable item, you will place it on the next available space in the current season. This is the round tracker and will vary based on which goods are sold and when. Any additional goods on the town tile are returned to the bag. What’s interesting is that only perishable cargo barrels are used in this fashion so as the seasons continue on, there becomes a scarcity of perishable goods. When a barrel has been placed in the final season, all goods from the prior four seasons are placed back into the bag. 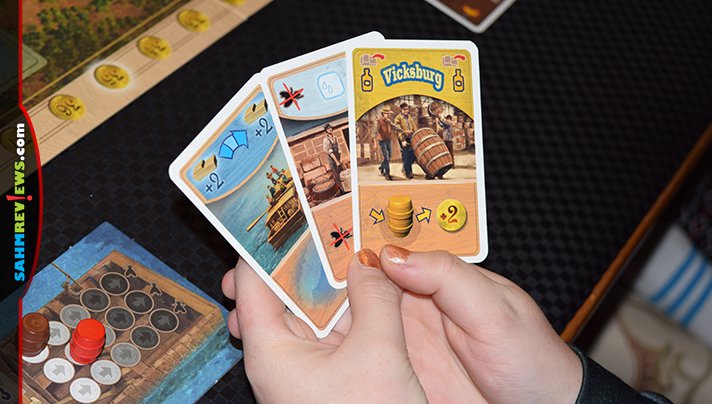 The final thing you’ll do on your turn is drawn an Expedition card. These may include cards the involve delivery travelers, cargo spoilage, peddlers or the river’s currents. There’s a hand limit (based on the the type of Broadhorn you own) so be mindful of when you can play them. If you are over your limit and must discard, you’ll place traveler and delivery cards in their related town discard pile while ice, peddler and current cards are placed in the general discard pile.

You’ll continue to sell and buy cargo while floating down the Mighty Mississippi. At any point, you may opt to sell your boat and return to St. Louis to begin a new expedition. When all the seasons have been filled with cargo, the game ends. Players examine their town tiles and count the number of wreaths on display. Additional gold is given as an end game bonus based on who had the highest number. The player with the most overall gold after that is declared the winner. What’s interesting is that all along, you are using that same gold to buy goods so you have to think about spending vs saving!

Broadhorns: Early Trade on the Mississippi is labeled for ages 14+, but it isn’t overwhelmingly difficult and could be played by kids several years younger if the rules are explained. It is actually an excellent game for teaching about trade on the Mississippi (hence the name), economic principles of supply and demand as well as the geography of the lower Mississippi River. Copies of Broadhorns are available on Amazon or at a local store if you’re looking to add one to your collection or to give as a gift. Visit their website to find out about the many other excellent offerings from Rio Grande Games. Paddle down their social streams (Facebook, Twitter) to see what else they’re delivering!

Have you ever been on the Mississippi River?

1 thought on “Broadhorns Board Game Overview”