There was a story in the news the other day about how treasure hunters have finally started recovering gold from a shipwreck off the coast of South Carolina. The catastrophic incident occurred in the 1840s when the Governor Dudley collided with its sister ship, the Steamship North Carolina. While the passengers of the SS North Carolina were safely transferred to the Dudley, the cargo (which included a lot of gold) sank to the ocean floor with the ship. This recent news reminded me of a game we had played recently: ShipShape from Calliope Games’ Titan Series! Unlike the North Carolina and Governor Dudley who carried people and mail, the purpose of ShipShape is to transport the most combined value of gold, cannons and contraband over the course of three voyages. 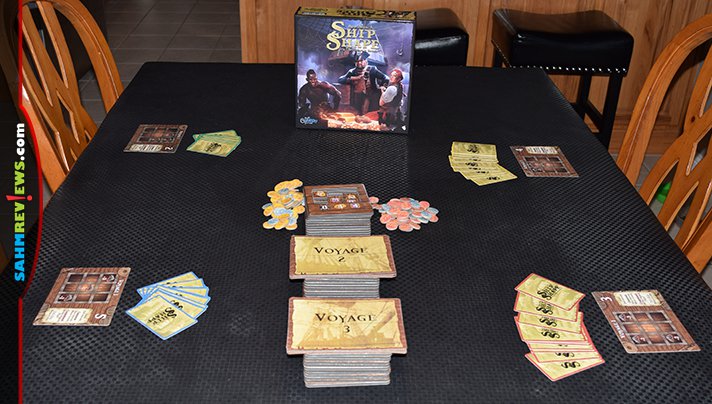 To set up the game, you determine how many people (up to 6, as with all Calliope Games titles!) are playing then randomly create a stack of crates that is equivalent to three times that number. Each of the three voyages will require a similar stack. We opted to prepare the stacks in advance and place them under their respective voyage cards. Give each player a set of crew cards along with one of the voyage 1 holds. Finally, place the bounty in a pile within reach of all players.

Here’s where things get interesting. Stand up in your space then peer down into the stack of crates. Some are visible and you may be able to see gold, cannons or contraband! Each layer of the stack includes exactly eight units so use your powers of deduction to determine which of the rows will be the best fit for your hold. 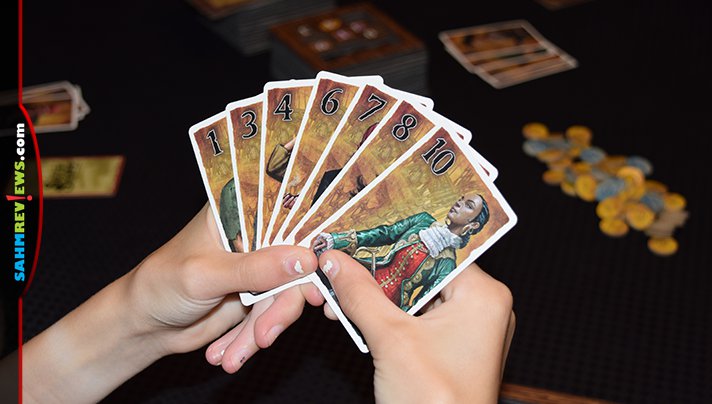 Players will compete simultaneously by bidding for the order in which the crates will be distributed. Secretly select a crew card and lay it face down in front of you. Once everyone has done so, all players reveal the card they chose. The person who presented the highest numbered card will take the top crate. Distribution continues through the stack until all players have claimed some cargo. All used cards are placed in an individual discard pile by your board. If at any point you only have one card in your hand, you may pick up the entire stack from your discard pile.

The exception is that if players tie. Those people are skipped at this time and the next non-tied number takes a crate. After all non-tied numbers are resolved, the people who tied will select a new crew card to determine who gets the next set of crates. This entire bidding process often means that you will end up with crates that don’t work with your current hold layout!

After three rounds of bidding (per voyage) you’ll score. All players collect bounty based on how many are visible from the top view of their hold. If rats are still visible, that amount is deducted from the anticipated gold. Next, you’ll count up the number of cannons. The player with the most will collect bounty equal to their number of cannons minus the number of the person with the least. Each additional player does the same with the lowest person collecting zero bounty. Finally, the contraband is tabulated. The player with the highest value has thrown up too many red flags for the authorities causing their contraband is seized by the Royal Navy. As a result, they get nothing for their efforts to smuggle it in. All other players collect bounty based on how much contraband was visible. 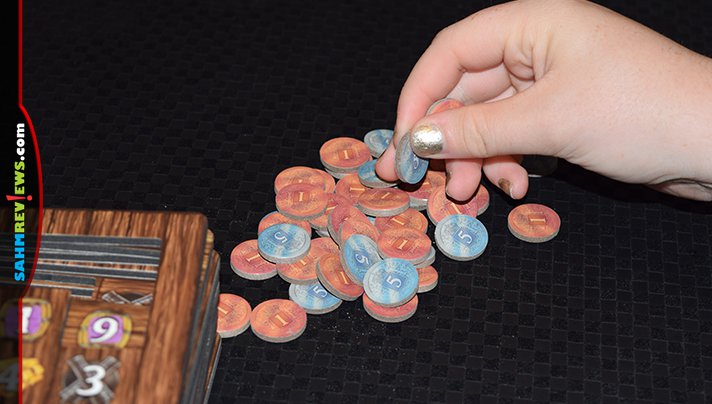 Finally, players receive an 8-coin bonus bounty if they’ve successfully filled their hold with gold, cannons and contraband. Rats still showing? No bonus for you!  You’ll repeat this process for two more voyages with card numbers being distributed based on who has the most coins at the end of the prior voyage. Don’t worry if you happen to fall behind in the first voyage. The cargo holds vary from round to round and are distributed to players based on who is in the lead! After three trips at sea, the player who has accumulated the most bounty wins!

The game requires a little bit of bluffing, but nothing near as intense as Sheriff of Nottingham which makes this easy for younger kids to learn and participate. ShipShape is available direct from Calliope Games for $30 or you can grab a copy of ShipShape from Amazon. Find out what other great games are in the hold of the Calliope Games’ ship by following them on Facebook and Twitter! If the idea of hitting the high seas inspires you, check out our tips for planning a cruise!

Have you ever been on a ship?

3 comments on «ShipShape Board Game Overview»