Probably because school is back in session, we get quite a few emails inquiring about which games are good for teaching. It’s a wide open ask, and without any background of what subject matter, ages and lessons they’re trying to supplement, it is difficult to provide succinct answers. We usually direct them to our article about Sneaky Teaching: Games for Education and hope they’ll find inspiration among the lists by subject.

Even though we penned that article almost three years ago, it is still one of our most often visited pages on the entire site. Someday we intend to update it or craft a completely new one, so we’re always on the lookout for well-constructed, affordable and entertaining games to include in a revised list. Today we’re focusing on one that fits all of the above criteria – Elementos by Tyto Games. 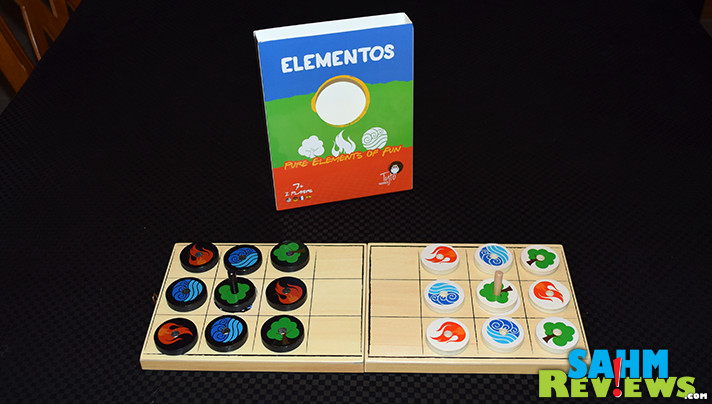 We last talked about Tyto Games in April when we featured their head-to-head tank battle game, Final Act. The premise was simple:  get one of your tanks into the enemy’s last line of defense area before they invade yours. Elementos is similar in nature in that you are trying to advance your wand across a 3×8 board and into your opponent’s last row.

The Elementos board is printed on the outside of a foldable wooden box that houses all of the playing pieces. Inside you’ll find nine colored discs for each player with a silkscreened logo of either a tree, water or fire on both sides. A matching colored peg acts as your wand and fits inside the pre-drilled holes in each disc. 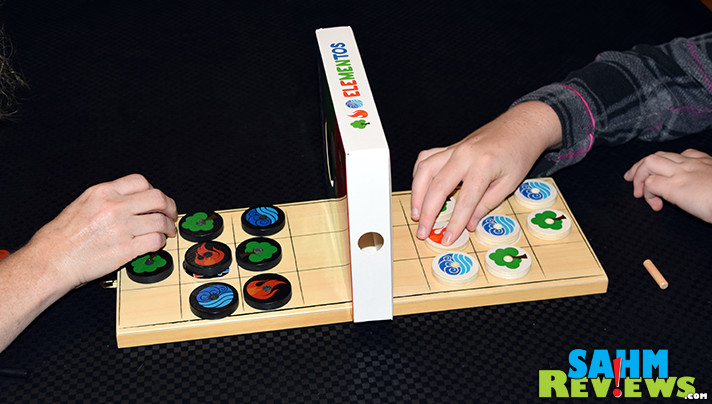 Both players take their pieces and lay them out in a 3×3 square on their side of the board. Either side of the disc may be used, and we recommend placing the box between the two sides to prevent the opponent from knowing what the other is doing. Your wand will go into the piece in the center of your square to begin the game. 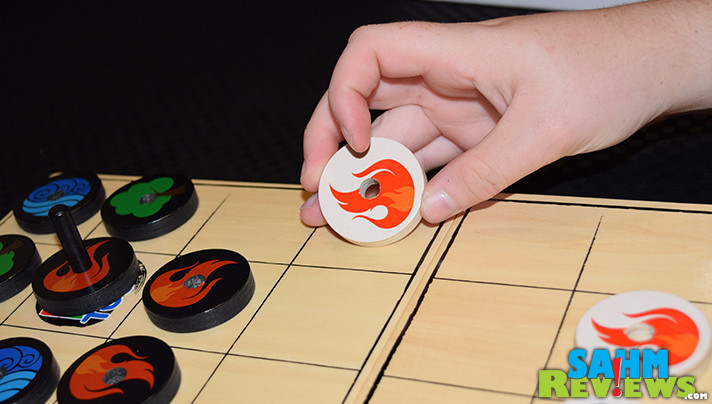 On your turn you will take one of three actions. You may move a game piece (w/o a wand) one space in any direction, including diagonally, except for backwards. Instead, you might choose to flip a game piece to the other side, thus changing its symbol. Your last option is to move the wand. This is done by either moving the wand from the piece it is on onto any of your game pieces in a neighboring square (except backwards, just like moving a disc) or to move the wand AND the disc in which it is in forward one space. 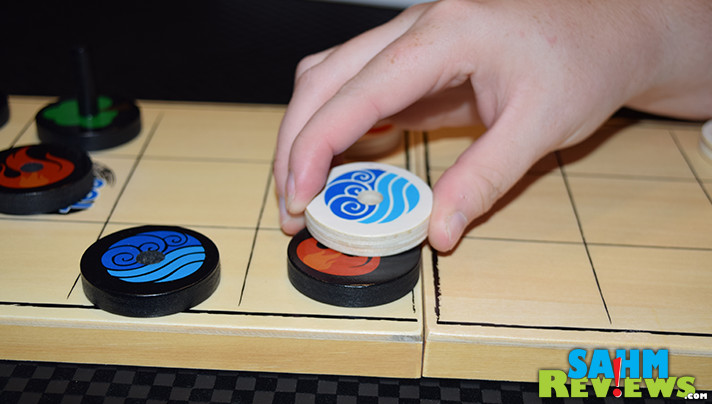 When you move onto a space with a disc or your wand, and it already contains one of your opponent’s pieces, a battle ensues. Just like rock, paper, scissors, in Elementos the symbols have a pecking order – fire takes wood, wood takes water and water takes fire. The captured piece is removed from the board. Note – you cannot attack the piece which holds your opponent’s wand – that is considered off limits. 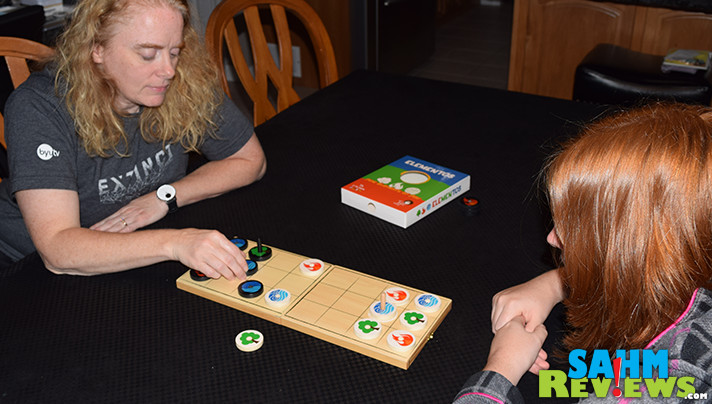 Participants take turns resolving one action each and then allowing the other person to go. Once a player advances their wand into the last row on the opposite end of the board, either by moving the wand with its piece or by jumping onto an empty piece, that person wins this round of Elementos! 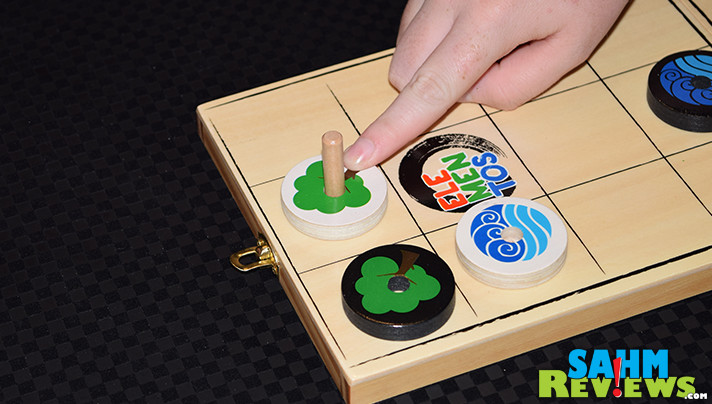 A good educational lesson of tactics, strategy and timing, with a bit of science mixed in (water dousing fire, etc.), Elementos can be found on Amazon for under $20 or direct from Tyto Games on their website. Now that you’ve seen the first two games by Tyto, make sure you are following them on Facebook and Twitter to see what’s coming up next! It looks like they’re going to fulfill their latest Kickstarter campaign by the end of this year!

Can you think of any other games that feature natural elements?