I clearly remember the first time I heard the term, “Bull in a China Shop”. I was only about four years old and we were shopping in a department store around Christmas time. While walking down an aisle, someone bumped a glass vase off the bottom shelf and it hit the floor, shattering into a million pieces. I don’t think I was the one to dislodge it, but for some reason everyone looked in my direction. It was then I heard another customer say to my parents, “you have a little bull in a china shop on your hands!”.

What made it worse was that right after it happened, Santa Claus walked by. It was the store Santa returning to his chair from break. Of course I didn’t realize it at the time and was heartbroken seeing his disappointed look at the mess on the floor. I just knew I was getting coal in my stocking that year. And remember, I don’t think I was the one to break it!

That memory had escaped me until we found a copy of Bull in a China Shop by Playroom Entertainment at our local Goodwill. I wasn’t sure if I would be required to break glass vases in this card game from 2007, but I knew everyone would blame me if one was! At 88 cents, it was still less than the one my parents made me pay for back in 1973. $3.99 to a 4yr old is a LOT of money…

In this game of Bull in a China Shop, up to five players participate as collectors trying to purchase different colored vases of varying values. All players receive one money card, one pass card and two starting cards along with a score sheet. The two starting cards are the beginning of your collection and may influence your scoring and collection at a later time.

A deck of china cards is shuffled and four score cards are placed after every ten cards. Five of the china cards are dealt into a row next to the deck. The bull cards are also shuffled, with five of them also dealt out to begin the game. On a player’s turn you have one of three choices – buy a china card, take a bull card or pass. 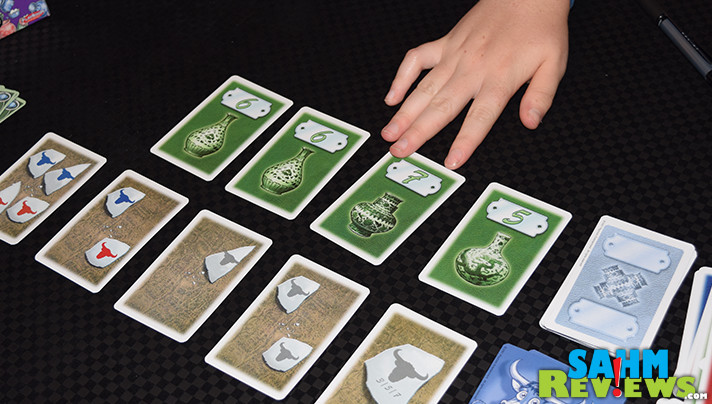 To buy a china card you simply select one of the face-up cards in the row and pay with your money card. It doesn’t matter the price of the item – you will use one money card to purchase one item, regardless of the value. Take that china card and add it to your face-up collection in front of you. 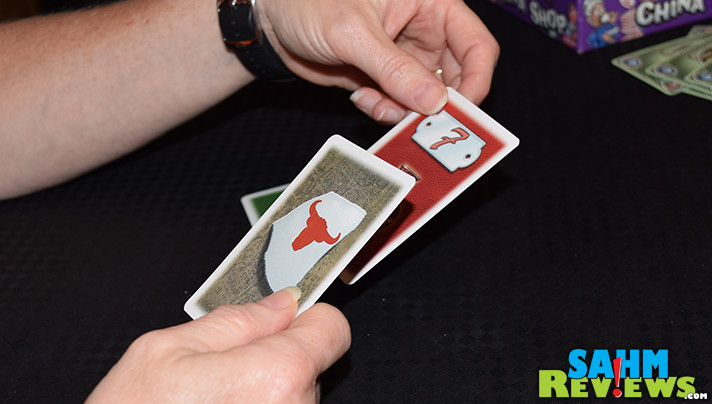 If you cannot (or do not want to) purchase a piece of china, you may take a bull card. By doing so you will also receive a money card for future purchases. There is a limit of two money cards per person, so you must eventually start shopping! On the bull card are one or a number of symbols that must be resolved immediately. For every small bull, you must discard a piece of china that matches its color. If there is a large bull, you must discard all china of that color in your possession! A small grey bull forces you to lose one piece of china of any color in your possession (your choice), while a large grey bull with numbers underneath it will destroy all china with those values! But this is the only way to gain additional money, so all players must confront the bull at some point. Of course, if you don’t have any china of the listed colors or numbers, you lose nothing! 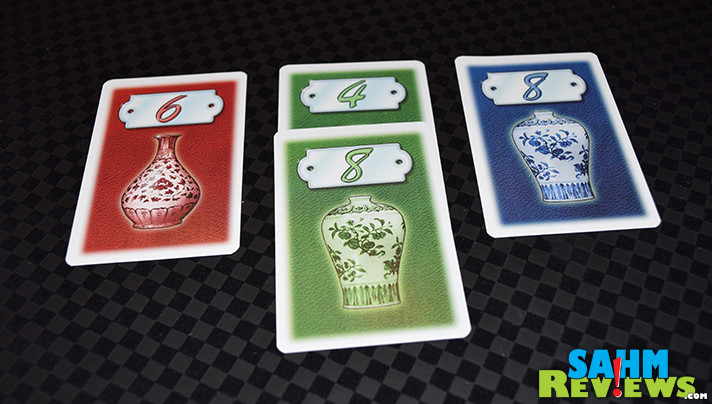 Once per game you may play your pass card to skip your turn. This is especially useful if there is a bull card present that you do not wish to collect. The row of five cards for both the bulls and the china refill only when depleted, so your choices may be limited to only one card of a type! 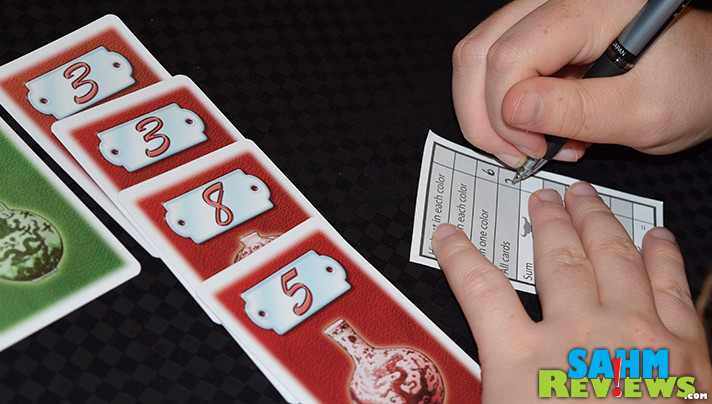 When the score card is at the top of the pile when the row runs out, play will stop and score will be taken. This happens four times during the game and each time you will only score one item (also your choice). Write down your points for the totals of your highest cards of each color, the lowest values of each color, all values of one color or the total of all china in your collection. Each category will be scored during the game, so once you claim a score for one of them, you will not score that again! The player with the highest overall score after the china pile is completely used is the winner of Bull in a China Shop!

Not a very common game as Amazon is currently sold out and we couldn’t locate any for sale on eBay either. Keep an eye out at your local thrift store for a copy as it is easily worth a couple bucks if you happen across a complete copy. Just don’t go down the glassware aisle with it!

Have you ever broken something in a store?