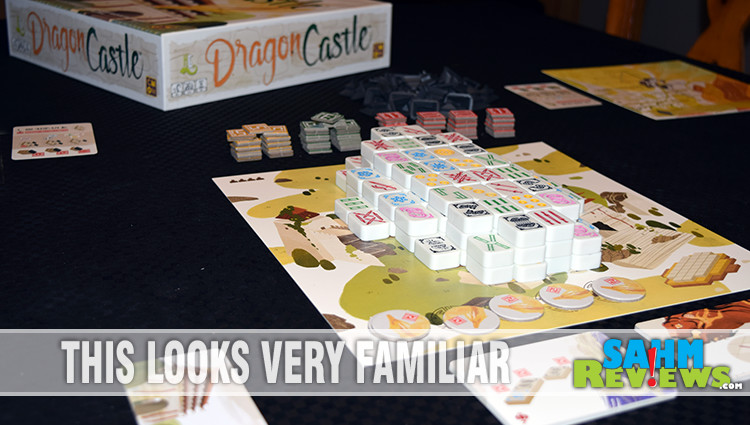 When I think back to the very first games I ever played on a computer, I have to think well before Windows and Minesweeper. Lunar Lander on my 8th grade teacher’s TRS-80 was a favorite we got to play if we got our assignments done early. I also remember playing some type of word game on the huge IBM machine at my aunt’s workplace. It wasn’t until the early 80’s when our family saved up to purchase an Apple II+ that I got to play my first official computer game. Although we were early console adopters (Atari VCS, Intellivision, etc.), nothing compared to the complexity you could experience with a well-written computer title.

Zork, Wizardry, Oregon Trail, Tetris and more. They were all available to us on 5¼” floppies at our local computer store or via mail order. But I think the one that got the most play was Mahjong. Tired of regular solitaire, this Chinese game from the Qing dynasty was one of the first classic games to be translated into computer form. We had never seen nor played it in real life, so this was our first introduction to the game. And ever since then I’ve been fascinated with it, picking up a set or two at thrift when they appear. While I’ve never played the version where you bet real money while playing, I still find myself escaping for a game or two online every once in a while.

Being such a big fan of Mahjong is probably the reason a new game from CMON, Dragon Castle, caught my eye in the demo area of the Origins Game Fair. I instantly recognized the uniquely-styles acrylic tiles stacked in a familiar manner. But upon further examination I realized I wasn’t looking at a new version of Mahjong – I had stumbled upon a brand new game that was simply using Mahjong-like tiles. 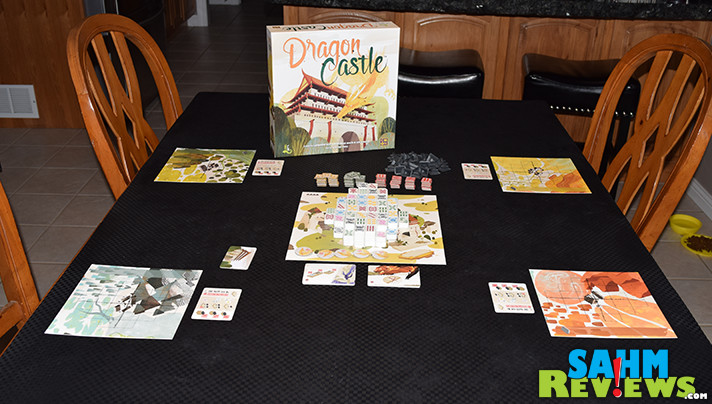 The premise of Dragon Castle is you and your friends are living in an area of a former powerful dragon whose castle is falling into ruins. Because it is no longer in favor of the Elder Dragon, the people are abandoning the city in search of a new home. As lords of nearby realms, you all are eager to welcome them, but realize you must convince them to stay by proving your own might and power. To do so you must gain the trust of the Spirits while using the crumblings of the former castle to build a new Dragon Castle of your own!

Setting up for a game of Dragon Castle is much the same as a game of Mahjong. Tiles are randomly stacked in the center of the play area according to a designated pattern. The rulebook contains a number of suggested starting configurations and you are encouraged to design your own as well. Once established, players take turns taking one action from a list of a possible four. 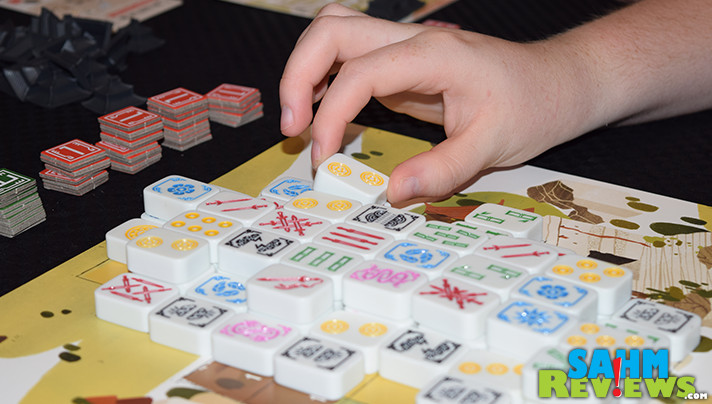 The first three options require you to choose one available tile from the top-most floor of the castle utilizing typical Mahjong rules (must not be blocked by another tile). Then you may either take a matching available tile from any level and place it on your personal board to construct a new castle, take a shrine and put only the one tile in your castle or discard the tile face-down and receive a 1VP token from the general pool. 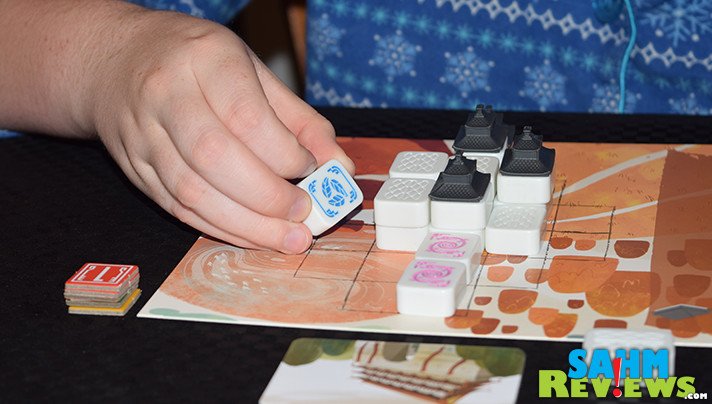 Where you place your gathered tiles on your personal board is where the real strategy lies. All collected tiles are placed face-up anywhere on your board, as long as they are placed on an empty space or a tile that has been turned face-down. They can never be placed in an area with a face-up tile or a stack of tiles that have a shrine on top of them. 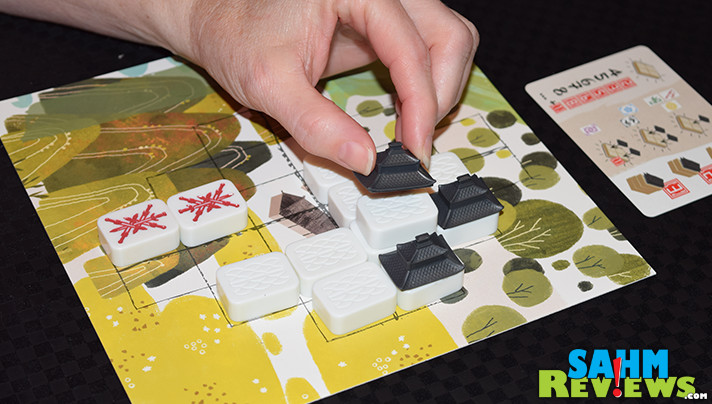 Whenever you connect four of a matching type of tile (there are six types in total), you must ‘consolidate’ them by turning them over in place and scoring points. The number of points will vary based upon the total number that you connected (2 points for four tiles, three points for five tiles, 5 points for six tiles, etc.). Additionally, if you have any shrines in your pool, you may place one of them on top of one of the newly-turned-over tiles and score points at the end of the game depending upon how high the stack is. If the set is made up of Special tiles (Seasons, Winds, Dragons), you may place up to two shrines when consolidating!

Turns continue in clockwise order until there are only tiles in the original Dragon Castle on the lowest level. At that point the fourth possible turn action is allowed, and that has you Summoning the Dragon by taking a token from the countdown track. Each of these are worth 2VP’s at the end of the game and signify the upcoming end of the game. When the exclamation mark underneath these tokens is revealed, the game continues until the player to the right of the starting player completes their next turn. At that point the game ends immediately. 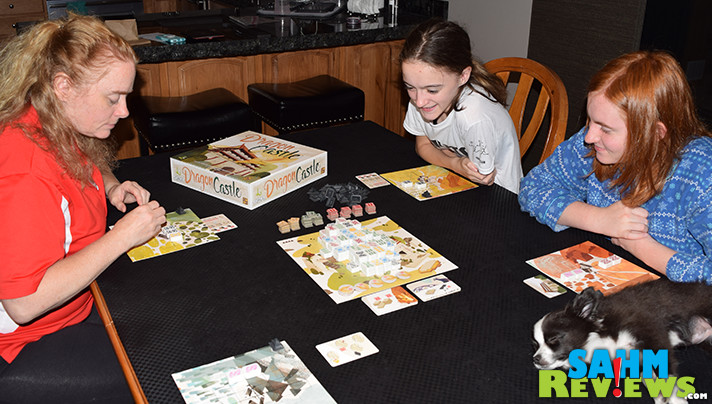 Each player adds up the points they have earned during the game (in VP tokens), points for Shrines and any Countdown tokens they collected, and the ruler with the highest total wins Dragon Castle! Once the basic game is mastered, adding in optional Spirit and Dragon cards (one each per game) will give every player additional actions to take on their turn or end-game goals to complete and earn extra points. Because there are a number of each of these cards, no two games will be alike!

You will find this easy-to-learn and visually-appealing game on Amazon for under the $50 MSRP – a bargain if you’ve priced out Mahjong tiles any time recently. Dragon Castle is a brand new title that just hit retail last month, but any respectable game store should already have their copies in stock for immediate purchase!

This wasn’t the only exciting game we previewed at Origins from CMON! Next month we’ll tell you all about Gizmos as it gets closer to its August release date. You can read about it on CMON’s website and grab details from their Facebook and Twitter pages, but let me assure you it is one you will definitely want in your collection. It may be one of the best engine-building games we’ve played in a long time! And it has marbles!

Have you ever played Mahjong?