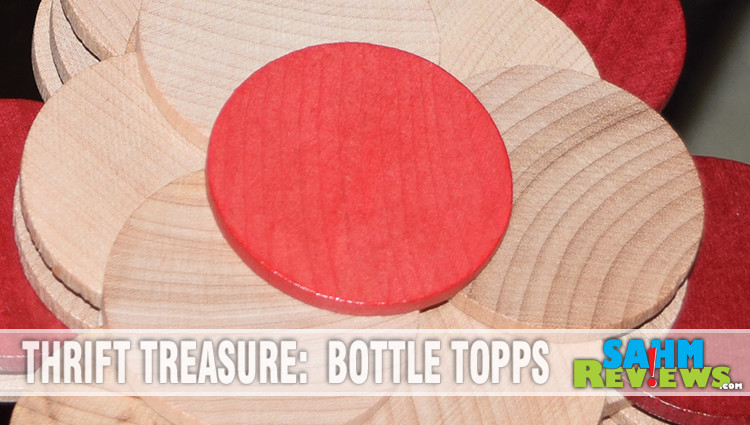 There are times I look at a game and think, “How did the designer come up with this?!”. Some of today’s games are so crazy and different that only a madman could have conceived them. But that’s not the case with this week’s Thrift Treasure! Just looking at the photos on the box and I can imagine someone sitting in a bar, stacking bottle caps on top of empty beer bottles to come up with the concept behind Bottle Topps. 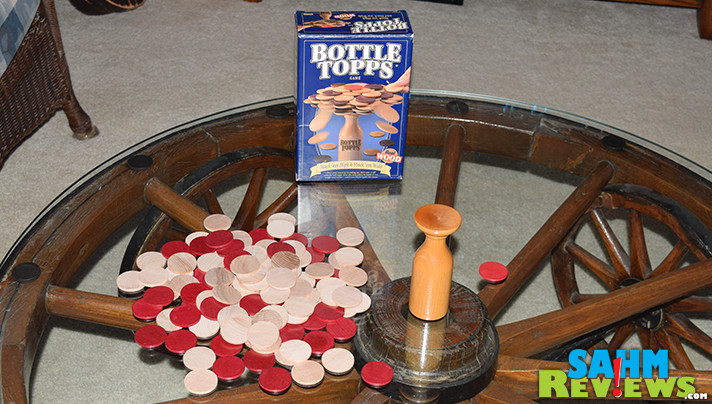 At first I thought the game was just one about stacking chips as high as possible on the top of a wooden bottle. In actuality there is a little more to the game. And by “a little more” I mean there is a ton of setup that needs to be done before the game can be played. In fact, the setup process is part of the game itself! 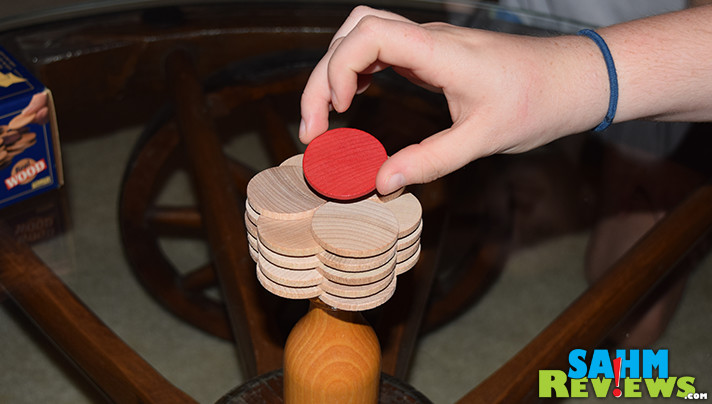 Designed for 2 or more players, this Parker Brothers game was originally issued by Alsip & Company in 1992 before being distributed nationally in 1993. At the beginning of the game all players work together to build the central base of the stack by placing wooden discs in 3-disc levels on top of the bottle. Once all players agree the stack is high enough (usually around nine levels), a red stopper disc is placed on top. 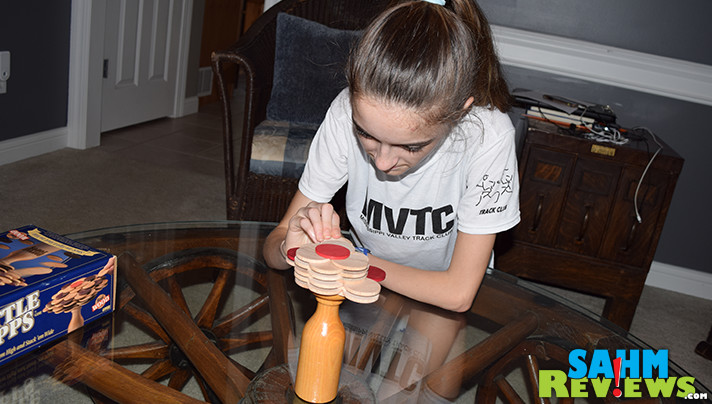 Players then take turns in order by putting one additional disc into one of the slots between layers, building the stack outwards instead of upwards. The weight of the discs above should hold them in place, and with nine levels there are plenty of spaces to begin the outward progression. Use any color disc and slip it into one of the open spaces. 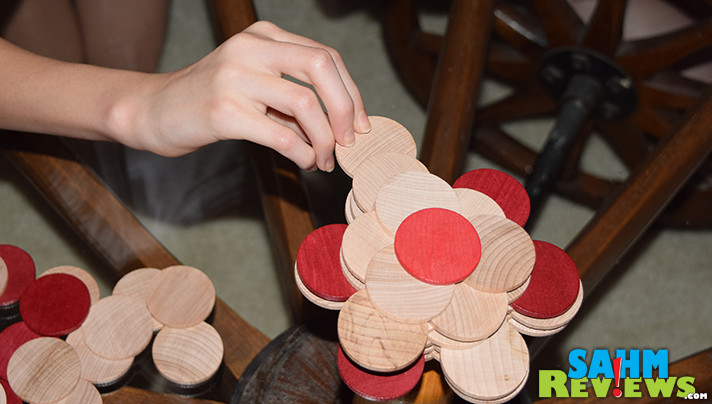 If you make discs fall (up to five), then you must place DOUBLE the number back into the stack before your turn ends. If others continue to fall while replacing them, the penalty is cumulative. If any player causes six or more to fall at the same time, then they are out of the game and play continues with the remaining participants. If you are unlucky enough to cause the whole stack to crash, the game ends immediately with the other players winning (you lose)! 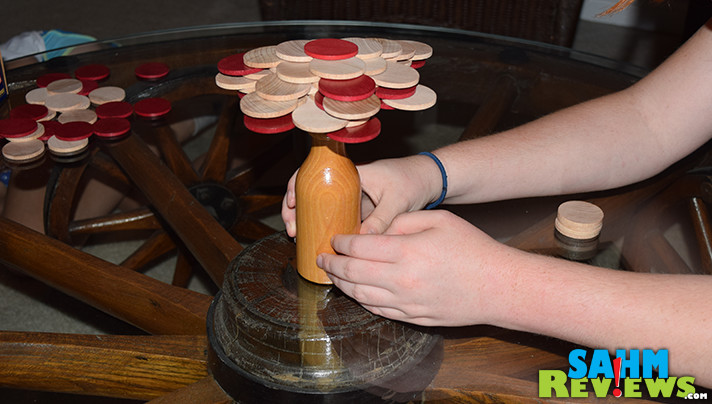 When adding to the stack you are allowed to tighten the other topps with your topp or your finger, but you may not loosen the stack or remove any discs placed previously. You also must remain in your place on your turn! If you want to place a disc on the other side of the Bottle Topps stack, you much reach around or turn the whole bottle! If you bump the table or otherwise cause discs to fall and it isn’t your turn, you must immediately put back double the number you made fall! 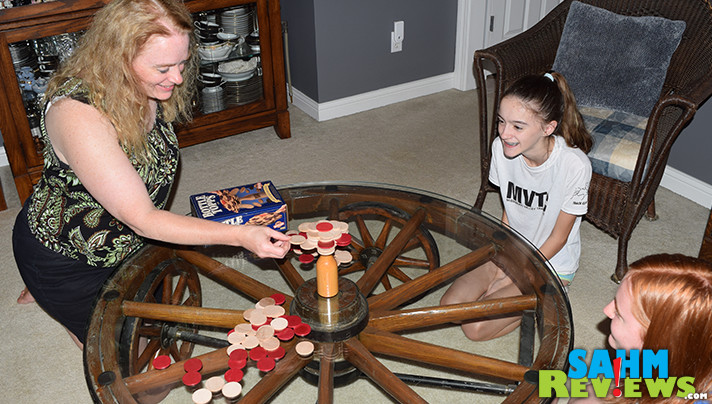 The last person left who hasn’t caused six to fall at one time will be the overall winner of Bottle Topps. It is possible to create a stack that uses all of the included discs, so when this happens, all remaining players share in the win. If you find yourself able to do this often, try the game with fewer starting levels. This will require you to build out further! 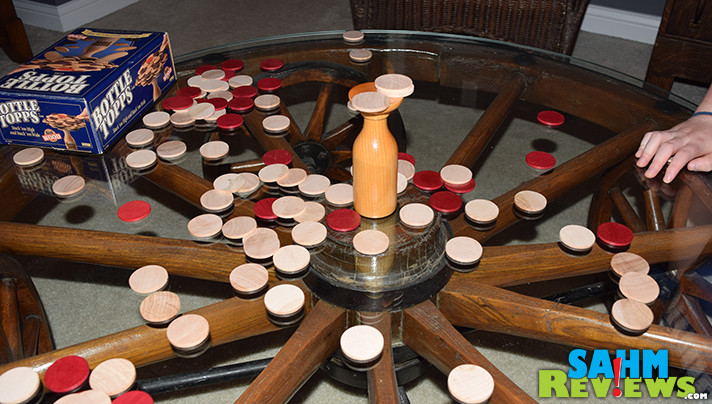 You will find copies of Bottle Topps on Amazon, but currently at a very inflated price. Your best bet is to grab one from eBay where they are regularly available for under $10. Alternatively, because it was originally offered at most big-box stores in the early 90’s, you shouldn’t have much trouble finding one at thrift or a local yard sale!