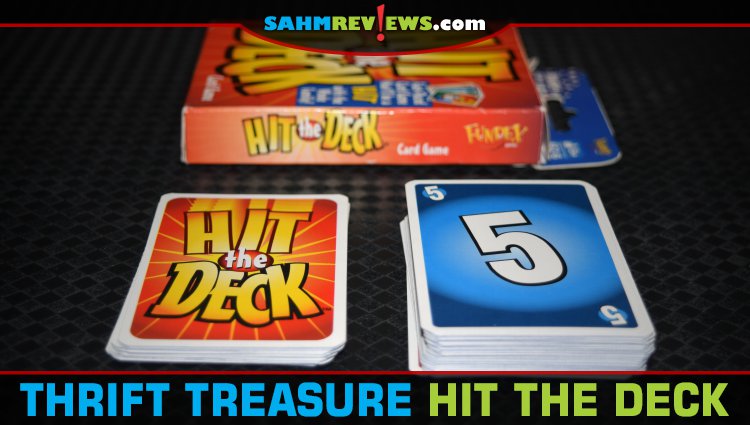 I usually love looking at the basket of card games at our local Goodwill. They’re typically priced at 88 cents each and are regularly ones we don’t have in our collection. I thought I was lucky to find two new-to-me titles this week. As we normally do, we started checking the first one to make sure all the cards were present (they were). The second game we didn’t bother inventorying since the cards were still in their shrink-wrap. Lesson learned that day.

What I later discovered was that while the cards were still in their original factory wrapping, there was supposed to be TWO decks in the box, not just one. This meant I had spent money on a game that was completely unplayable. You’ll have to forgive me for my oversight – this is the first time something like this has happened. I had always assumed that a wrapped, unplayed game meant nothing was missing. I’ll know better for next time.

I still had the other game we did check, so it inadvertently became this week’s Thrift Treasure feature. Hit the Deck is a card game by Fundex that was issued in 2002. Once you hear how it is played, you’ll realize why we think it is just another variation of UNO.

The deck is comprised of 110 cards (yes, I double-checked) and is made up of four colored sets (four each of numbers 1-5) and several specialty cards. After shuffling the deck, seven cards are dealt out to each player. The rest of the cards are placed in the middle of the play area as a draw deck. One is turned over to form a discard pile. Hit the Deck supports two to six players who are each trying to have the lowest score when someone else scores one hundred points or more.

On a turn a player is trying to play one card to the discard pile by matching either the color or the number. If unable, they will draw one card from the deck and play it if possible. Otherwise, it is put in their hand and play passes to the next person.

Special Hit the Deck cards dictate which number or color must be played next. If a Hit the Deck with a Hand card is revealed, the active player reads it out and everyone rushes to place their hand on the discard pile. The last person to do so must draw four cards into their hand immediately (see the similarity to UNO’s Draw 4?). If you slap the deck when a different card is there, you’ll draw two into your hand as a penalty.

Once a player places their last card, the round is over immediately. The person who “went out” receives zero points. All other players total up the cards in their possession using their face values and ten points for each word card. Additional rounds are played in the exact same manner until one player amasses more than one hundred points. The person with the lowest total at that point wins Hit the Deck.

The similarities to the classic card game are unmistakable. But the unique mechanics of flipping over the decks makes it interesting enough to pick up at thrift if you come across a cheap copy. Make sure ALL of the cards are present before you check out. Hit the Deck isn’t currently in print, but you can find quite a few examples on eBay for a wide range of prices!

Do you always do a full inventory of a game before buying it at thrift?