You know what they say about “great minds think alike”, right? It’s magical when you’re on a wavelength with someone and you want to do the same things whether it be to watch the same TV shows, eat at the same restaurants or play the same games. Sometimes it’s simply a matter of feeling comfortable in an unfamiliar place because you know you mesh with someone else there.

Those thoughts and ideas are the backbone (or should I say honeycomb) of Hive Mind party game from Calliope Games. Designed by the mind behind Magic: The Gathering, it’s one of the games created through the Titan Kickstarter project. Unlike many party games, this one has a board and a visible end. Should I sweeten the pot by telling you that it accommodates as many players as you want without compromising game play or duration? It can and it does. The idea is that the hive is suffering from overcrowding and the queen has decided that it will run more efficiently with like-minded workers. So she starts putting them to the test and those who aren’t thinking as much like the others will be on their way out the door. 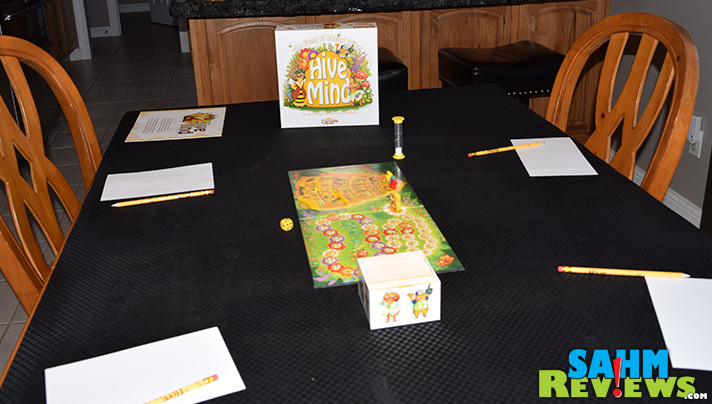 While the box comes with enough Beeples (those are bee-shaped playing pieces) for 12 people, you can use random other pieces so even more people can play. Setup is simple – as is usually the case with party games. Place the board in the center of the table alongside the question cards, die and timer. Give each player a pencil and piece of paper while they select a playing piece and add it to the board. The Queen Bee token is placed on the starting track and you’re ready to buzz.

The last person to eat honey gets to go first and rolls the die. The Queen is moved along the track and will determine how many bees she’s going to shoo toward the door. More on that in a minute. Next, you’ll take a question card. Note that they’re double sided but you’ll only use one side on a turn while the other side will be used in a future game. Select a question from the card – or make up your own – and ask it out loud. Flip the timer and everyone (including the person asking the question) writes down their answers. When the timer runs out, everyone takes turns comparing answers. Read your answer(s) and each bee (including yourself) that answers the same way raises their hand. You’ll get a point for each raised hand. If you don’t match anyone else, you’ll only get one point for that answer. If the question included multiple answers (such as “Name 3 chocolates that contain nuts.”) you’ll earn points for matches on EACH answer. Once everyone has compared answers and tallied their scores, you find the bees who matched the least.

This is where the Queen Bee comes into play. If she’s on a place with one bee, then the lowest scoring bee moves their Beeple one level toward the door. If two people tie for last then both move. If she’s sitting on a space with 2 or 3, then the 2nd and 3rd lowest scores would also advance one floor toward the door. So in some turns, multiple players may find themselves on the way out. 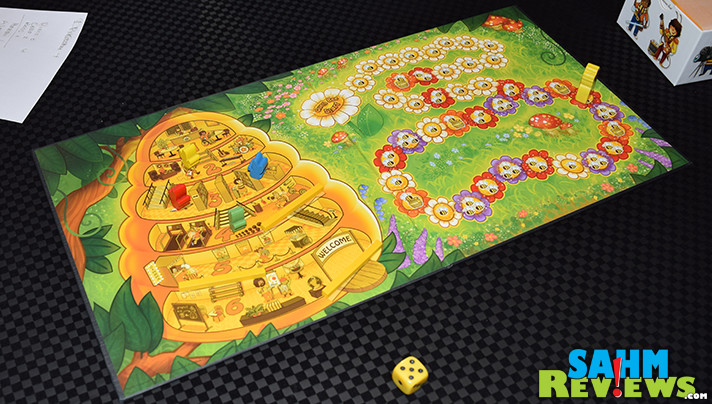 If the Queen Bee is on a place with one bee and a honey pot then in addition to the lowest score moving toward the door, the highest score moves one AWAY from the door! Play continues with the active player rotating around the table. The game continues until at least one bee exits the hive. Anyone still remaining in the hive at that point is considered a winner. 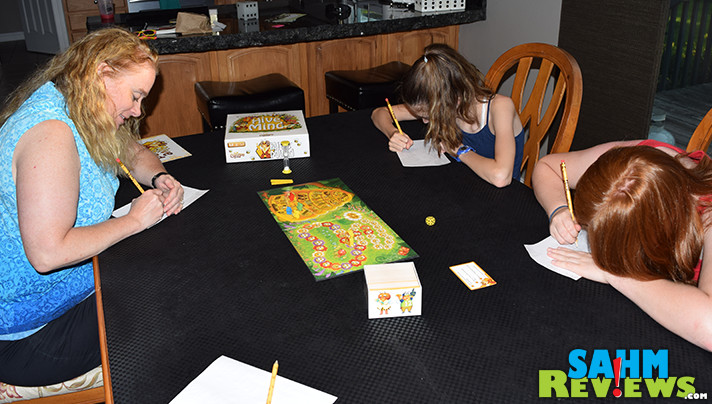 There are a number of party games such as That’s a Question!, Choice Words and Truth Bombs (to name a few) that incorporate answer matching, but I’m not aware of any that allow unlimited players. The board allows players to easily see who is in jeopardy of getting stung and how much longer until the game ends. It’s easy to play and the game isn’t messed up if someone has to leave midway through.

Whether you have a game group of three or a large gathering, Hive Mind will work. It’s available from Calliope Games’ website or on Amazon for around $23. We recently met with the Calliope Games team at Origins Game Fair and are looking forward to sharing details on some excellent new games they have coming out. Stay tuned for details! While you wait, be sure to enter to win a copy of Hive Mind using the entry form below: