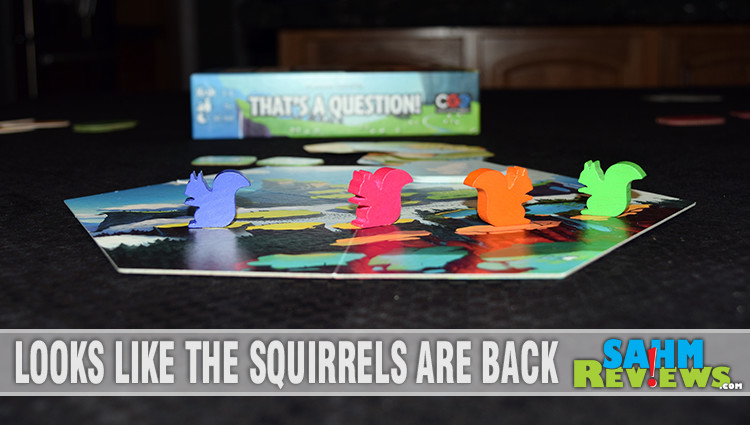 Over the years we have come to enjoy increasingly difficult strategy games as a family. Like most, we started out with the classics like Risk and Stratego. A few years ago we started introducing current hobby games to our girls. It wasn’t uncommon to see them enjoying (and winning) a round of Castles of Mad King Ludwig or Ticket to Ride. Our youngest even took second place at a local convention in a contest of strategy games whose entrants were mostly adults.

But they’re still kids at heart and love a round of One Night Ultimate Werewolf or Pluckin’ Pairs as much as then do beating us at “the harder games”. These types of party games are fun to have on hand because they usually support more than the normal number of players (four) and are quick to learn and teach. But in today’s market it is hard finding a decent party game that isn’t designed for adults as shown by the shelves full of mature titles at Target and Barnes & Noble.

In the latter part of last year, Czech Games Edition released their brand new That’s a Question party game at the annual Gen Con convention in Indianapolis. What caught our eye was the name of the designer at the top of the box – Vlaada Chvatil. To many of you this name probably means nothing. But since we’re huge fans of games in general, we’ve become used to looking for games by creators whose other titles we’ve enjoyed. Much like looking for a book by a favorite author. Once you know you like one title, there’s a very good chance that you’ll also enjoy the next. 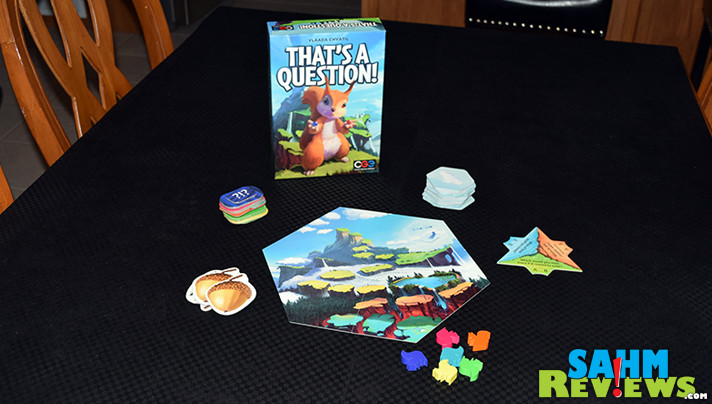 Vlaada Chvatil is known for a number of popular hobby games, most notably Mage Knight, Galaxy Trucker and Dungeon Petz. He is also the genius behind the very popular Pictomania, an addictive game about drawing and guessing. His latest game effort also fits into the family and party game categories and takes the question of “Would you rather…” a step farther with answers that may or may not have any relation.

Players take on the role of a squirrel climbing a mountain. As they are climbing, they are bored and asking each other questions. There obviously isn’t much else to do on this mountain. And being a squirrel doesn’t have any effect on your game play, they just chose squirrels. That’s a question I didn’t ask. 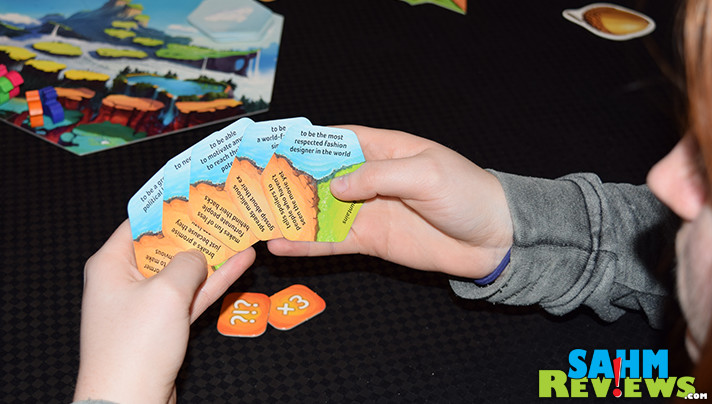 The mountainous game board is placed in the center of the play area and five hexagonal answer cards are dealt to each player. Depending upon the number of players (up to six), additional cards are set into a draw pile with the balance being returned to the box and not used. A starting player is determined and the Question board is put in front of them. The rest of the squirrels are given an acorn/hazelnut token. Each player also receives tokens in their color – an “A” token, a “B” token, an “x3” token and a “?!?” token.

The Question board is divided into three colored sections, each with a unique question. “Which of these would you choose?”, “Which would you miss more if it ceased to exist?” and “Whom do you consider worse?”. Each answer card has the same three colors with answers that fit the provided questions. The active player chooses a question to ask of another squirrel and places two of their cards with the corresponding answers alongside the Question board.

You may ask the question of any other player as long as they are in possession of an acorn/hazelnut (this is to prevent one person from being the target of all the questions). The asked player passes their acorn to you, then chooses their answer (A or B) honestly while everyone else other than the asker tries to guess how they will respond by also selecting their A or B token. All are played face-down and revealed once everyone has submitted a response. 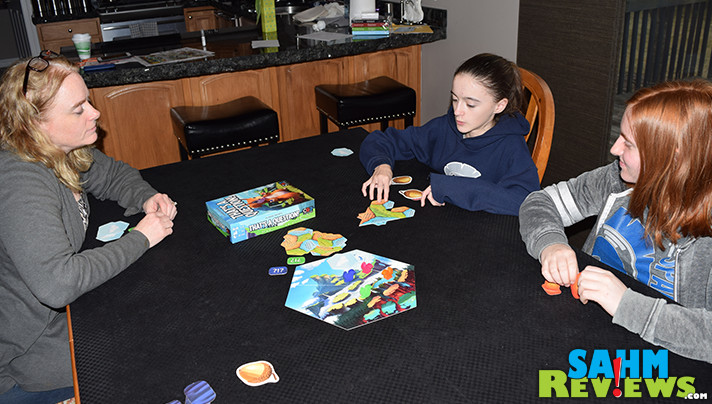 The person who originally answers is correct (obviously), so they receive a point and move their squirrel up the mountain one space. Everyone else who correctly guessed the answer also moves up one step. The person who asked the question (the active player) moves up one step for each person who did not guess the answer correctly. As you can see, picking two answers that are similar (or complete opposites) is key to getting people to guess incorrectly.

When you are a guesser, you may choose to use one of your Kicker tokens (x3 or ?!?). When you set down your guess, laying the x3 token will award you with three total points (instead of one) when you guess correctly. The “?!?” token means you think it is a particularly tough question and you also want to be rewarded when other players miss the guess. You can still score for getting your guess correct, but if you guess incorrectly, you do not score that for yourself. You do, however, receive one point for every other incorrect guess. These tokens are one-time use and are set aside after scored. 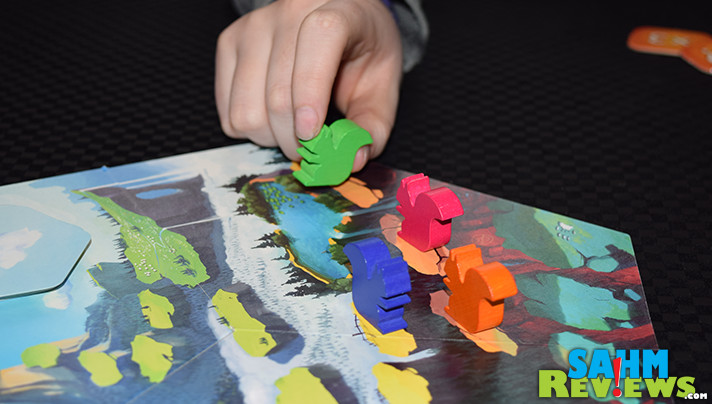 Any time your squirrel lands on or passes through the lake or meadow on the board, you may take back one of your already-used tokens for use on a subsequent turn, even a token you just played. At the end of your turn you will discard the two answer cards you used and draw two more into your hand. The next person in order is now the active squirrel and sets up to ask a question. 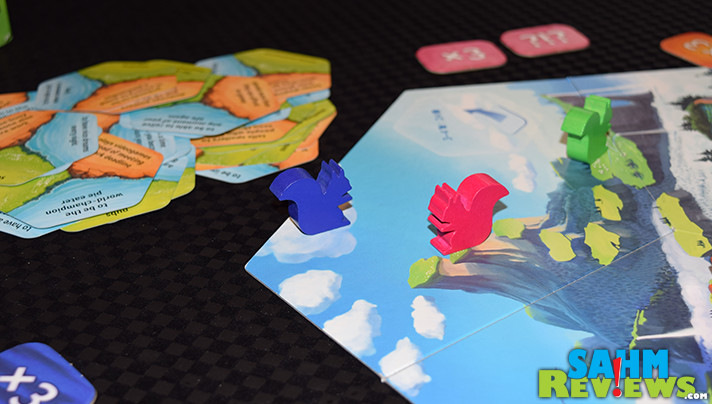 When the last two cards are drawn from the draw pile, it signals the beginning of the final round and each player will get one more turn to be the asker. At this point all players may again retrieve one of their played tokens to use again. The final round is performed in the exact same manner as previous rounds except there is no need to draw cards at the end of your turn, since it is your last one. The winner of That’s a Question is the squirrel who is farthest ahead on the mountain at the end of the game!

In all honesty, we might have overlooked That’s a Question as just another party game if we hadn’t noticed the designer’s name. Did it look familiar to you too? He is also the person behind the creation of the extremely popular Codenames game (and subsequent themed releases)! Pick up a copy of this underappreciated title on Amazon for under $20 or at your local game store. If you’re a fan of Vlaada Chvatil (and Czech Games Edition) like we are, make sure you are following them on Twitter and Facebook to see what they come up with next!

Let’s try a test question: Which would you miss more? Chocolate or flush toilets?!