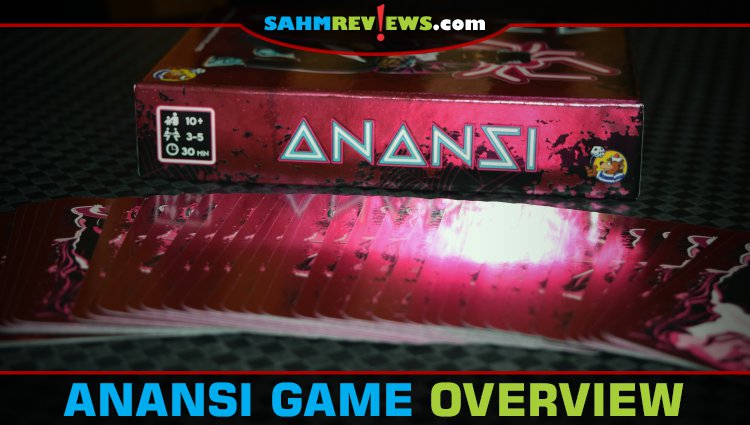 It was just a few weeks ago that we talked about the reissue of Coyote by Asmodee North America. Not only was it an updated version of the classic card game from two decades ago, but the quality of the cards was also amazing. Copper foil backs and brand-new art for both sides made this an incredible value for only $15.

What I forgot to mention is that Coyote is one of three card games just released that all fall into a sort of set. We just got our hands on the second, Anansi, and it also features the same quality card stock with stunning magenta foil on the back.

Set up the play area by laying the three Trump cards in the center of the table in a line. Create a supply deck of thirty-six identical Follower cards next to them. Separate the fifteen Trickster Bonus cards into three matching decks and place them near the Follower cards. There are three suits of Story cards which are shuffled together. The top two are drawn and set directly underneath their matching Trump cards. Players are dealt a hand of cards from the rest of the deck, either ten or eight, depending upon the number of participants.

The three Trump cards will determine the active trump suit during the game. Trump is determined by the card with the most Story cards underneath it. Ties are broken by the left-most suit. During the game cards will be added to this tableau, potentially changing the trump suit between tricks.

To begin a trick, the first player leads with any card. This becomes the active suit, even if the same as the trump suit. All subsequent players must play a card of the matching suit if they can. If you do not, you must play the trump suit if you have one. If you have neither, play any card.

Instead of adding to the trick, you may elect to play any card face-up directly in front of you to gain followers. Take a matching number of Uninspired Followers from the supply deck matching the icons shown on the card you played (0, 1 or 2). This card is also played to the matching column of trump suits, setting the trump for next trick.

Once everyone has played one card, the trick is awarded to the person who played the highest leading suit or the highest trump, and they become the lead person for the next trick. The winning trick is kept in its own story pile by the winning player. At any time, you may then turn over an earned follower to the Inspired side and place it on top of the story (only one per).

When all cards have been played, the round ends. If you have any leftover Uninspired Follower cards that didn’t get placed on a story, you score zero points. If you have placed all Followers onto stories, you will score one point each. If you were able to have all stories covered with the exact correct number of Followers, you also earn one of the round’s Trickster Bonus cards worth the number of points displayed. After three full rounds, the person with the highest point total wins Anansi!

Don’t confuse this card game with another trick-taking card game by the same name. While sporting an identical theme, this version of Anansi is different enough to warrant owning both. Plus, the cards in this copy are much more beautiful. Anansi just hit the market and isn’t quite yet available on Amazon. Ask for it at your favorite local game store or purchase a copy direct from the publisher. Drop them a line on social media (Facebook, Twitter) to let them know you’re anxious for us to preview the third in the line (which we haven’t been able to find a copy of yet!).

What card game has the most beautiful art?