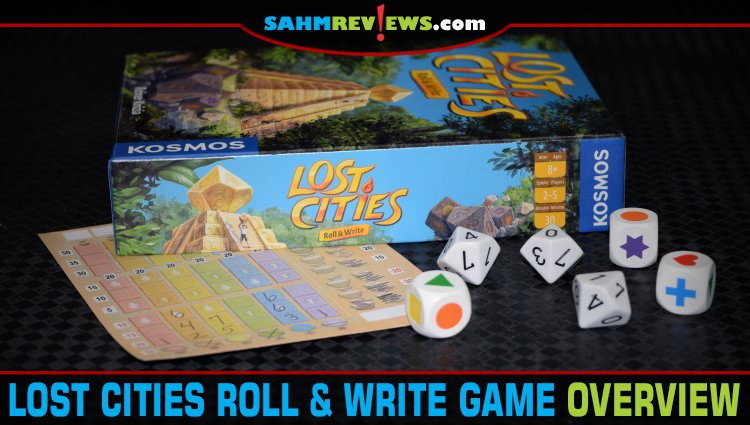 With one of our offspring now away at college and the other too busy to even cross our paths, Scott and I are faced with limited options to scratch the gaming itch. We can 1) focus on 2-player games, 2) chisel out more time for gaming events such as Geekway to the West or 3) find games that are quick and can be enjoyed in the brief windows that Kennedy has in her schedule. Lost Cities Roll & Write from Kosmos not only can be played by two but it also is quick enough that we can squeeze in a game on a school night. It’s a double bonus of awarding us some quality family time with Kennedy as well as a much-needed brain break from her heavy load of studies.

The object of Lost Cities is to stairstep your way up the various columns associated with the different colors of dice. The scoresheet reflects one column for each color/shaped die along with a column of artefacts and one with dice symbols. Those columns are flanked by scoring legends. The bottom of each column displays a doubler circle and the top offers a square for each column’s total.

Each turn, there is one active player with everyone else participating passively. The active player rolls the dice then selects one color/shape die and one number die from the pool of six. That person records the selection in the appropriate column of their scoresheet.

All other players simultaneously evaluate the remaining four dice and identify one color/shape die and one number die to record on their own cards. All passive players are selecting from the same pool so there will be overlap in what is chosen. Only the active player physically removes dice from the pool. After everyone has completed this task, the dice are passed clockwise and the next player becomes the active player.

In the event that someone doesn’t like any of the dice, they may forego selecting them and instead mark off one of the die symbols on the right column. Are you wondering why that would happen? You should! It’s really important. When you go to record your selection, you aren’t randomly writing down any number. All the columns increase as you rise. So each new value must be equal to or greater than the prior recorded number in that column.

There are a number of penalties and bonuses to be had across the scorecard so it’s important to plan accordingly. You can earn double points on a column by selecting a zero and marking off the circle before filling in any other numbers in that column. The first player to reach a column’s bridge earns that bonus while other players have to mark it off. Mark a box that contains an artefact and you’re allowed to cross off an item in the artefact row. When covering an up arrow (acceleration box), you immediately write the same number in the box above it. You’ll need to diversify what you select because you’ll receive negative scores until you reach a specific level. Oh, and if you pass too many times and run out of spots, you become exhausted and earn zero points for that column!

The game ends when all players have become exhausted or all eight bridges have been passed by the combination of players. Scores are tallied and someone earns bragging rights! Lost Cities is the same size box as the Exit escape series so if you’re looking for gift ideas, create a bundle with an assortment of these games! Check out Lost Cities Roll & Write on Amazon or ask about it at your local game store. If you find that you enjoy Lost Cities Roll & Write, you can follow it up with the card game and board game in the same line!

Do you purchase different versions of games you enjoy?