When we first started getting into more serious games as a family, one of the first things we did was search out a local gaming group to play with. Not because we didn’t like playing as a family, but to become better exposed to the thousands upon thousands of games out there that never make it to the shelves of Walmart or Target. Plus it didn’t hurt to have knowledgeable people available to teach us the games instead of having to pour over rulebooks or watching countless Youtube videos.

We were fortunate to find a weekly group via Meetup.com and have been attending nearly every week for over 2 1/2 years. We’ve met dozens of new faces that became friends and spend untold hours discussing rules, themes and upcoming games on Facebook. During this time, one friend began participating in a program that helped publishers demonstrate their games at local game retailers. She was focused on one company in particular, Eagle-Gryphon Games, and spoke highly of their games and the quality of their components.

Thinking back, I believe Francis Drake was the first game by Eagle-Gryphon Games that I had the opportunity to play with her. It was a great experience (I won) and I realized she was right – the quality of the game seemed so much greater than what we were used to. Take that Hasbro!

So when it came time to look for a few games that appealed to everyone in the family, we turned to their catalog and found a number of different game types that everyone was excited to try. What we didn’t realize was how extensive their library was and choosing a few to highlight was a task in and of itself. But we’ve narrowed it down to just three, all of which have been huge hits in our household (and at game night!). Let’s take a look:

If you’re a regular reader, you know abstract games are pretty much my favorite. It should come as no surprise that Blockers! fits solidly into that category. Supporting 2-5 players, it has been released in four different languages since its introduction in 2007!

The goal of the game is to create groups of your own tiles while preventing others from doing the same. Each player starts the game with a pile of 28 like-colored tiles face-down. Five are drawn and placed in the Scrabble-like tile holders. On your turn you use one of these tiles and place in on the board. 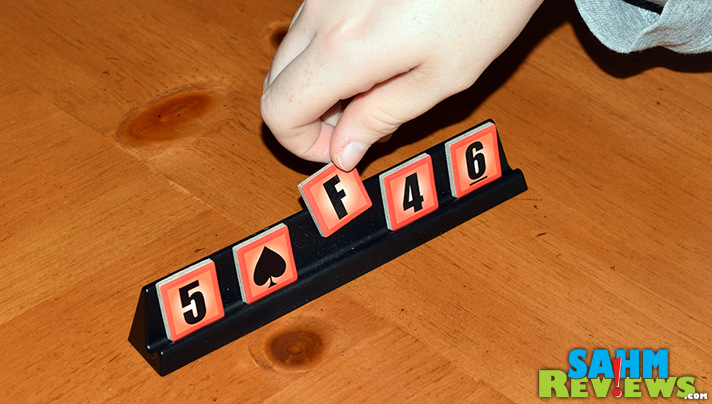 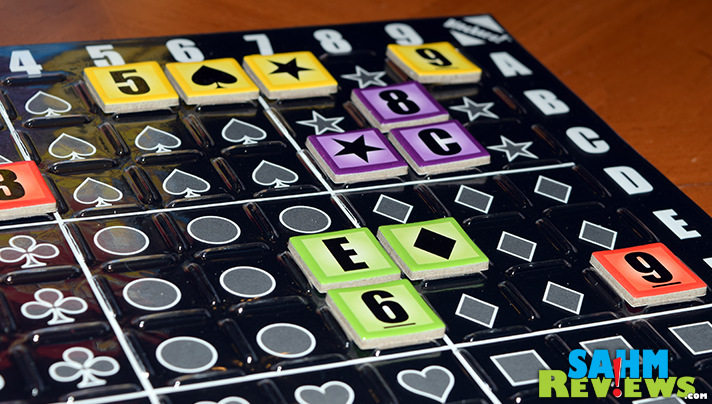 If you cannot legally play one of your five tiles in an empty space, you must capture a previously-placed tile and put it next to your tile holder. Unlike most other games, capturing is something you do NOT want to do, but may be forced to. 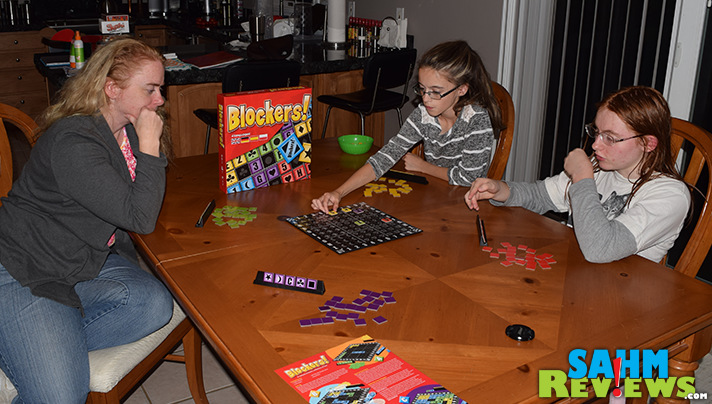 Once the draw pile is depleted, everyone gets one more turn before the game ends. Tally the number of connected groups and add that to the number of captured pieces. Whomever has the lowest total is the winner! 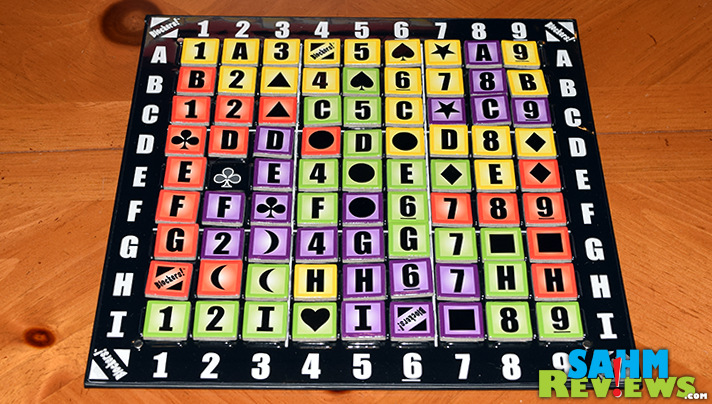 At under $25, Blockers! is a solid abstract easy enough for your younger kids to play, but with enough strategy that even the adults will want another shot at taking them down!

We’re among the many fans that can’t wait for the next Winter Olympics. We sit around the television as a family to watch the most exciting sport of the games – Curling! I kid, but it is our favorite event of the Olympics. I think it’s because it appears to be a sport that is within reach of most anyone who wants to devote the time and expense to train. No “gift from God” needed, just put in the time and effort and you too could make the team!

I’m tempted to say “so easy a caveman can do it” in my best Geico voiceover, but that would be an insult to those that have trained hard to make it to the show. Luckily Eagle-Grypon Games has a solution for the rest of us in Caveman Curling! 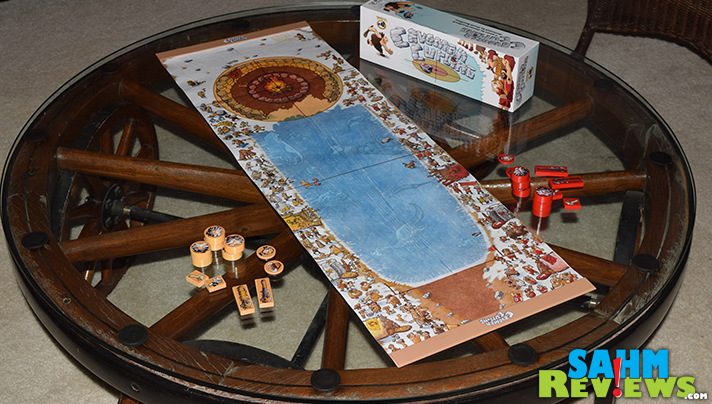 Most games with a large playing area suffer from the same thing, creases in the board. This wouldn’t work for this dexterity game, so Eagle-Gryphon opted to go with a roll-up board made from Tyvek (the same material Fed-Ex envelopes are made from). With weights at each end, it remains flat and in place no matter how crazy the game play gets! 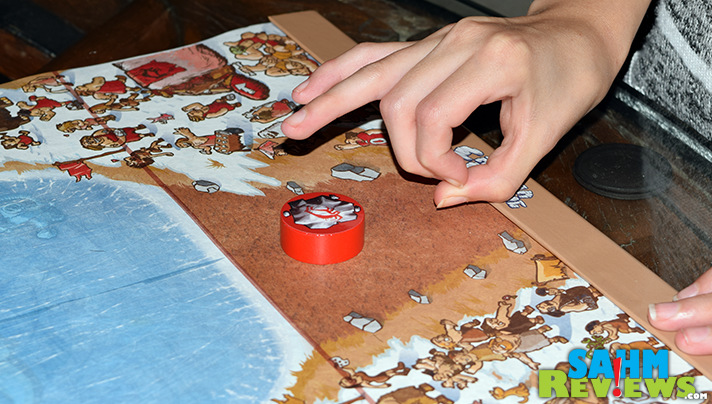 As for how the game plays, if you’ve ever watching Olympic curling, then you already know how Caveman Curling plays. Each player (or team) gets six wooden discs (rocks) to ‘flick’ down towards the cave. Taking turns to try to be the closest to the center of the cave, if you overshoot and hit the back of the board, go off the sides or your rock flips over, that disc is lost and removed from play until next round. 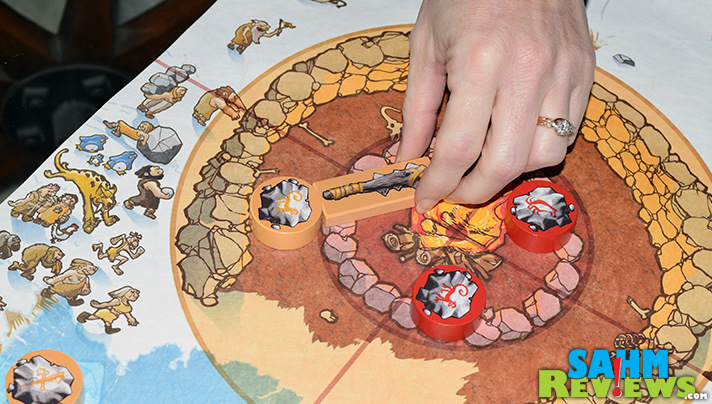 Unlike the professional version (remember, these are cavemen), you can use your hammers to help you along a bit. Each player receives two large and two small hammers they may use to ‘hit’ their rocks a little further (or to a side) after shooting. Each hammer may only be used once per round, but may be the extra nudge you need to get a great score. 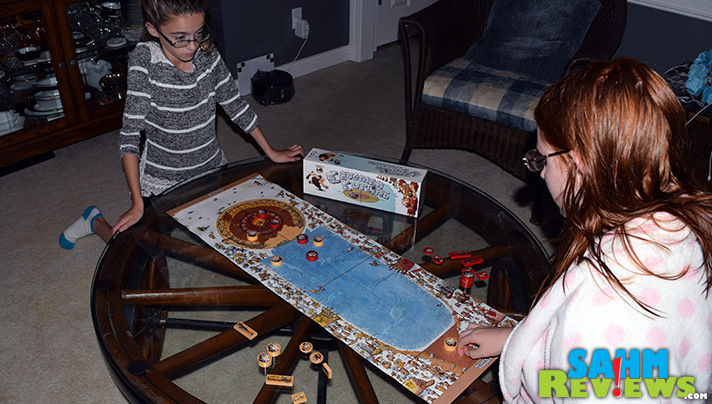 There are also totems you can place on top of an already-shot rock that gives you two options when knocked off. You can either ignore it (removing the totem) and leave your rock in its new position, or remove both from the board, reshooting the rock at the end of the round. 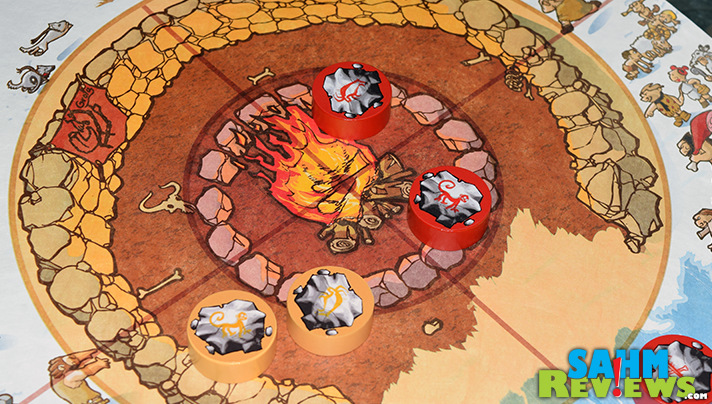 Scoring is the same as the Olympic sport – one point is awarded per rock closer to the center than any of your opponent’s rocks. First player/team to six points wins the game!

Also under $25, Caveman Curling plays in under 15 minutes and should be able to be enjoyed by kids as young as 5 (even though the box says 7+). Don’t want to play in pairs or teams? There are two expansions that add two new-colored tribes to the mix!

Take it to the Limit!

You know we like abstracts, right?! (wink) This one caught our eye because it reminded us of a couple other games we’ve enjoyed. And the rules description had similarities with the hot title from Haba, Karuba. Since Take if to the Limit! was originally issued in 2006, I guess I should say it the other way around – Karuba reminds us of this game! This is definitely a game you’ll need to play more than one time to really develop a strategy thanks to the unique scoring mechanism. 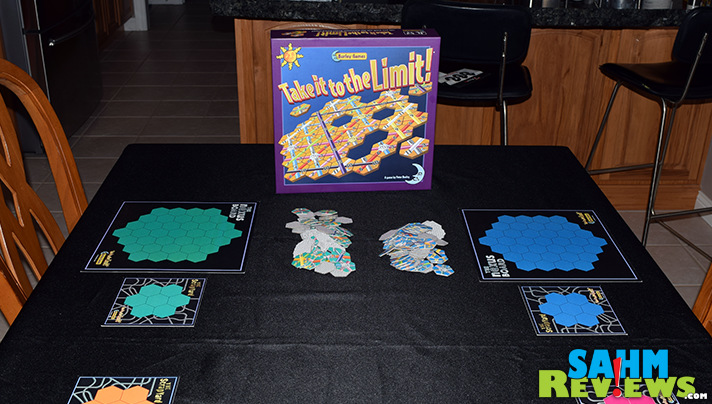 Rather than a central main board to play on, each player receives their own board along with a “ScrapYard” board to play their 64 hexagonal tiles on. Each player has the same exact tiles as their opponent, and as in Karuba, one player becomes the “caller”. This player puts his tiles face-down, while everyone else keeps theirs face-up and arranges them in an order which will make it easy to search through. 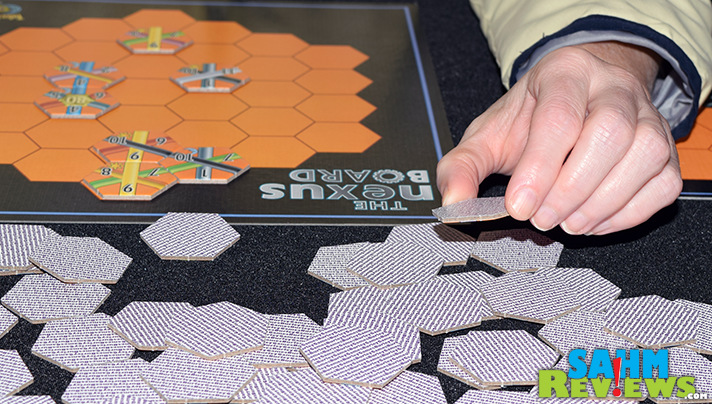 At the beginning of each turn, the caller selects one tile at random from their pile and announces the three numbers on it. All other players locate the same tile in their pile and then everyone places their tile on their boards. The location of the placed tile is completely up to you, and if you feel it doesn’t fit well on your main board, you may elect to place it in your ScrapYard.

This continues for 44 turns, until both your main and ScrapYard boards are completely full. Then players count their scores – this is where it gets interesting! You may score up to three rows in each of the directions (vertically, diagonally to the right and diagonally to the left) and must be of a continuous color. The stripe must connect to both edges of the board and not be interrupted by any other color. 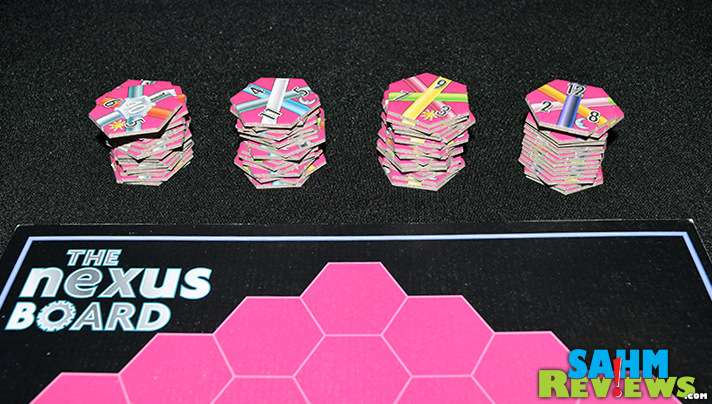 There are also bonus tiles that award extra points if two or three of your scoring rows run through it. Each tile also has either a sun or moon icon which you use to try and create Sunrays or Moonbeams by creating a row across your main board made up of tiles with only one or the other icon on them. You may only score your longest Sunray or Moonbeam, so there is no need to create both. 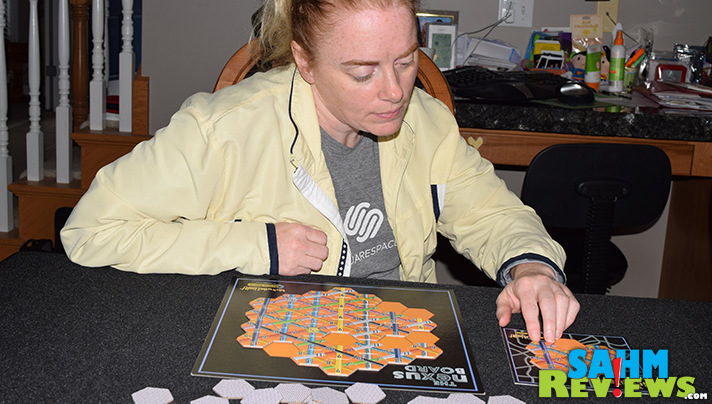 But don’t ignore the ScrapYard! Scoring takes place there also, and might end up penalizing you points if you don’t pay close attention to the tiles and placement there. You MUST have at least 60 points in your ScrapYard with the total of your best three scoring rows, the total score from your best two silver bonus tiles or the score from your best gold bonus tile. If one of these three things does not total 60 points or more, then subtract 60 points from your main board score! Highest total after all calculations wins the game! 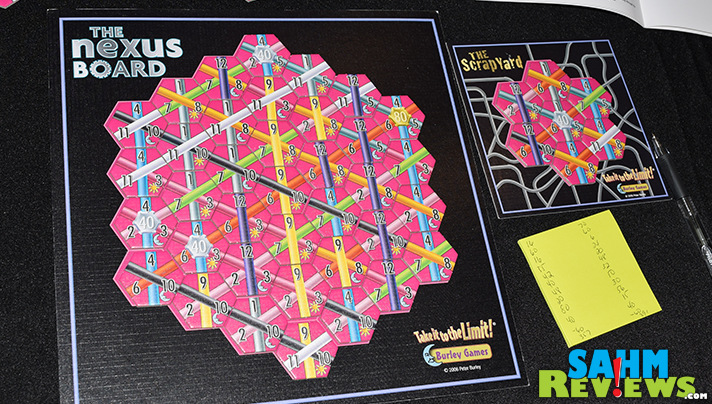 Take it to the Limit! runs a little more at $49.99 direct from Eagle-Gryphon Games, but should be expected since it supports up to six players (each with their own set of tiles) and is a much more complex title. The recommended age limit of 10+ is spot-on and in our experience you can expect a game to last at least an hour.

After perusing Eagle-Gryphon Games’ website, we discovered we had actually played another of their titles in a tournament at Geekway to the West. We’re so excited to have found another company with both family-friendly and hobby-themed titles that gives us great value for our hard-earned money – I’m sure there will be more in our collection in the future! Be sure to check out their huge catalog of games for all ages and follow them on Facebook and Twitter for many new product announcements and the latest about a fantastic upcoming Kickstarter campaign!

19 thoughts on “Games of All Types and for Every Age”