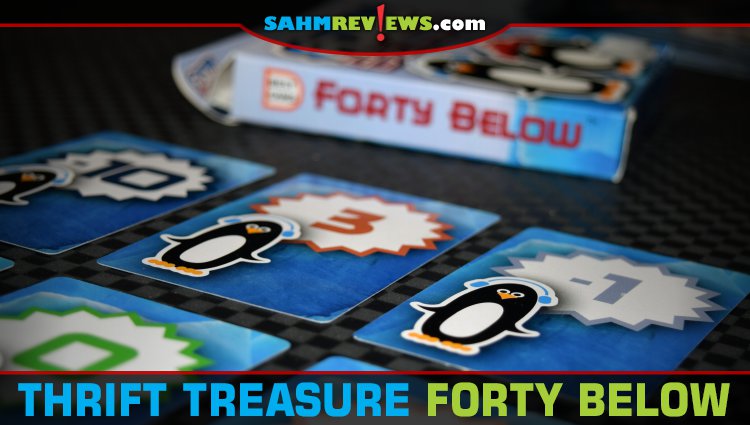 I took a slightly different approach to this week’s Thrift Treasure. We happened across a brand-new copy of Forty Below by D Best Games at a Goodwill store in Iowa City. Any time we run across a new-to-us game which has never been opened, and it’s only a dollar or two, we’ll always take a chance.

Instead of simply learning the game and telling all of you about it, I began researching the company when I noticed the notation in the rules that the organization was from Guttenberg, Iowa. Guttenberg is just a couple of hours north of the Quad Cities, also on the Mississippi River, and bordering Wisconsin. I wasn’t familiar with them, so I wanted to learn more.

D Best Games appears to have started in 2012 solely to publish Forty Below. Shortly thereafter, they moved to Florida, most likely to retire from our harsh Iowa winters. For a few years after their move, they continued selling this card game, their only product. If you’ve ever played Skyjo or LowDown, then you already know how to play Forty Below. I’m sure there have been others with similar mechanics, but these three were all issued about the same time.

In Forty Below, up to six players are trying to score as low as possible during the ten rounds of the game. Each player begins a round with six randomly dealt cards, which they arrange in a three-by-two grid, face down. The rest of the 100-card deck is set in the center of the play area with one card turned over to begin the discard pile.

On a turn a player will do one of three things. They may either flip over one of the cards from their tableau, draw a card from the deck and either swap it with a card they already have or discard it, or grab the top card on the discard pile to replace one of their six cards. Players take turns until one person flips over their sixth card. Then everyone else gets one turn before all cards are revealed.

As mentioned previously, the object is to have the lowest score. You do this by collecting low-valued cards (and even negative-valued ones) and trying to make pairs in a column, which cancel each other out and score as “0”. Match four cards in a block and that counts as “-40”, hence the name, “Forty Below”. Scores are tallied on the included score sheet and a total of ten rounds are played before determining the overall winner. Additionally, any time someone flips their final card to signal the end of the round, and they do not have the overall lowest total of the round, they are assessed a ten-point penalty for every other player who has an equal or lower score.

When compared to Skyjo or LowDown, there is nothing unique about Forty Below. You would only need one in your collection, not all three. We found some ambiguity in the rules for Forty Below as it wasn’t specific as to how to lay down draw or discarded cards to your tableau. In the other games, they typically replaced the cards in the same orientation if drawn, and face-up if taken from the discard pile. Nowhere in the rules for Forty Below is this addressed.

According to multiple business-tracking organizations, D Best Games is no longer in business. Forty Below isn’t available on Amazon, but there is one used copy on eBay at the time of this article. If you can find a copy for a dollar or so, and don’t have a copy of Skyjo or LowDown, it’s worth picking up. Otherwise, leave it behind for someone else to enjoy.

Do you take a chance on games solely based upon price?