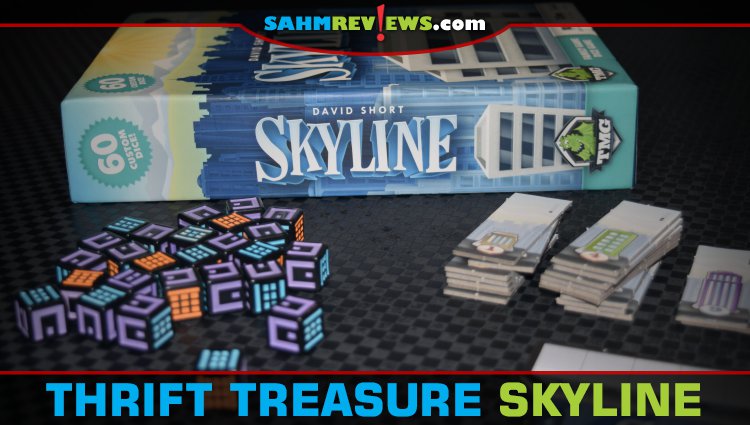 I know I’ve mentioned it before, usually this time of the year. We just returned from the annual Geekway to the West convention in St. Louis. Not only does this convention feature one of the largest play-to-win rooms in the nation, but they also host several other events which are on everyone’s “must-do” lists.

Fancy gaming, trade tables, regional championships and dozens of publishers and demos are but a few things you’ll find at Geekway. One of our favorites is the flea market. It’s two hours of rare and underpriced games! We’ve set up a table in the past, but for the past two Geekways we’ve elected to be buyers rather than sellers. There are just so many deals to be had!

I thought I had every game ever issued by Tasty Minstrel Games until I ran across this copy of Skyline. I’ve always collected their issues because their quality was always a step higher than their competitors. I asked the seller about Skyline, and he mentioned it was a Kickstarter bonus during the campaign for Ground Floor – another game I found in the flea market room at Gen Con a few years back. I believe he was asking $10. Of course, I talked him down a little bit.

Skyline is a push-your-luck dice game about constructing buildings of various heights. The box includes sixty custom dice, thick cardboard building tiles, and a status board and marker. The game supports up to four players and setup is as simple as taking one of each die type (ground floor, upper floor, penthouse) and placing them on the right side of the status board in the “abandoned district”.

If playing with three or four players, beginning with the start players, distribute three ground floor dice in player order with designated faces already showing (high-rise, mid-rise, low-rise – respectively). All other dice are placed in individual piles according to their floor type in the construction yard area on the left side of the status board.

Skyline is played over nine rounds, or until one person builds a high-rise which is six floors tall. On a turn a player will take any three dice from the construction yard, or all the dice in the abandoned district, and roll them. The person must then choose how to use one or more of the dice.

First, they may abandon chosen dice to the abandoned district. They may elect to use their chosen dice to build a new building or add to an existing one. Lastly, they might elect to demolish one of their buildings of any height and return a die back to the construction yard. After making their choice, if there are any dice remaining, they may end their turn by returning them to the construction yard or elect to roll the remaining dice and resolve them in the same manner as before.

The “build” action is the most important and is how you will earn points. When resolving dice using this action, once a die is added to a skyline, it is no longer considered a part of a player’s active dice and may never be changed or moved. Ground floor dice may always be added to a player’s skyline and both upper floor and penthouse dice must be added to a column of the same building type.

When a building is complete, return the dice to the construction yard and take one of the building tiles of the same height. These signify victory points at the end of the game and are printed at the base of the tile. After everyone has had nine turns (rounds) in total, or a player completes a building which is six dice high (finishing the round so all players have an equal number of turns), each player counts their skyline score. The person with the highest total wins! If two or more players are tied, the person among them with the most completed buildings wins.

Included solo player rules allows you to compete against yourself to improve your score over time. Skyline is no longer in print, but you can still find complete copies on eBay for close to the original MSRP. If you’re buying the original Kickstarter version of Ground Floor, make sure the seller throws this one in!

What’s the tallest building you’ve ever been in?