If you’ve been a regular reader, you know I have a thing for TV game shows. You may recall my story about how my Father-in-Law was asked to “Come on down!” Or perhaps you remember how excited I was about getting to go on the set of Family Feud. There was seldom a game show that I didn’t enjoy and watched everything from the original The Wheel of Fortune to silly ones like Supermarket Sweep. When The Game Show Network launched on cable many years ago, I rediscovered some of my favorites (“No whammies, no whammies, no whammies. STOP!”) and found others that I had completely forgotten about. In an odd way, it was a little slice of heaven for me. 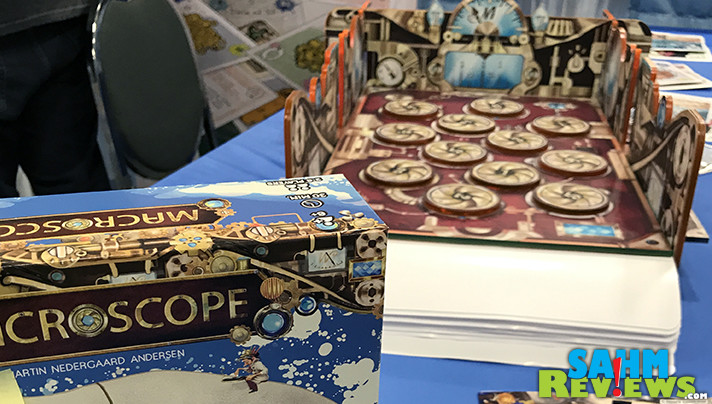 Every once in a while something will happen or I’ll see something that reminds me of a gameshow that I had totally forgotten about. When we saw a giant version of Macroscope on display at the Mayday Games booth at Origins Game Fair, I had flashbacks of a game show. While the name eludes me, I remember that contestants took turns uncovering pieces on a screen in hopes of deciphering the puzzle underneath. The less tiles they flipped, the better. That’s as much as I remember, but it was enough to make the game play of Macroscope easy to pick up on. 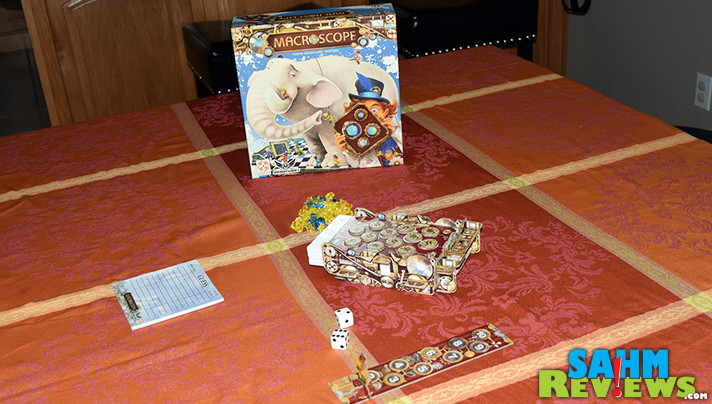 While you can actually solve the puzzles by yourself, Macroscope game is designed for 2-6 players. The 3-D “board” is assembled with the removable cogs placed on top of the unit to cover all the windows. These tokens are numbered from one to six and should be placed randomly each time. The stack of puzzles is placed inside and the top one removed. An active player is selected and the Macroscope is placed using the arrow as reference to the orientation of the hidden image. The arrow should be pointing away from the active player. 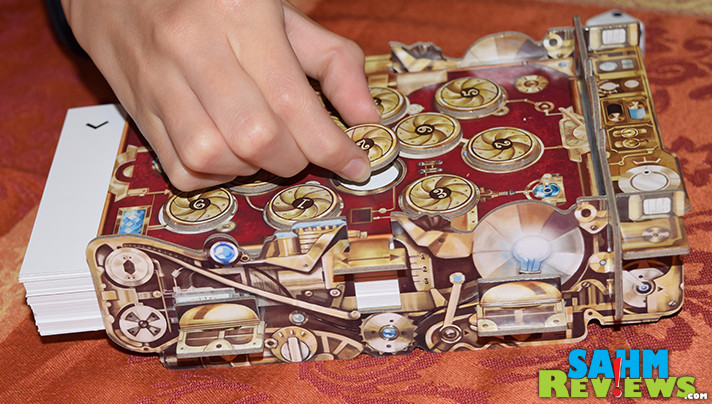 Players begin the game with two yellow crystals. These crystals are the currency as well as end of game victory points. I’ll go over that more in a minute. The rules are simple, but difficulty in deciphering the puzzle will change each time.  On your turn, roll both the dice the you may remove one of the tokens with a number matching one of the dice. After this step, you have three options: Make a guess, remove a token matching the number on the second die or pass the turn to the next person. If you choose to remove the second token, your next options are either to guess or pass to the next person. 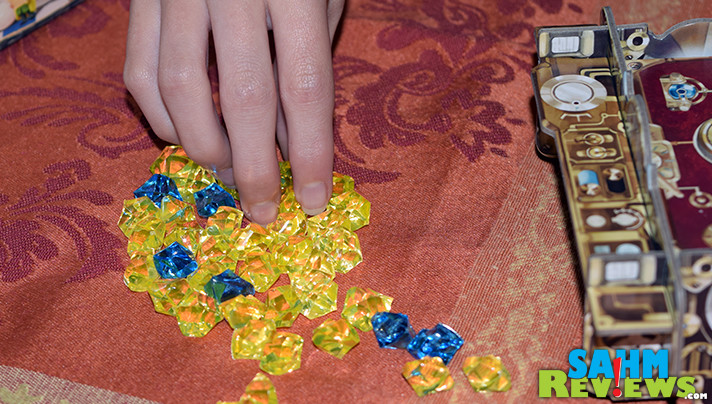 If in either stage of your turn, you choose to make a guess, you simply announce to the other players that you want to guess then proceed to tell what you think the hidden image is. If other players think you are incorrect and want to challenge you, they can. Starting with the one with the least amount of victory points, they simply pay you two yellow crystals and say out loud what they think the answer really is. As I mentioned before, these yellow crystals aren’t just victory points, but they serve as currency. If you don’t have two crystals to pay the active player, you cannot challenge them! Once everyone has determined if they are challenging or not, the closed windows are counted and the picture revealed. The player who guessed correctly received victory points (crystals) equal to the number of covered spaces. An incorrect guess means you’re paying that many instead! 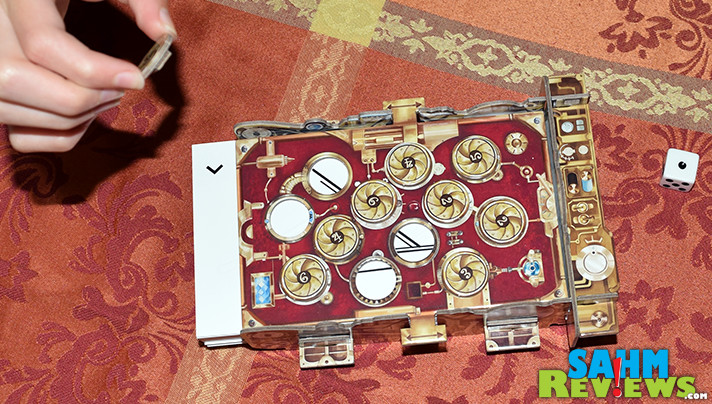 Let’s be honest though. Depending on what dice are rolled and whether or not the picture is even recognizable, you may not feel comfortable making a guess and instead choose to pass. If so, take yellow crystals equal to the number of windows you uncovered. At this point, any other player can opt to make a guess using the same rules as when they challenge. If nobody chooses to guess, the next active player rolls the dice and the process continues until the picture is guessed. If you’re playing with someone who guesses early (and correctly), don’t be sucked into the idea that you need to guess early also. Speaking from experience, if you guess incorrectly, it will leave you with no crystals which means you can’t guess during other people’s turns. 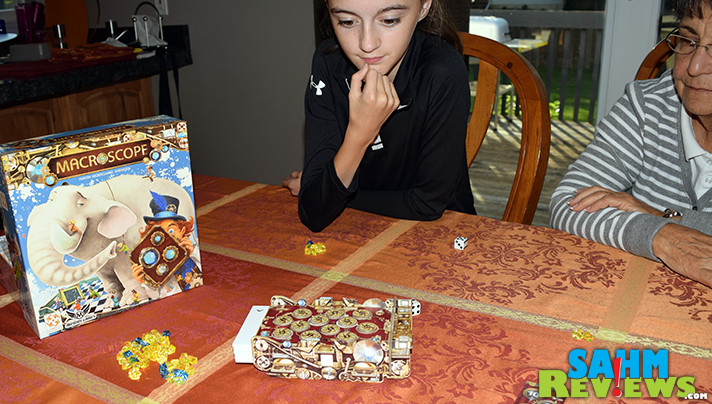 The game continues for 10 rounds, tracked based on the number of pictures – not the number of active players. What this means is that it will take several games before you’ve revealed all the images on the double-sided picture cards. While eventually you will see all the cards, it is going to take quite a while before that happens! You can get multiple hours of entertainment for on Amazon or pick up a copy direct from Mayday Games.

We’re extremely excited that Mayday Games has offered for us to give away a copy of the Macroscope to one of our readers. Unlike our normal giveaways that are open to U.S. entrants only, they have agreed to handle prize fulfillment worldwide! Hop over to Twitter or Facebook and let Mayday Games know what you think of Macroscope and check out what promotions, sales and upcoming game releases.

46 thoughts on “Macroscope Board Game Overview”