We talk about a variety of games around here (shocker, eh?) and try to showcase ones for different personalities, play styles and interests. While dice and cooperative games rank as my favorites, I also enjoy strategy games because they make me think. For the same reason, there are some games that I’m drawn to because of their puzzle-y nature like Macroscope, Dimension, Alchemists and pretty much any type of escape room game.

These are examples of how game dynamics have evolved over the years from the mainstays that we all knew as a kid. Trends are constantly changing as new designers get their stride. Last year we told you about a fledgling designer and the release of Flag Dash. Shortly after we featured the game, we learned that it had been picked up for publication by an established game company. We’ve kept in touch with him since that time and were excited when he asked us to livestream a demo of Gearworks at Origins earlier this year. I’m not sure how to describe it other than to say it has elements of Sudoku built into it. Rather than try to explain it any more, let me just walk you through an overview of Gearworks by Piecekeeper Games. 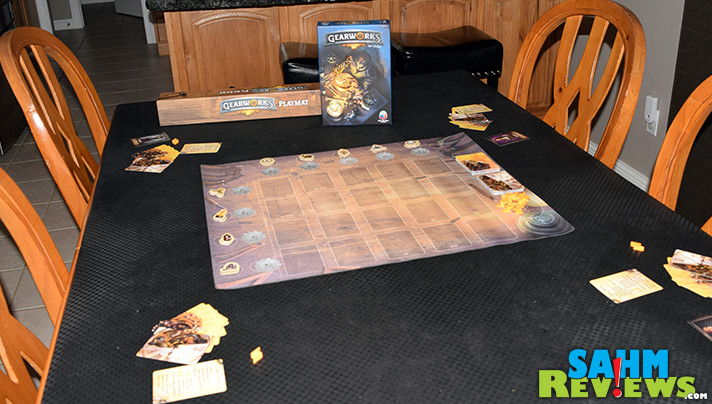 Let me start by saying that the game includes various types of cards, gear tokens, sparks and parts for building contraptions. While Gearworks can be played right out of the box, it doesn’t have an actual board. This is one of those situations where I think the playmat (which is sold separately) makes a huge difference. It’s beautiful and helps keep things lined up properly which is pretty important with so many small pieces that require specific placement on the table. To begin the game, you’ll place the 9 gears face down along the edges to form a 5×4 grid with A-E across the top to mark the columns and 1-4 marking the rows. You’ll shuffle the gear cards and create a face-down deck alongside the grid. Draw four gear cards and place them face up in the B1, A2, E3 and D4 positions in a 3 or 4 player game or as noted in the rules for 2 player or solo. These give a starting point for the Sudoku-ish game mechanics. Place all the parts next to their respective gears. Shuffle the contraption cards and form a deck then place all the sparks in a pile next to the board. Finally, give each player a tinkerer character card, a reference card, 5 gear cards and sparks according to the number of people playing. 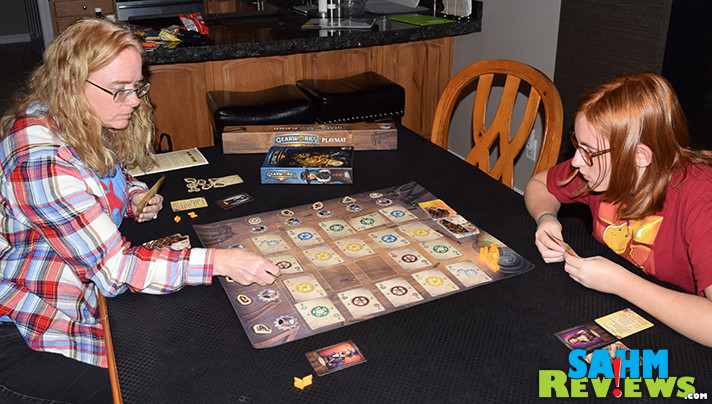 Gearworks is played across three rounds. You’re acting as tinkerers in a workshop trying to fix a clockwork machine. Each tinkerer has a special skill set as noted on their character card. You’ll be reassembling gear cards into the grid in order to earn parts which will be used to build contraptions according to the blueprints you have in front of you. At the completion of the three rounds, the tinkerer with the most points wins. 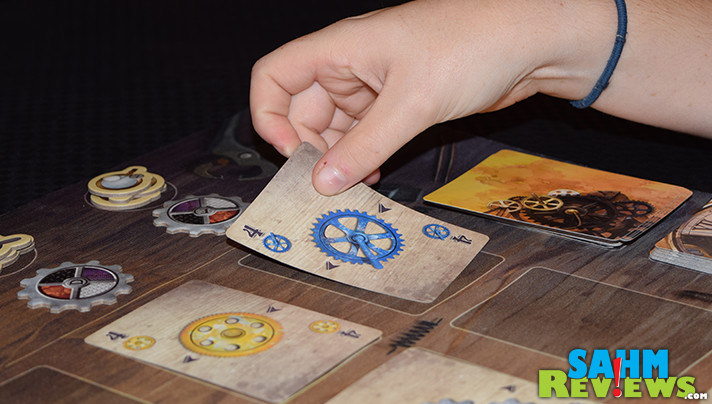 On your turn, you MUST play a gear card into the grid or you may opt to pass instead. In addition, you might choose to use your tinkerer’s ability, gain sparks or spend sparks to take additional actions. The foundation of the game is in the grid. To earn parts, you need to be in control of the columns and/or rows in the grid. Remember how I referred to it as Sudoku-ish? Well, it has to do with the requirements for the rows and columns. In each column, there can only be one of each color. In each row, there can only be numbers in ascending or descending order (or equal to the number next to it). If you are able to play a card into the grid somewhere, you must do it or you must pass. 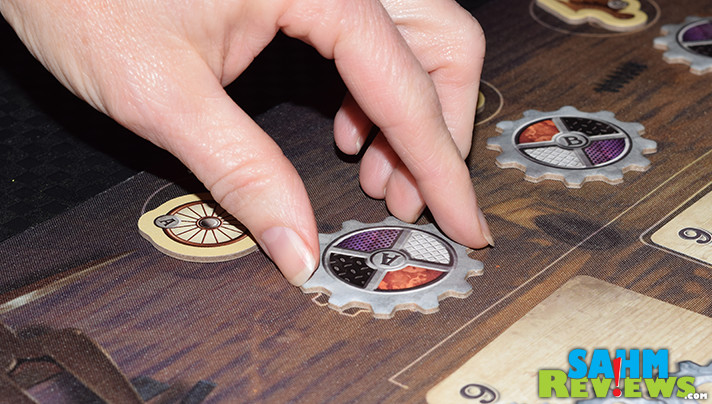 After you successfully play a card, you flip the gear in that row and column or rotate it so your player color points toward the row or column. This means you’re in control of that particular line of gear cards. After everyone in the round passes, the rows and columns are double-checked and the tinkerer who controls it receives one of the related parts. 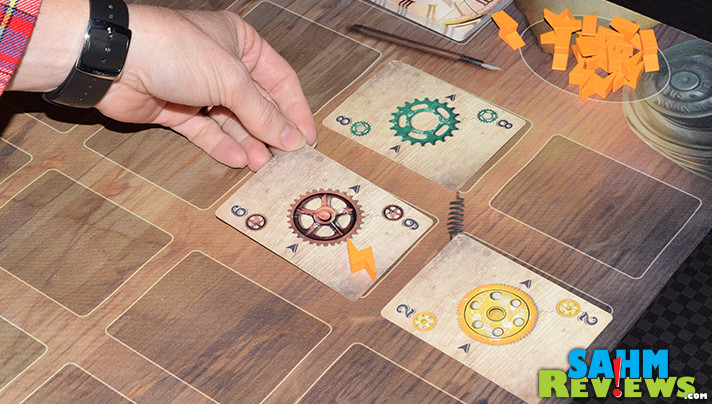 When you play a gear card, you also have an opportunity to earn sparks. After placing a card, compare the number to those in each direction. If you can add or subtract two of those numbers and they equal the number you just played then you earn a spark. While this is important to keep in mind, it can also seriously impact the flow of the rows if you are more focused on getting a spark than on making sure your cards will have places in the grid.

At any point, you may spend sparks to draw a new gear or contraption card, jump back in after passing or play over the top of an existing card in the grid. These tactics are incredibly important because it may allow you to play longer or attain more parts, especially as the end of the round nears. 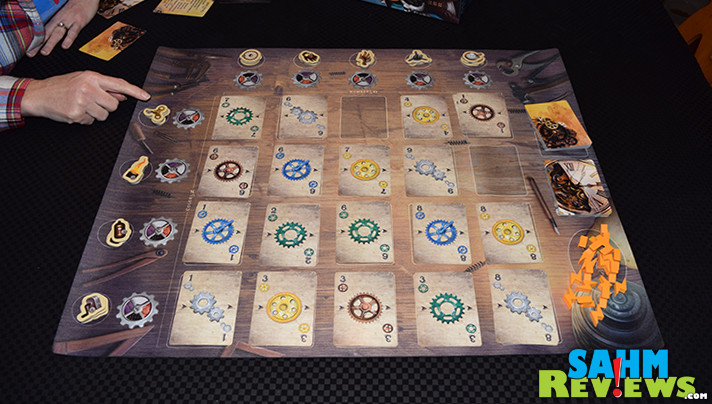 When all players have passed, the round ends. You’ll acquire whatever parts you earned and partially or completely build contraptions. These contraptions in addition to any unused parts are set aside and will not be accessible in future rounds. Thankfully, they’re all worth points and those can add up quickly. 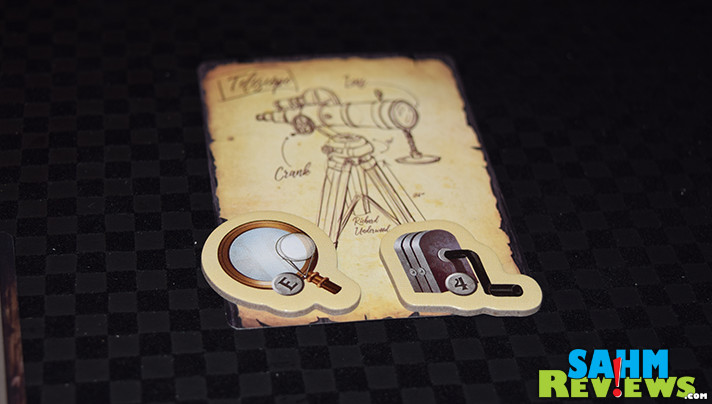 After three rounds, whomever has the most points from completed contraptions (9 points), partial contraptions (4 points), loose parts (2 points) and sparks (1 point) is declared the grand tinkerer.

While Gearworks is best with 3 or 4 players, not only can you play with two but it also contains rules for a solo mode. You can tinker away and find Deluxe copies of Gearworks (which include upgraded components) on Amazon for around $35 or regular versions for around $27. Otherwise, ask your local game store if they have any in stock. As I mentioned before, the game doesn’t require a playmat, but the experience is much better with it. Perhaps future releases of the game will include a board for those of us who don’t like how messy things feel when the pieces aren’t in just the right places.

Have you ever tinkered with something to try to repair it?

6 thoughts on “Gearworks Board Game Overview”