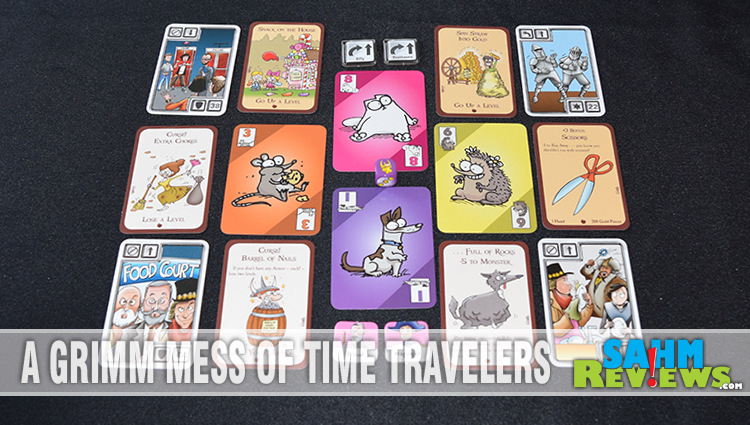 More Fun at Corner of Happy and Healthy

Over the course of the past couple years, everyone we know has heard us harp about the board game renaissance. We don’t need to carve out time for “Family Game Night” because it’s a fixed part of our schedule.

There are a lot of people who only think of Monopoly and Clue when we say family board games and Risk when it’s something more strategic. That’s one of the reasons we are so vocal about the variety of games on the market. The building of strategic thinking skills. The themes to fit any interest type. The educational benefits of board games. We see so many opportunities to introduce both adults and kids to games that aren’t just games for kids or games for adults but are games. Period. Games that everyone can play together. 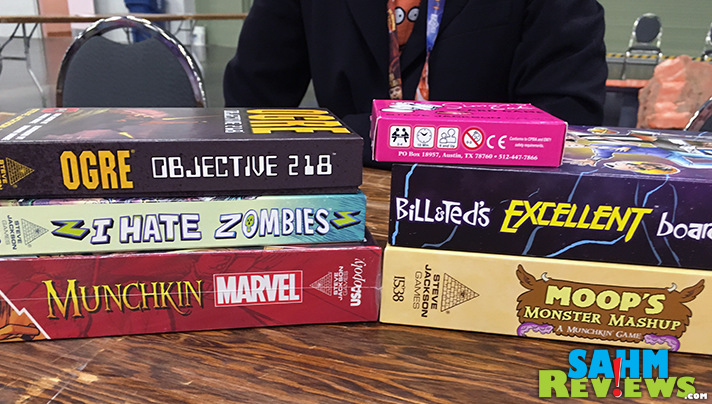 During our trip to Origins Game Fair, we had a chance to preview some new releases from Steve Jackson Games. Among them were Simon’s Cat and Bill & Ted’s Excellent Board Game. We also had a chat about Munchkin Marvel since we all know my fascination with all things Marvel. I had always known Steve Jackson Games for their Munchkin line and only that so it was cool to see the variety of games on the docket for release. One will be available at Target, one that uses an iconic 80’s team to teach programming and another is paving a new path for the hobby game industry. 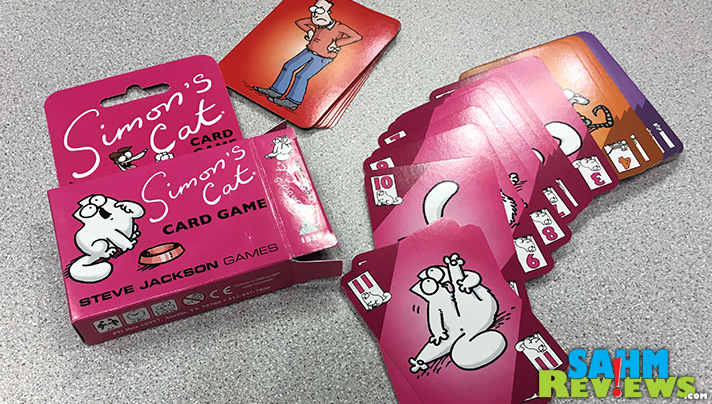 Available at Target, Simon’s Cat is a simple card game based on the YouTube series by the same name. Until the game, I didn’t realize Simon’s Cat was such a fad with plush toys, books and T-Shirts. Now that I’ve seen it, I can’t UNSEE it. This cat is everywhere which is perfect since cat-themed games are popping up everywhere too. 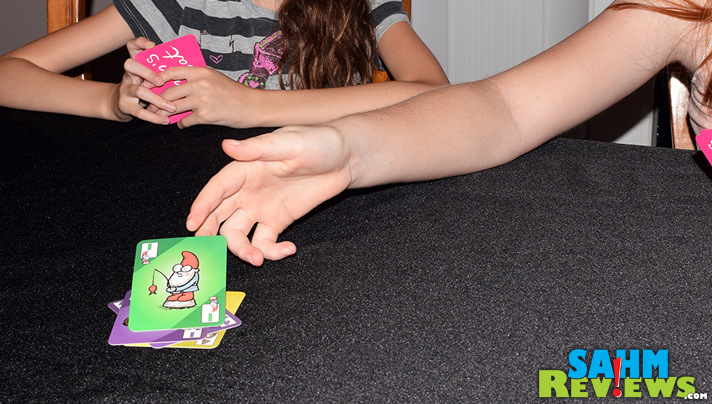 In this game, the goal is to have the least amount of mess and just like in real life, either you are part of the mischief or you get stuck with the mess. 36 Mischief cards comprised of various characters including 10 cats, 8 kittens, 6 hedgehogs, 6 dogs, 4 mice and 2 gnomes are shuffled and randomly divided equally to all players. The first player lays one of their mischief cards. The following player lays down a card matching the color or number of the prior mischief then play continues. Unlike games such as Uno or Wonky, there is no skipping or manipulating the play. 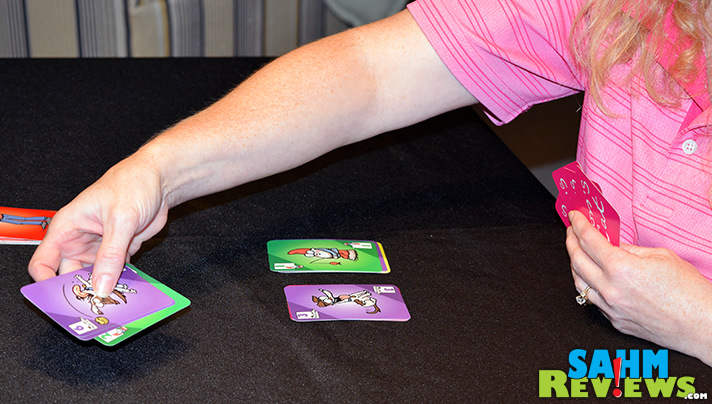 When a player is unable to match, they claim the existing mess. They place the stack in front of them then immediately begin a new mess with a card from their hand. This process continues until nobody has cards in their hands. The stacks are counted and the person with the most messes gets a Simon card. The game is over when one person has three Simon cards.

You should be able to find Simon’s Cat at Target or pick up a copy on Amazon. 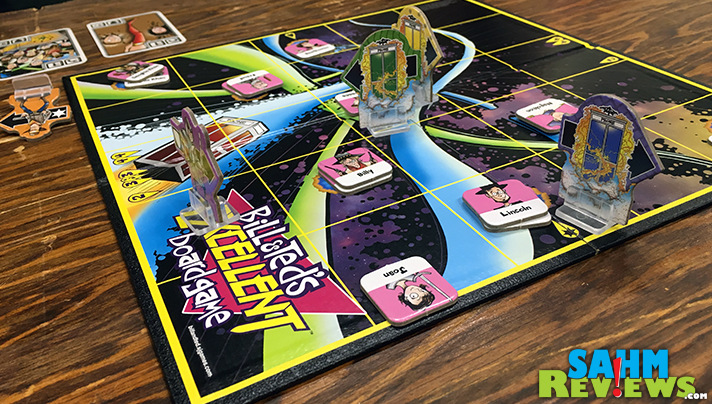 When we moved from Iowa to California, our first residence was an apartment in San Dimas. I lost track of how many people commented about the location, referencing Bill & Ted’s Excellent Adventure. In the alternate-timeline board game by the same name, players are using their time-travel phone booth to journey through history in an attempt to collect historical people in hopes of scoring an A+ on tomorrow’s history report. 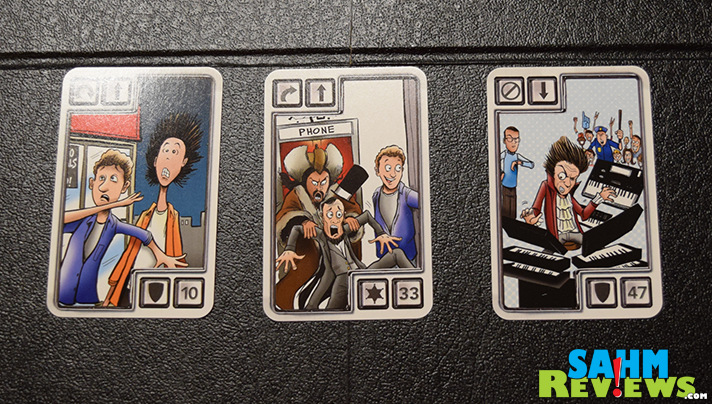 You can’t travel just by sitting still so each player needs to play the appropriate cards to send their time-traveling phone booth in the right direction. Cards displaying directional movements are the starting mechanism. The icons on the top left represent the movements you’ll take while the icon on the bottom right represents which bad guy will take the same movements. You may think you have your route planned but that will change. At the beginning of each round, players select a card and place it in front of them to the right of their player marker. Following that, everyone simultaneously places another. Everyone flips their first card and the lowest number is the first player for the round.

As I mentioned, the bad guys move also. And unless you were the first player (by laying the lowest number on that first card) then you won’t know where they will be when your turn comes up. You can plan and program all you want and still end up running face to face with someone looking to knock you down. The number of rounds is determined by the number of players, but the goal is to be the player with the most historical figures when all rounds are complete. 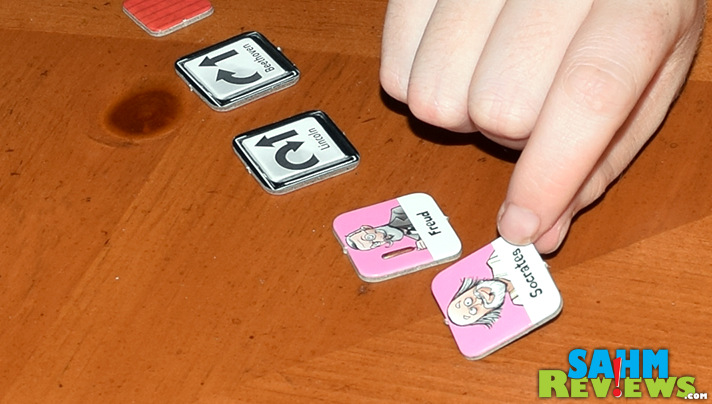 While the bad guys disrupt your plans, the historical figures will assist in your movement. The back of each historical character tile includes two bonus movements that you’ll use in conjunction with your cards. The concept is basic programming and cannot be switched once you have laid them down. Working from left to right, your character moves in accordance with the arrows on the tiles and cards you placed. As an example, the arrow curving left rotates your character left. A u-turn arrow turns you back the way you came. The up arrow moves your phone booth forward one space. As you pass over a space containing a historical figure, you pick up the top chip. Run into a bad guy and you’ll drop one.

If you collect historical figures, those chips are placed to the left of your player marker. At the beginning of the next round, these historical figures are flipped to show new movements. They will be completed prior to the cards you place from your hand.

Bill & Teds Excellent Board Game is available on Amazon for right around $20. 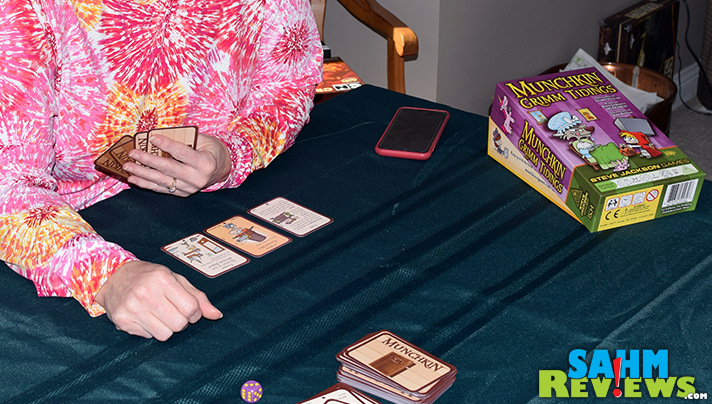 Unlike when we first moved to California in the 90’s, Walgreens has made a strong presence across the country. It has become a regular spot for couponers with paperless coupons, offers a rewards program, photo services and a full-service pharmacy. Known for their health and wellness products, Walgreens has gradually expanded to become more of a full service store. Steve Jackson Games has taken the leap to make the toy and game section better than it was before by making it’s latest game, Munchkin Grimm Tidings, available at Walgreens exclusively. They are the first game publisher to offer a drugstore exclusive rights to a hobby game. Let me tell you… that’s important. During Gen Con we heard of MANY Target exclusives so it will be interesting to see how many follow in the path set by Steve Jackson Games and start focusing on Walgreens!

Munchkin is a very popular game with multiple themes and expansions including Oz, Steampunk, Conan, Nightmare Before Christmas, Cthulhu, Zombies, Adventure Time and even the previously mentioned Munchkin Marvel which was published in conjunction with USAopoly. That’s just a small listing! 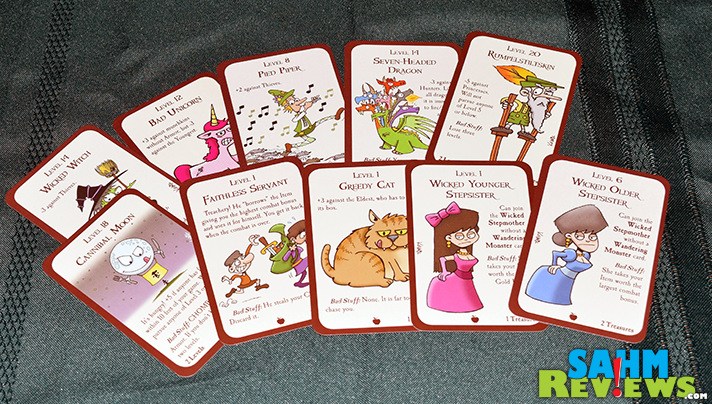 Munchkin Grimm Tidings is based on the popular fairy tales that we all grew up with, allowing players to battle characters such as Rumpelstiltskin, the Wicked Stepmother, Pied Piper and the Wicked Witch. Each has abilities and bad things can happen if your character isn’t strong enough or well-enough equipped to take on the battle. To make the endeavor more interesting, there are items such as poisoned apples and a disguised monster that make battles more difficult while items such as golden eggs and braids that can assist the player. 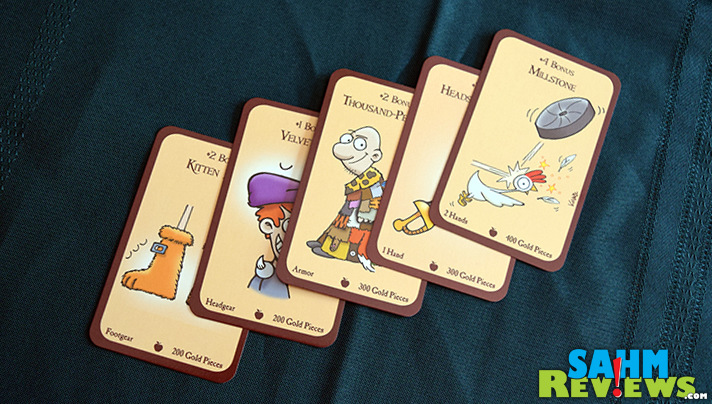 At any time, players can utilize cards from their hand to improve their status, weapons and armor. On a player’s turn, they draw from stack labeled “Kick open the door” and place it face up. If it’s a monster, they battle. If it’s anything else, they place it in their hand. If they battle and win, the player goes up a level and takes the rewards designated on the monster card. If they cannot win the battle, they roll a die to see if they can successfully escape.

What’s interesting is that other players can come to the aid of each other but more often than not, they make the battles harder. After all, how can you win if you keep helping the other players?! The game is over when one player makes it to level 10. Munchkin Grimm Tidings is viewed as a starter version of the Munchkin games, plays in about an hour and is targeted at kids ages 10 and up. But if your kids are playing other strategy or battle games then they’re sure to pick up on this one even if slightly under age 10. The next time you’re at Walgreens, check this one out.

I know it’s been a long post and if you’re reading this part then thanks for sticking around for all of it! If you’ve never played anything from Steve Jackson Games, they are worth checking out. With a variety of themes and types like the three different we’ve featured here, you’re bound to find one that strikes a cord for you.

Products from Steve Jackson Games can be found at a variety of places including on Amazon, Target and of course, at Walgreens. Visit their website to see the numerous options then check them out on Facebook and Twitter to learn about other exciting announcements.

Will a Walgreens exclusive game make you more likely to shop in the game and toy aisle at Walgreens?

41 comments on «More Fun at Corner of Happy and Healthy»