I’ve always considered myself a bit better informed about the world than the average American. Having lived for nearly 5 years in West Germany, I was exposed to other languages and cultures at an early age. At my company in California I had Mexican and Chinese business partners and learned quite a bit from both about their cultures and traditions. So I have to admit I recently made an assumption about a game that showed my American-centric thinking.

When our friends at Tasty Minstrel Games showed us their latest release, Orléans, I erroneously assumed it was a game about New Orleans. Maybe with a theme about hurricanes and flooding! (Too soon!?) It was after reading through the instructions that I realized my faux pas – this was set in Orléans, a city in north-central France. New Orleans was actually named after Orléans, so I should get points for being close! 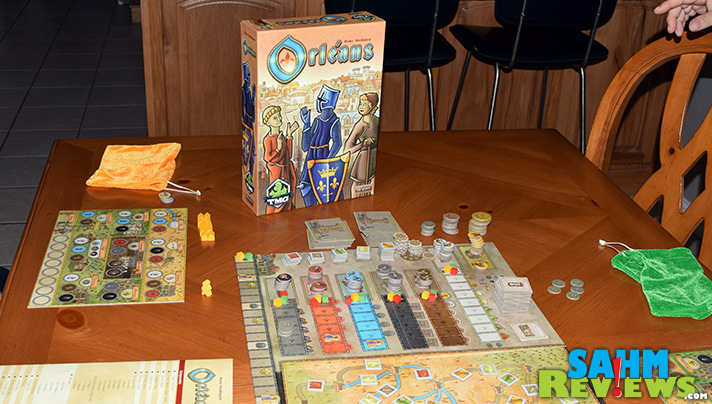 I had actually heard the buzz surrounding this game before playing it. Nominated for numerous industry awards, including the coveted 2015 Kennerspiel des Jahres (Hobby Game of the Year), Orléans is available in two versions! The base game shown here and a Kickstarter-exclusive Deluxe version with nearly every component upgraded!

So what makes Orléans a game that is currently on over 2,700 BGG wantlists? It seamlessly combines a number of tried-and-true board game mechanics into one game that supports up to five players. Rather than take you through the full rules (which can be found here), let’s take a look at the different mechanics the game employs.

This is a feature not typically seen in a Euro-style game and usually reserved for card-based titles. We recently talked about an exception to this rule in Puzzle Strike where they used poker-styled chips instead of cards, and Orléans does something similar with small, round tokens with different player types depicted. 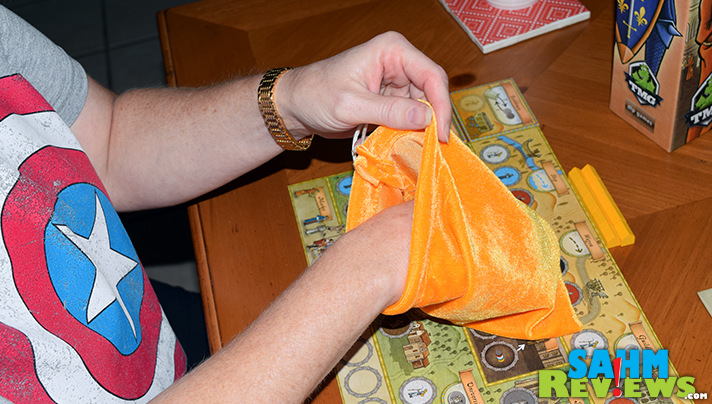 Each player has a velvet bag and four starting characters. Each turn you will draw a certain number of tokens to use that round and have the opportunity to add additional or new character types to your bag. You never know which types you will pull on a particular turn, and you will need them to declare what actions you’ll be taking on your turn.

A common technique used in today’s game is allowing you to choose your actions from a list of many. You’d either select a certain number or be limited based upon how many meeples you have to place. In Orléans you have to build a ‘recipe’ of characters in order to activate an action. 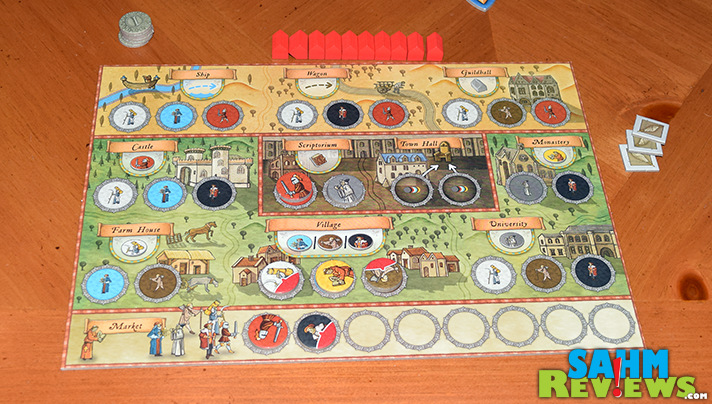 Using your drawn tokens you assign them to different cities on your own player board which each have their own action. Some allow you to hire new people, while others let you travel along the map board. Once you place a token on the board you may not move it, so you must plan your actions ahead a round or two! 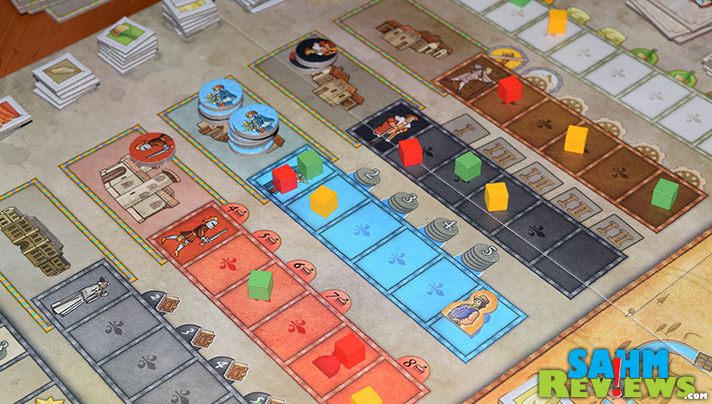 You’ll also find additional bonuses for sticking to an action as you move along an advancement track. In many cases the first player to get to the end of the track will receive a token that awards additional end-game points!

Also like many Euro-styled games, Orléans has a board where you move a meeple across a map. And typically, you are not limited to a linear progression. You may move in any direction and can also retrace your steps. 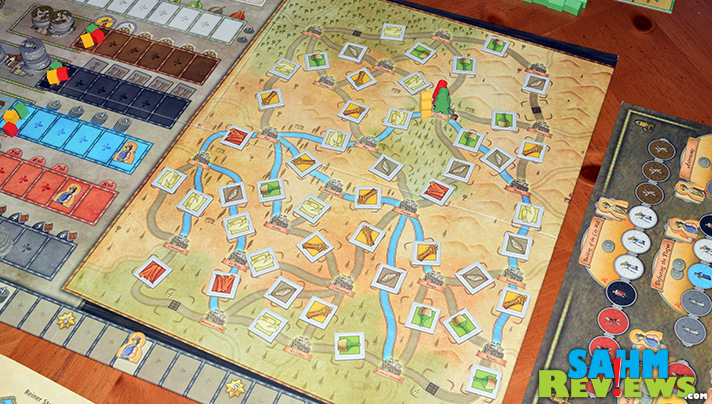 The only limitation is the type of travel you can partake, either by land or water. Each town connection is denoted by a certain type and you must take the appropriate action to take that route.

In the aforementioned mechanic, when you move across the map you are doing so in order to collect the resources along the way. These are used during the game to pay for certain events, but are mostly end-game victory points worth varying amounts depending on the type of good. 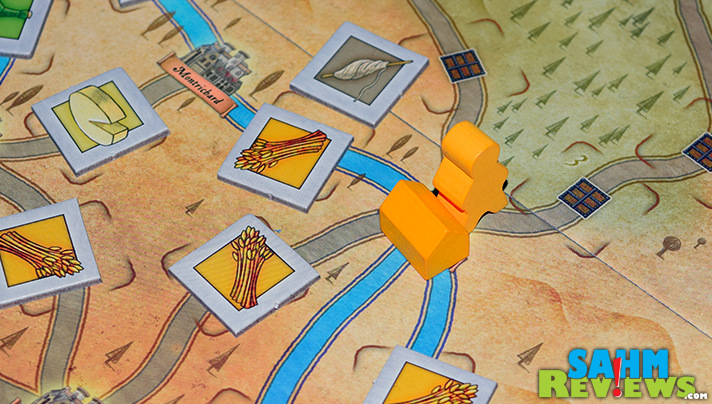 There are also additional bonus cards to purchase that will award you for collecting diverse sets of goods (one of each type).

This classic mechanic is used twice in Orléans. On the same map where you collect resources you can also build buildings, but only one person can build in a town. Being first through the area locks out your opponents and forces them to take a different route. 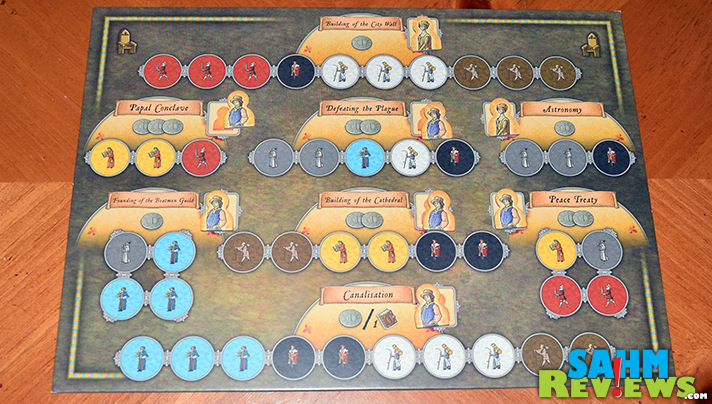 There is also an additional “Beneficial Deeds” board where you can send your employees to perform works of charity. This is also the method in which you rid your bag of unwanted workers. Each deed has its own ‘recipe’ of workers needed to complete the task. Each time you send one of yours to an area you are awarded with money or fame, and get additional bonuses if you place the last marker in a particular task.

By wrapping these major (and popular) game mechanics all under one title, it is no wonder Orléans is on everyone’s wishlist. While a Deluxe copy will set you back nearly $100, you can pick up this regular version for well under the $60 MSRP on Amazon. Having played our copy over a dozen times already, we can safely say it’s one of the best values in games today.

AND we hear rumor of an expansion in the future, so be sure to keep an eye on Tasty Minstrel’s Facebook and Twitter timelines for announcements on when the Kickstarter will go live!

Have you ever been to Orléans? Or New Orleans?

78 comments on «Orléans Board Game Overview»