Sometimes we play a game because it reminds us of a location (Orléans). Others appeal to our chosen careers (Bulls & Bears). While other we grab because…well…it just looks like a lot of fun (Pitch Car)! Every once in a while we play a game that reverses one of these roles, remembering something from our past that is triggered by the game itself. That’s exactly what happened this week while playing Tasty Minstrel Games‘ new Dairyman dice game.

It got us to talking about how milk used to be delivered to the homes by the local milkman. You can still catch glimpses of this if you watch reruns of Leave it to Beaver or The Andy Griffith Show. Fresh milk was delivered to the porch in glass bottles, with the empties being set out and returned at the same time. We thought this was a staple of a time long since passed. It isn’t so!

One place we always stop at when visiting Chicago is one of the various Oberweis stores. Founded in Aurora, Illinois 90 years ago, they currently operate dozens of locations in the Chicagoland area and have begun expanding into other metro areas (St. Louis already has four locations!). Their goal is simple – to make the best tasting milk possible. Let me tell you, it eventually turns into the best tasting milkshakes I’ve ever had. And I’ve sampled shakes a LOT. 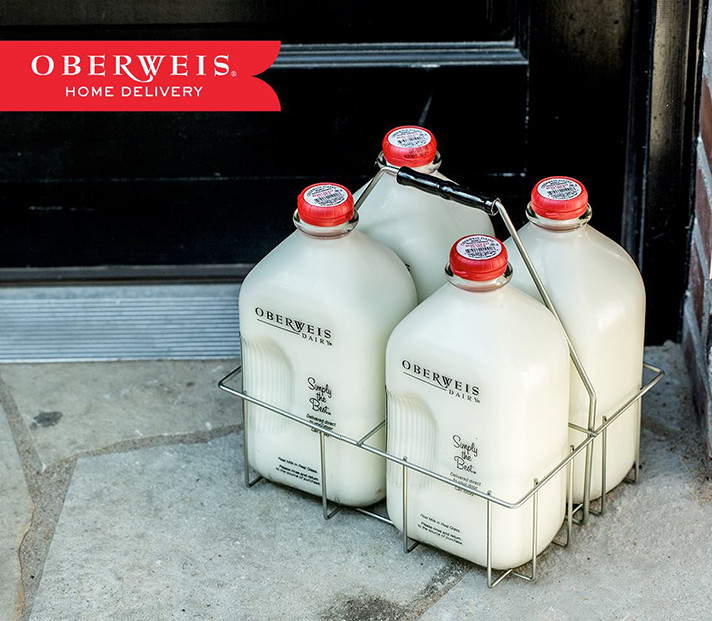 But what’s unique is they are still doing something I thought was not possible (profitable) in this day and age –  home delivery of milk!  That’s right, on a schedule you set you can receive fresh milk, less than 36 hours old, delivered to a waiting porch box. And yes, it comes in glass bottles.

So what about a board game had us thinking about chocolate shakes in another city? Dairyman has you taking on the role of a small milk producer trying to fulfill the orders of the farm owner. And so are your opponents. You have to be able to produce a certain amount in order to fill the demand but not over-produce and allow your product to spoil. 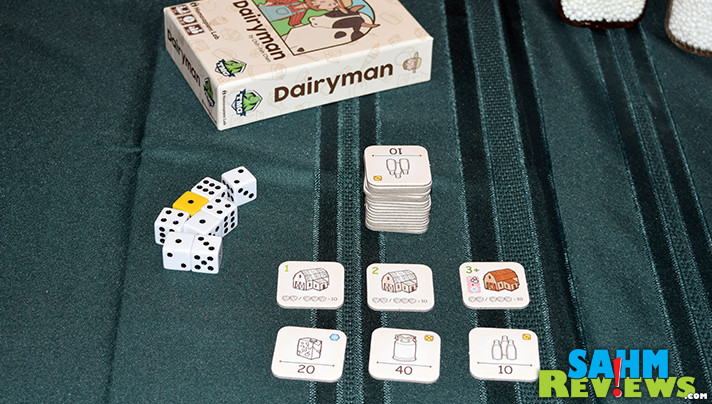 In the box you’ll find 3 barn tiles, 22 various milk tiles, 12 colored dice and an assortment of backorder and freeze tokens. The barn tiles are set out in order in the center of the table and three random milk tiles are dealt out underneath them. The remaining milk tiles are put in a draw stack close by. In addition, backorder tokens equal to the number of players (plus one) are readied in the play area, with any extras put back into the box. Red dice also equal to the number of players are also used. 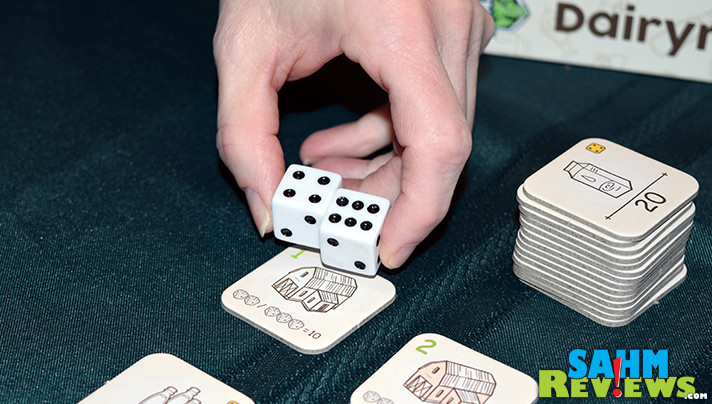 On your turn you will roll the remaining eight dice, comprised of seven white and one yellow die. In order to fulfill the barn’s milk order, you must set aside dice summing up to 10. The limitation is that you must do this with only two or three dice. Set them on the barn and decide if you’d like to continue rolling to fill the next barn. 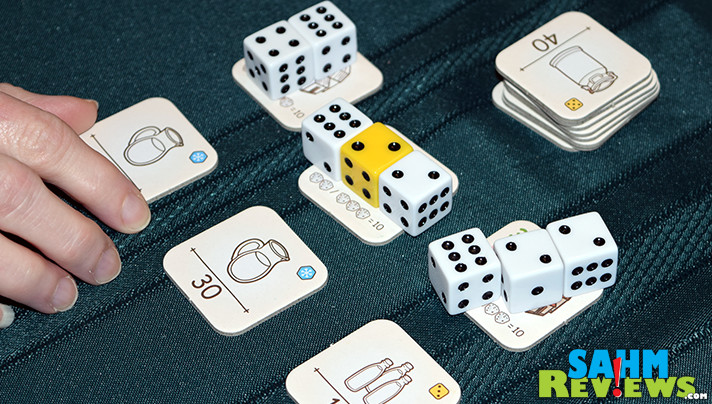 At any time you may elect to end your turn by spending the dice to purchase milk tiles. If you decide to continue your turn, you must at a minimum ‘bank’ at least one set of ten. If you are able to fill the first two barns, continuing on to the last barn will also award you with a freeze token – the game’s currency to be spent on other things. 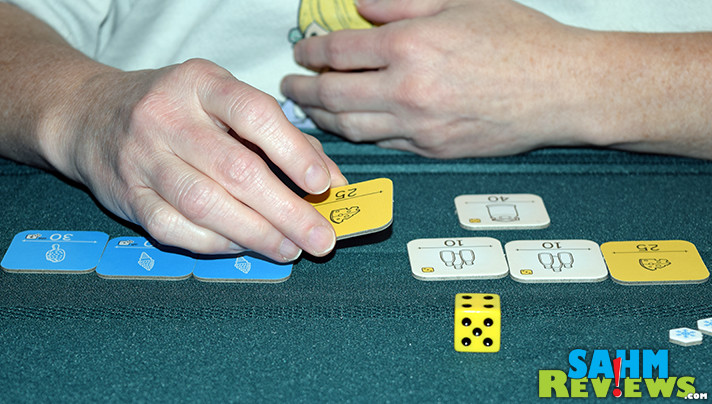 Each milk tile purchased has a special icon in the upper right of the card. This is the cost to flip the tile to the other side and will award either additional points at the end of the game or a special power to be used once per turn. The cost will either be a certain number rolled on the yellow die or payment of one freeze token. Any bonuses can be used immediately, but again, only once per turn. 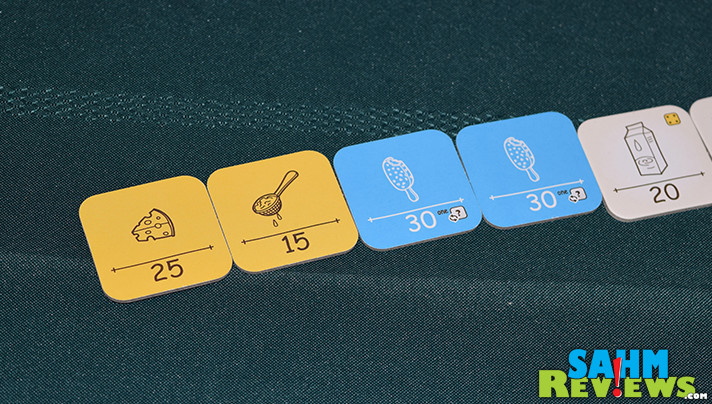 Freeze tokens can also be spent to lock your dice in place. There may be times that while re-rolling you’d like to increase your chances of getting the right combination. Spend one token per die to lock them (keep them on the same number and don’t re-roll) for the next attempt. 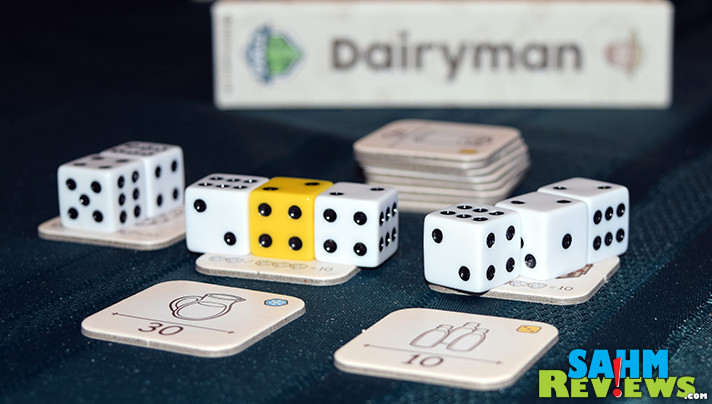 If you roll and are unable to supply the barn with a total of ten, you must take a backorder token. These subtract five points from your total at the end of the game if you still have them. But they also award you with an extra (red) die to roll during your turn! When the last backorder token is taken, all of them are returned to the supply. Then the person (or persons) who had the greatest number of backorder tokens must return their highest-valued milk order to the supply! Fortunately, any tiles that have been upgraded (flipped) to the other side to either ice cream or other dairy products are safe as they won’t spoil and can’t be returned!

Dairyman ends when there aren’t enough milk tiles to refill the display area back to three tiles. Add up the value of all tiles in front of you, subtracting for any backorder tokens in your possession. The Dairyman with the highest total wins the game!

Unless you live in the Chicago area, you probably can’t get milk delivered to your home, but if you pick up a copy of Dairyman it might just be the next best thing! Copies are on Amazon for under $15 shipped or at your local game store. Find out what’s next from Tasty Minstrel Games by watching their Facebook and Twitter feeds. 2018 is shaping up to be a banner year for them!

Would you love to be able to get your milk delivered?