When we shop for games, sometimes themes that are fantasy-based or are about topics that we’re unfamiliar with but would like to learn more (European history comes to mind) grab our attention. Other times we’re drawn to themes we can easily relate to. Games about dogs, long haul trucking in the Midwest or ones that are centered around music are all at the top of our list. But there’s one theme that speaks to our whole family since we’re based in Iowa – farming!

Games like Harvest, Harvest Dice, Agricola and Dairyman are instant-buys for us based upon the theme alone. Of course we’ve done our research ahead of time to make sure they’re quality products. That’s also the case with this latest farming-themed game we’ve been playing! And the backstory of Fields of Green by Stronghold Games closely matches exactly what our family experienced!

The story behind Fields of Green is that you have decided to leave the big city behind and move to the countryside to become a farmer. Just over a decade ago we made the same choice – to leave Los Angeles behind and move back to the area where we got married and raise our girls with what we knew, a Midwest upbringing. While we didn’t become farmers, we now get to enjoy the fruits (err, vegetables) of our backyard garden and regularly attend our local farmers’ market to get our produce direct from the growers! Plus we live in the metro area that is home to the headquarters for John Deere, so any game that centers itself around actual farming really hits home.

It is also appropriate that this simpler lifestyle is reflected in the ease of learning the game. While many games of this type take time to learn the rules, with Fields of Green we were up and planting in no time at all! I think it took more time making sure we had table space for our farms than going through the rulebook!

Setup is pretty painless with six stacks of color-coded cards representing different building/plot types and marked by included chipboard title bars. Piles of money, victory point stars and wooden goods are set within reach of all players and everyone receives a Silo card with one piece of food stores and a Water Tower card, filled to the top with water tokens. These are set in front of each player and are the basis for their upcoming farm.

Fields of Green is played over four rounds (years) and uses a fun draft mechanism. Each player begins the round by drawing six cards from the four main piles, making sure to utilize at least three of the types. A year will last for six turns, one for each card drawn. But the cards in your hand are not what you’ll get to use. Sure, you’ll choose one to play on your turn, but then you’ll pass the rest of your hand to the person on your left (or right, depending on the round) and will then choose from those new cards on your next turn! 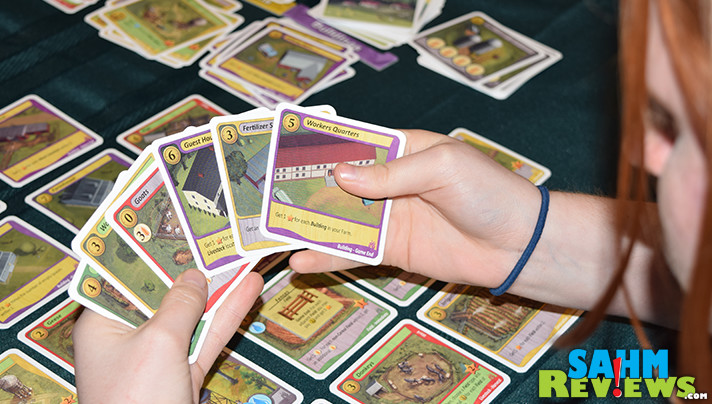 The card you choose to play can be redeemed in a few ways. You may elect to construct it on your farm by paying the price in the upper left corner immediately. The card is then placed anywhere in your farm orthagonally adjacent to another card. Some cards award instant benefits, which you read aloud and collect. Others will offer end-game scoring, which you’ll ignore until the end of the game. The most common are fields and livestock that will produce extra goods during the end-of-year harvest. 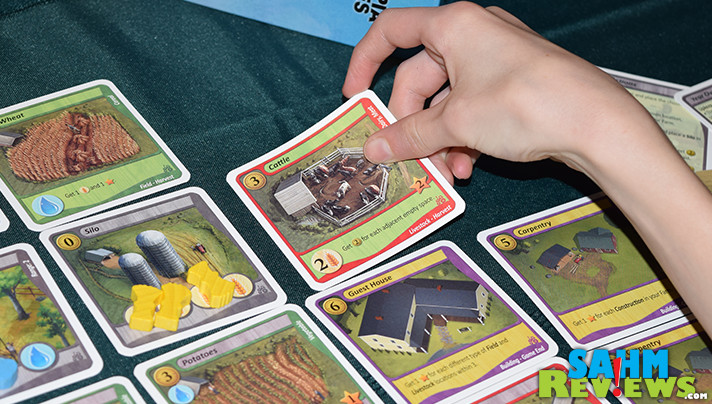 If you don’t wish to build what is depicted on the card, you do have other options. You may elect to Go to Market and discard the card and collect $2 PLUS sell up to two pieces of food at the market for $2 each. You can also build a new Water Tower for $2 since you’ll need to water your crops and can only transport the liquid gold up to two cards away. Or maybe you’d like to construct a new silo to store all that extra food you’ll be harvesting. Fortunately there is no cost for that, but Silos start empty while Water Towers begin full. A final action option is to discard the card and reactivate a turned-down location in your farm (more on this in a minute).

After six cards have been passed, selected and played, the year ends and it is time for harvest. Each of your cards that award some type of good during harvest usually requires a payment in order to be able to collect. For instance, if you are growing corn, you will need to water the fields. Raising livestock? Hopefully you have grown some corn to feed the animals! Each card must be paid for from your Water Tower(s) and/or Silo(s) before you can collect their benefits. Fortunately you can resolve them in any order, so your new corn crop can be immediately used to feed the cattle, assuming you have room in your Silo to store the corn temporarily. 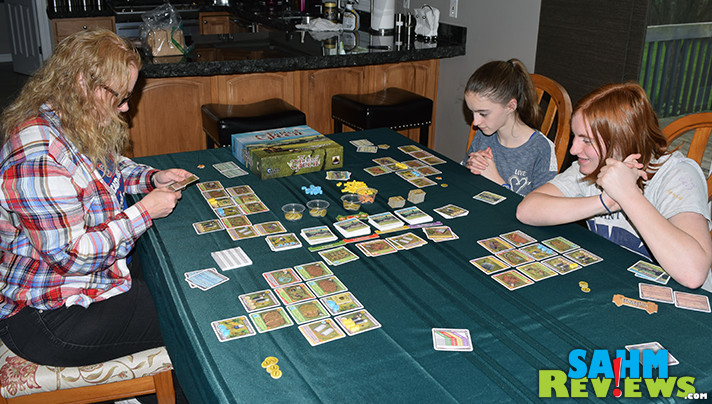 If you cannot or choose not to pay for a harvest, that card is then flipped over and is invalid until turned back over during a subsequent turn (mentioned above). Because cards give extra bonuses for positional placement, you don’t want to have invalid plots in your farm. Other cards will also award equipment tokens that add bonuses to corresponding cards. These can be the slight difference needed when comparing one farm to another!

After each harvest a new year begins. All players receive food, water and money to begin the new season. First player passes clockwise to the next person and the year token is moved to signify the beginning of the year. Card selection and passing changes with every year, so pay attention who you are passing potentially good cards to!

Over the four years your farm will grow and you’ll soon find yourself swimming in money and food, while still trying to manage your water usage. Fields of Green is a classic example of an engine-building game where you want to play cards that compliment each other (plant corn to feed the pigs, for example). After the end of the fourth year, final scores are tallied as follows: Add up any Victory Point tokens collected during the game as well as VP’s listed on any of your build cards. You’ll receive one point for every $3 left over at the end of the game as well as a point for every two pieces of leftover food. If you are efficient enough to completely empty a water tower, receive a point for each one of those! Add all of these to any points received from Equipment tokens or end-game bonuses listed on the cards and the player with the highest overall score is the winner! As you can see from our latest scoresheet, scores run quite close with our 15yr old daughter besting all of us! 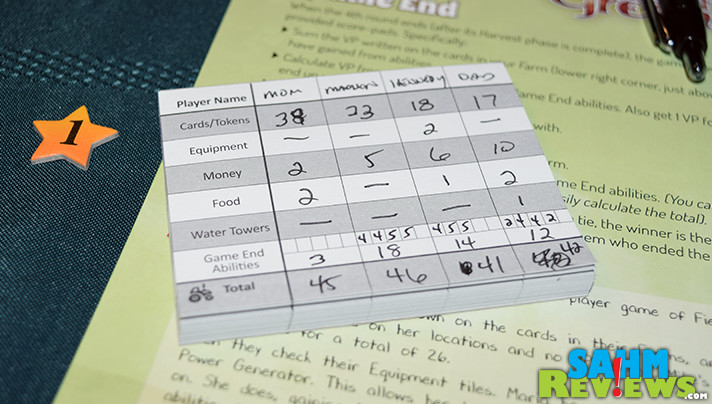 It doesn’t matter if you’re in farm country or not, Fields of Green should be on your game shelf. Easy to learn and teach, with a ton of strategy needed to be successful, you’ll find yourself going back to the farm season after season. Harvest a copy from Amazon for just over $30 shipped or ask at your local game store for a fresh copy. We have one more game in the works from Stronghold Games to feature over the summer, and if you’re a fan of the game we featured years ago, Village, then you’ll want to take a look at this new take on the same theme – My Village! Watch for it in a month or so! In the meantime, make sure you’re following Stronghold Games on Facebook and Twitter to find out what they’re releasing during this summer’s convention season!

When’s the last time you visited a farm?

15 thoughts on “Fields of Green Board Game Overview”