During a recent trip to Costco, we were delighted to see a demo set up for Fitz’s craft beverages. If you are familiar with the deliciousness of this brand then you probably understand our excitement and how we instantly opted to grab three cases to take home. If you aren’t familiar with them, you’re missing out. We shared similar feelings about products like Oberweis Dairy and our beloved local Whitey’s Ice Cream. What all these have in common is that they started small (and local) and have only found a foothold by people learning about them. The same holds true about board games. The big companies make the news, have a big footprint on store shelves and have the marketing budget to get their games seen.

Not everyone has that option but that doesn’t mean they don’t have something great to offer. Hence the inspiration for this article. We found 3 party games by 3 different small publishers that we feel deserve a little attention: Cult Following: The One True Game by Bravely Told Games, Say Whaaat?! from Drawlab and Dennis Hensley & Jeb Havens’ game, You Don’t Know My Life. I’m going to give you a brief game overview of each so you can decide if you want to place an order to go along with your Fitz’s, Oberweis and Whitey’s.

Cult Following: The One True Game

Several years ago we told you about Snake Oil and even boasted it as an awesome game for educators to teach improvisational skills and salesmanship. But we heard a lot of people say that finding it was a challenge. Well look no further because we have another solution! In Cult Following: The One True Game, players are vying against each other to recruit new people to their cult. Don’t worry, we’re not talking about scary or freaky cults. These are made up based on the cards you draw with no two ever being the same. That probably didn’t clear things up at all… I think an explanation is in order.

The game requires a minimum of three people in order to play and it takes place over a series of rounds, each with three phases. To begin, depending on number of players, two or three players take on the role of cultists and all remaining players are recruits. 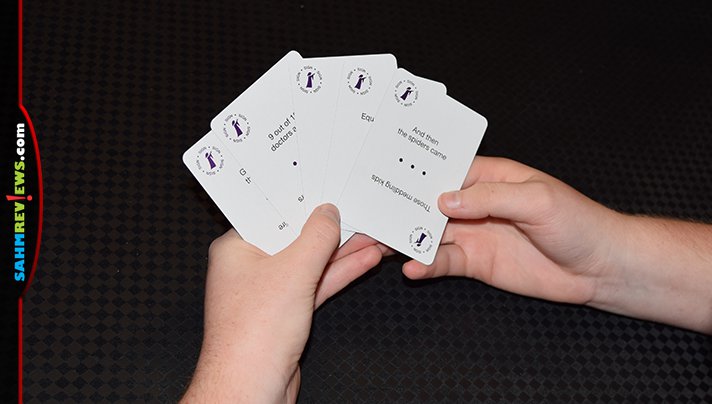 The cultists draw five “sign” cards and select three which will be used as the building blocks for their cult. At the same time, each recruit draws one card from the question deck. 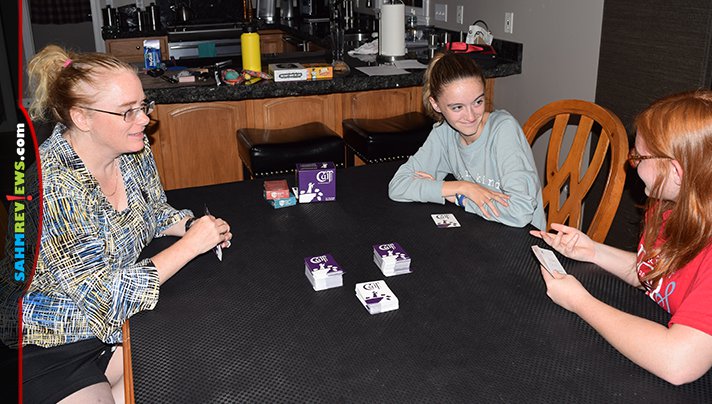 Next, the two cultists take turns formulating a cult based on the ideals as set forth in their cards. This is where players get to work on their improv skills as they craft a short sales pitch of why the recruits should join their cult instead of another. As they tell their story, the cultist reveals the related card to show that they’ve met the requirements outlined. 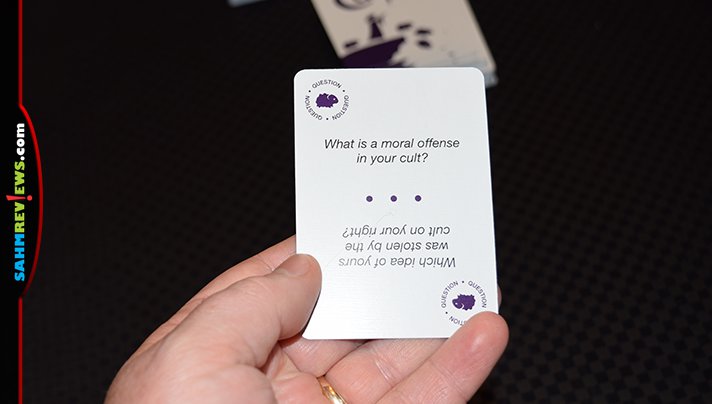 But like anyone who is venturing into the unknown, questions need to be asked! Each recruit takes a turn at asking the question on their card then each cultist is tasked with elaborating on their cult while answering the question presented. When all cultists have finished, the recruit gives their card to the cult of their choice to become the latest initiate! The recruits continue asking questions until one cultists has earned two followers. The process continues for as long as you want! There are a number of variations of the game as well as a few different game packs to really mix things up. You can be a founding member of your own cult by conjuring a copy of Cult Following: The One True Game on Amazon. Become the latest follower of Bravely Told Games through the lures of Facebook and Twitter.

There are numerous games on the market that have you trying to think like your opponents. Your goal in Say Whaaat?! goes beyond that in trying to also rank what the active player thinks is most or least important. 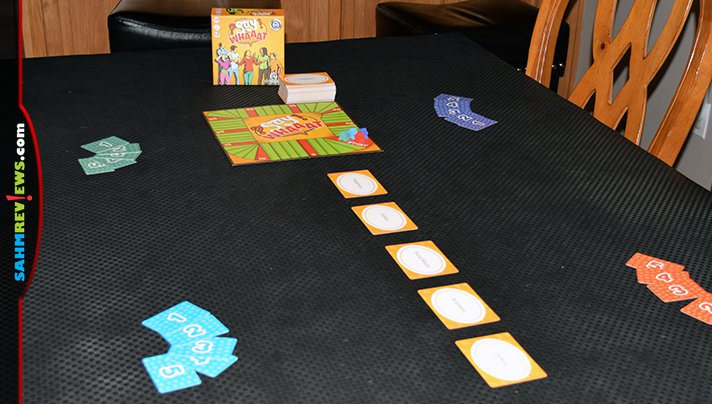 Before I go any further, I want to clear something up. No, this isn’t the same as what we described in our Most or Least game overview so let’s get it set up and go over it! Put the board in the middle of the table, have each player select a color and take the corresponding ranking cards and meeple of that color. Shuffle the deck of Word Cards and place it in the middle of the table. Done.

The active player is referred to as the Judge, but don’t worry about there being any kind of favoritism going on like in some games. The Judge will flip five Word Cards from the top of the deck and form a line in the center of the table. That person will then use their Ranking Cards to put the ideas in order by what is most to least important to them. The Judge places a ranking card face down beside each of the Word Cards. 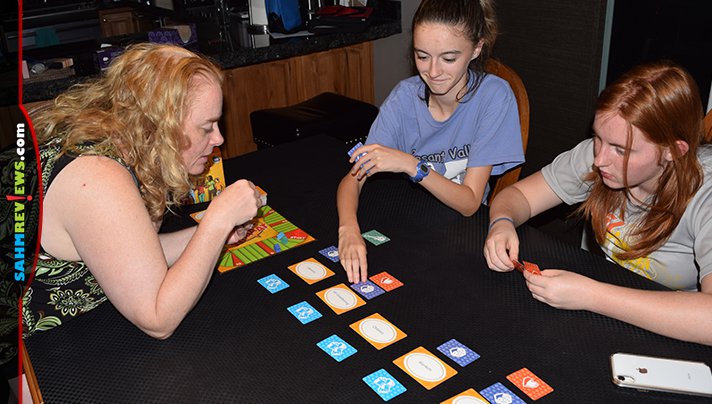 All the other players will then use their own Ranking Cards to try to guess what the Judge considered most or least important. After everyone has made their guesses, the Judge reveals their picks and each player scores one point for EACH card they match. The player who matched the most earns an additional point. 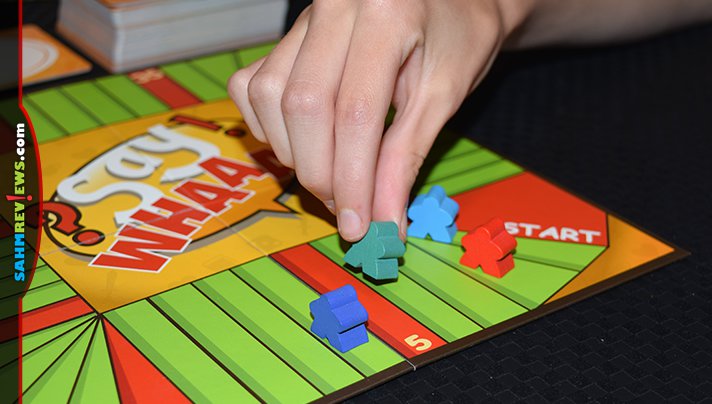 The job of judge passes to the next player and the process repeats. After one complete round, the victor is determined and you decide if you want to play again! It’s a quick game that may have you scratching your head at how people rank things, but that’s what makes us all individuals! If this sounds like your kind of game, pick up a copy of Say Whaaat?! on Amazon or direct from the Drawlab website. Follow them on Twitter and Facebook to see what else they’re putting into order!

You Don’t Know My Life!

I’ve been sharing all kinds of stories online for over a decade, but there are still a lot of stories that I’ve yet to share. Some simply haven’t bubbled to the surface while others are tucked away to protect myself from humiliation. I’m quickly approaching half a century old so sometimes it takes inspiration for me to remember things from long ago. You Don’t Know My Life! is just the kind of nudge my memory cells need! 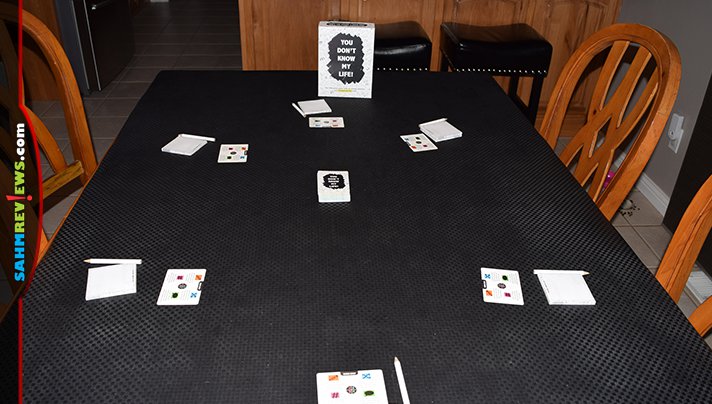 Gather together 5-10 people and hand each an answer pad, pencil and player card. Shuffle the question cards then hand them to the first player. This person will be the Reader for round one. 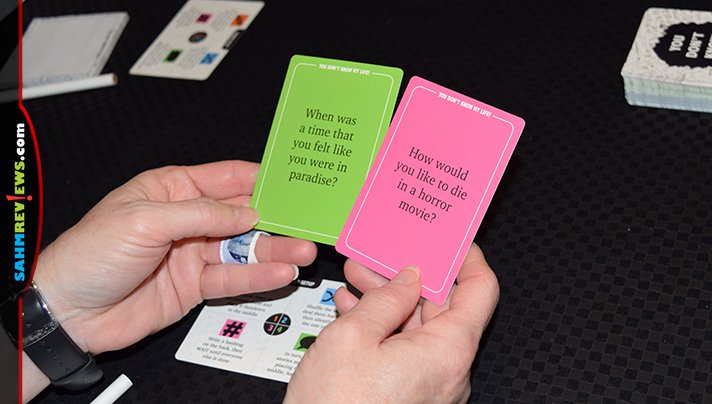 The Reader draws two cards from the top of the deck then decides which to read aloud. Then, all the players secretly write down a memory, feeling, anecdote or whatever to correspond with the question then places it in the middle of the table. Don’t worry, there isn’t any voting here either. 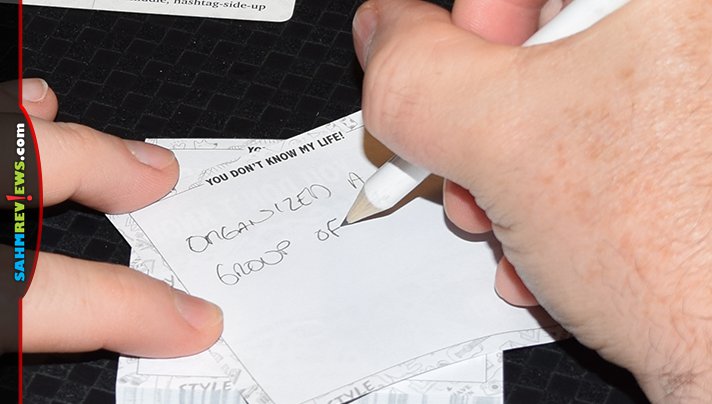 Once all the answers have been completed, the Reader gathers all the papers, shuffles them then randomly redistributes one piece to each player FACEDOWN. Players then take a moment to read the answer and sum it up with a clever, creative or witty hashtag. Once everyone has completed this latest assignment, the Reader repeats the original question. Players take turns sharing the story they received followed by their related hashtag. They finish by placing it in hashtag side up in the center of the table. Now we move to the interesting part…

Beginning with the Reader, it’s time to try to guess which story goes with which player. But players have to remember the story based on the hashtag! The Reader selects a story then says who they think wrote it. If they’re right, the player says, “You DO know my life” and they get to keep guessing. If not, the player says, “You DON’T know my life!” and play passes to the left. This process continues until each story is matched up to a player. The game ends when everyone has been the Reader an equal number of times. The person with the most correct answer sheets wins! It’s a game about story-telling, but it needs to be built on honesty. Not only is it excellent for an educational setting to teach public speaking and creative writing, but it’s also would work as an ice breaker. The game stemmed from interviews Dennis Hensley as an entertainment journalist so we know it works in an interview setting! Share your stories with You Don’t Know My Life on Facebook then pick up a copy of the game on Amazon for your next party.

All three of these are party games, but would also work in a classroom setting. Just because they’re small publishers doesn’t mean their games don’t have big potential!

What’s a product that you think is overshadowed by larger competitors?