I’m starting to feel like I should have officially declared this week to be Small Publisher Recognition Week. We highlighted three party games from small publishers on Monday and here we are today getting ready to talk about three card games from another small publisher, Gamely Games. It’s a constant reminder that consumers should research to find games that meet their interests and the dynamics of the people they like to game with.

It’s so funny when one of us is trying to tell a story and we say something like, “then the car went ca-clunk”. Almost without thinking, Scott will say something like, “How did that go again?” Then we’ll repeat it and halfway through a second (or third) time realize that he heard us perfectly fine, but wanted to hear us make noises as part of our explanation. If you’ve ever been in this kind of predicament then you’re ready to play Soundicous. Anywhere from 3 to 10 players can participate so gather your friends and make some noise! 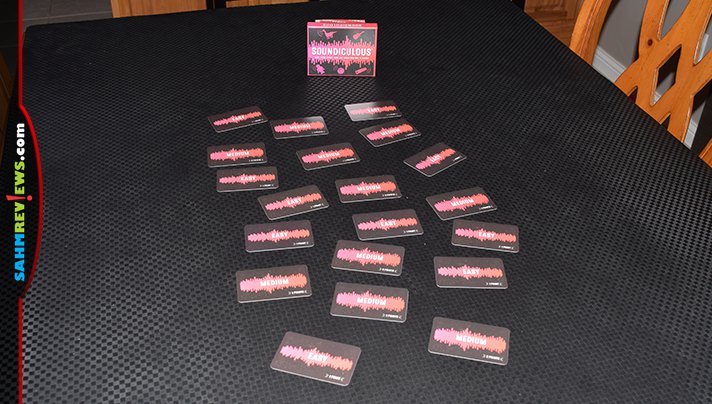 Select five cards per player in a mix of easy, medium and hard. Decide who will be the first player along with whether you’ll be utilizing the right or left side of the cards. There isn’t a difference, it just allows you to get more non-duplicated life out of your game. Place all cards in the middle of the table face down. 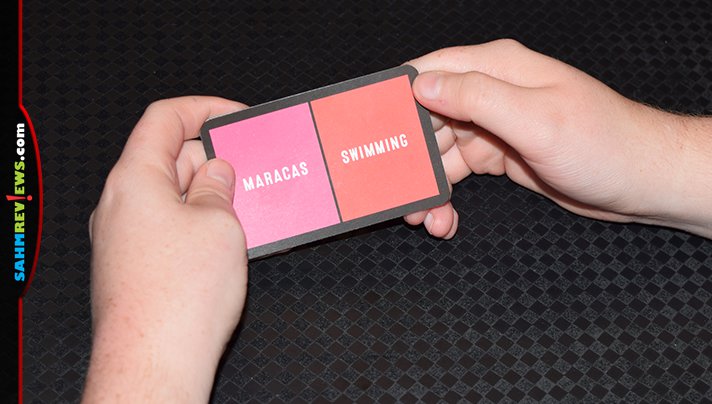 The first player selects a card, reads it then sits on their hands. Using only sounds, the player tries to get someone, anyone, to guess what the word is. Opponents can blurt out multiple answers but the only thing the active player can do is nod if they’re close.

As soon as someone guesses correctly (or half the players give up) then the turn is over. The active player and whomever secured the correct guess each earn 1, 2 or 3 points based on the card’s difficulty. Play passes clockwise and the process continues until all cards are gone. The player with the most points wins.

One of the downfalls about games like Soundiculous is that some people don’t like feeling like they’re embarrassing themselves. With Randomise, the choice of how to play is put squarely into the active player’s hands. Instead of sounding out words, you’re trying to get players to guess a jumbled up phrase or action.

Split into two teams then shuffle each deck (A, B and C) and place the stacks in the center of the table. Have a stopwatch or phone to keep time along with a pen and paper for drawing. One player from the active team decides if they’re doing a hard or easy challenge then opts to either describe, act or draw as their form of communication. 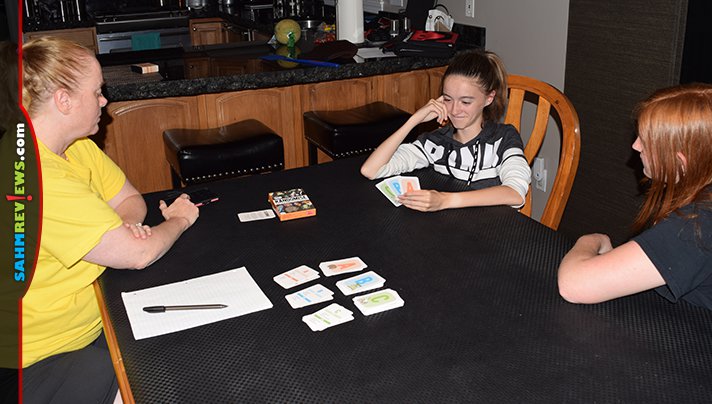 If they choose to describe, they’ll have 30 seconds to get their teammates to guess the combination of the three cards using only words and descriptions. If they opt to act then the timer is set for 60 seconds and they’ll use body language to achieve the same goal. No noises, pointing or props of any kind are allowed. If drawing is more the player’s cup of tea, they’ll use 90 seconds to pull the answers from their team.

Teams earn one point for each correct portion (A, B, C) in addition to bonus points of 1 or 3 (depending on difficulty level chosen) if the team gets all three! In the event they’re unable to do that, the opposing team is allowed one guess to steal the bonus points. The first team to reach 30 wins!

We all know how I feel about games like Escape from the Aliens in Outer Space or Captain Marvel Secret Skrulls that require me to have a poker face… They find their way into our gaming life and one of these days I’ll surprise everyone by totally faking them out. The Pretender is the latest opportunity to practice my skills in deception. 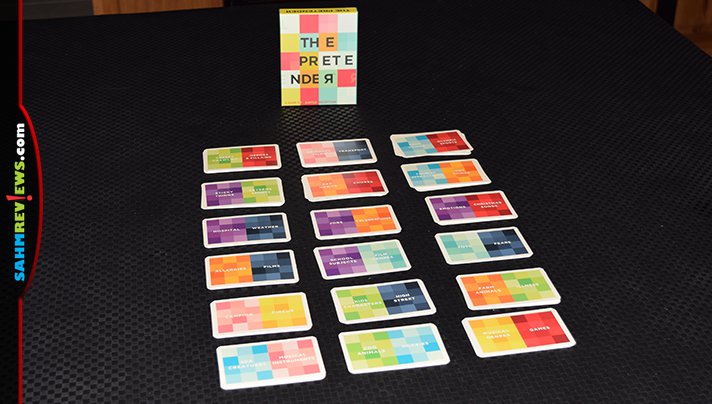 To begin the game, cards are sorted by category and laid on the table face down. Select a category then take the one Pretender card along with enough additional cards to total the number of players. Shuffle the stack then hand each player one card. This results in one player having the Pretender card and everyone else having cards with words. 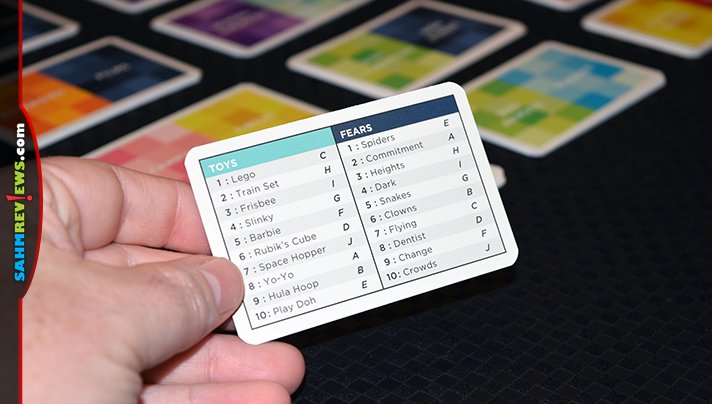 The first player to shout out a letter or number on the card is the active player and everyone will need to act out the word corresponding with that letter or number. But not completely. Just one small charade then it moves clockwise to the next player to do the same. Here’s the hitch: The Pretender doesn’t know what the word is and will have to try to fit in with the crowd by making some small charade as well. 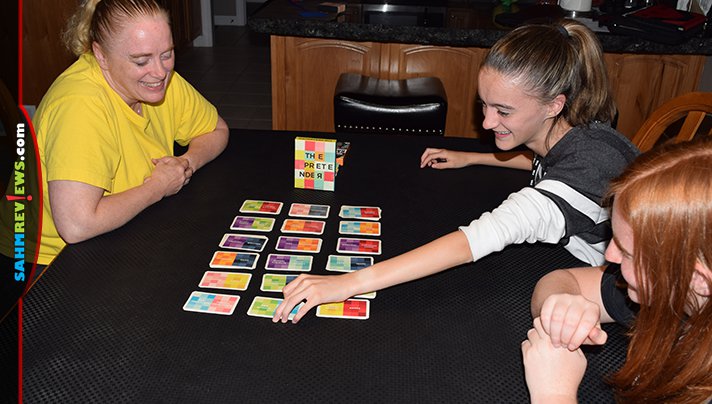 After everyone has done one charade, accusations are made to try to catch the Pretender. Once everyone agrees, a vote is made and on the count of three everyone points at another player. The player with the most votes reveals their identity. If it’s the Pretender, that person is caught and everyone else receives a point. However, if the Pretender is able to identify the item on the card, they win. In addition, if they remain undetected, the Pretender wins the round. Play a predetermined number of rounds and at the end, the person with the most points wins.

Copies of Randomise, Soundiculous and The Pretender are available on Amazon for under $15 each. While The Pretender is designed for 4-6 players, the other two are perfect for larger groups. With compact packaging, these are easy to tote along when traveling or attending an event. Read more about their games and charity initiatives by checking out the Gamely Games website or visiting them on Facebook.

Which of these three would be your first choice to play?